The Royal Pavilion in Brighton is just a stunning building. The juxtaposition of this India-inspired building being in the English seaside resort of Brighton makes it all the more wonderful. You can enjoy a peaceful walk around the gardens to get to the entrance, which is around the back. Definitely head to the large expanse of grass in front of the iconic frontage of the pavilion for pictures before going in. The frontage is so picturesque, and offers great options for the photographers amongst you. 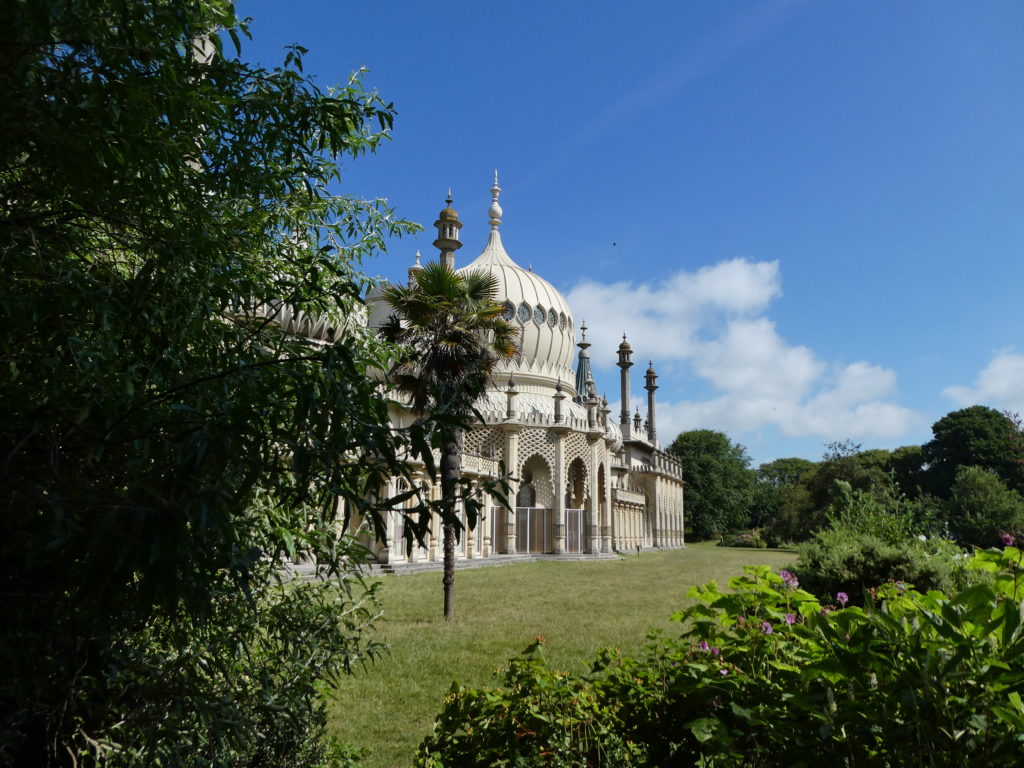 We had great fun with the small pond by the wall. The reflection of the building’s dome in the water looks amazing. We took it in turns to do star jumps for photos. Amy was hysterical about a face that I pulled whilst doing a star jump. I look like I’m in agony, being stretched on an invisible rack! 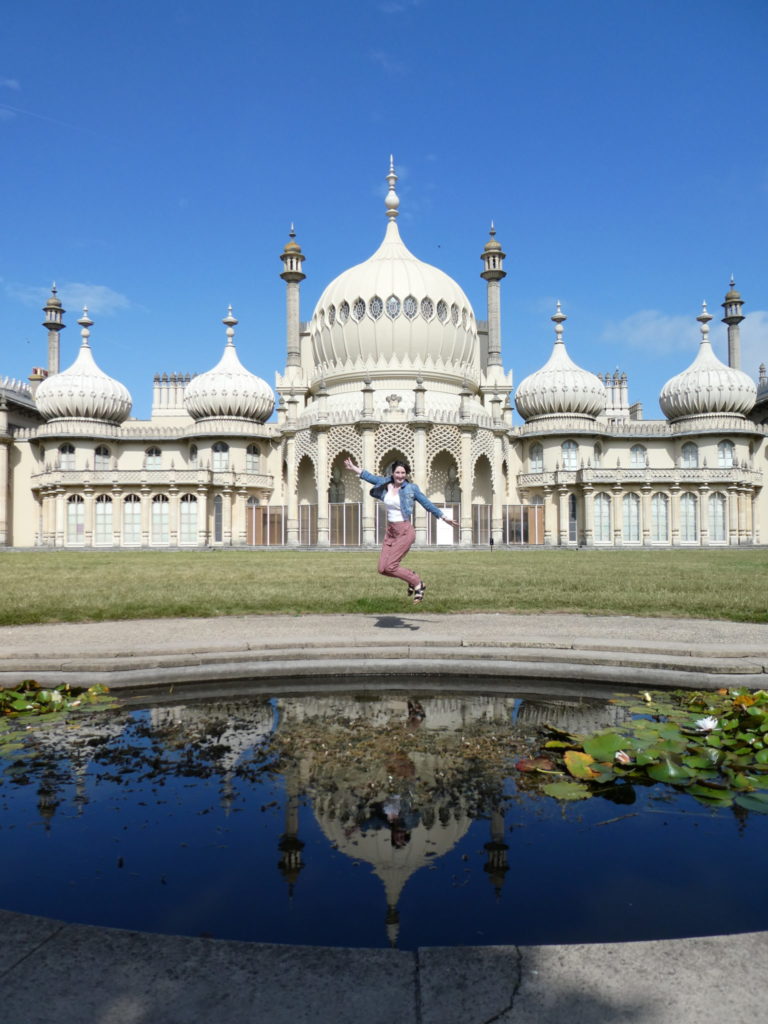 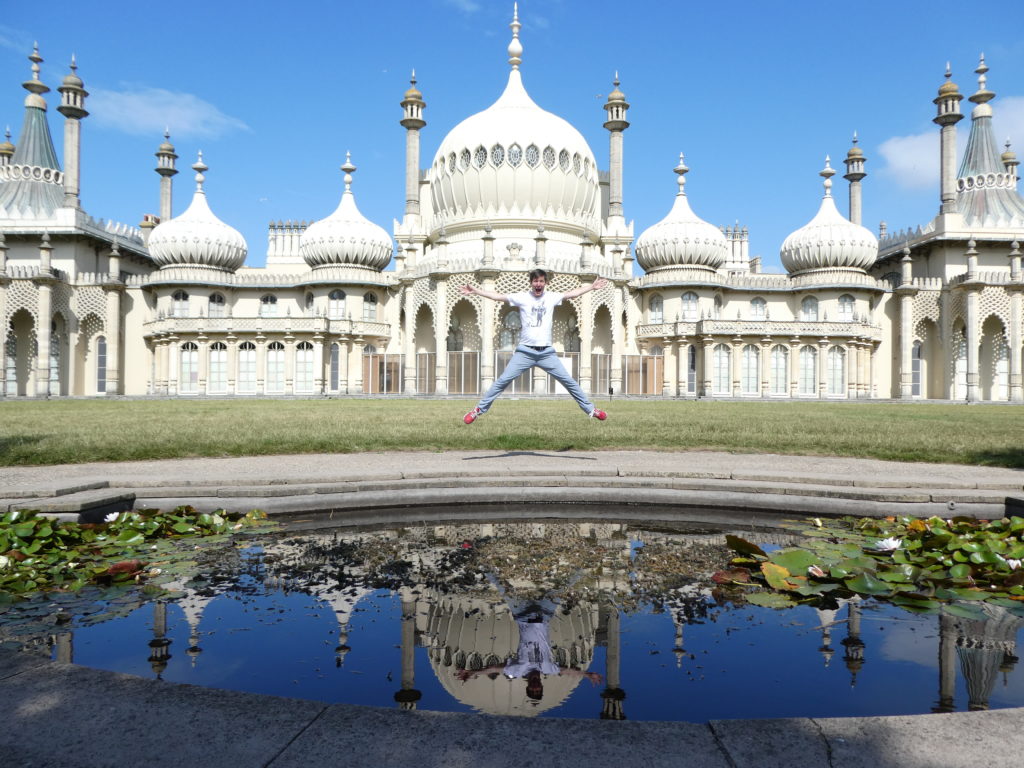 The Royal Pavilion is a remarkably exotic building. It was built for George IV as his summer palace in the style of Indian architecture, despite the fact that he had never been to India. The audio guides add a lot to your visit, so are well worth getting. With the remarkable exterior, we were already expecting to be wowed by the interior. However, even we weren’t prepared for the total contrast, yet complete exoticism. Indeed, despite its Indian influence outside, the inside is reminiscent of the Far East. A chinoiserie style is prevalent in all of its decoration. 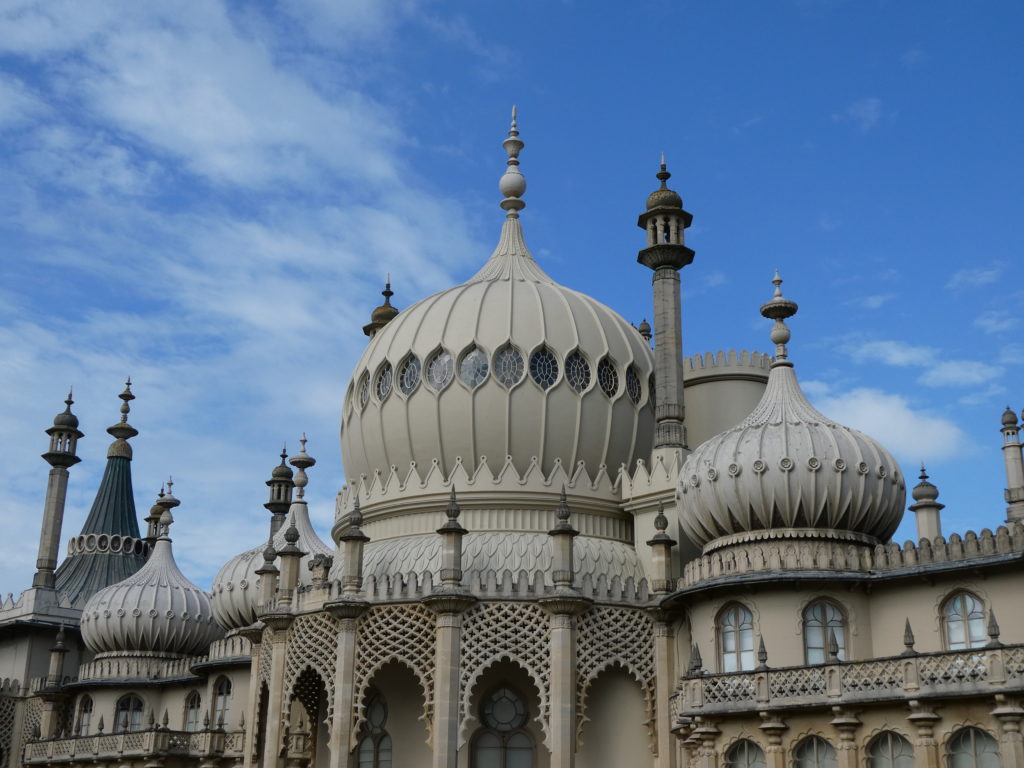 King George IV was the Prince of Wales when he commissioned the Pavilion to be built. He already knew Brighton well. He was somewhat of a hedonist, who enjoyed the company of many women and ate himself to health problems later in life. His taste in architecture was just as extravagant. Originally, it was built in a neo-classical style, before famed architect John Nash transformed it into the dreamy Indian palace it is today. 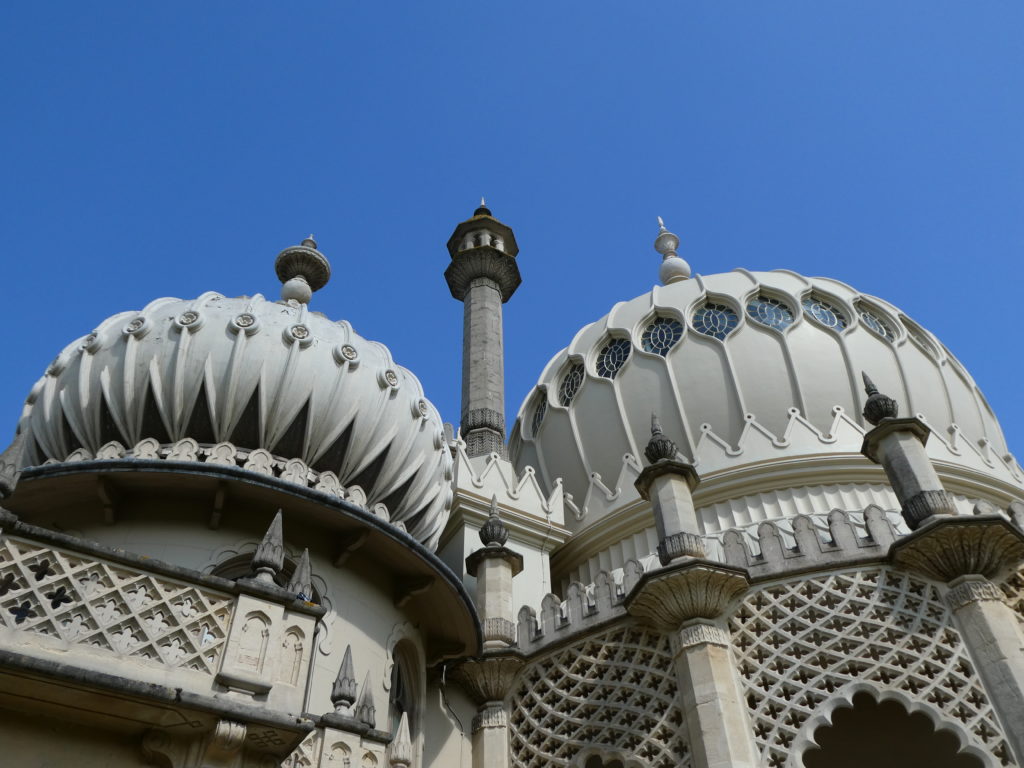 The entrance hall contains lots of natural light. Mirrors above the doors give the room an air of grandeur and an almost disorientating quality. The Long Gallery is the first real ‘wow’ moment, however. Here, you will find the most ornate versions of the nodding dogs you see in the back windows of cars you will ever see, in the form of large figures of Chinese court officials. Long not just in name, the room is filled with bamboo. The bamboo is both real and imitation, which has been very cleverly done. 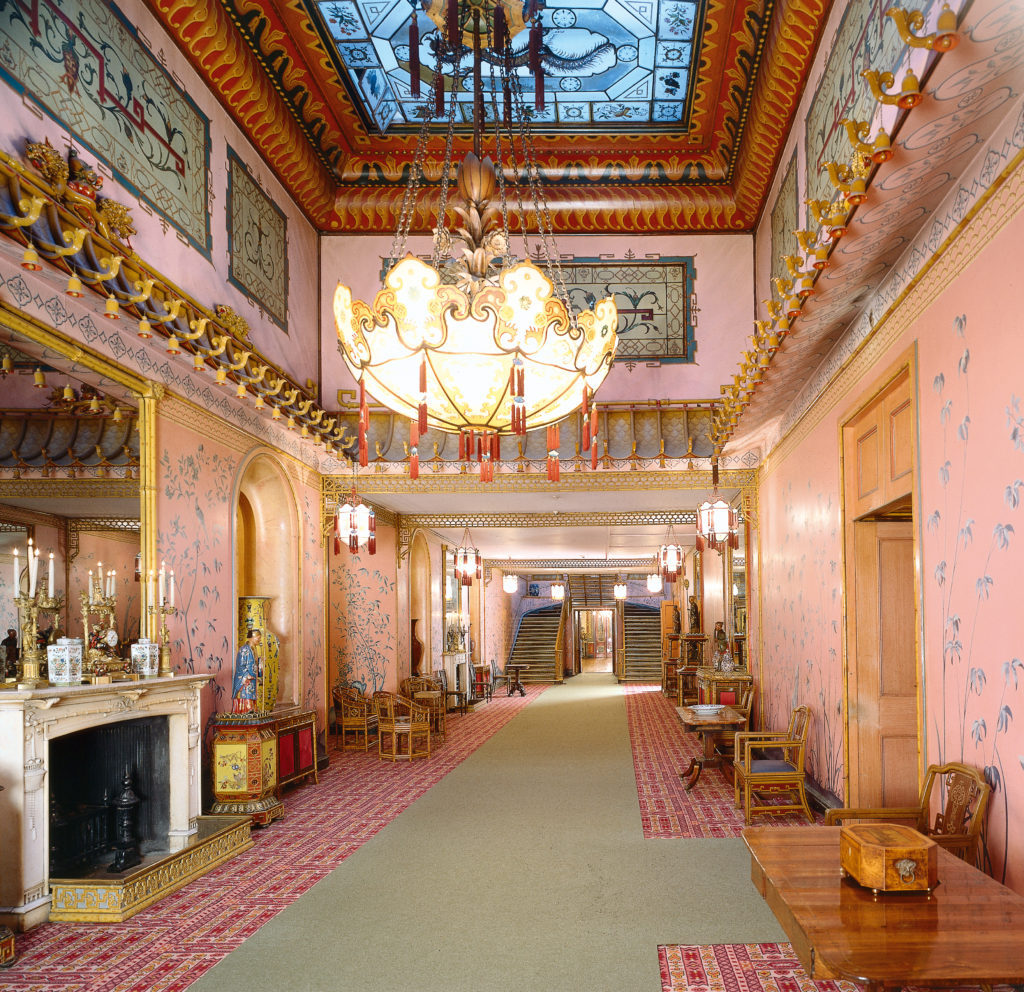 The most impressive room in the house for us is the Banqueting Room. This room is worth the admission price alone. It is hard not to gasp upon entering, and seeing its glorious chandelier, held in the claws of a huge dragon who is suspended from the ceiling. Above him are large leaves, some painted onto the ceiling itself, whilst others are stuck on, giving a 3-D impression. 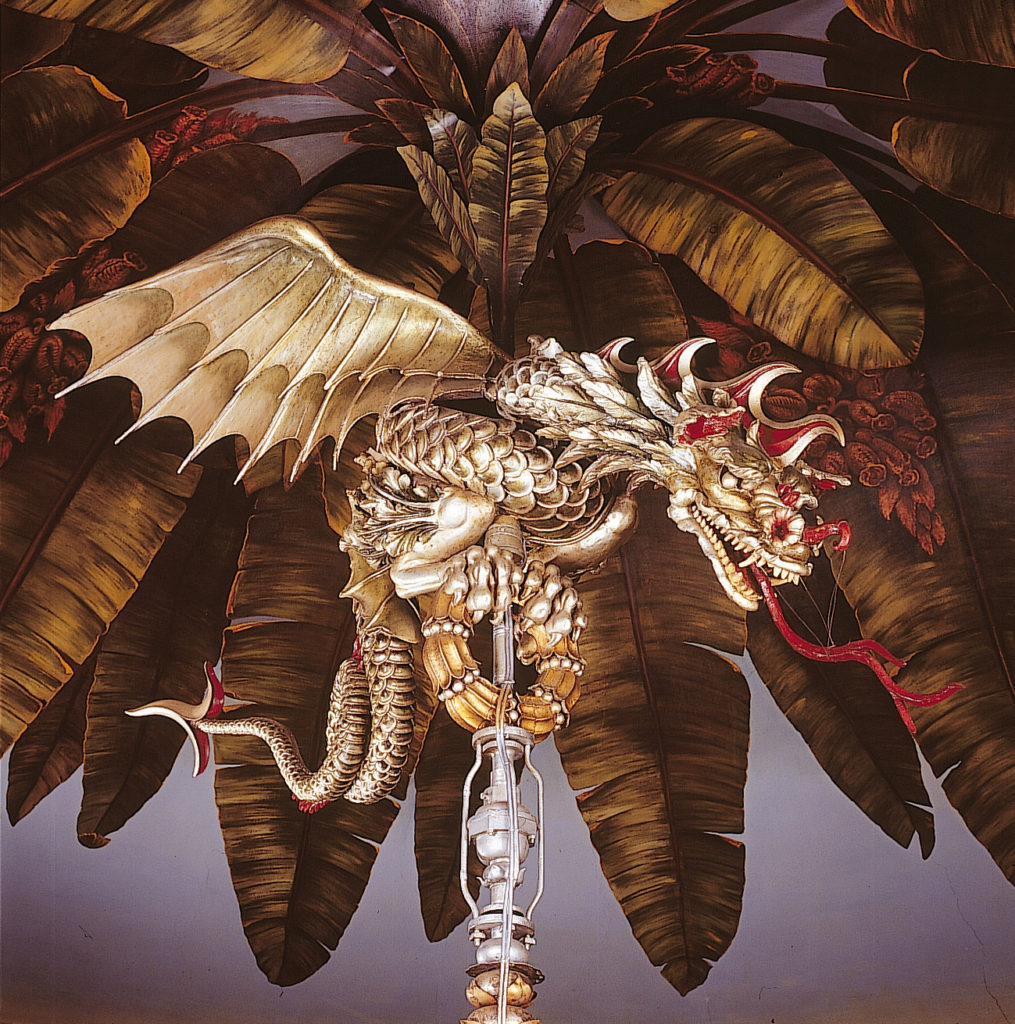 The chandelier apparently weighs a ton, which must have been a worry for those dining underneath it on the grand dining table. Stoke-on-Trent had a hand in this grandeur, with beautiful Spode china lamps around the room. 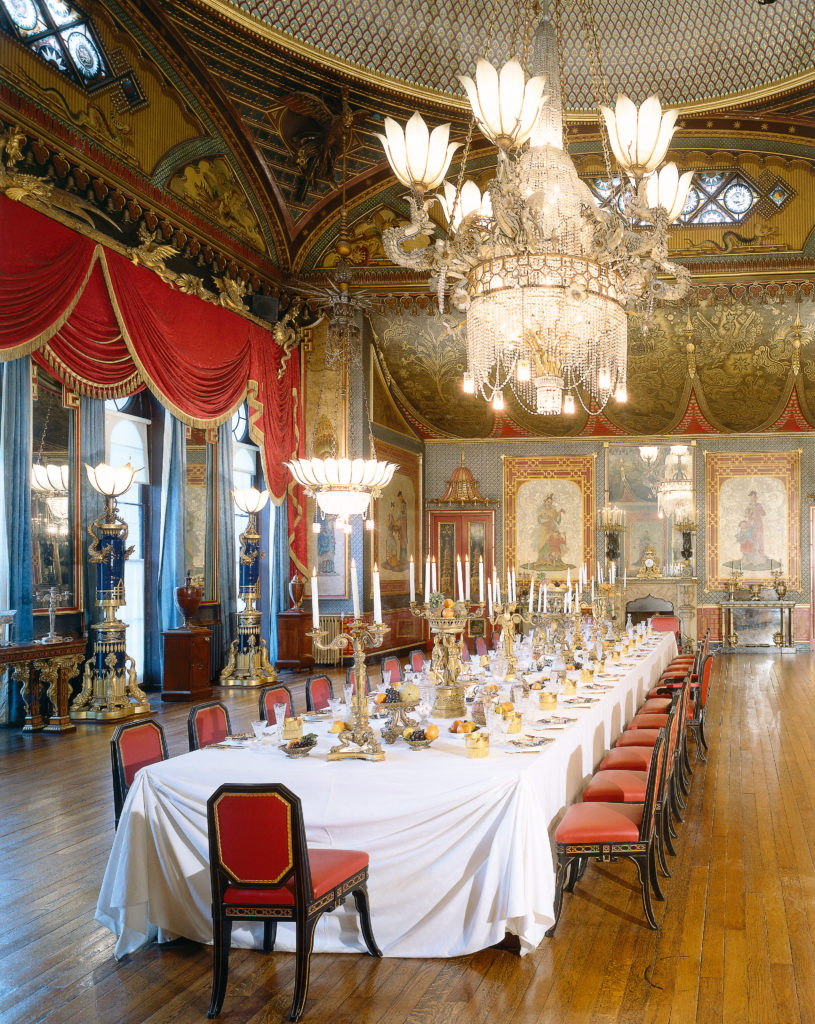 Sumptuous feasts were the order of the day here

Unusually, the Great Kitchen is right next door. Usually, the kitchens in grand homes such as this are hidden away from view. However, George was apparently so taken with it that he often invited guests into it to admire its mod cons. A menu was displayed for one of the feasts that was held here. Put it this way, it was more extravagant than even Mariah Carey could dream up. Even the kitchen has exotic decorations, with the columns disguised as palm trees. 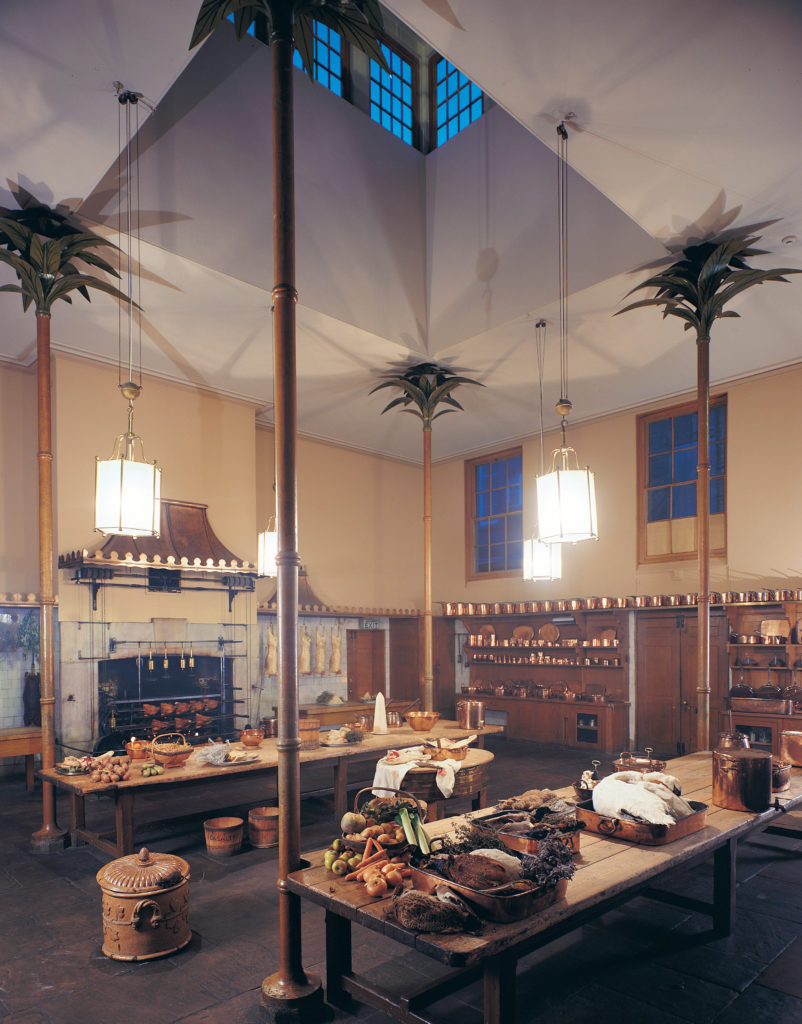 A gallery adjoined the Banqueting Room on the opposite side, into which guests would retire for games, drinking, and dancing. The opulent furniture has a dolphin theme, and is like something out of a Regency period romantic movie. Unfortunately, the Saloon is currently closed for refurbishment, but you can still listen to the audio guide from outside it. 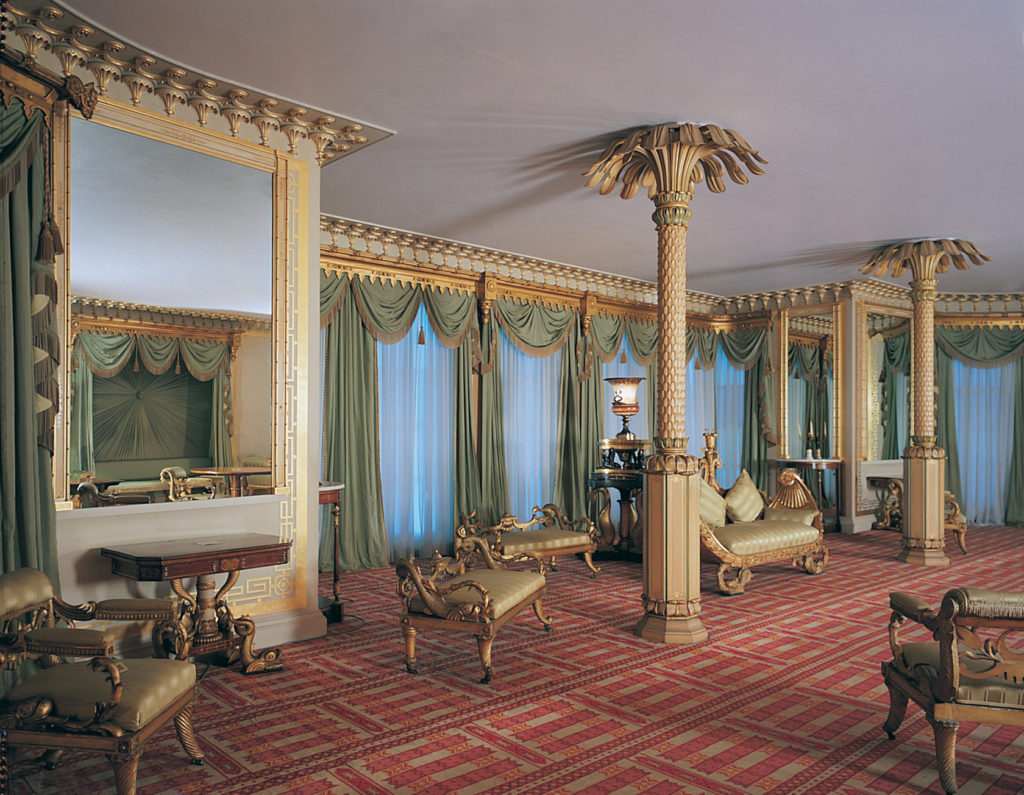 Another remarkable room with the wow factor is the Music Room. Its gold and red colour scheme really do make it feel like something special. This room has had its fair share of bad luck, being victim of an arson attack and a storm. However, it has been sensationally restored. The ceiling contains hundreds of cockleshells, and we spent ages just staring in awe. 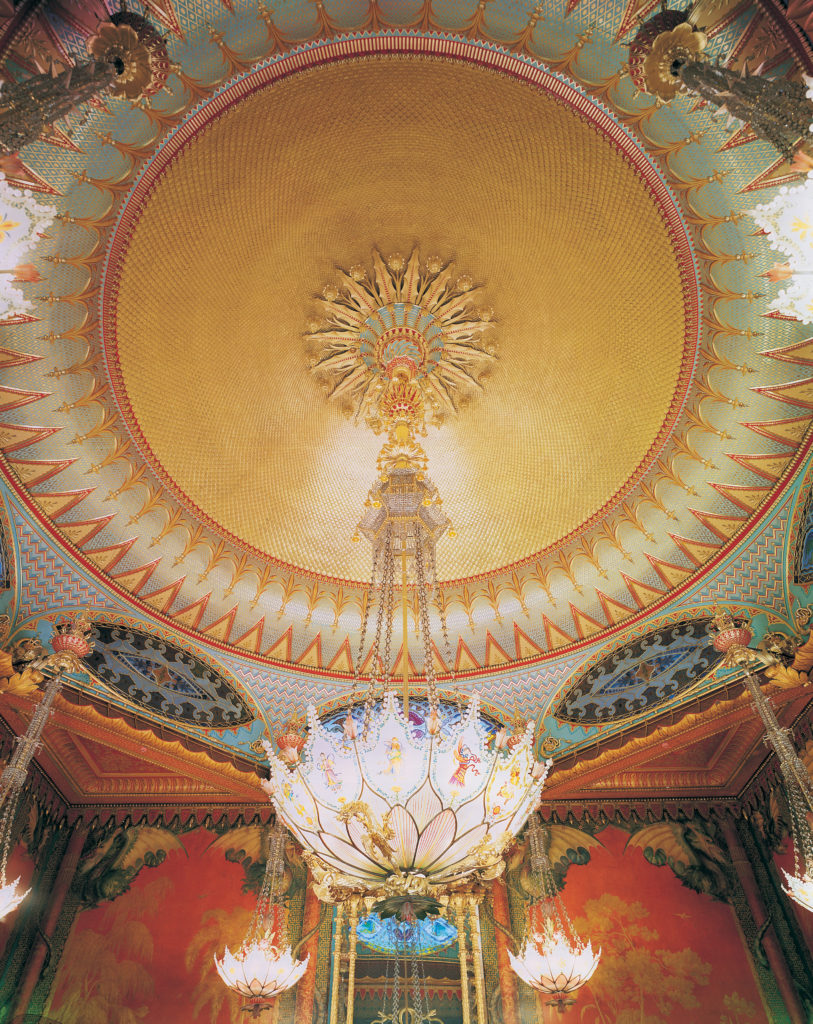 A school group came in, and were being shown how ladies used to use fans to signal whether they would like to dance or not. However, most of the kids were just happy playing with the fans rather than the educational part. The lady doing the talk was very engaging, however. 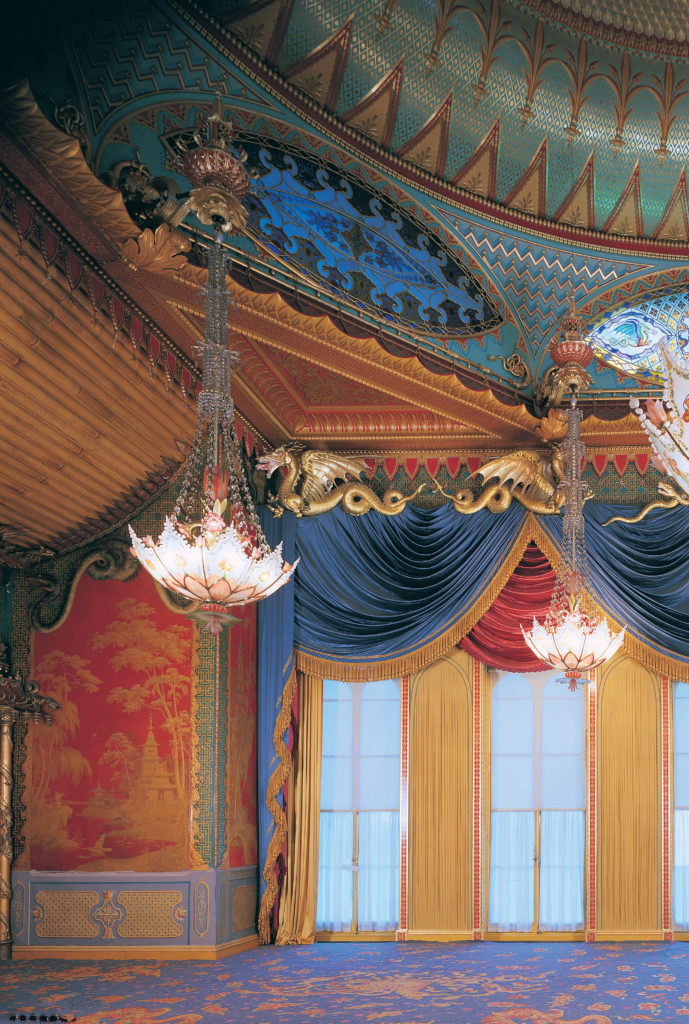 From here, we entered the King’s Apartments. They are unusually on the ground floor as a result of King George IV’s weight and health problems. The bed is the one from Windsor Castle that he died in. We headed upstairs where there is an exhibition on the history of the Royal Pavilion, and a collection of caricatures that were done of George IV. Most of them are very unflattering. Don’t miss the chance to at least admire the view from the balcony of the Tea Room, whether you eat there or not. 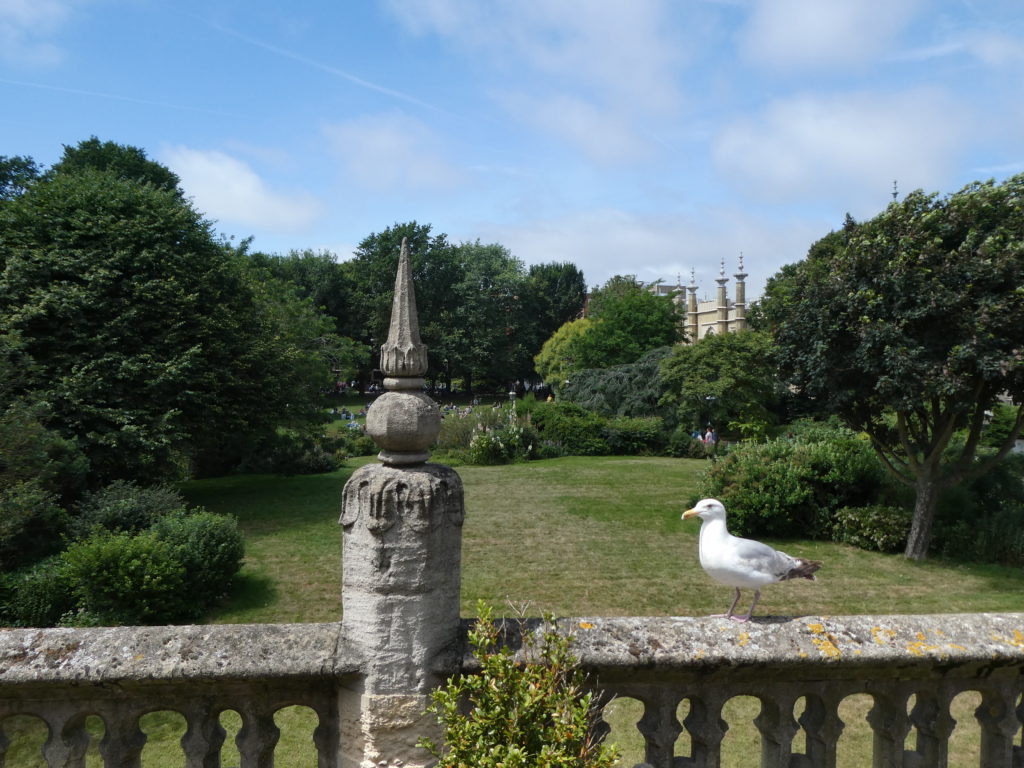 Upstairs are more bedrooms, including those of George IV’s brothers, who were the Dukes of York and Clarence. The beds in these rooms are draped like four poster beds, yet are single beds, which is rather unusual. Interestingly, Queen Victoria’s Apartments are able to be visited. Victoria was George IV’s niece. Whilst she visited Brighton on numerous occasions, she never took to the lack of privacy afforded her in such a prominent location. 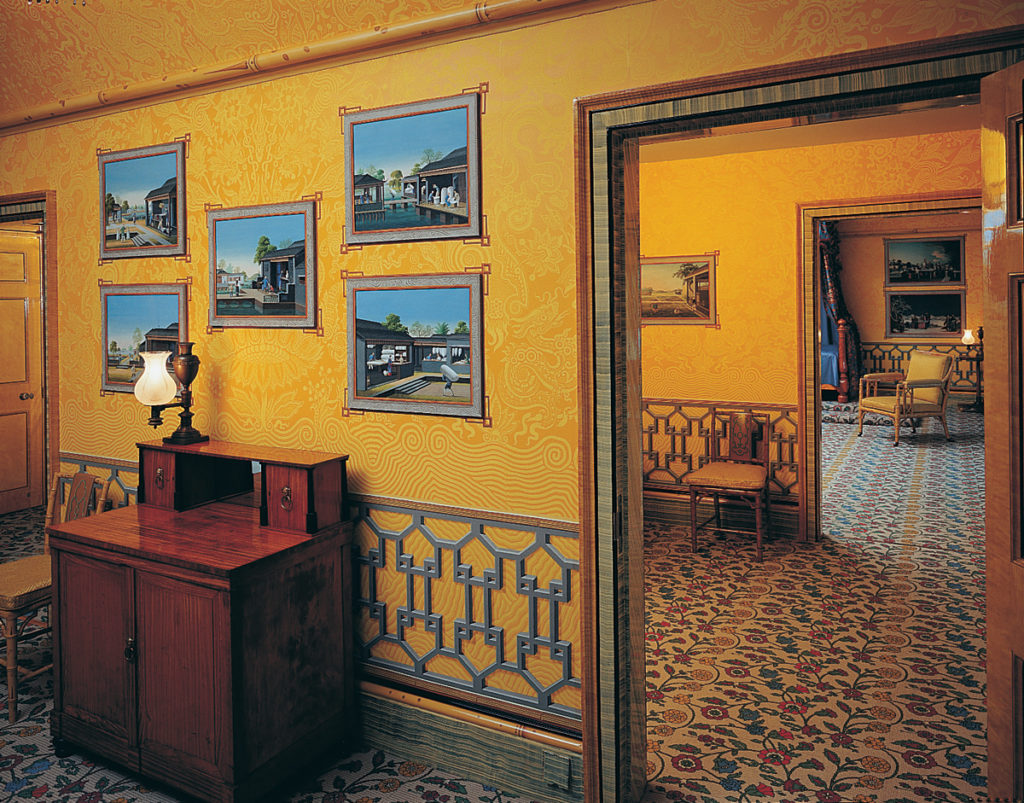 Queen Victoria sold the palace to the town

Yes, Victoria actually did sell the Royal Pavilion to the town of Brighton, making it the only Royal palace not still owned by the Royal Family. She did, however, strip it of anything valuable inside first of all. However, much of it has been returned to the building since then. Indeed, the fact that it was placed in storage in the Royal collections for so long has meant that it has survived remarkably well. You can see on her bed that there are no less than six mattresses! 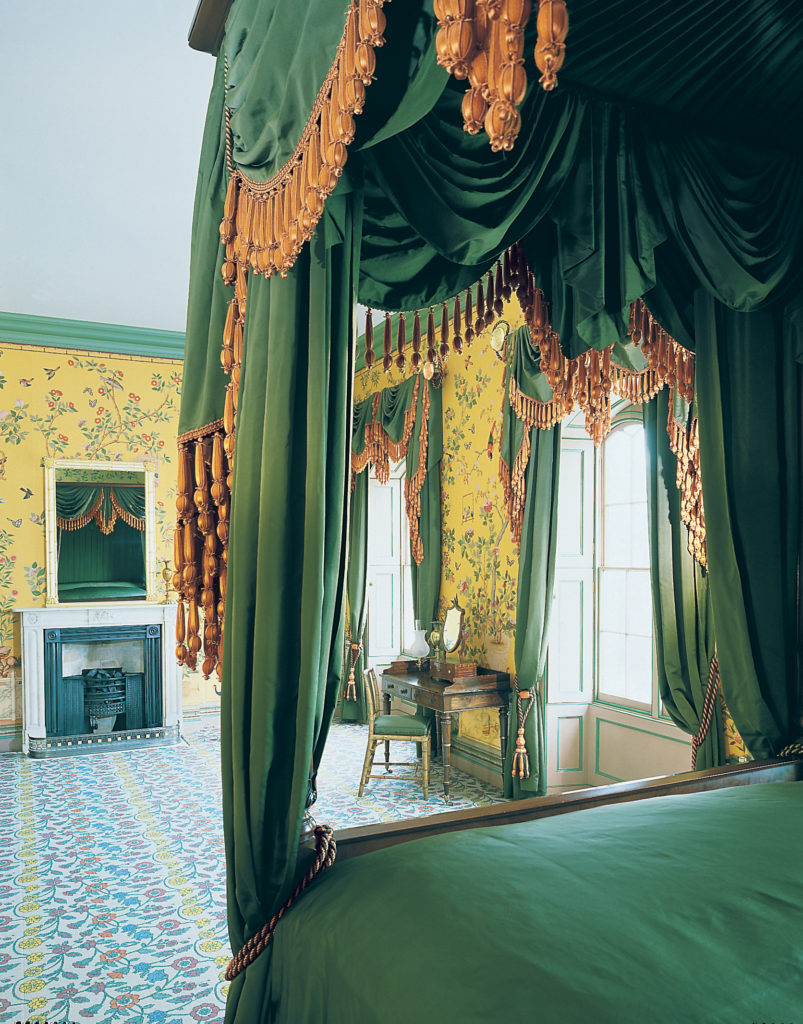 Jane Austen by the Sea: a temporary exhibition

The only other room available to visit upstairs contains temporary exhibitions. At the moment it is Jane Austen by the Sea. Although Austen had no known personal links with the town, it often featured in her books, such as Pride and Prejudice. Brighton was often described as a fashionable watering place. The exhibition is free with admission, and contains many fascinating artefacts. 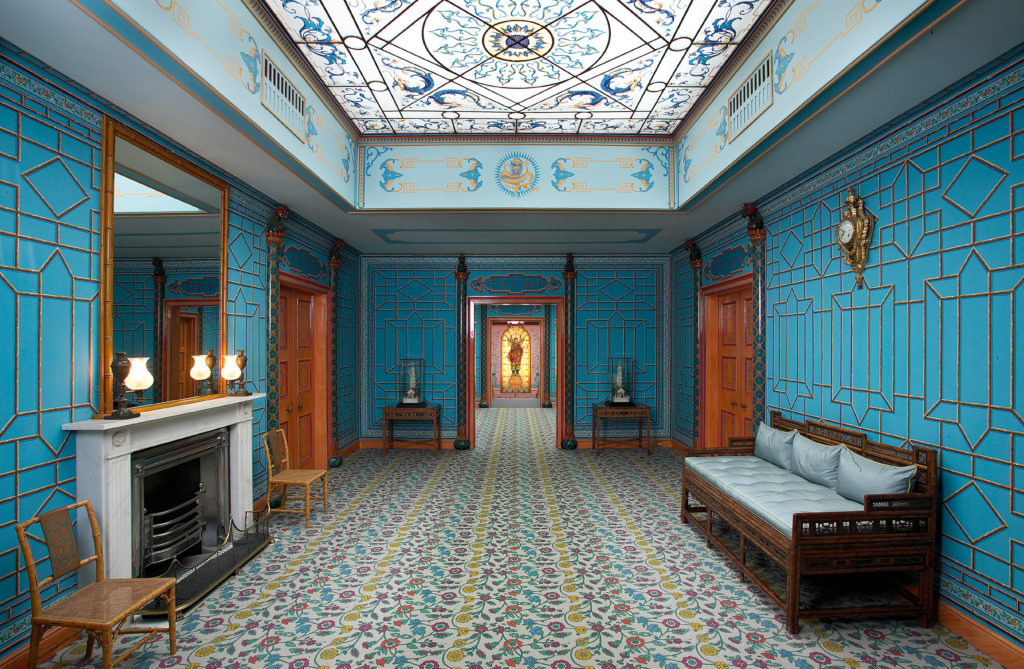 Austen was a favourite of King George IV, though apparently the feeling wasn’t quite mutual. Despite this, ‘Emma’ was dedicated to him. George’s personal copy is on display, along with a lock of Austen’s hair, Regency costumes, and quirky little caricatures. The exhibition is a great fit for the Royal Pavilion, as the romance of Austen’s novels is almost brought to life here. It is well worth visiting. 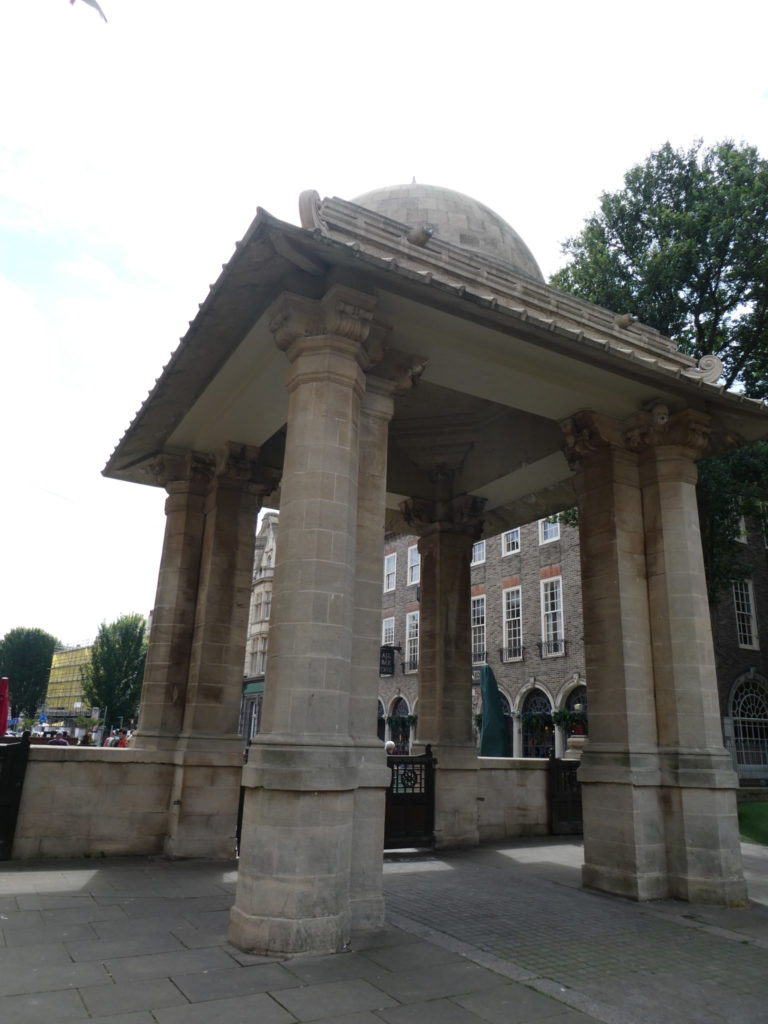 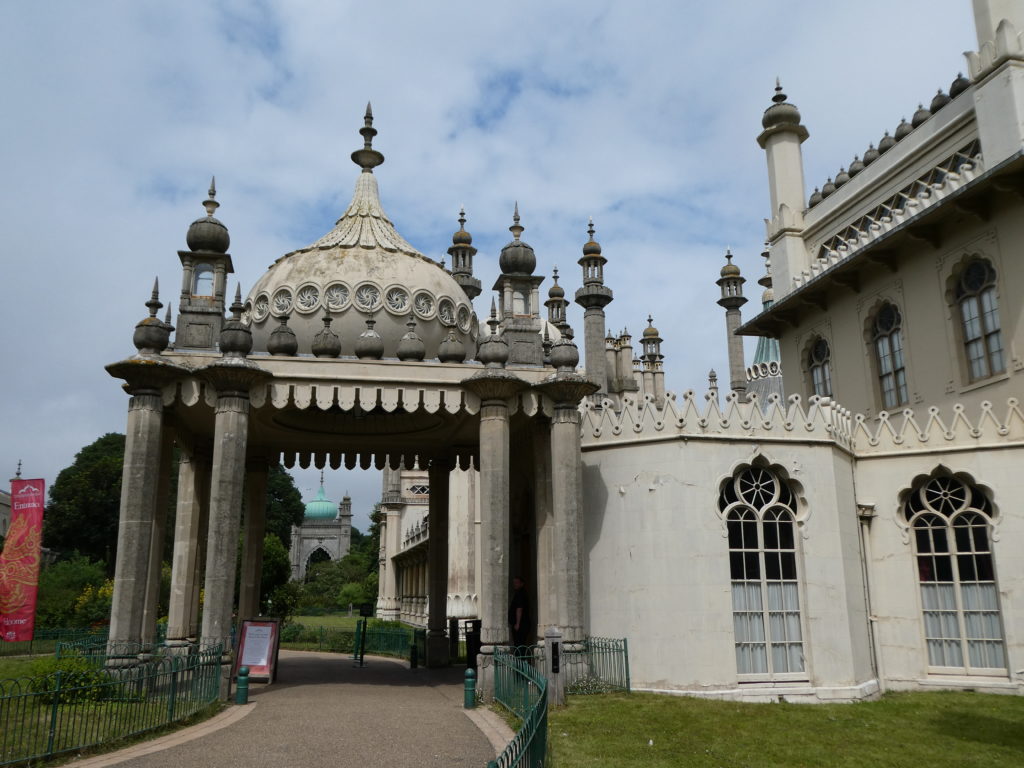 Have you ever been to the Royal Pavilion? What do you think of this remarkable quirky building?

Thanks to Brighton Museums for the use of the images of the interior, since photography is not allowed inside. All exterior images are our own.