Our ‘local’ cathedral isn’t bad at all!

Lichfield Cathedral is our ‘local’ cathedral. It almost looks like it is on an island, with a barely used road all around it. Apparently, there was once a moat here, which explains it. It is the only Medieval three-spired Cathedral in the UK. The facade is full of sculptures, of Kings, Saints, and even Jesus himself, which looks very imposing and grand. Queen Victoria’s daughter sculpted hers. Be sure to check out the modern replacements for the Gargoyles, one of which has sharp white teeth! Walking around to the side door, you’ll pass a weathered statue of Charles II which once stood on the front of the Cathedral where Jesus now stands, which we thought was odd. 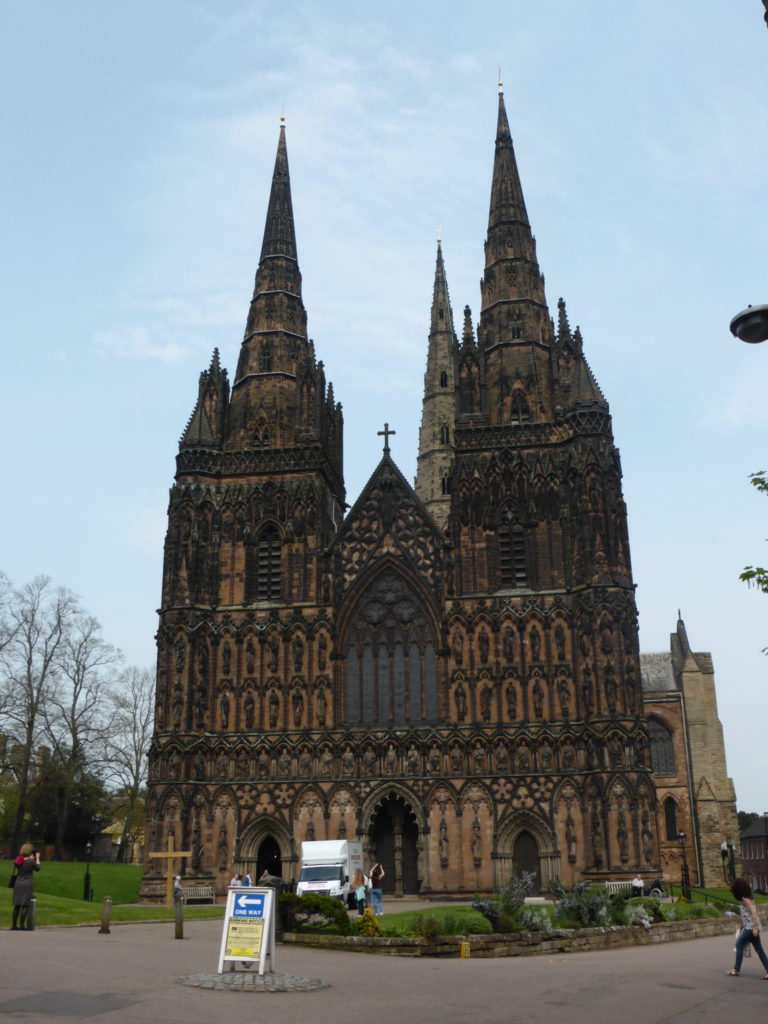 It is a good idea to follow the numbered plan that is given to you as you enter. Make sure you check if any areas are closing before the others, particularly the Chapter House. In here, you will get to see the famous St Chad Gospels – one of the oldest books in Britain from roughly 700AD; the Lichfield Angel – which is believed to be part of a shrine to St Chad from the eighth century; a Medieval wall painting that survived the reformation; and a display of objects from the Staffordshire Hoard. 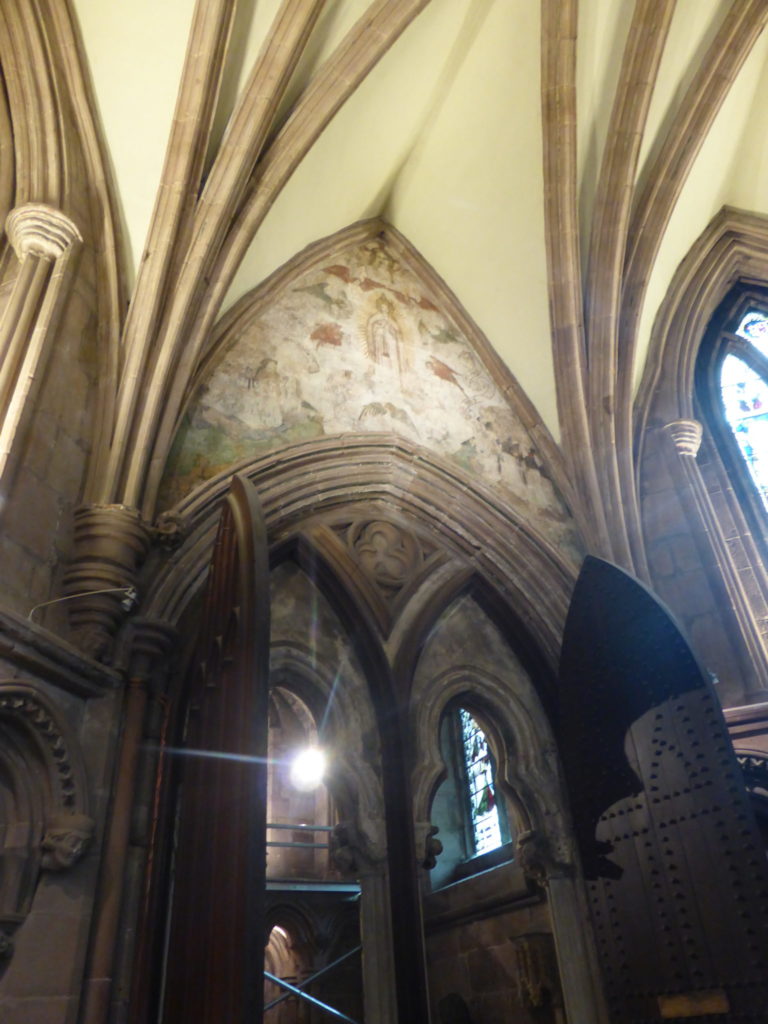 The Herkenrode Glass windows have a great story

Next, visit the Lady Chapel, where you’ll see the 16th century Herkenrode Glass windows, one of the best examples of Flemish glass in Europe. You can read a touchscreen presentation telling all about its story. In the Lady Chapel is also a monument to a former Bishop hidden in an alcove, and a monument called The Sleeping Children, as well as a shrine to St Chad, which contains a modern painting and some candles. Amy always makes sure to light a candle when we visit a religious building such as this. 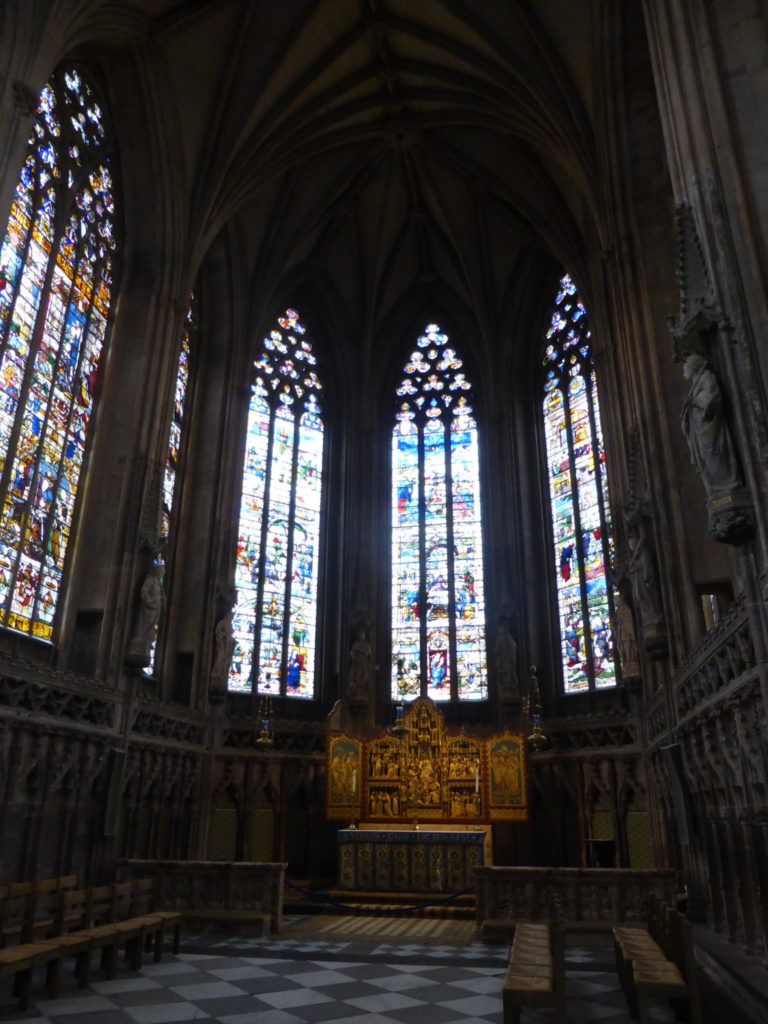 Around the corner is the High Altar, with its Stoke-on-Trent made tiles, while a very old staircase nearby takes you up to St Chad’s Head Chapel, where people used to go to see the head of the Saint in Medieval times. There are great views of the Cathedral from up here, as a balcony overlooks it. Look at the ornate screen, before entering the South Transept. There are World War memorials in here, including one that is inspired by Ancient Egypt. Finish your visit at the cathedral’s shop, which is strangely across the road from the Cathedral. 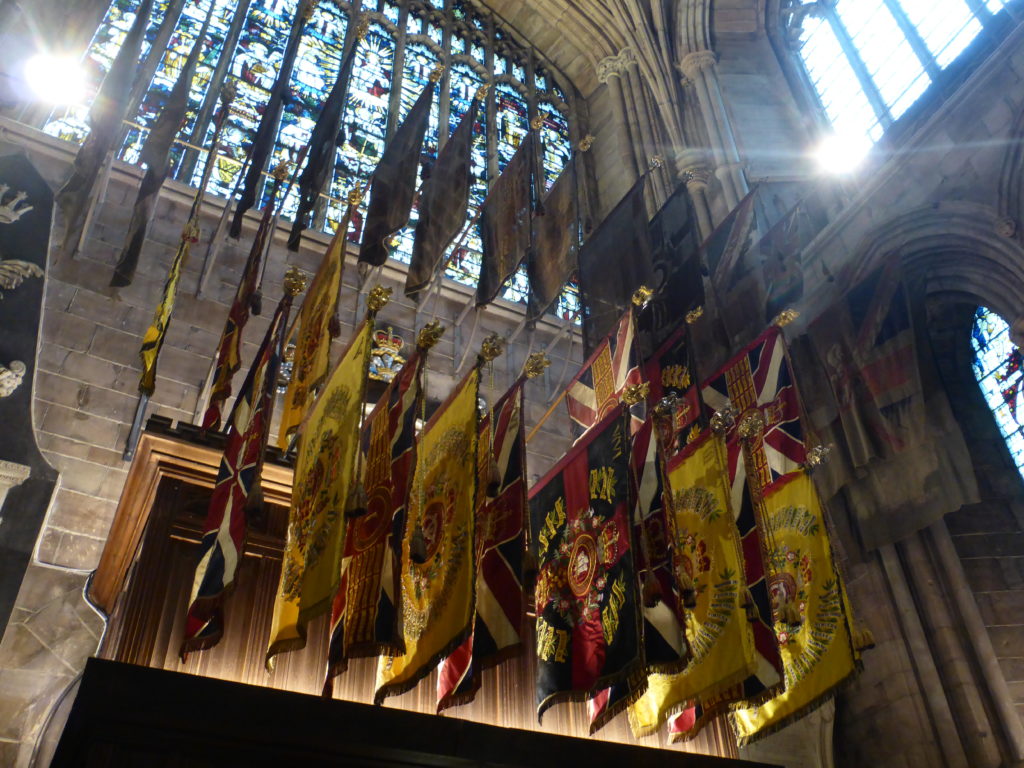 Have you been to Lichfield Cathedral? What is your ‘local’ cathedral?

Dream Dates: The Most Romantic Walking Tours in the World The Romantic Couples Guide to West London