What is social volleyball?

This secret date involved playing volleyball! We attended the Social Volleyball session of the Newcastle Staffs Volleyball Club, at Madeley High School. Social volleyball is basically an excuse to just play volleyball, without the hassle of joining a team and training. There is a really friendly atmosphere to the club. A huge range of abilities all play together. Some of the players are England standard, whilst others are complete beginners. Others still used to play competitively but are now a bit older.

We arrived to a large and busy sports hall, full of people playing volleyball. We were soon approached by a lady who knew we were coming. She introduced us to a great player called Mark, who graciously agreed to show us the basics. We spent a good while at the beginning of the session having a personal training session with Mark.

He started off by showing us the standing position you should take when ready to receive the ball, and then how to dig. This was rather complex at first, since you have to sort of cup your hands in a slightly unnatural way, and point your thumbs down, keeping your arms straight as possible. He threw some balls at us, which we had to dig back to him. Many of them came off one arm only, leading them to go astray.

When he felt like we had got the hang of it, we learned the setting pass. This is used for higher balls. You want the ball to almost hit your forehead, and sort of push the ball upwards using a triangular hand shape. This method was by far the least painful of the two. At one point though, I pushed the ball up high and it got caught behind a basketball net. Once we got the hang of it, Mark threw some balls at us, having us decide which of the two moves to use. It was harder than it sounds, since you have to remember different bits of information, and process them all quickly. When it doesn’t come naturally, it takes time to work it all out.

The final skill Mark showed us was how to serve. I took to this very easily, since it just involves belting the ball up with one hand. It is rather painful on the hands though. Amy did ok from closer to the wall, but as we got progressively further away she really struggled to get enough power on the ball.

After this, Mark got us involved in a real game. There were seven players on our team, so we took it in turns to sit out. One of the hardest things to do is to work out what position you are supposed to stand in. Each time your team took the right to serve from the other, you all rotated. Sometimes it was our turn to serve, then we were in defensive positions, and finally up at the front by the net.

It was particularly hard to remember when it was our turn to be the setter, which involved having our back to the net, ready to receive the ball from the defence. At one point, it hit me on the head on its way down! I have no idea who won the game to be honest, but it seemed to be over very quickly. It was great fun! Despite our lack of skills, we were made to feel very welcome, and got plenty of encouragement for good passes.

Soon after, a second game took place, against a different team, who were playing on the other court. This was great fun too, and we were both feeling more and more confident. Still the main issue was positioning, and we strayed out of position a couple of times. We were just watching the person in front of us to know where to go next, but it didn’t always work!

So good we stayed for more

It was the scheduled finish time of 8pm now, and a birthday cake was brought out for two of the members. To our surprise, Mark said they would stay and play another game if we wanted to join in. I readily agreed, to extend our evening further, but Amy said she would sit out. She ended up sitting out the whole game, while I had figured it was just a temporary thing. I had great fun playing it though, and Amy didn’t seem to mind. Our first session was free of charge, with future sessions costing £3.50 each. We left with a lot of adrenalin after a really fun activity, but our hands were killing! The next day they were black and blue with bruises! 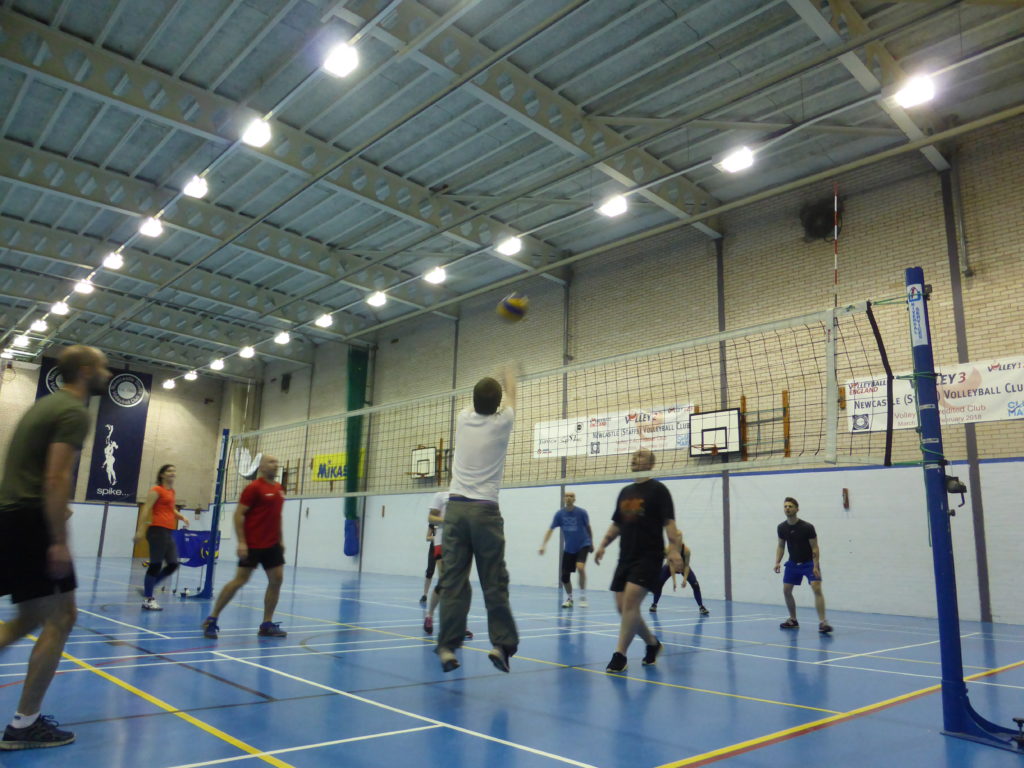 So how does it rate?

All in all, it was a great date idea, and I don’t think we were the only couple there. Playing volleyball is a fun, competitive activity that will get your hearts racing. After the match, you can spend some time chilling out together over a nice relaxing drink, or even a romantic bath. Check out if your local area has a social volleyball club, and get stuck in. If not, then hire a sports hall with a bunch of friends and get a game together. We have done this in the past too, and it is also fun. However, we much preferred having the guidance that we got from the club, which made the date much more pleasurable as a result.

Have you ever played volleyball on a date? How did it go?

The Romantic Couples Guide to Side Amazing Days Out: Big Pit, National Coal Museum of Wales