A microlight flight is an experience to cherish

When we first met, back in 2002, Amy was petrified of heights. I first discovered this on a London Eye flight where Amy refused to leave the seating area in the middle. Slowly but surely, Amy’s confidence has improved. Dramatically, in fact. She still has jitters when it comes to heights, but has now ticked off many rollercoaster rides, countless trips on that previously feared London Eye, and no less than three hot air balloon rides. Better than all of that is the latest experience that we had – a microlight flight! 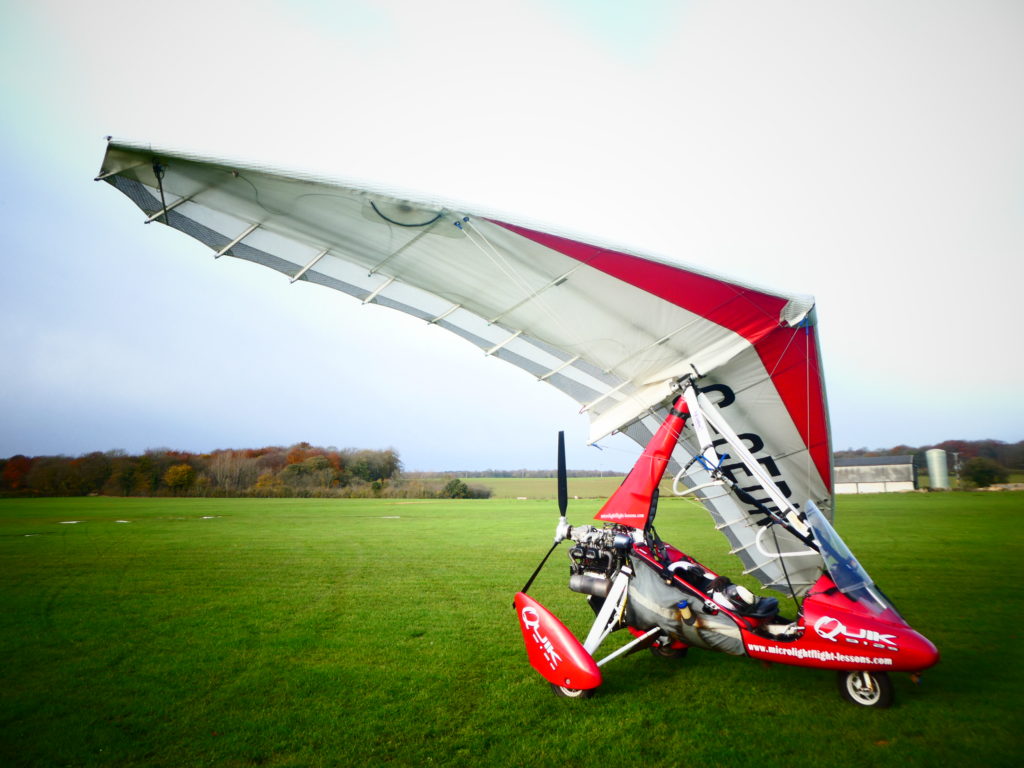 It has to be said that microlight flights are very weather dependent. Therefore, it can be extremely frustrating trying to get a flight. It was the fifth time we’d booked in for one, so we didn’t hold out too much hope. We have been trying to get a flight since April. Our voucher ran out in just a couple of weeks, so we had to do a weekday flight. Despite the frustration in planning this date idea, it was most definitely worth the effort and cost.

Will our microlight flight go ahead?

The pilot has a flightline which you can call from 7am on the morning of your flight. He will make a decision on the conditions for that day, or as happened to us on a previous occasion, postpone that decision until a later time. We took our flight with David Buck of Microlight Flying Lessons at Netherthorpe Airfield near to Worksop. We arrived a full hour before our flight time, but got to go straight out as we were the first passengers of the day. 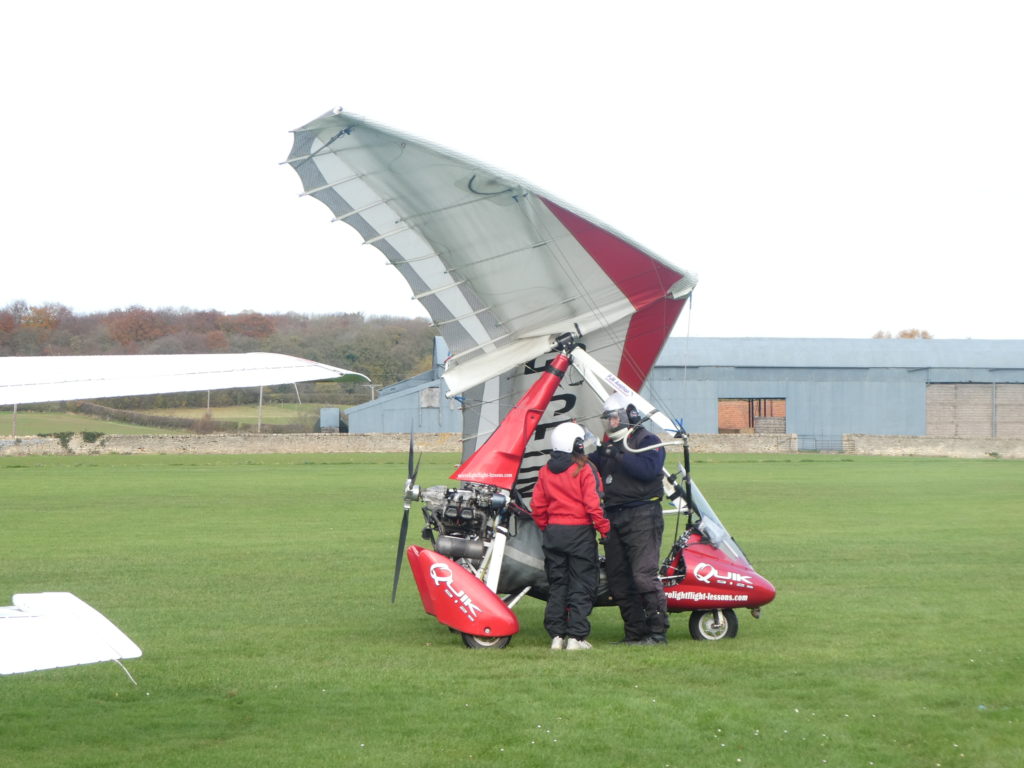 Amy was adamant she wanted to go first, to get her nerves out of the way. Therefore, she got kitted up in her flight suit and headed straight outside to the small red aircraft that was to take us both on a thirty minute pleasure flight around the area. She was incredibly nervous, but you could barely tell. She is so brave nowadays, and has come such a long way since that London Eye experience! After a safety briefing, Amy had to get in the microlight first, sitting in the back, behind David, the pilot. We had to take it in turns since it is only a two-seater aircraft.

The fact that you don’t experience it at the same time makes it rather strange for a date idea, admittedly. However, we’d thoroughly recommend it as a joint experience for any couples. The adrenalin rush is amazing, and you will feel that for your partner too. I had to wait in a picnic area whilst Amy had her flight. I tried to film the best I could, as they started to taxi off across the field, but they soon went out of view. Annoyingly, as I heard and saw them taking off, the camera was playing games and turning off and on so I missed a bit. 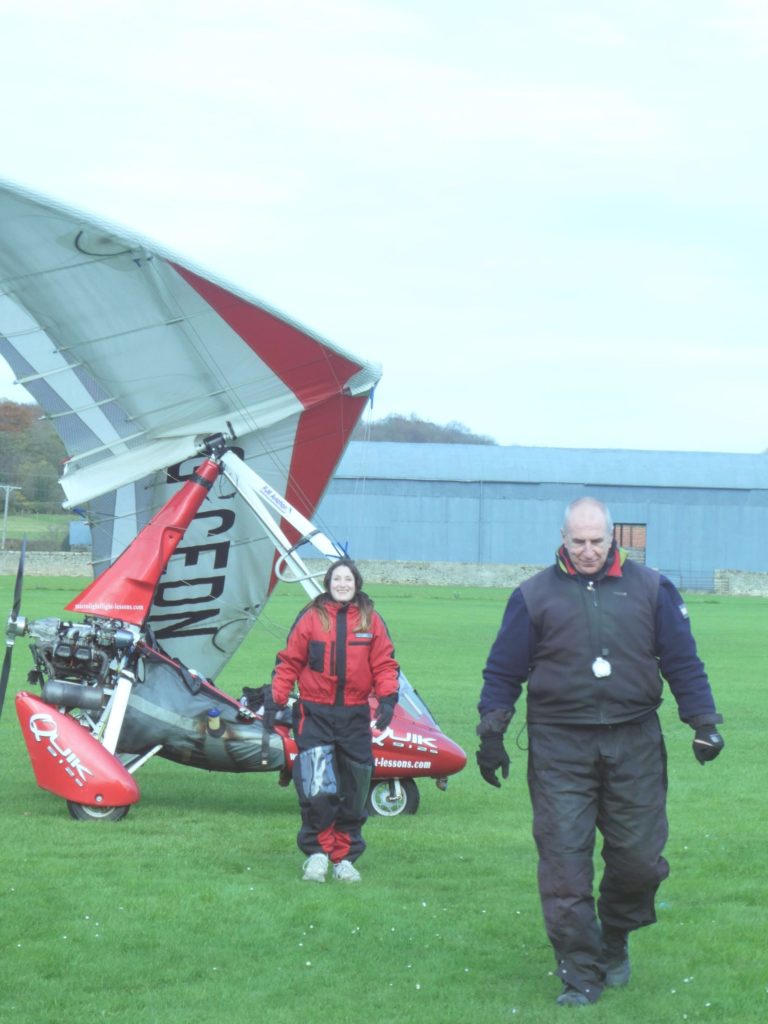 About twenty minutes later, I saw them appear in the sky again. They reminded me of ET, flying through the air on his bike. So small in the huge expanse of sky. They circled the airfield before coming in to land. Amy came out with a smile on her face. Every time she does something that terrifies her at first, she ends up on a huge high afterwards. She realises this nowadays and pushes herself to do more incredible experiences. Maybe it is an attitude that you too could adapt to push yourself to be more amazing.

Up, up and away

There was no time at all to waste now before I got myself kitted up in a flight suit. We had to dress warmly, since it was freezing cold up in the air. I had two pairs of socks on, a t-shirt, jumper, jacket and coat, as well as the flight suit and gloves! David had forgotten to put his warmest coat on for Amy’s flight, so was grateful for the chance to put that on before mine. Soon enough, we were out at the microlight and I was being kitted out with my headset and helmet, and told to do no ‘ducking and diving’ as I slowly entered the microlight. 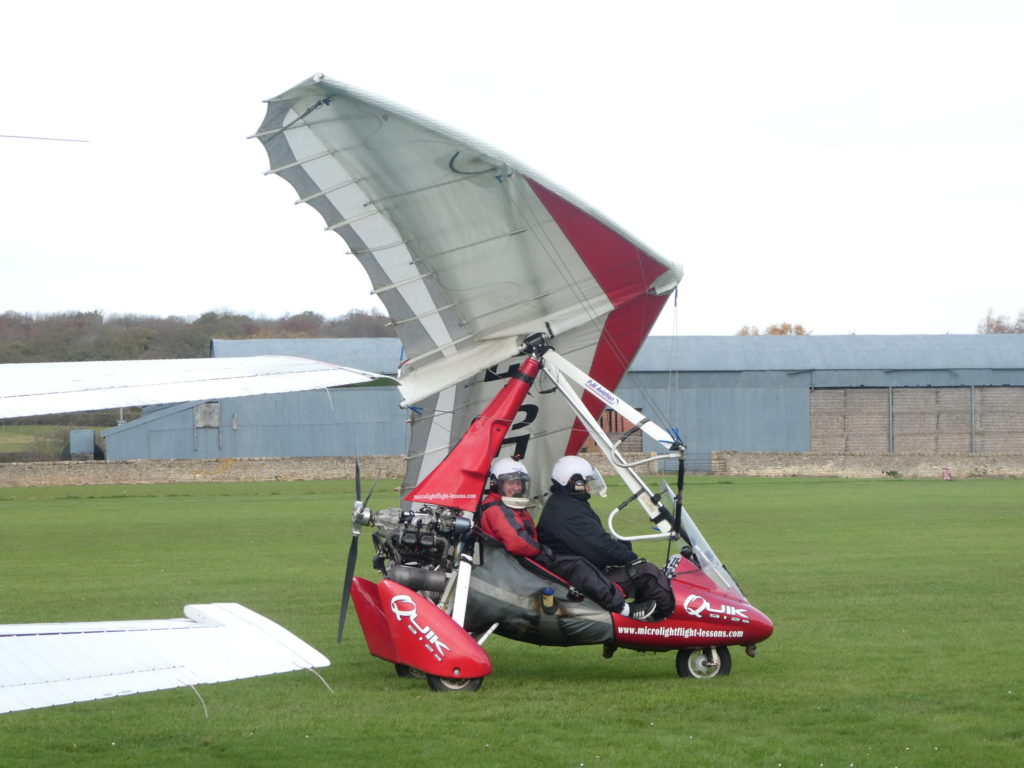 There are foot pedals which can steer the aircraft, so I had to avoid puting my feet down on them during takeoff and landing. David set the engine running, and in no time we were taxiing down the runway, which is basically a grassy field, with some bumpy bits. Taking off was very cool indeed and feels much lighter than a normal aeroplane feels. It was pretty terrifying realising just how open everything is. You are 3300 feet in the air, yet are just sitting in an open cockpit.

The earth looks so different from above

The views were incredible, comparable to a hot air balloon ride but going much faster and over more interesting terrain. This is because in a microlight you have much more control over where you fly. David is an extremely good pilot, and the headsets allow you to communicate very well. He constantly pointed out interesting facts about the places we could see below us, and told us about how the microlight works too. He told us how the air works to cause bumps where hills and things are, though our flights weren’t too bumpy at all. 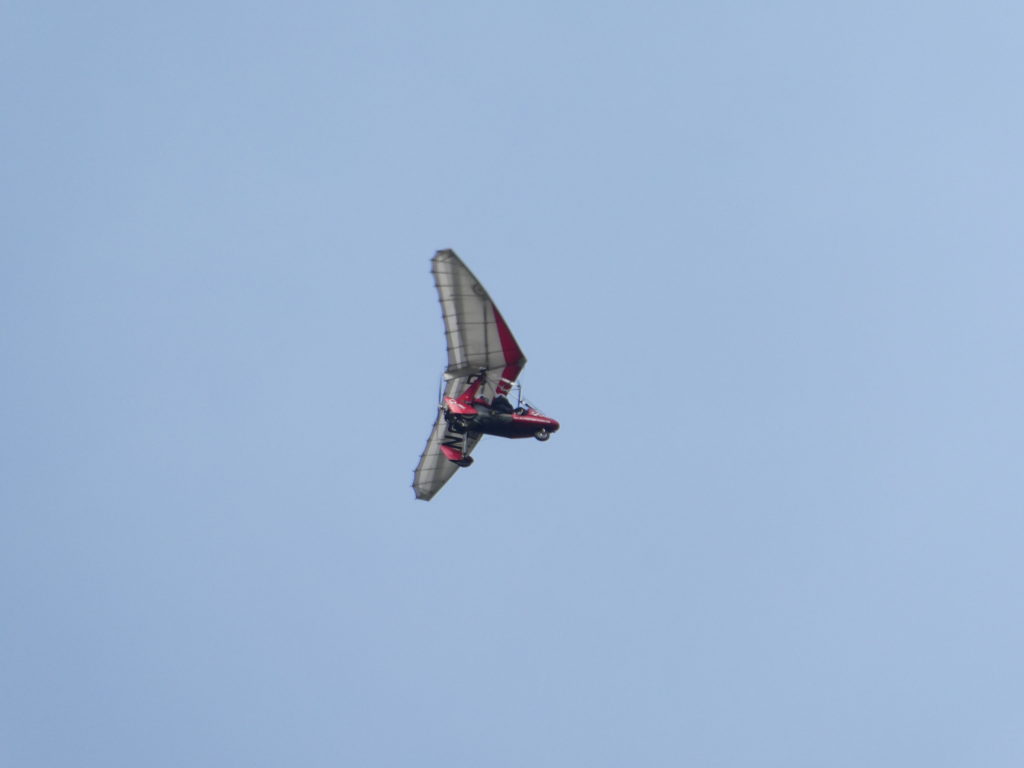 Me and Amy both went the same way, so mainly saw the same things. These included Cresswell Model Village, Chesterfield, Bolsover Castle, solar panel fields, Hardwick Hall, and Creswell Crags. One thing I was lucky enough to see that Amy didn’t was the Red Arrows doing a training session. I couldn’t actually see the planes themselves, but could see the loop-de-loop smoke trails that they formed, looking like a giant rollercoaster in the sky. I could see one descending from the clouds above and creating a new smoke trail in front of us.

What happens if the engine cuts out?

Visibility was excellent on our flights. David described them as 9 out of 10 flights, with the only negative being how cold it was. Definitely wrap up warm if you take a flight! He told me that the benefit of flying high above the ground was that if the engine was to have a failure, he’d have plenty of time to find a safe field to land in, which was slightly reassuring. Although we weren’t allowed to take our cameras on the flight with us, David has an on-board camera that films the views you get for a long-lasting memory of your flight. 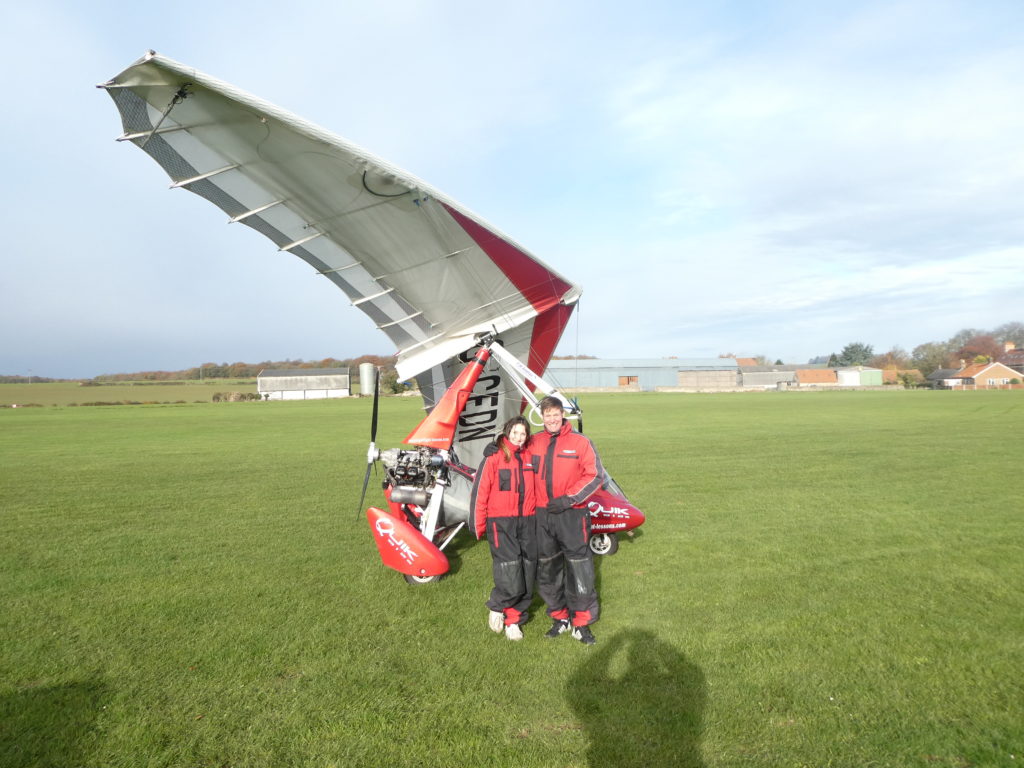 It was also great to see the runway of the airfield as we approached the end of our flight. From up here, you can see the markings on the ground, and see just how short it is! The landing was extremely smooth. What an experience! When I’d safely exited the microlight, David called Amy over and he took a few photos for us, before we got ourselves changed out of our flight suits and went on our way, still on a high.

Would you dare to experience a microlight flight? Have you already done one?