Secret Dates: Sunbathing at the Beach

A recent trip to Wales took us to the seaside town of Rhosneigr. Initially, we were due to have a surfing lesson. It would have been the perfect day for it, since we had glorious sunshine. However, what do we know? There was no ‘surf’ apparently, so our lesson was cancelled. Not to throw away such a beautiful day, we moved onto our back-up secret date of sunbathing at the beach. Back-up secret dates are something we have done for quite some time now. In the UK, where we live, the weather is so unpredictable. Our plans can be ruined at short notice if they rely on decent weather. Therefore, we always have back-ups in case of poor weather or other eventualities like today. 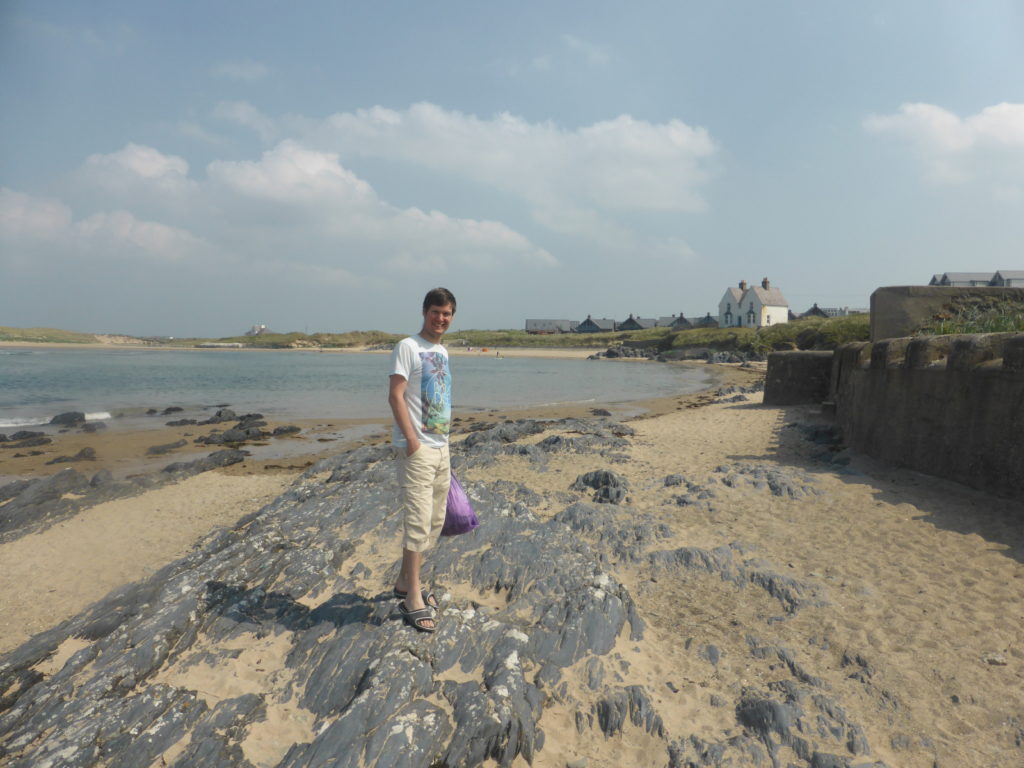 We walked up and down Rhosneigr Beach at first to look out for an ideal place to lay down our towels. We ended up with a place further around where the families with kids couldn’t be bothered to go. The sand was absolutely gorgeous, really fine, soft and warm, and ideal for sunbathing. We commented on many occasions through the day that it felt like we were abroad, rather than in the UK. It was around 11am when we got to the beach, and we were a bit concerned initially that there would be rain. BBC Weather had given it out at 12 o’clock, and there was a dark cloud above. 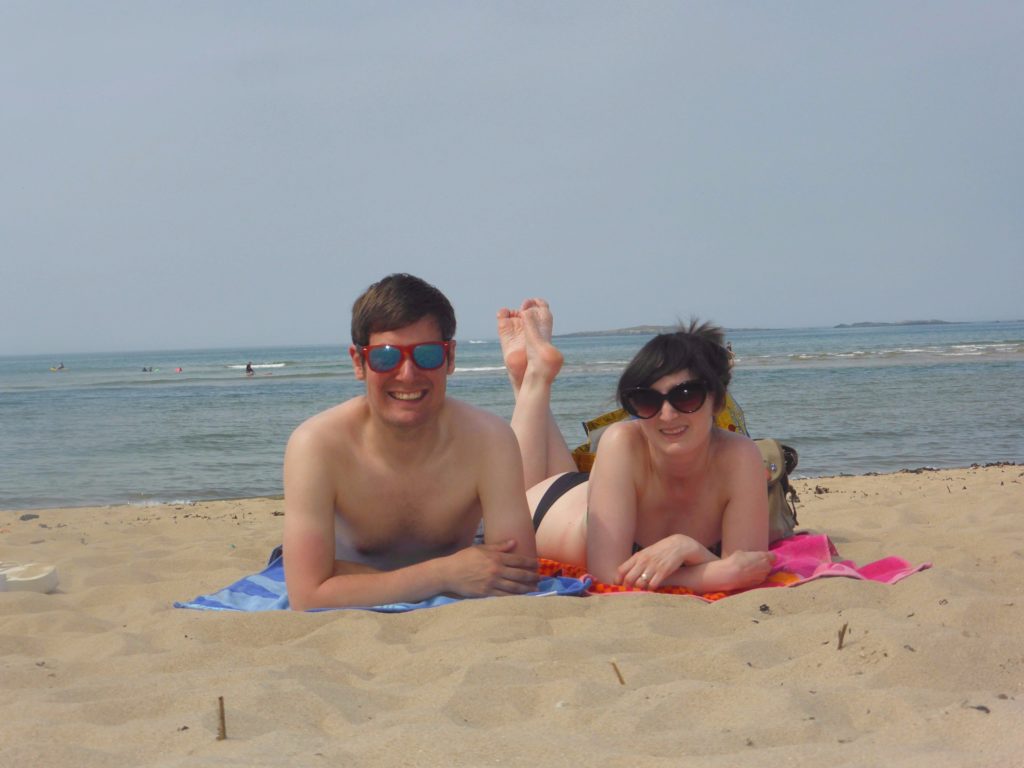 We didn’t get to surf, but we did eat at Surf Cafe

Deciding to play it safe, we headed off to look for somewhere to eat lunch, after a walk around the town. We found a place ironically called Surf Cafe, which was upstairs from a different surf shop called Funsport. It was decorated with surfboards and the like, and had a large glass window with views of the sea. I had a vastly overpriced bacon bap for £3.95. Amy went for a bacon brie and cranberry panini, which came with salad and crisps. The food was nice enough, though definitely more expensive than it should have been. I suppose partly that was because of its location, right by the beach. 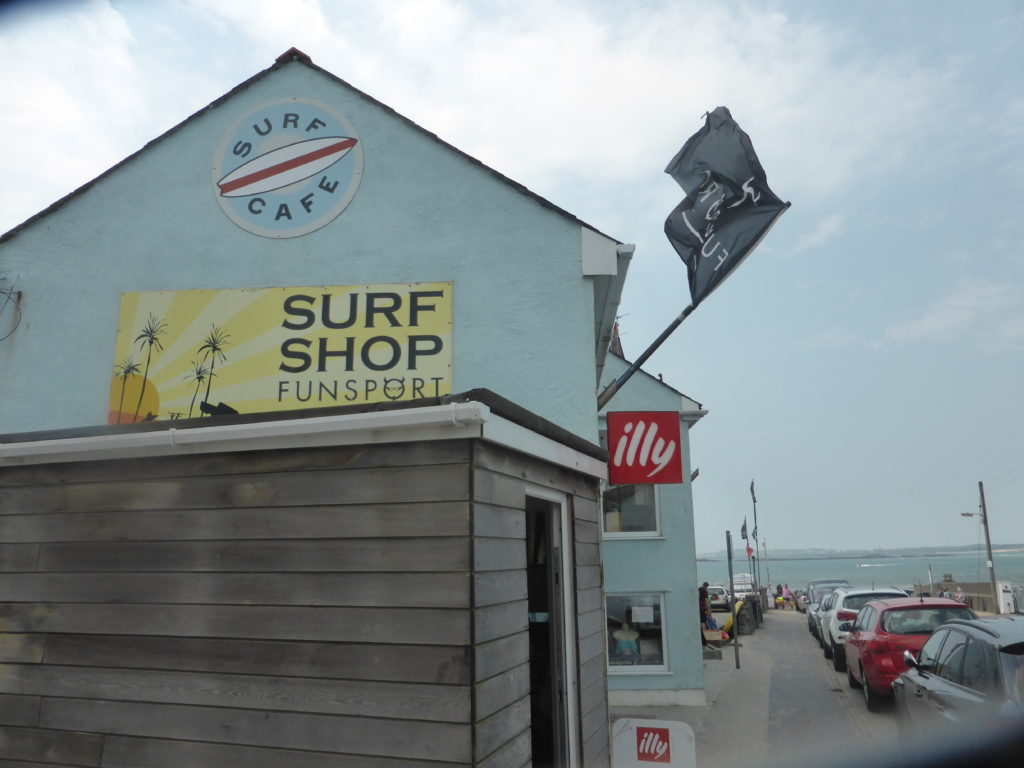 We asked in the shop below if they were offering surfing lessons today, but were told the same thing as earlier. It did at least put our minds at rest that we weren’t being fobbed off. Then it was back to our original position. The weather was certainly like what we would get in Ibiza or the like. We had an amazing time sunbathing. Amy was happy and content, whilst I enjoyed playing with the sand with my hands and feet, as it was so soft. After a couple more hours of it, we became concerned about dehydrating, since we only had the one bottle of juice with us. Therefore, we decided to head off for some water and maybe an ice cream.

There was an ice cream van. However. we got an orange calippo for cheaper in the shop just up the road, and a large bottle of Buxton water for just 75p. We completely gulped down the water, and the ice lolly was very much enjoyed as well. We ate them on another leisurely walk around Rhosneigr. It ended on some benches by the Women’s Institute Gardens further down the beach, where the sand didn’t look as appealing. We drank so much water that we ended up going back into the shop on our way back to the beach to buy another bottle! Our final spot of sunbathing probably was just under an hour long. In fact, the sun was still out even when we called it a day at around 5.30pm. 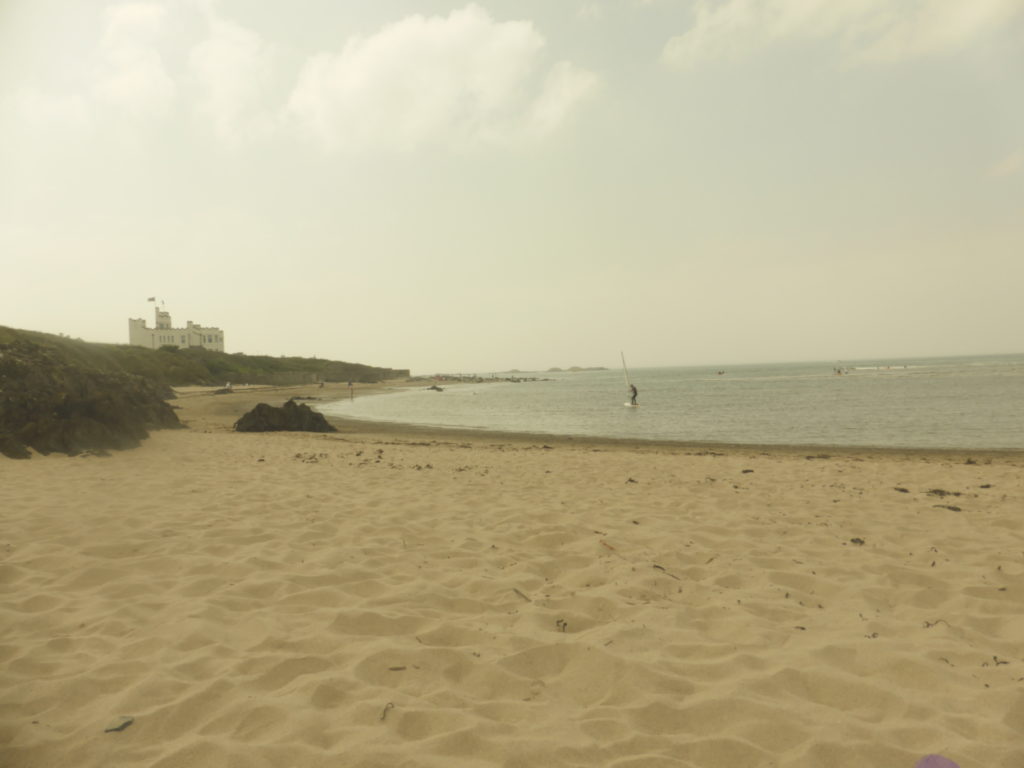 We decided to go back to the car, and see what sort of time we would be getting home. After seeing it would be gone 8pm, we decided to eat this end. We walked back to a little takeaway pizza place we had passed called Aydin’s Pizzaria/Cafe. We got a 12 inch margherita for £5.50 and sat outside on a table in their little beer garden type thing. The sun was bearing down on us big time. It was almost uncomfortably hot as we sat and ate our pizza. Pretty nice, if a bit soft. As long as the weather is hot and sunny, you will find few better beaches in the world for sunbathing than Rhosneigr Beach in Wales. 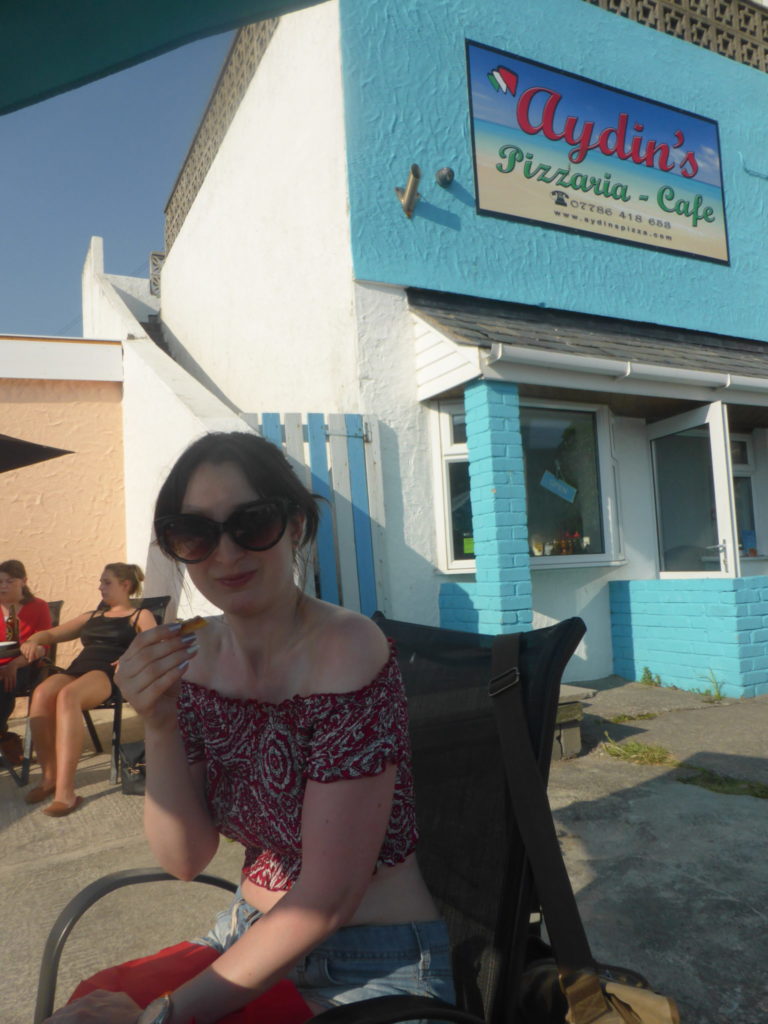 Do you enjoy sunbathing with your partner? What are your favourite beaches?