A poetry reading at the festival inside a factory

We enjoyed a recent secret date attending a fantastic poetry reading, at the Emma Bridgewater Factory, in Stoke-on-Trent. The event was part of the Stoke-on-Trent Literary Festival, which is a terrific three day annual event. Our hour long entertainment was in the form of a poetry reading and discussion with two renowned poets, Liz Berry and Mark Huband. The events all take place in rooms around the factory. Last time we came, on its first ever day I think, they had a gazebo which collapsed during David Starkey’s talk. 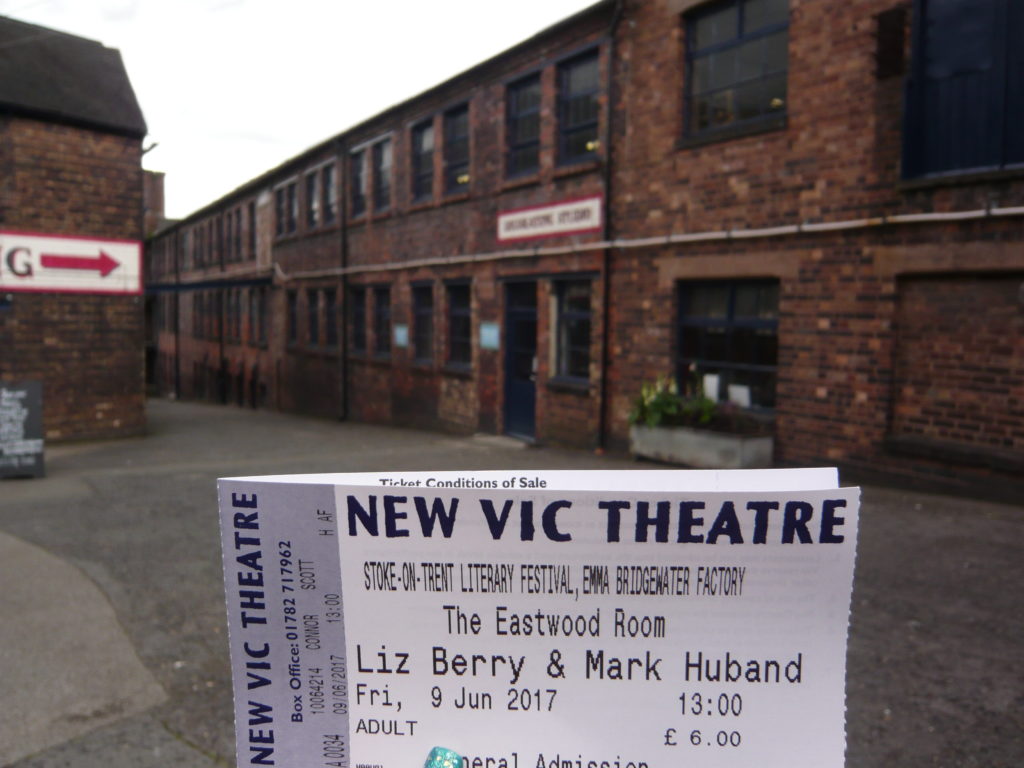 There was a small gazebo where tickets were on sale, and information could be got about the festival’s events. We picked up a programme and some flyers, and they offered us a tea or coffee. Our cups of tea were given to us in Emma Bridgewater mugs, which is pretty cool. It wasn’t long before we headed inside, up an exterior staircase to the Eastwood Room, where our event was taking place. We were one of the very first in, so were told to take our pick of seats. The room was very well stylised for the event. It had Emma Bridgewater wallpaper on the wall behind the stage, and a gorgeous flower display on the front of the stage, picked from their own garden. Not good for the hay fever, mind! There were three chairs set up on the stage, for the poets and the host. We decided to sit on the front row so we had a better view. Emma Bridgewater herself came on stage to introduce the event, and the poets. John Prebble, from the Poetry Exchange, was the chair of the event. He first introduced Dudley-born poet Liz Berry, who read from her award-winning collection called Black Country. The poems from the book are a tribute to the area that Liz was brought up in, the people that she knew, and their unique voices that she felt could be lost without giving them this outlet. Liz is a very engaging reader, because of her very personable manner. She was previously a primary school teacher, and this perhaps shows in her mannerisms. Her poems evoke a tenderness of such quality that it is easy to relate to the characters, despite not understanding some of the local dialect. She was even visibly moved herself upon reading some of her poems. Her poems had topics that varied widely, from morphing into a bird, her love of the local dialect, and an ode to an ordinary local bird who performed an extraordinary trick called the Birmingham Roller. After her engaging reading, she was quizzed on her poetry style by the chair. Next, we had a reading from Mark Huband. Mark had stood for election the previous night as the Labour Party representative in his area, but wasn’t successful. He is a former journalist who has spent a lot of time in wartorn countries. He began with some readings from an older book called American Road, before finishing with a world premiere reading from his latest book. The poem that he read was a very emotionally-charged account of witnessing a man dragged away from his family during a war in Liberia. The styles of the two poets were very different. Liz provided a warmer account of life, whilst Mark’s poetry was much grittier. Out of the two, Liz was certainly more enjoyable to listen to. However, Mark’s work was of the kind which has a great impact all of its own. Amy particularly related to a poem that Mark read which told how he missed an old friend that had died. John then discussed Mark’s work with him, before opening up the room to questions. Some of the questions related to Liz’s use of slang, and how the poets used punctuation in their work. After the reading, we had a walk around the Emma Bridgewater shop, and for the first time, their factory garden. The garden really is a haven within the city centre, because many varieties of plants and flowers are all wonderfully presented. We also saw some baby chicks and a massive cockerel, who was wandering freely. Inside the factory shop, we saw the poets themselves and went over to have a chat with Liz Berry and John Prebble. They were both extremely friendly. It was a very enjoyable afternoon indeed. Have you ever been to a poetry reading? We think they make an amazing date idea, do you agree?

The Romantic Couples Guide to Central London Dream Dates: The Best Places to Attend Poetry Readings in the World