We recently took our third hot air balloon flight, with Virgin Balloons. This time we took Scott’s Mum for her 65th birthday present, and Amy’s Dad. We had bought Amy’s Dad a hot air balloon ride for his 60th birthday nearly eight years ago now, with a different company. He still hasn’t been on it! Our flight was going from Uttoxeter Racecourse, instead of Stafford Amerton Railway. It had been changed due to the weather conditions. 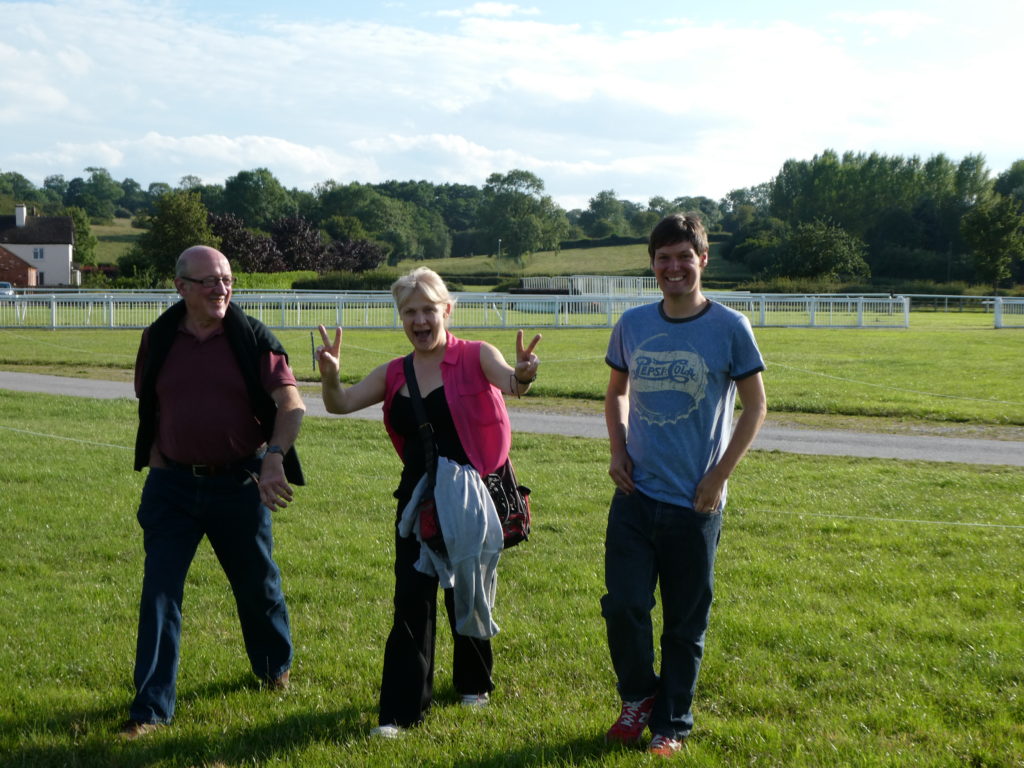 Despite being on the early side, we noticed that the balloon had already arrived. A fair few people were already around it, in the middle of the racecourse. Our pilot was Graham Dorrell, and he had already got the balloon laid out by the time we arrived. After an introductory talk, Graham asked for a volunteer from each side, and an old bloke was keen to help. His task was to hold the balloon open enough at the bottom to get cold air blown in from two huge fans to inflate the balloon. 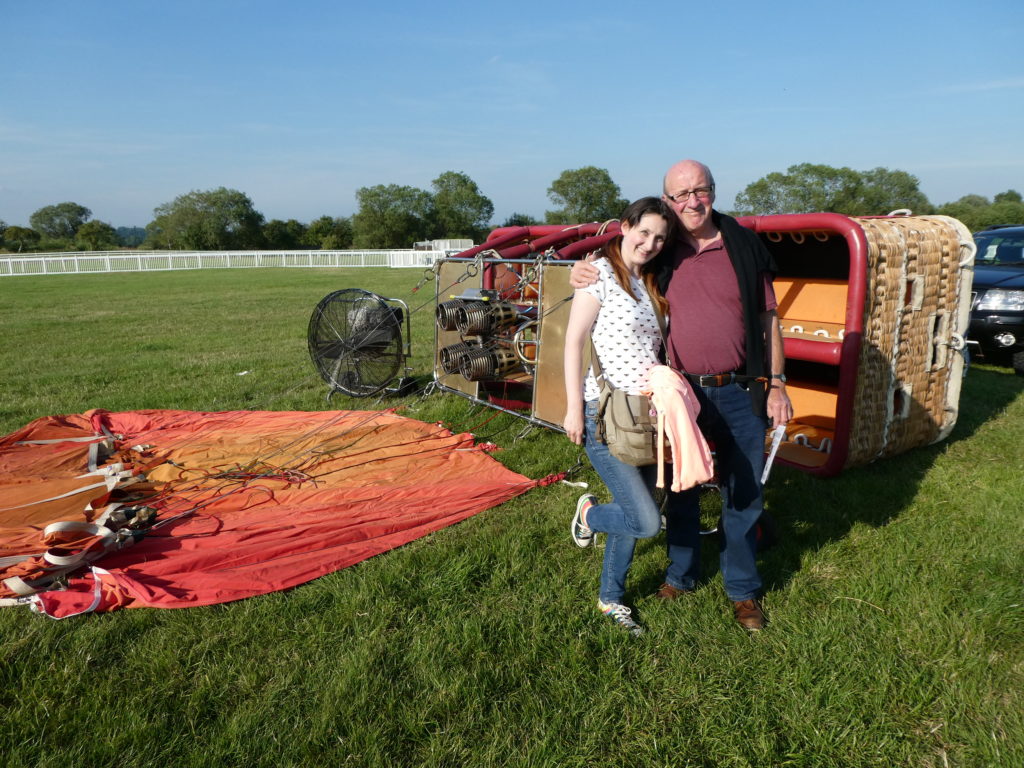 The weather can be a real pain

Once it is inflated enough, he can add hot air from gas canisters, which helps it to fly. However, as he was doing this crucial step the balloon was almost toppling over due to freak gusts of wind that weren’t forecast at all. Therefore, on safety grounds, Graham decided not to go ahead with it, and they began to deflate it. We then had an anxious wait whilst Graham made a phone call regarding the weather. Ironically, we could see another balloon in the sky in the distance. 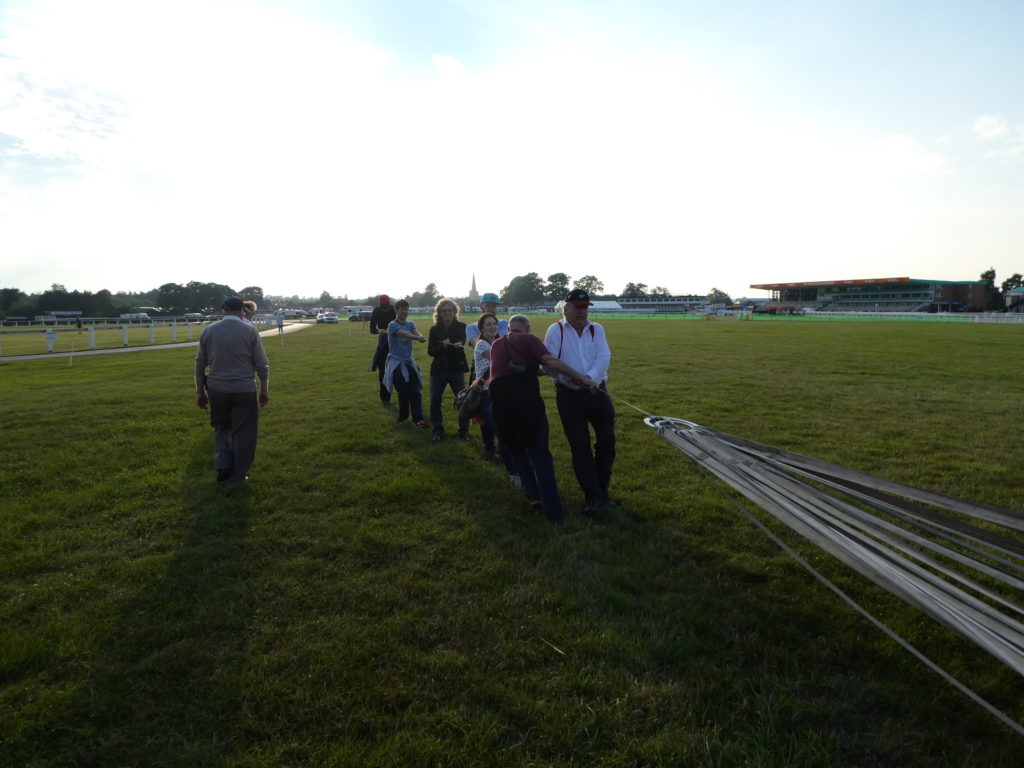 We did get a head start by stretching the balloon out flat again, which was a bit like a tug of war. Around half an hour later, Graham called for us all to retake our positions for a second attempt. Amy decided to volunteer this time around to hold the balloon open whilst the cold air was blown in. This time, thanks to Amy’s expert help, it was all systems go! 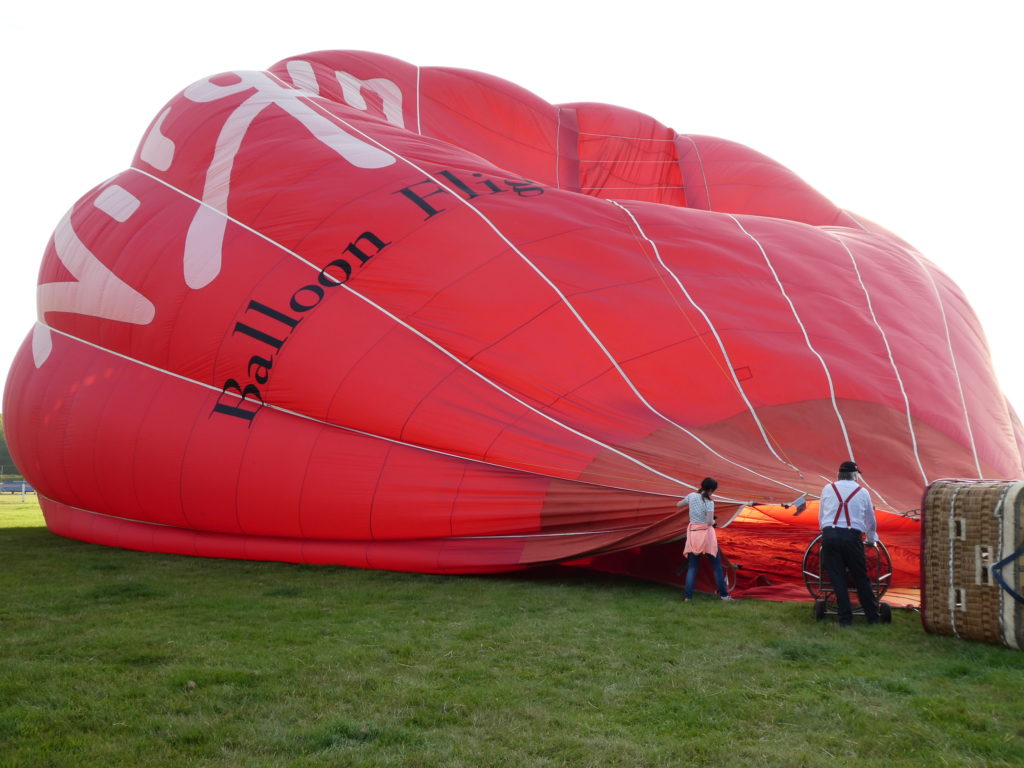 Graham jumped in and fired it up, and called for us to all get in as quickly as possible. Beforehand, we’d arranged that we would go in the middle. We have been on the end the other two times and figured it would be the best view for Scott’s Mum and Amy’s Dad. We jumped in really quickly, then Amy’s Dad clumbered in, getting his boot stuck in the foothold. Scott’s Mum was last one in, and she completely went tumbling. 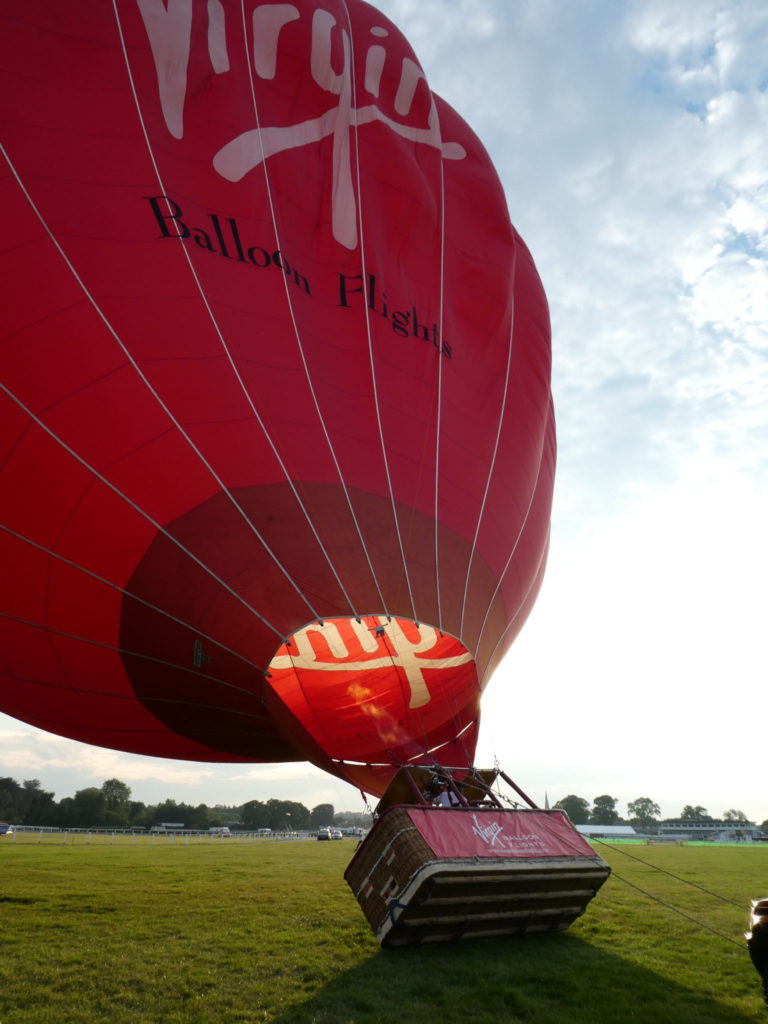 Uh-oh, hope the balloon doesn’t take off just yet!

She ended up hanging on the balloon sideways. Amy’s Dad was oblivious to her plight, and we were trying to reach across to grab hold of her. The chaser came to help her too, and the old bloke who was getting into the next compartment. We didn’t have time to dilly dally though, and had to get straight into the brace position. We could just about see above the side of the basket that we were still on the ground. Until we weren’t of course, and Graham told us that we could all stand up. 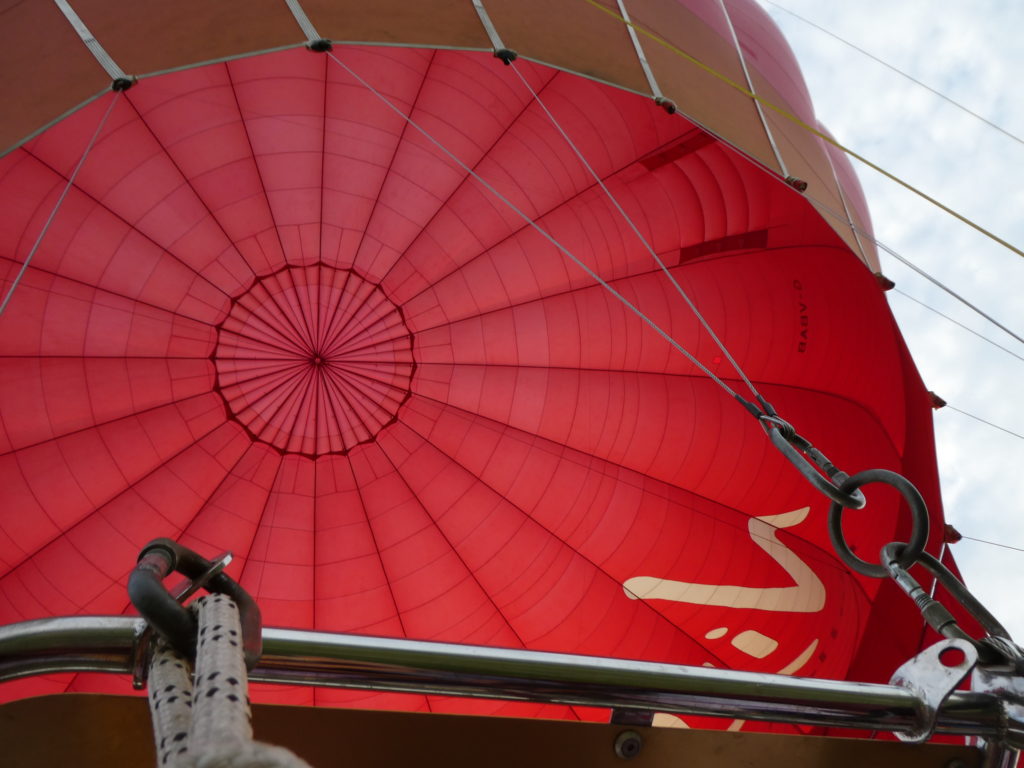 It is always mega cool to see just how small the people waving at us from the ground become, as we went higher and higher. There were nice views of the sun setting. However, this was more so on the opposite side of the balloon, so we only saw that between the other passenger’s heads. Graham told us that we were heading in the direction of Stafford. To be honest, the winds were a bit stronger than Graham had anticipated, and we were going 18mph. This meant that the landscape beneath us, mainly fields, was moving at a fairly rapid pace. 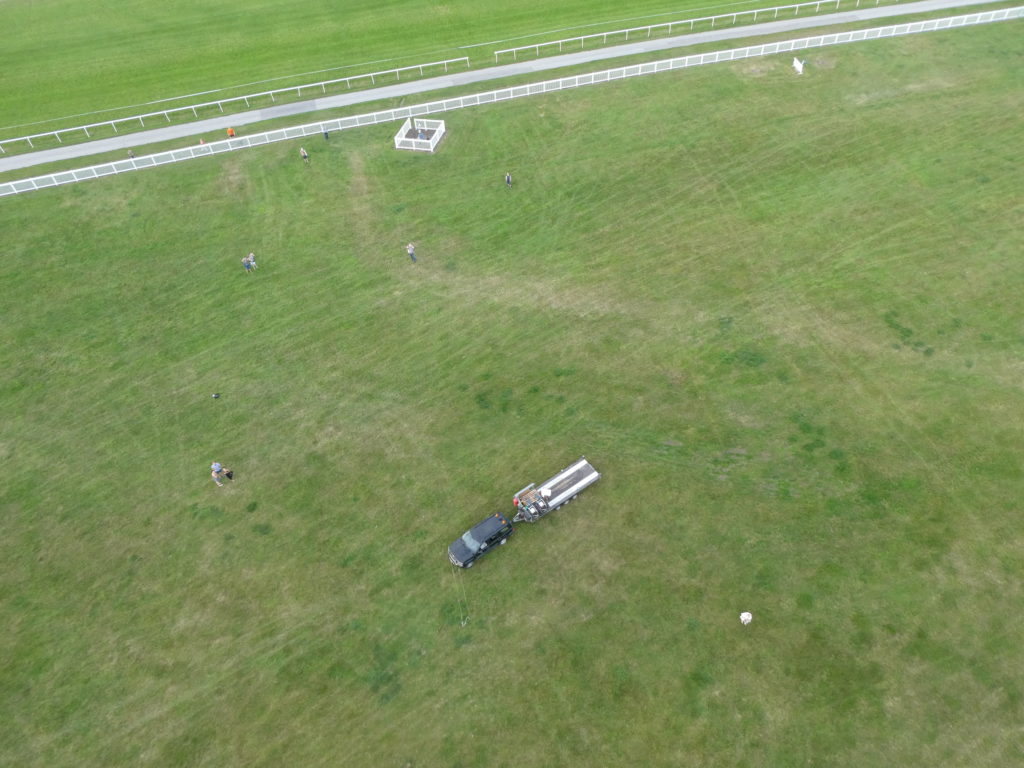 I think the farm animals thought we were an alien spacecraft

As a result, we spent most of the flight much lower to the ground than we had been on our previous flights. I was right next to the middle, so had the brunt of the heat from the gas burners. It wasn’t too bad at all though really. Like last time, the sight of our hot air balloon had an impact on the farm animals. They all made a run for it when the balloon flew over their field. Soon enough, and way before we had expected, Graham called for us to get into our landing positions. 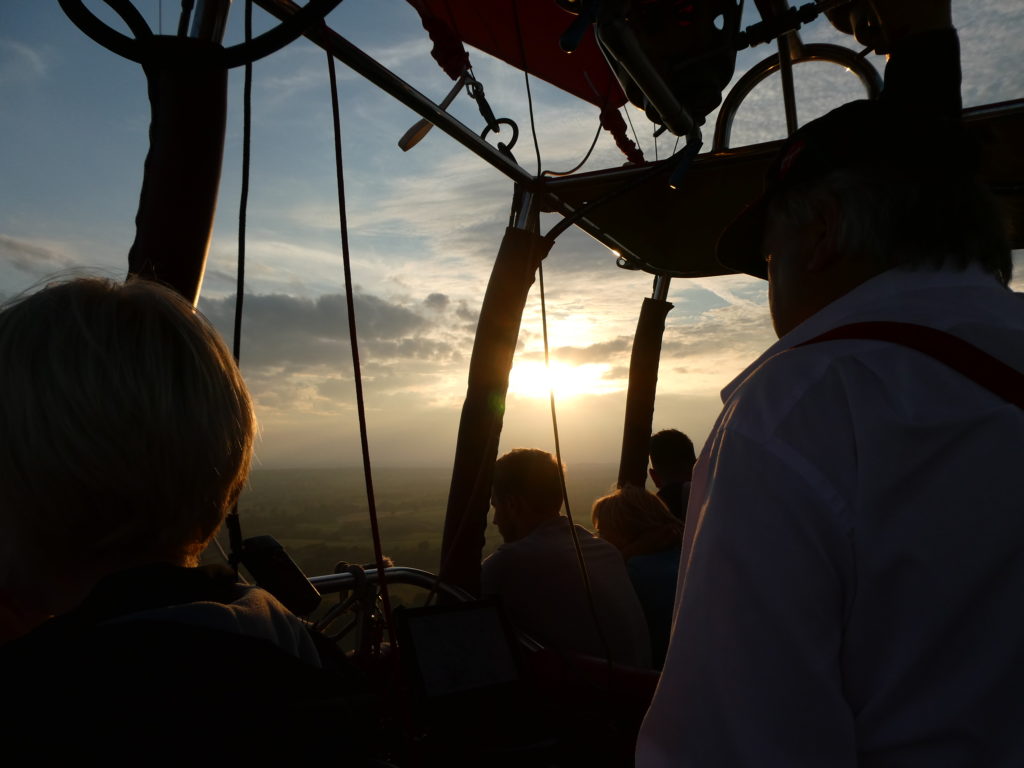 Our intial landing was a bit bumpy, into a crop field in Hartley Green, near to Stafford. The crops were actually blowing right in our faces. Right as we were about to stop, the basket actually tipped over! Good job we were holding on to the handles! We found ourselves with our backs to the floor and looking up to the skies. It was a rather unusual position. However, it was better than those on the lower side who had their faces amongst the crops! 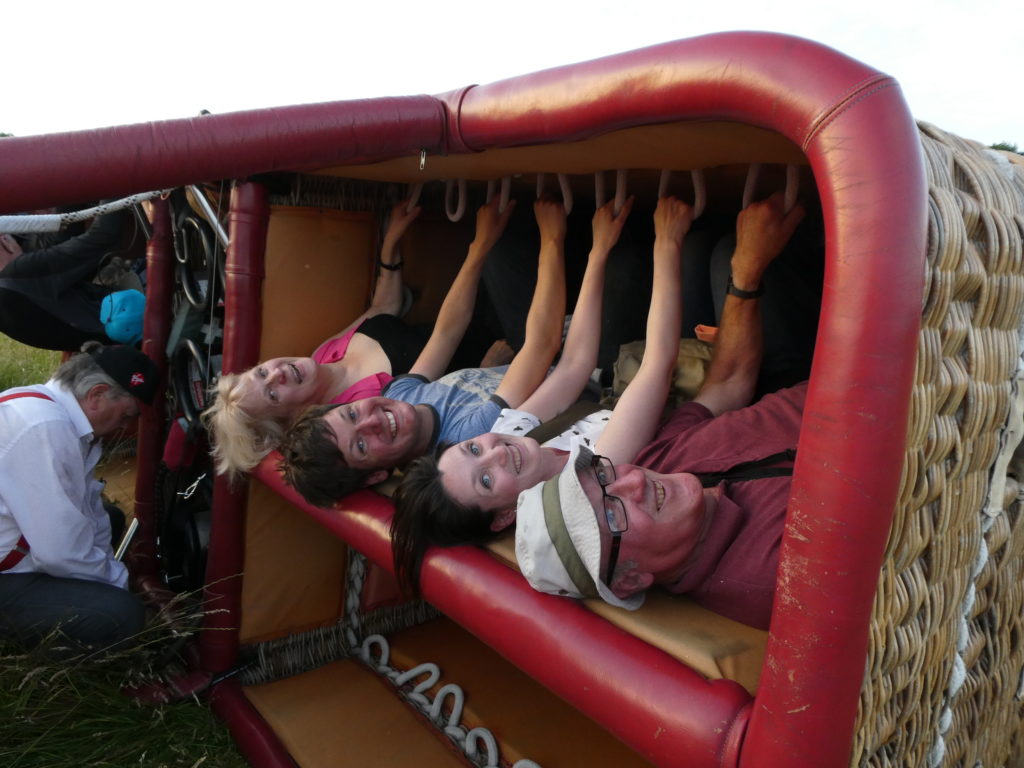 How could we forget to take hay fever tablets?

Soon enough, Graham got the balloon deflated, and we then had a long wait. Landing in a field was terrible for our hay fever, particularly as we had both forgotten to take our hay fever tablets. The sky was very dramatic, though it was starting to get dark. Graham was on the phone to the chaser, to try and direct him. He then had to get the retrospective permission of the farmer to enter his farm. This took absolutely ages. Graham had to walk all the way around the huge field to get to the farmhouse, to avoid ruining any more of the farmer’s crops. 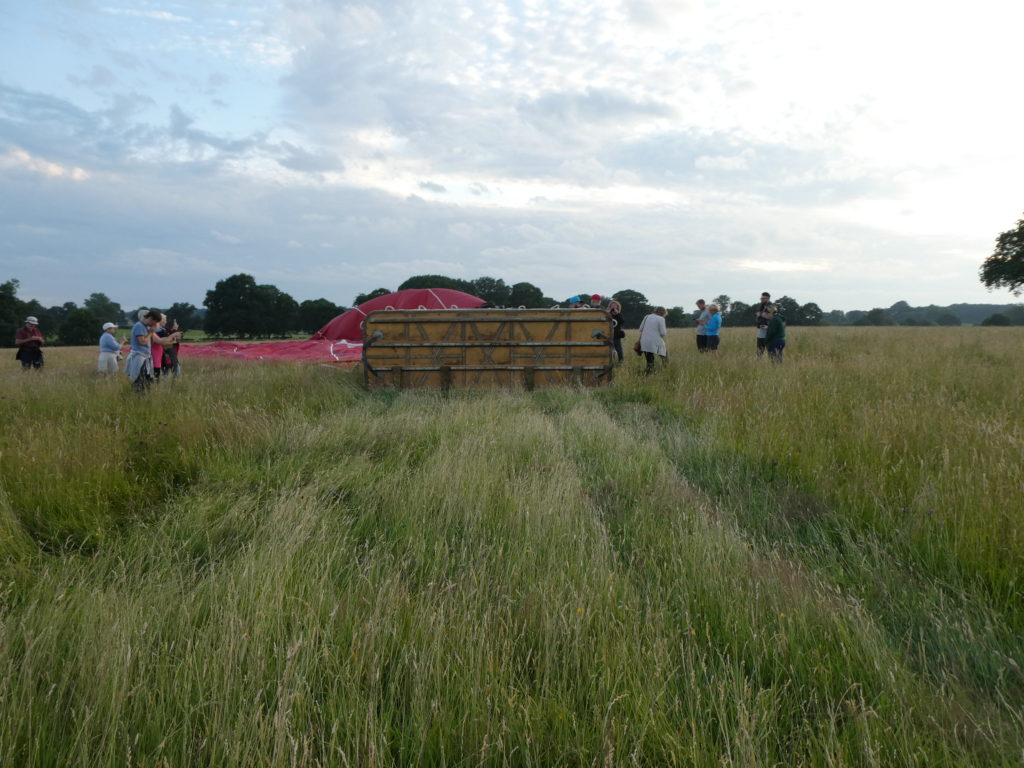 Eventually, after literally half an hour, Graham returned, to say that we could start packing the balloon away. It first had to be rolled up, so that it was a long and thin line of fabric. Some of us went on one side, and the others on the opposite side. We then rolled it into each other, trying to get the air out as best we could as we did so. Graham was sitting on it as he made his way up the balloon, making sure it was as ready to pack away as possible. 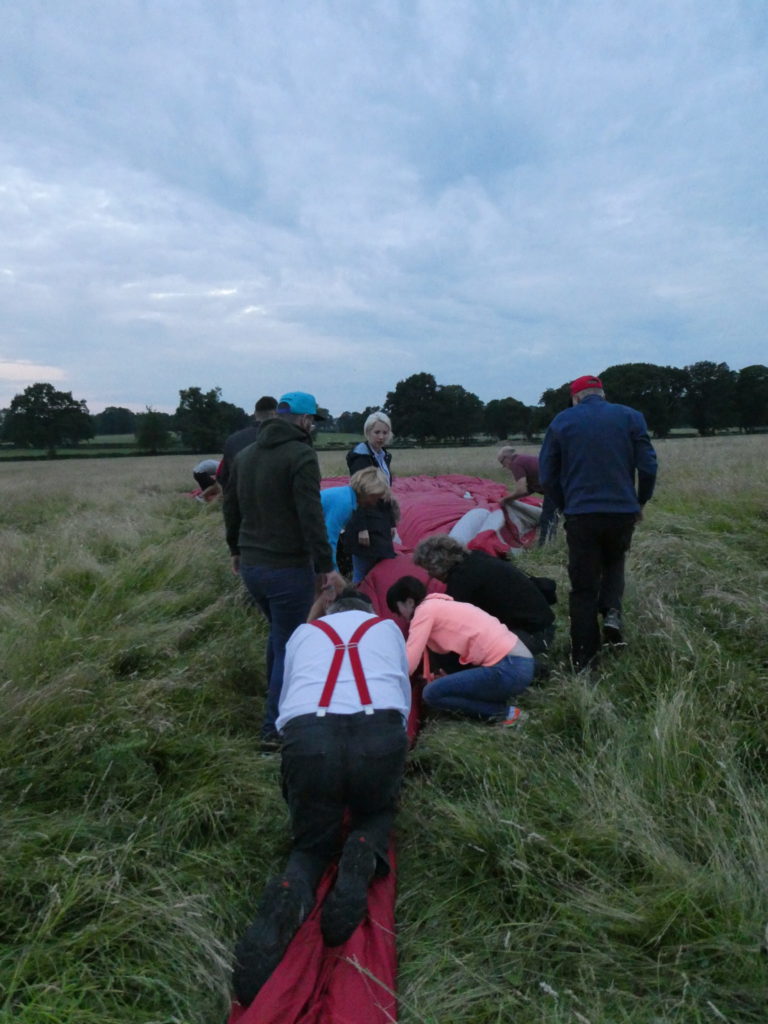 The balloon is going in that tiny bag?

Some people tied the rolled balloon together, before it was ready to be put away. The bag really doesn’t look large enough for a huge hot air balloon. This involved some of us holding the bag open, whilst others lifted the balloon into it. Amy’s Dad did a good job of tying the bag together. It then had to be put onto the trailer. This really just involved rolling it on, and a mechanical arm did the rest. 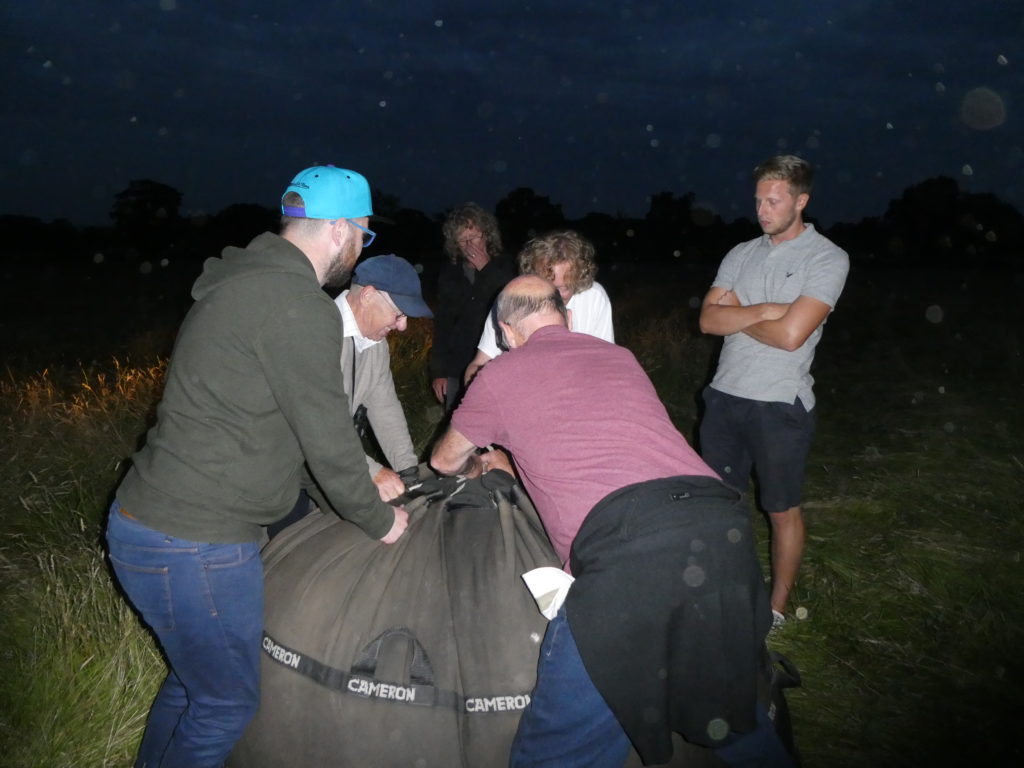 The other issue was getting out of the field. It was a pretty long walk around this huge field. Once on the path, we waited for a while for a minibus to arrive, which took us back to Uttoxeter Racecourse. It was around two hours after landing, and nearly 11pm, by the time we were all at Uttoxeter Racecourse, for our post-flight champagne toast. It felt a bit weird having champagne in a pitch black field this late at night. Graham gave us our certificates to cap off a wonderful experience. 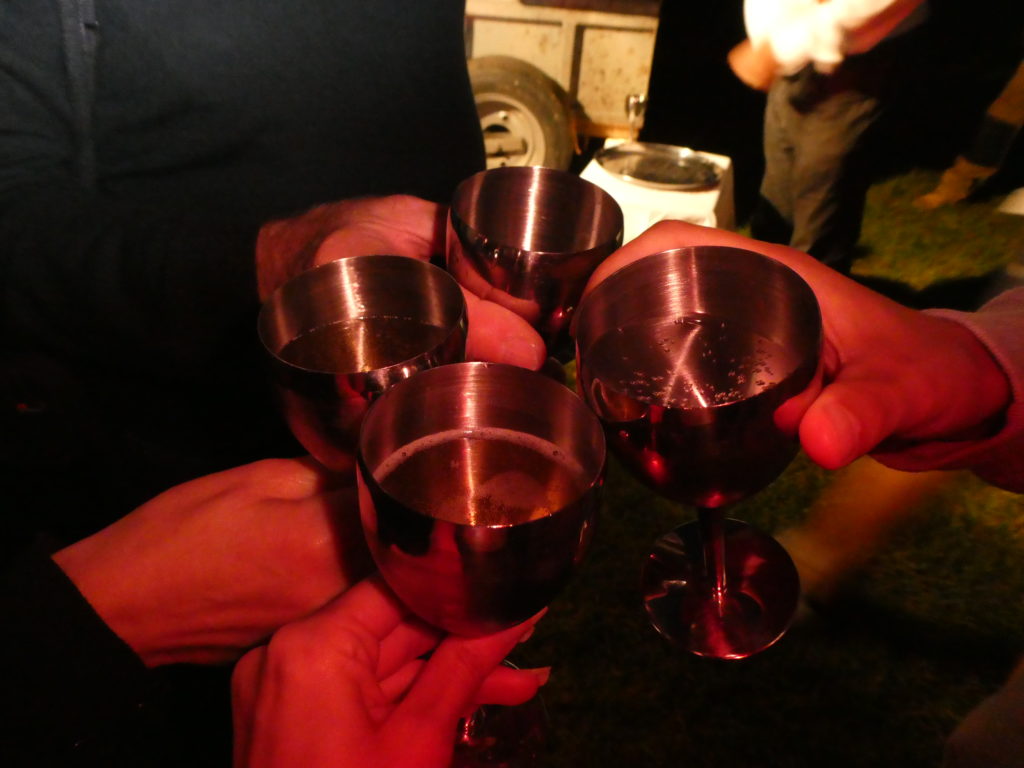 Have you been on a hot air balloon ride? Tell us your experiences in the comments…..