Secret Dates: Dance by the Lake

To dance by the lake with your partner is amazingly romantic

This secret date saw us dance by the lake, with a radio. We chose Rudyard Lake, in the Staffordshire Moorlands, since it is relatively close to us. Rudyard Lake was constructed in 1799 to feed the Caldon Canal. In Victorian times, the lake was a tourism hotspot, with up to 20,000 people visiting each day. Indeed, the parents of Rudyard Kipling (the author of The Jungle Book) met at Rudyard Lake. It was the lake that they named their son after. A Victorian precursor to the Beckhams maybe? Matthew Webb, who became the first man to swim the English Channel, did demonstrations at Rudyard. Most notably, the ‘African Blondin’ Carlos Trower, walked over the lake on a tightrope in the 1860s and 1870s. 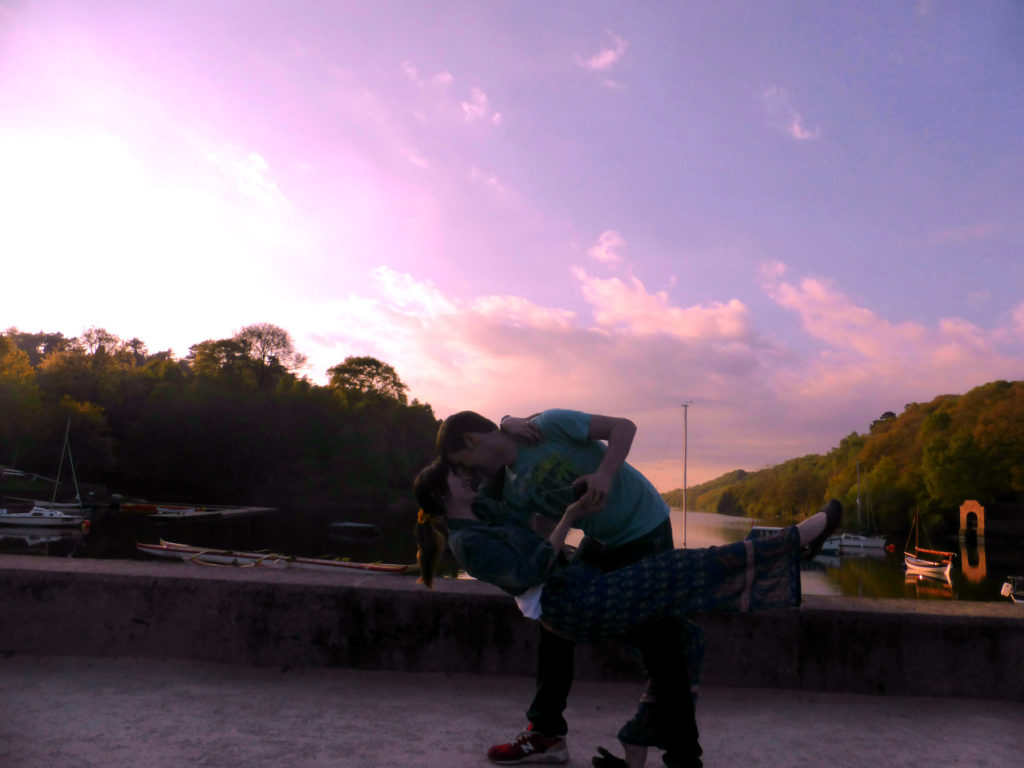 Although we have been there a few times for boating, we had never walked around the lake. Our plan therefore, was to walk around the lake, get dinner from the Rudyard Hotel, and then dance by the lake until sunset. We took with us a small portable radio, and tuned it into whatever station we came to that sounded half-decent. We parked up on the side of the road, and headed to the lake through the Rudyard Hotel’s grounds. The Rudyard Hotel is a very grand but quaint hotel. A huge, green lawn in front provides an idyllic scene. A pack of donkeys passed us as we locked up the car. 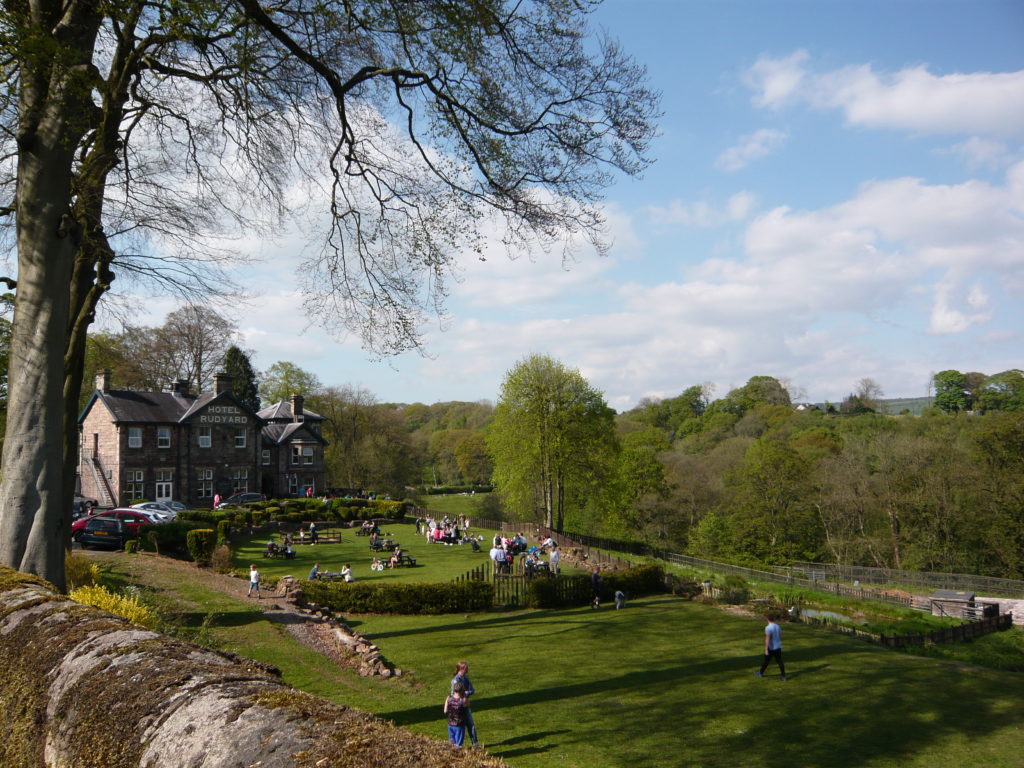 On entering Rudyard Lake, it was hard to miss the new sculpture atop an old oak tree. It features the aforementioned African Blondin. This Victorian daredevil walked across the lake on a tightrope, a feat that was replicated at a special event just last year. It is a brilliant sculpture, which also features an owl and a woodpecker. We started our visit with the Visitors Centre. The Visitors Centre has a very cute little balcony, with picture perfect views. Amy spotted a swallow nesting just underneath the former boathouse in which it was located. The visitor centre has a few interactive bits, including facts about the area, a stuffed fish that was once caught in the lake, and a mosaic of scenes relating to it. 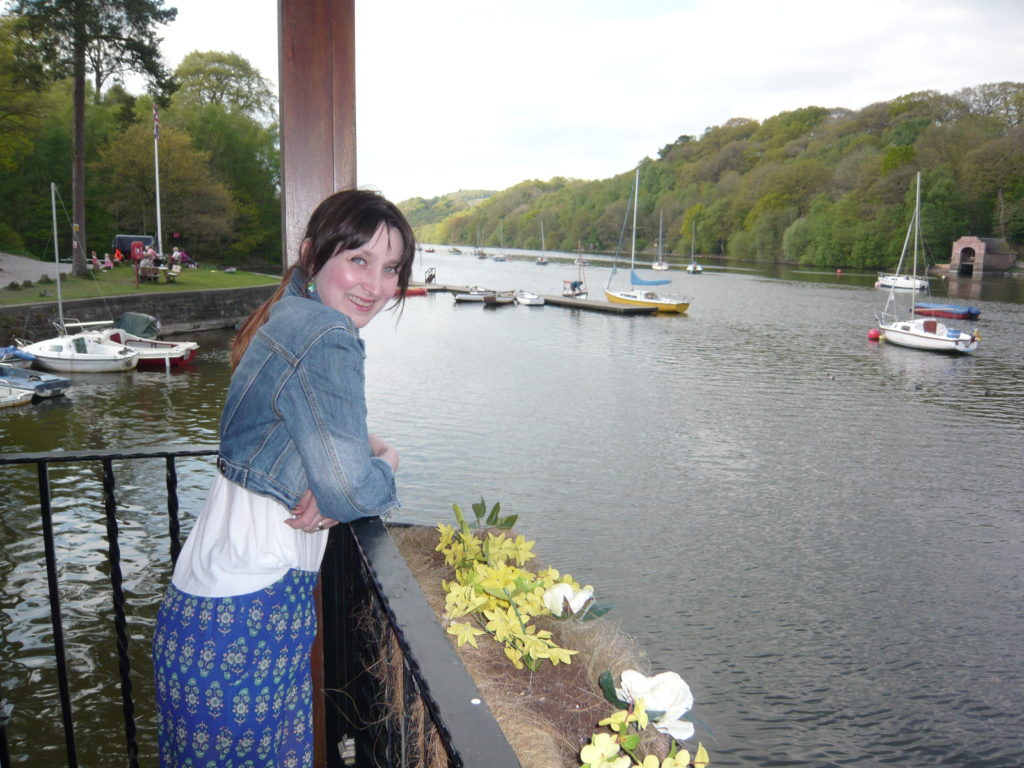 After looking around for ten minutes or so, we began our walk around the lake in a counter-clockwise direction. The rowing boats (on which we once had a mini-disaster), and the vintage navy boat ‘Honey’, looked great on the water. I walked along the wall to avoid the crowds coming the opposite way, and we explored a pretty grassy area as well. The bridge over to The Dam has been filled with love locks, engraved with romantic couples names. The Dam itself looks mighty impressive, though it wasn’t being used when we visited. 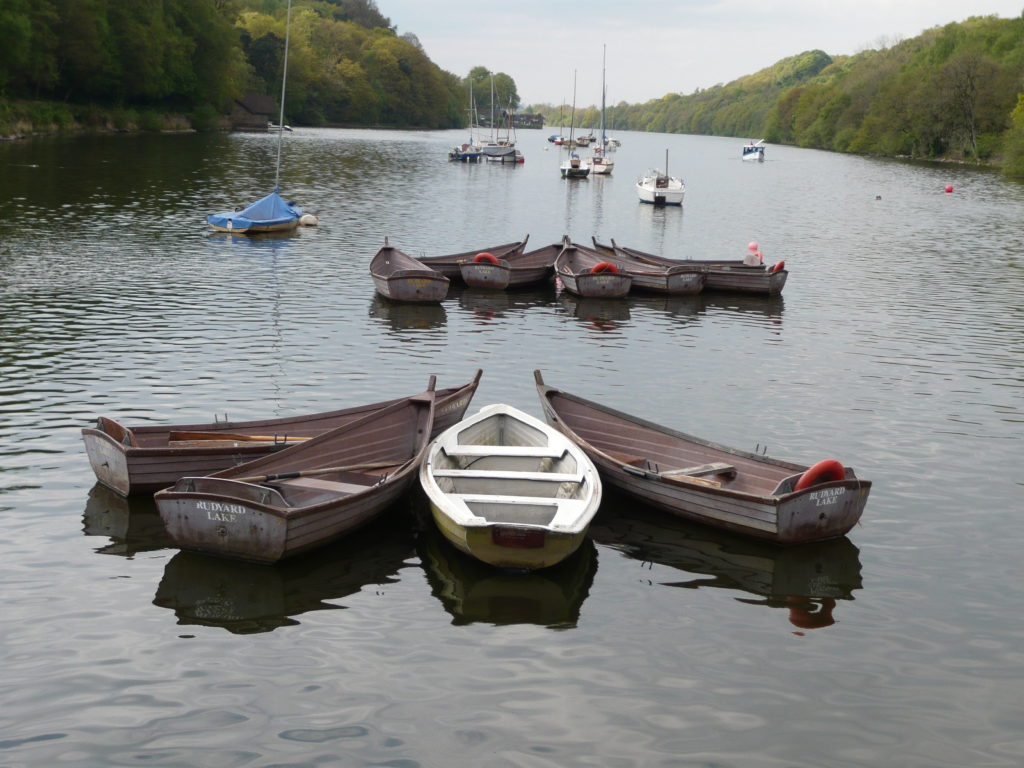 A small miniature narrow gauge steam train takes people on rides up and down the eastern side of the lake. We followed its track to its most northerly point. There is lots to explore. First off, we climbed a set of stairs, made of wood and mud, to the Earl of Macclesfield Boathouse. This has recently been restored and houses a vintage boat underneath a glass floor. The bench looking out over the lake looks incredibly romantic, but another couple had already staked their claim to it. They have a great display about the restoration process in there though. 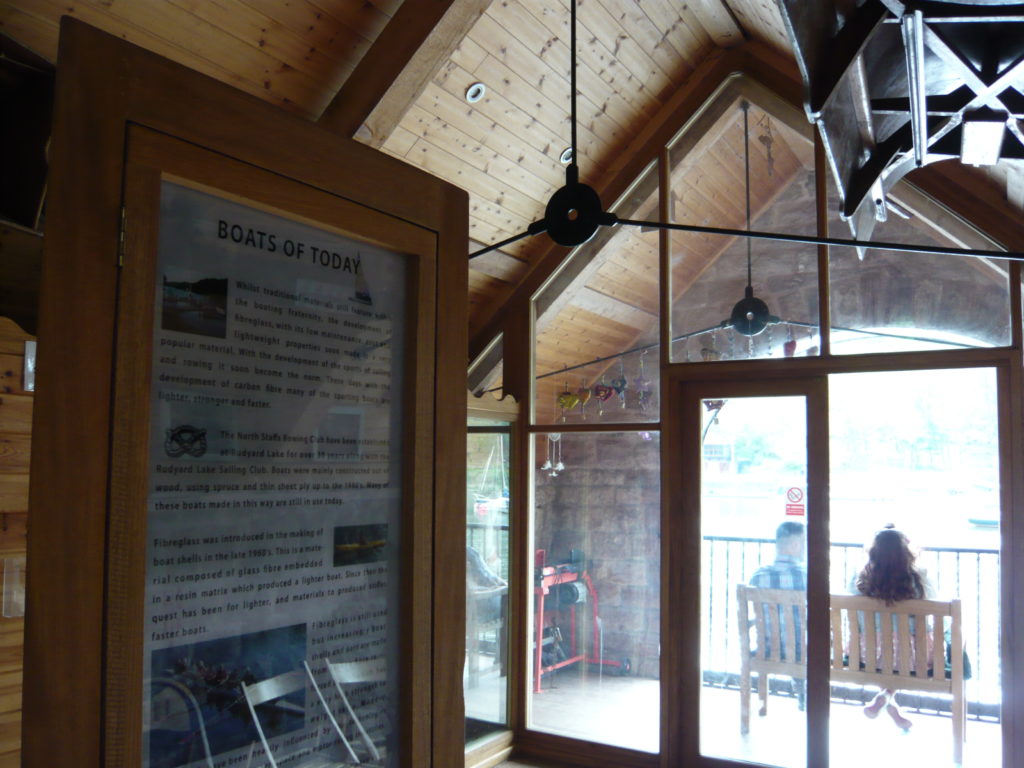 An absolutely amazing tree further on looks perfect for climbing. However, the potential drops put us off being overly brave, particularly for Amy who was wearing small heels. You can at least get some nice photos there though. The rest of the journey up to the northern side of the lake is rather uneventful. Despite this, the views are pretty enough. The best views are of the former boathouses on the other side of the lake that have been converted into rather expensive looking houses. One, called The Lady of the Lake, is reached by a bridge. Very cool. 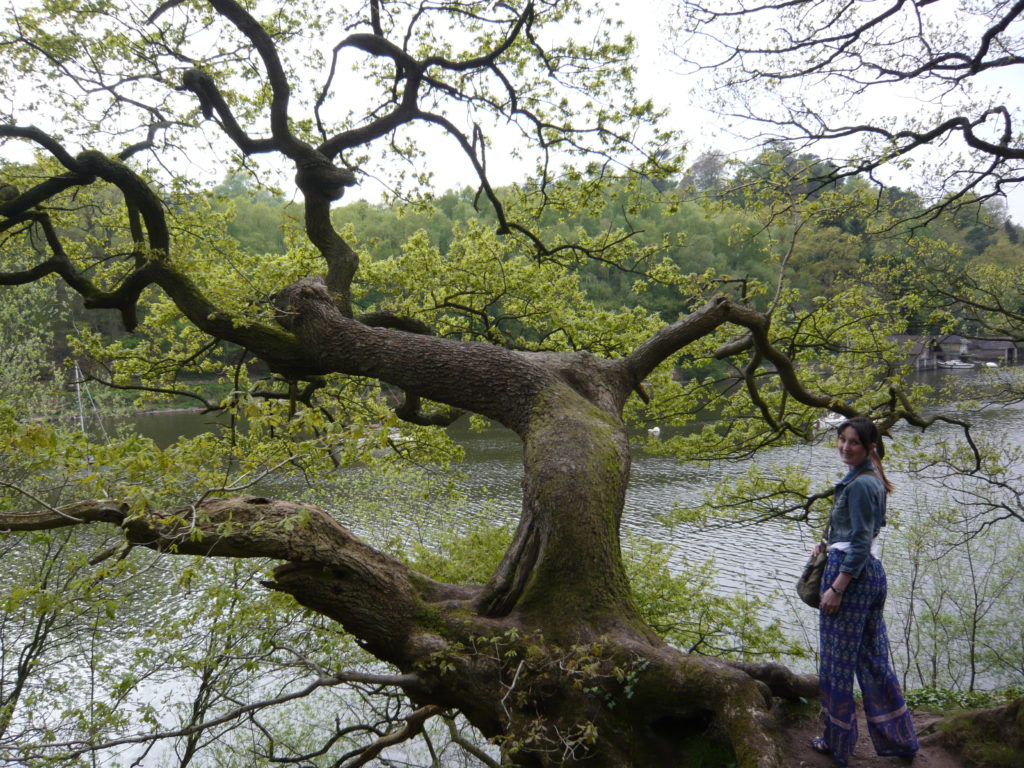 The path deviated from the lake

I found a tree that looked like a reindeer, though Amy didn’t quite agree. As we passed under a bridge, we reached the northern edge of the lake. Unfortunately, the path goes away from the lake a bit here. So much so that we thought we were going wrong. Luckily, I’d picked up a map from the Visitor Centre which confirmed we were going the right way. We passed a small country road where we saw two very old cars pass by. Not old as in vintage, but like 1980s/1990s cars. I think one was an E reg, and the other an H reg. My first ever car was an H reg, a red Ford Focus. 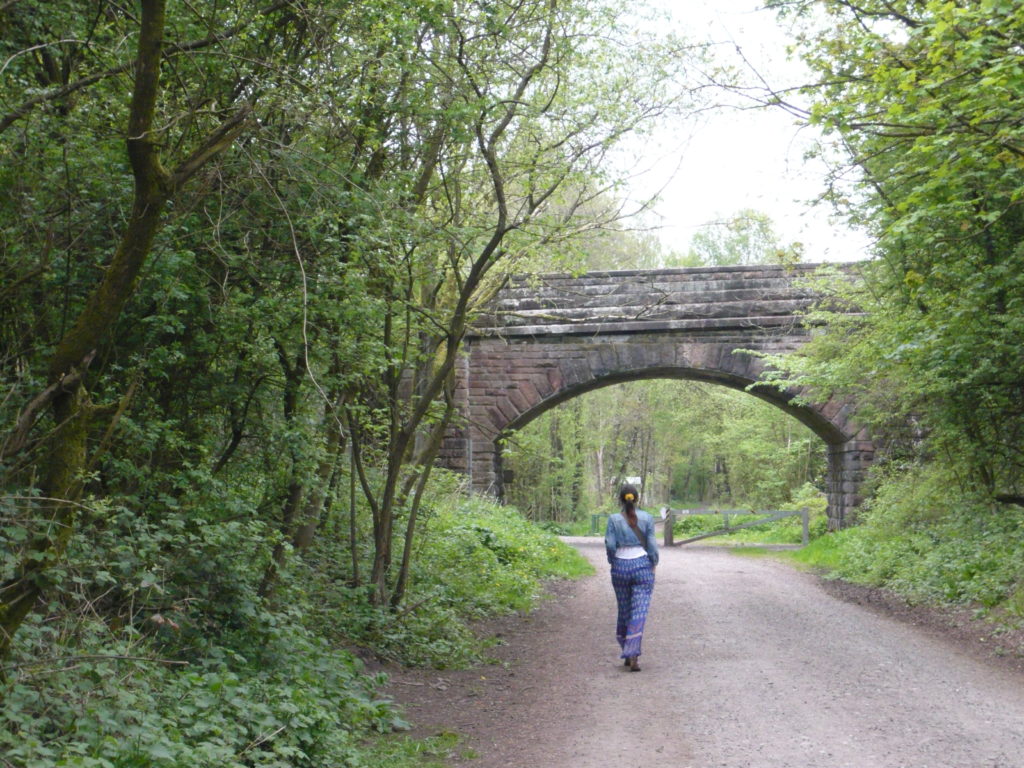 Every now and then we could see a glimpse of the lake through the trees, but mostly this part of the walk was away from it. In fact, the long, winding, and scenic path looked to be going totally in the wrong direction from this point. Many large cows were grazing in the fields either side of the path. One huge cow was moving menacingly slow at the top end of the path, so much so that we thought she was considering charging at us. It turned out that she was hobbling slightly, so we figured she was either very old, pregnant, or injured. 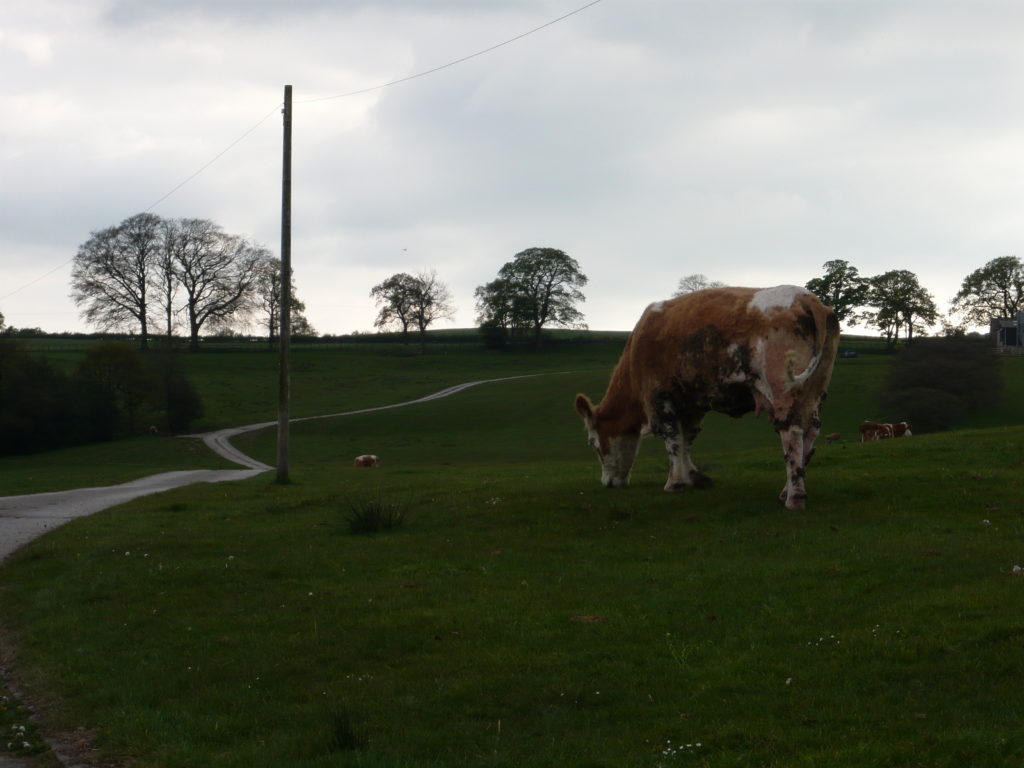 Time had stood still on the western side of the lake

The scenery on the western side of Rudyard Lake was very cool indeed. It almost felt like we had gone back in time, since there was a ‘time stood still’ feel about the place. We saw nobody else, apart from a cyclist. There were a few really cool trees, a really knobbly one, and ones with interesting patterns on their bark. We next came across a rather surprising find – the spooky looking Cliffe Park Hall. With its stone lions menacingly guarding the open gateway, this castle inspired building is all boarded up now. Some of the windows are smashed open. It is clear that the building is no longer used, although perhaps squatters might stay here, who knows? 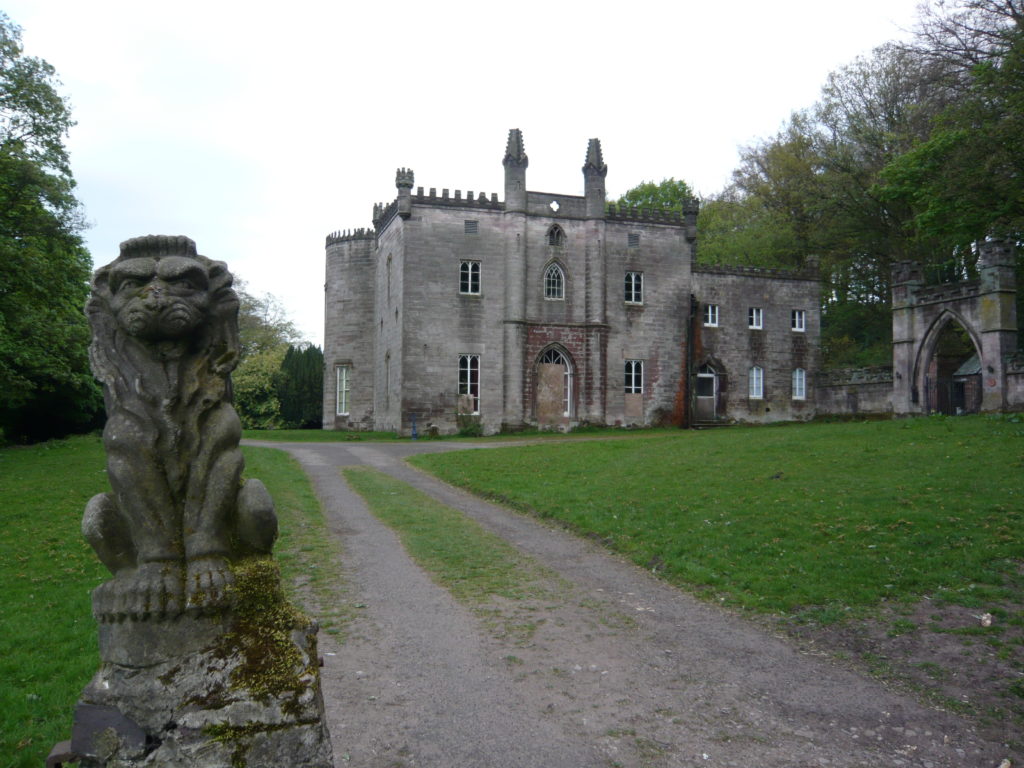 We started to get closer to the lake again by the Sailing Club, where we had our first sailing experience many years ago. The lake looked great whenever we could see it through the trees. The path went behind the houses by the lake that we had admired from the other side, including the Lady of the Lake. This looked idyllic from this side too. Soon enough we were down by the boat house where we had got our rowing boats on our last two visits here. A bunch of teenagers were carrying out a very long boat for a practice. The rest of the lake was pretty quiet though by now, since it was nearly 7.15pm.

Our secret date was to dance by the lake until the sun goes down. The sunset was due to happen at around 8.54pm. Therefore, we headed to the Rudyard Hotel to get some food at this point. We both really enjoyed our meals. We both had potato skins, filled with a mixture of potato, bacon, and cheese, and topped with melted cheese. There was also a wide selection of sauces, and a beautiful salad, to create a real extravaganaza of taste. Visually, it was superb as well, presented on a see-through plate. We weren’t sure if it would be a measly portion, but we each got three of the potato skins. Therefore, we were both extremely full and satisfied afterwards. 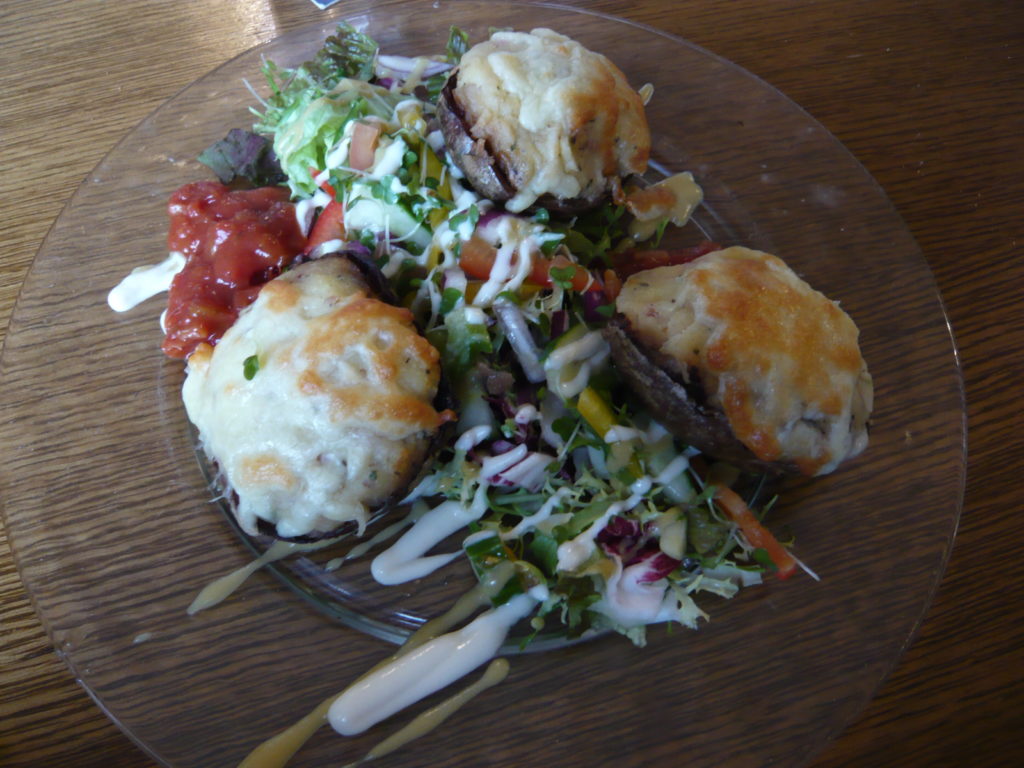 We sat on a large table near to the window by the front of the hotel. A room at the back was offering a carvery, and had many more tables available. Another nice touch of the hotel was the huge, cuddly bear standing by the doorway. There was a seat next to him, making it a perfect picture backdrop. Once we had eaten, we left to do our secret date. 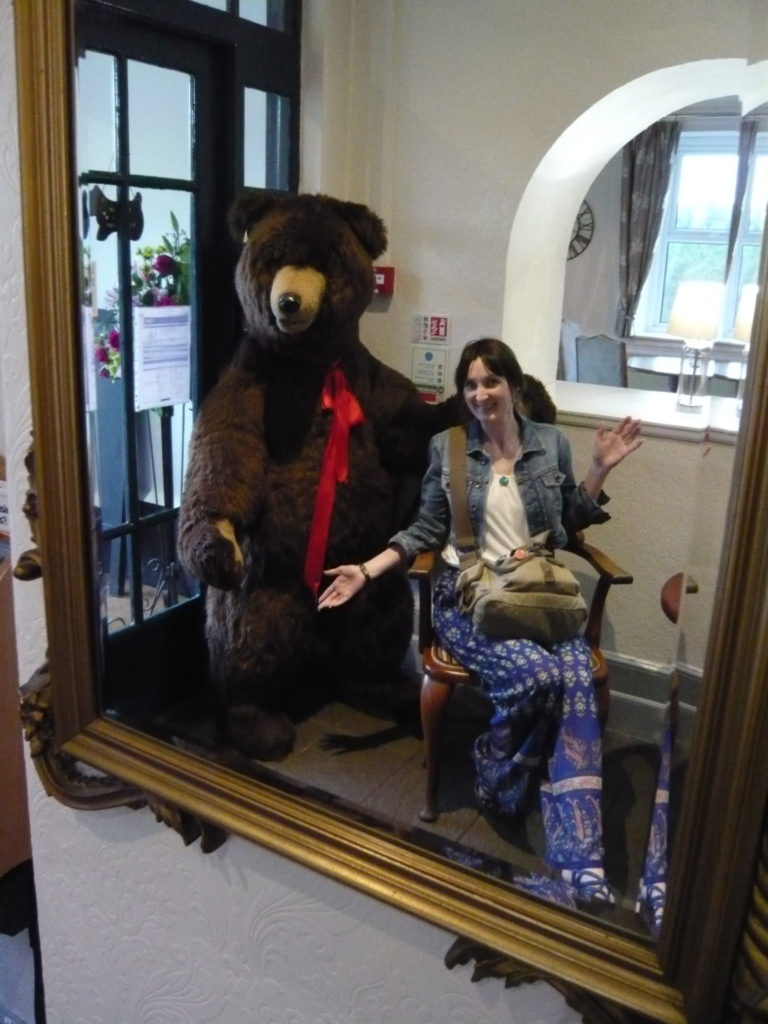 Dancing until the sun goes down

The sunset looked absolutely beautiful on the lake. It was quite surprising that there was hardly anybody else there enjoying it. This worked out good for us though, since we don’t really enjoy dancing in front of people. After enjoying the sunset for a bit, we headed to the eastern side of the lake. Here, we had spotted a few secluded areas next to the water. We set up our radio, and danced away! It was great fun dancing around together. We danced to Oh Happy Day, Michael Jackson’s Stranger in Moscow, Badly Drawn Boy, Buffalo Springfield, and a latin-inspired number from Paul Simon amongst others. Sometimes we did more serious dancing, but mostly we were being silly with each other. 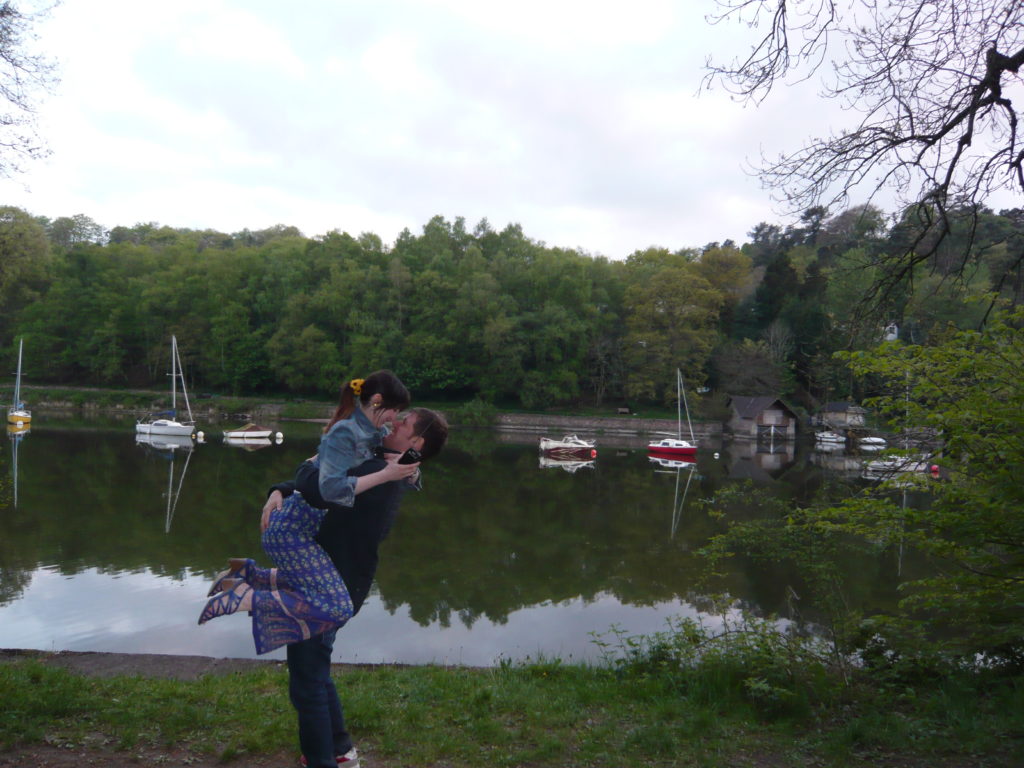 We both really enjoyed this secret date. Combined with a walk around the lake and a bite to eat, it made for a fantastic afternoon/evening out. Why not have a look at your local lake? See what activities they offer, and spend some time enjoying them, before dancing until the sun goes down. It is an utterly romantic way to spend time with your partner! You can pick up a portable radio for a very small amount of money. 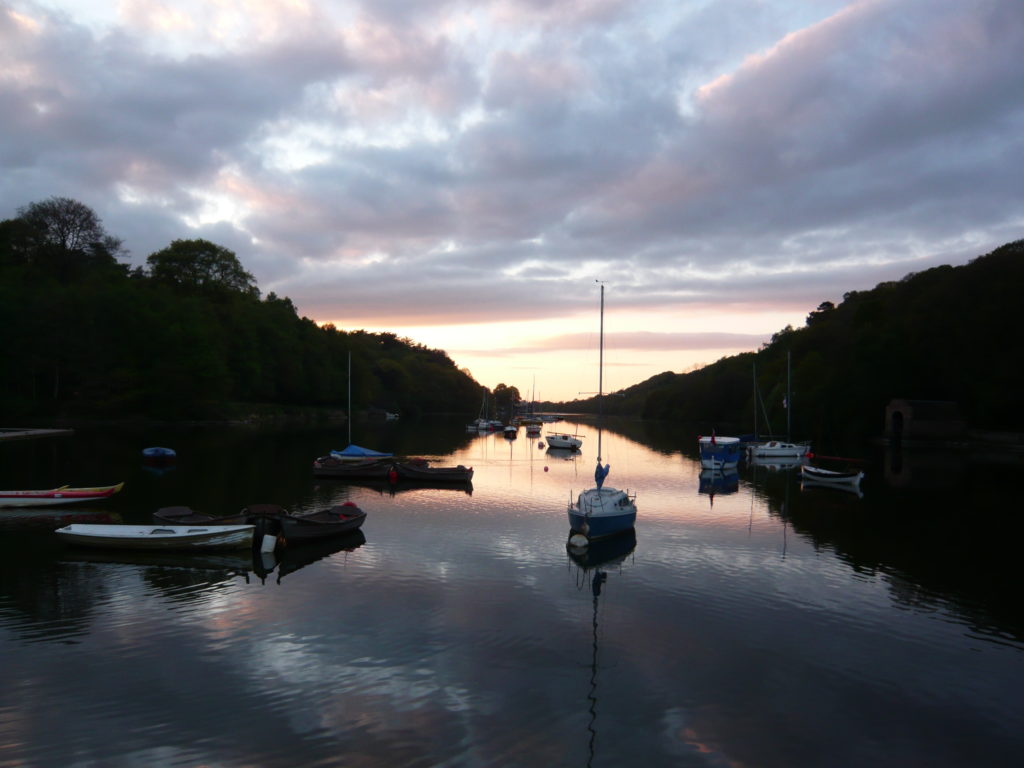 Have you ever danced by the lake with your partner? If so, which lake did you choose?

Amazing Days Out: People’s History Museum, Manchester Dream Dates: The Best Lakes in the World to Dance By