Day 2: From one Burg to Another

Nuremberg – a lesson in how to recover from a terrible mistake

After leaving our lovely host this morning, we headed to the nearby Weissgerbergasse, a remarkably quaint street that is very typically German. The thatched buildings are all various colours, which makes for a charming scene. This was especially true as it was about 8.30am, so there weren’t many people about. We wondered what the posts that jolted out from the top of the buildings were, but later saw on pictures that they were used to display Nazi flags back in the 1930s and 1940s. Definitely prefer how it looks nowadays! 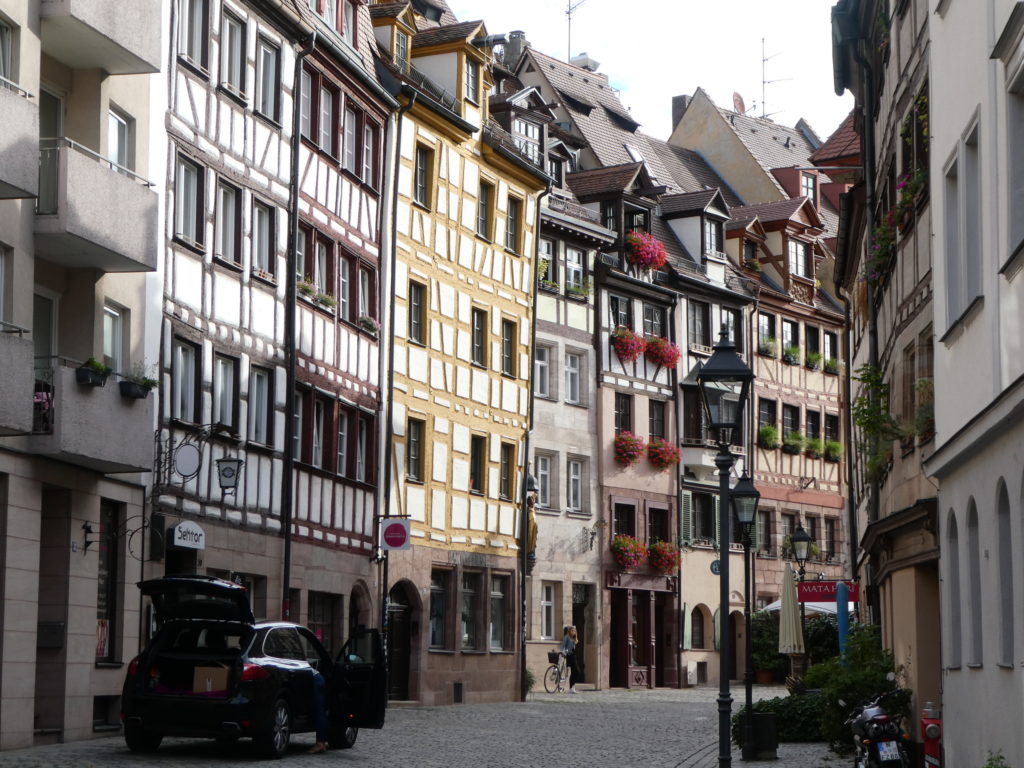 Walking through the town so early in the morning is a real treat, as the architecture is amazing. Despite the fact we went to Nuremberg Castle last night, we’d found out that during the day you can walk through the grounds rather than just to the viewpoint. We decided to give it a go. Sure enough they are very picturesque. The Sidwell Tower, which dates from the 1200s, needs a ticket. However, there happened to be a ticket just lying there. Despite Amy’s protests, I couldn’t resist. Therefore, I went up a daunting and winding staircase high up to the top of the tower. Up there are some of the best views of Nuremberg, from all angles. I didn’t want to dawdle as Amy was at the bottom and I was hoping she would end up going up too. Unfortunately, the ticket wouldn’t work again for Amy. 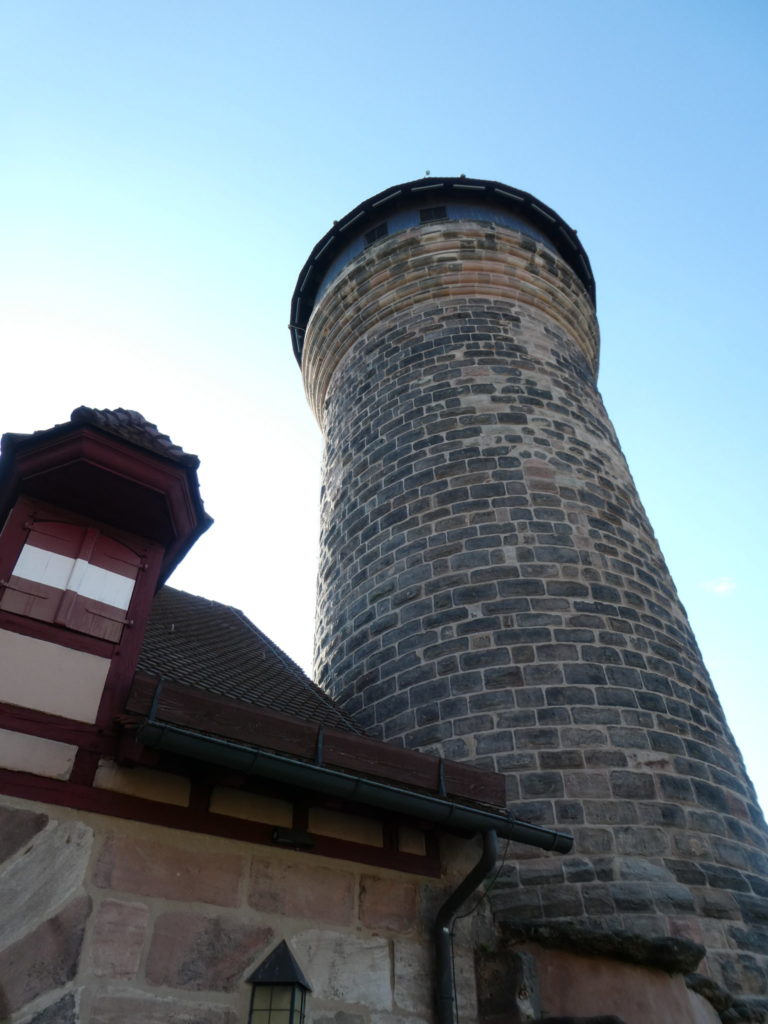 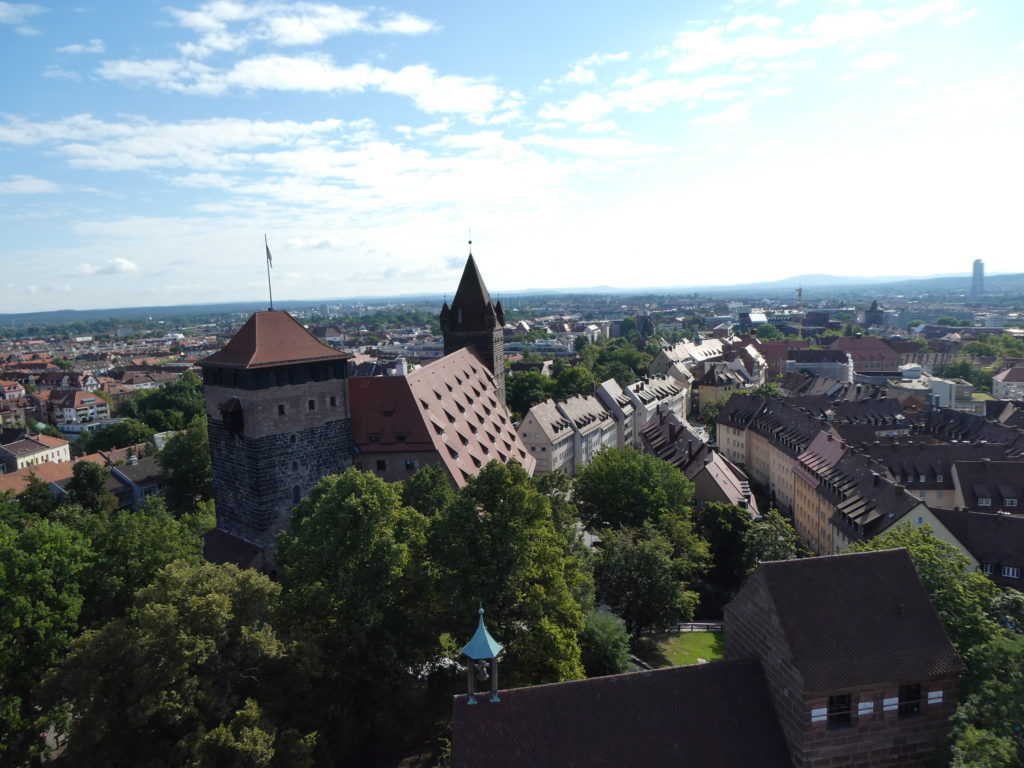 Nuremberg has some remarkable churches

After enjoying a stroll around the impressive castle grounds for a while longer, we made it down the ramp. St Sebald Church was open when we came down. This place really impressed us, with a beautiful gothic interior. Painted statues of saints and the like seem extremely popular in Nuremberg. A prayer area with candles hid a scary looking knight in the darkness behind. 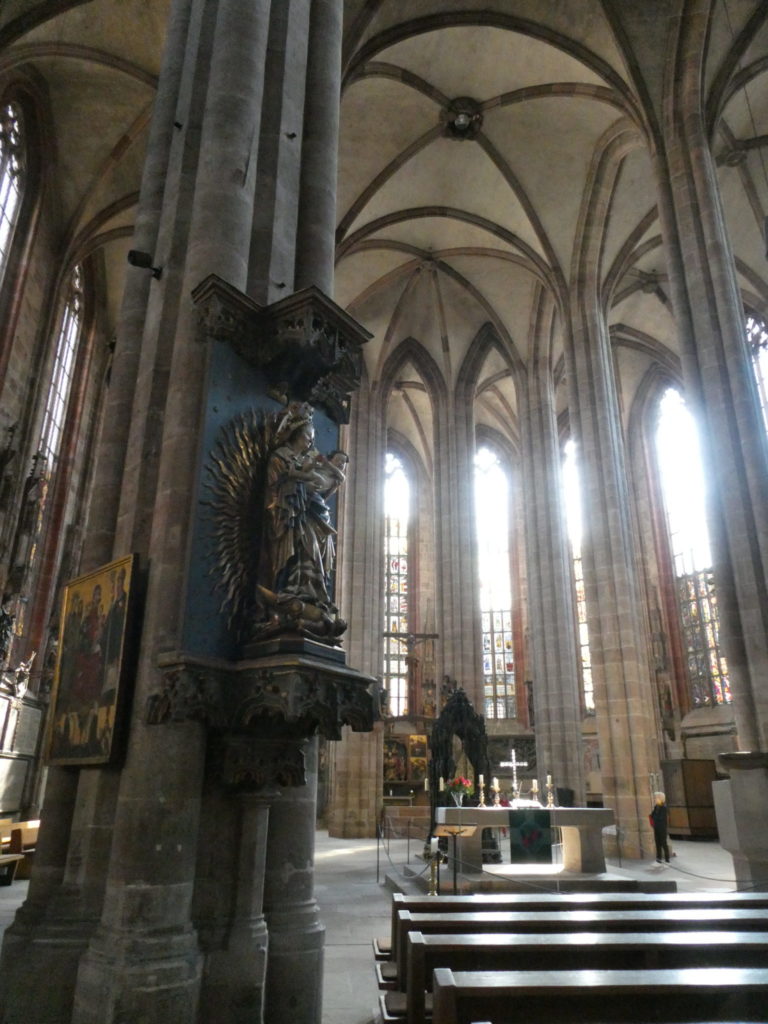 This church was pretty heavily damaged during World War 2, but they don’t forget the damage caused by the Germans in other countries, with a memorial to Coventry Cathedral inside. It is a really impressive church that wasn’t really on our radar. We were just looking at whatever we found, from a tempting bakery, to works of art, to traditional German clothing modernised and on sale in high street stores. 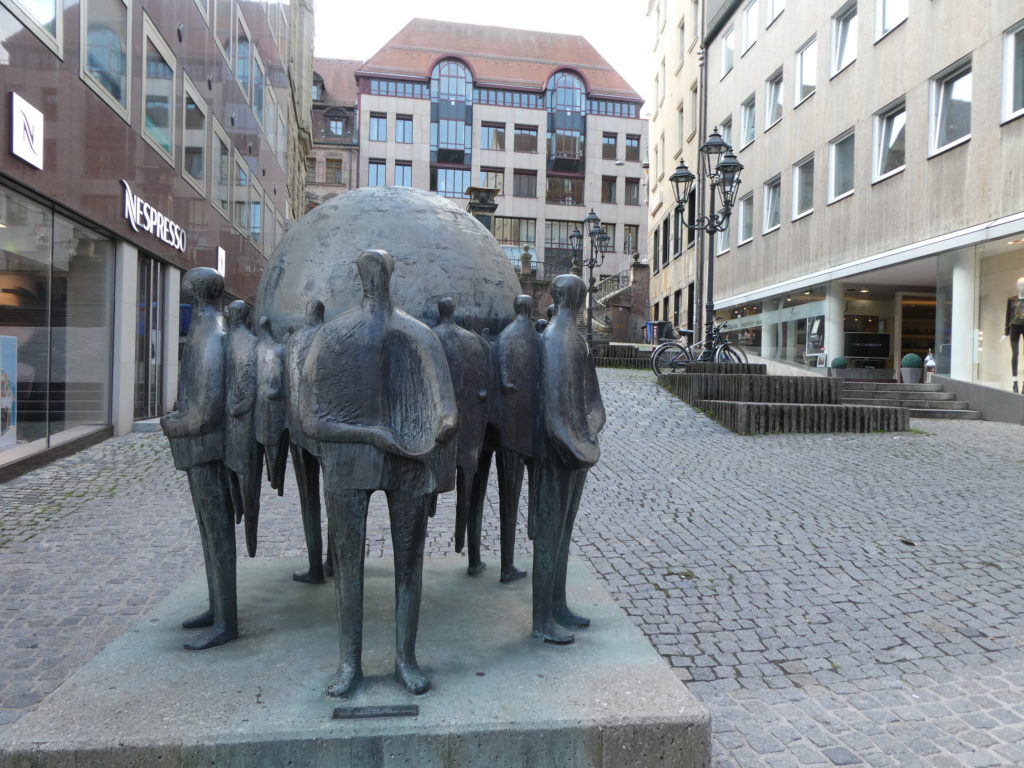 Another fascinating discovery was the Marriage Merry-Go-Round. This over the top fountain is based on a German poem from the Middle Ages. Whilst we are huge advocates of marriage, this fountain has a somewhat more pessimistic view. All kinds of lurid characters show a couple from the dating phase, to becoming old and fat, to death. Not normally the sort of thing we would talk about on Planet Full of Love, but it was brilliant! 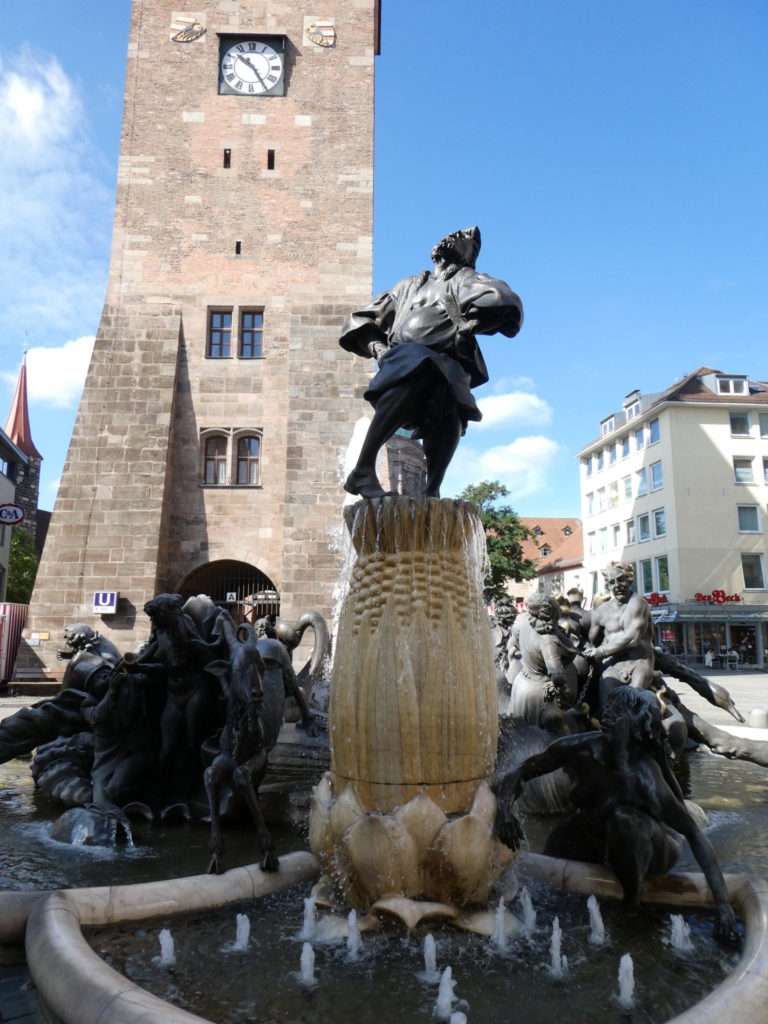 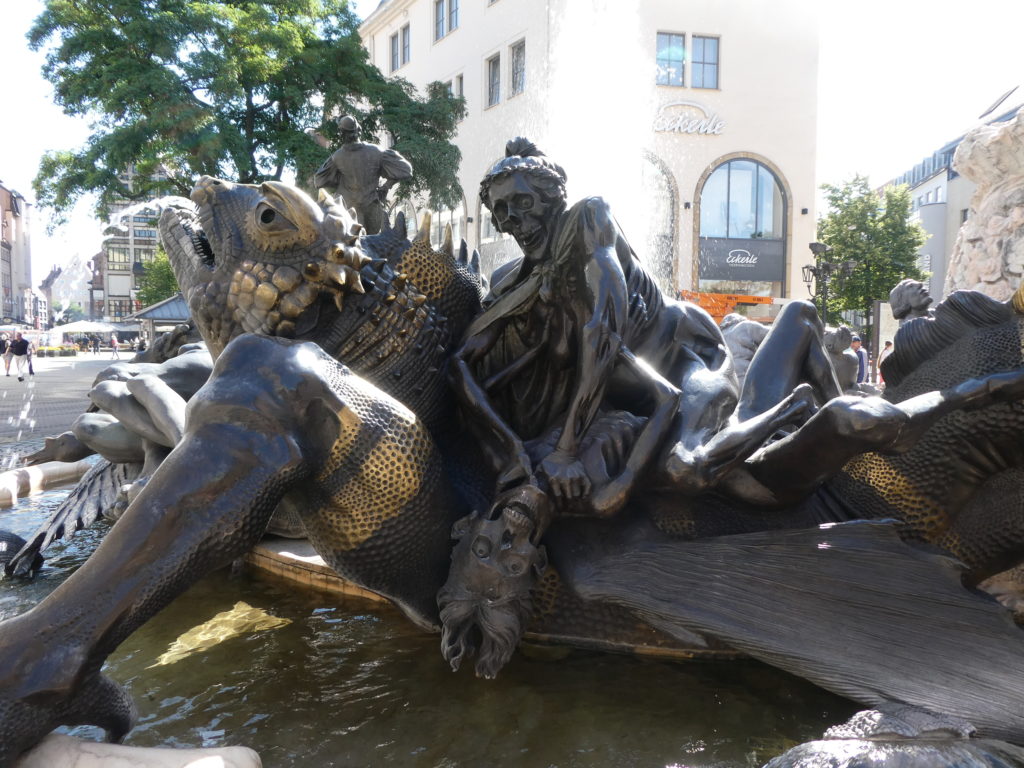 German food is kind of alright!

We grabbed some butterbreeze for lunch from a street vendor. This is basically a pretzel, sliced in half and caked in butter. Delicious, and cheap. The St. Elisabeth Church was an imposing building that we happened to wander inside of, that didn’t really look like a church from outside. It doesn’t look like one inside either, but some kind of classical dreamworld. The crypt was a rather solemn place though. 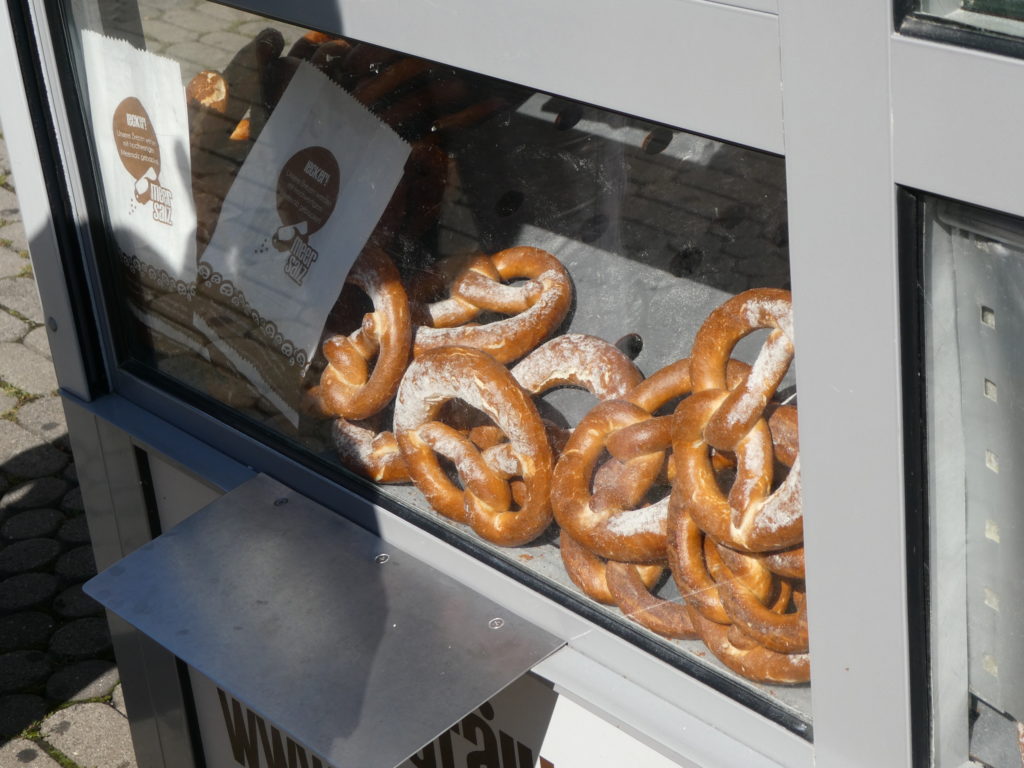 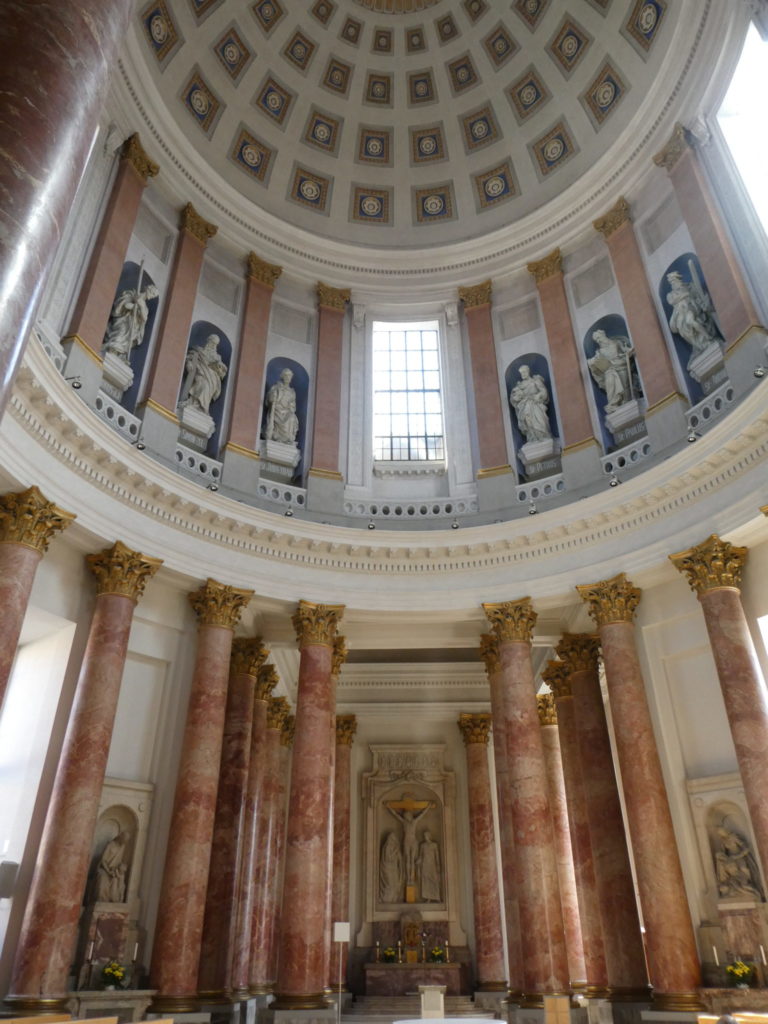 There was another church opposite, called St. Jacob Church. This one was also highly impressive, with works by Veit Stoss, and a staircase that took you to a great view from above the church. A walk through Nuremberg’s less salubrious areas found us an English pub, of course. It looked nothing like an English pub from the outside though, though it was called the Kings Arms. That counts, right? 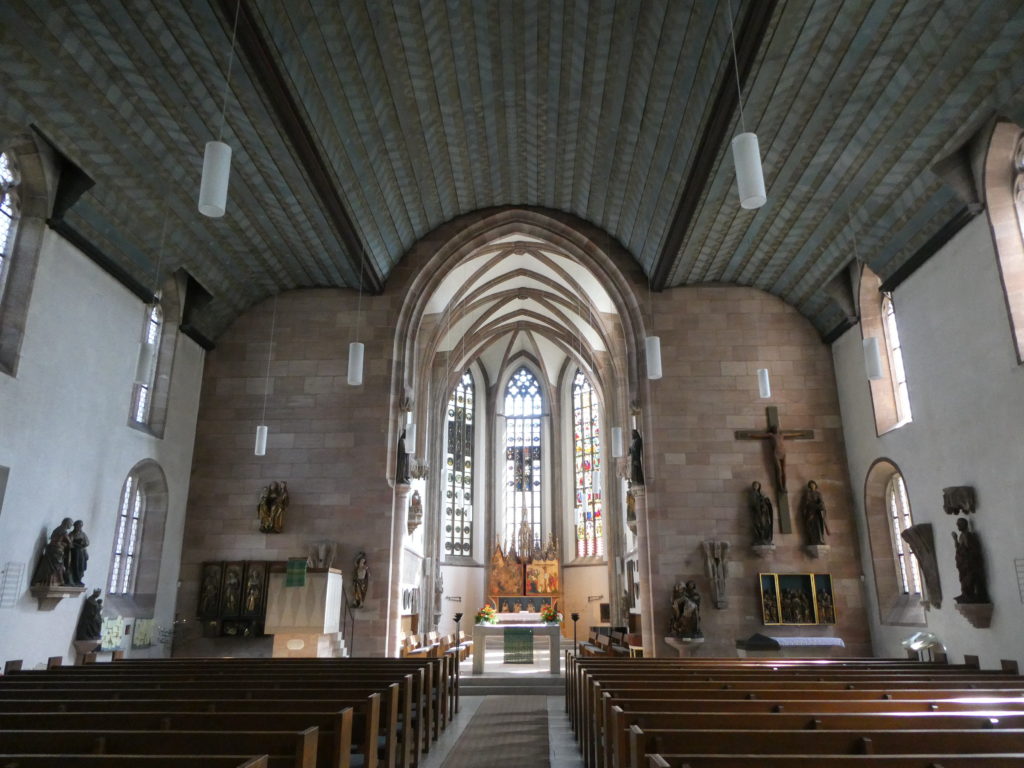 A stroll to the train station took us past the Way of Human Rights, this time in better weather conditions. A day ticket for public transport in Germany for two adults (called a TagesTicketPlus) is cheaper than two one way tickets to Bamberg, where we were going later. Plenty of money-saving tips for German public transport. This allowed us to visit the Documentation Centre and Nazi Party Rally Grounds via tram, where we saw Nuremberg’s darkest moments. 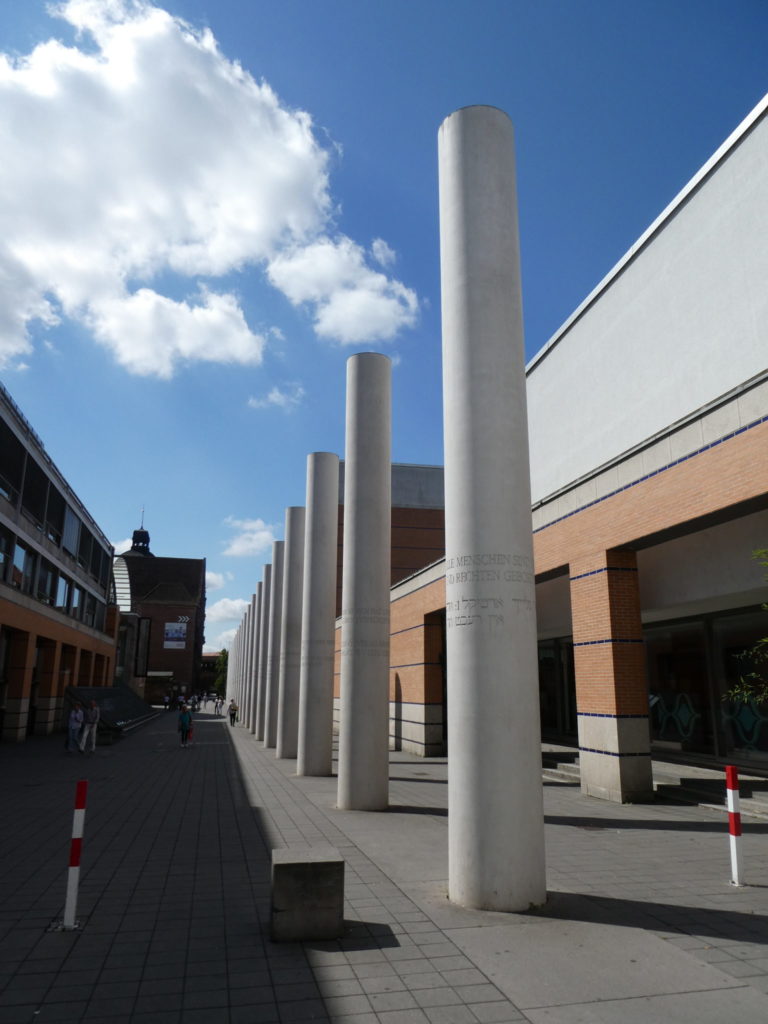 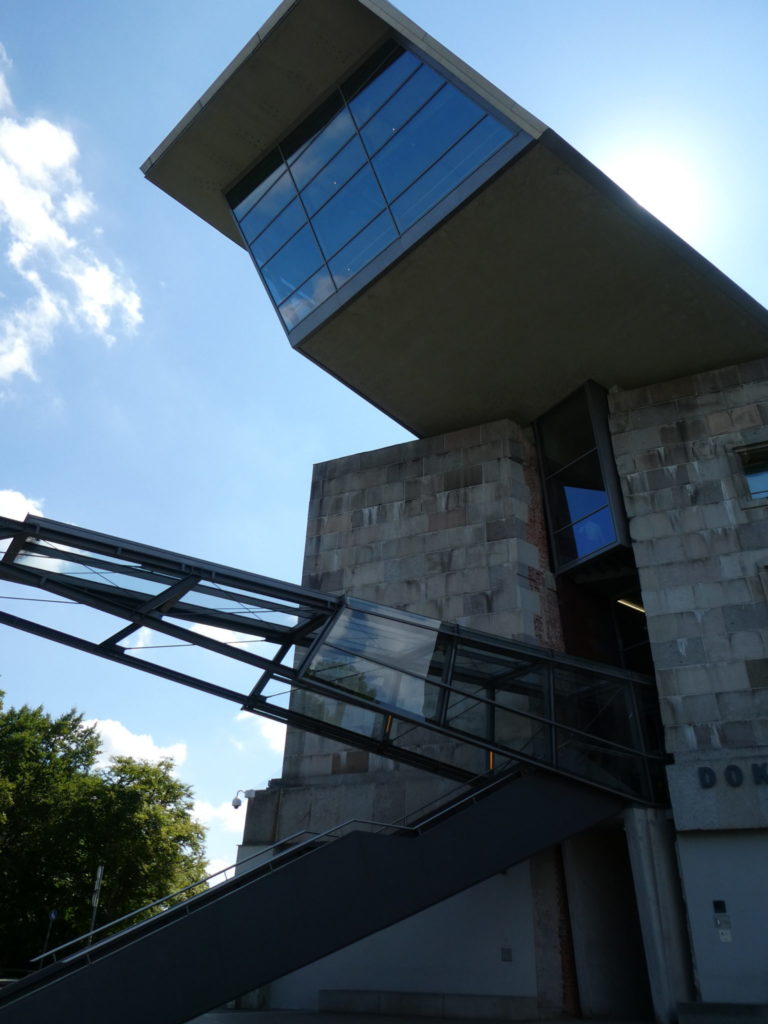 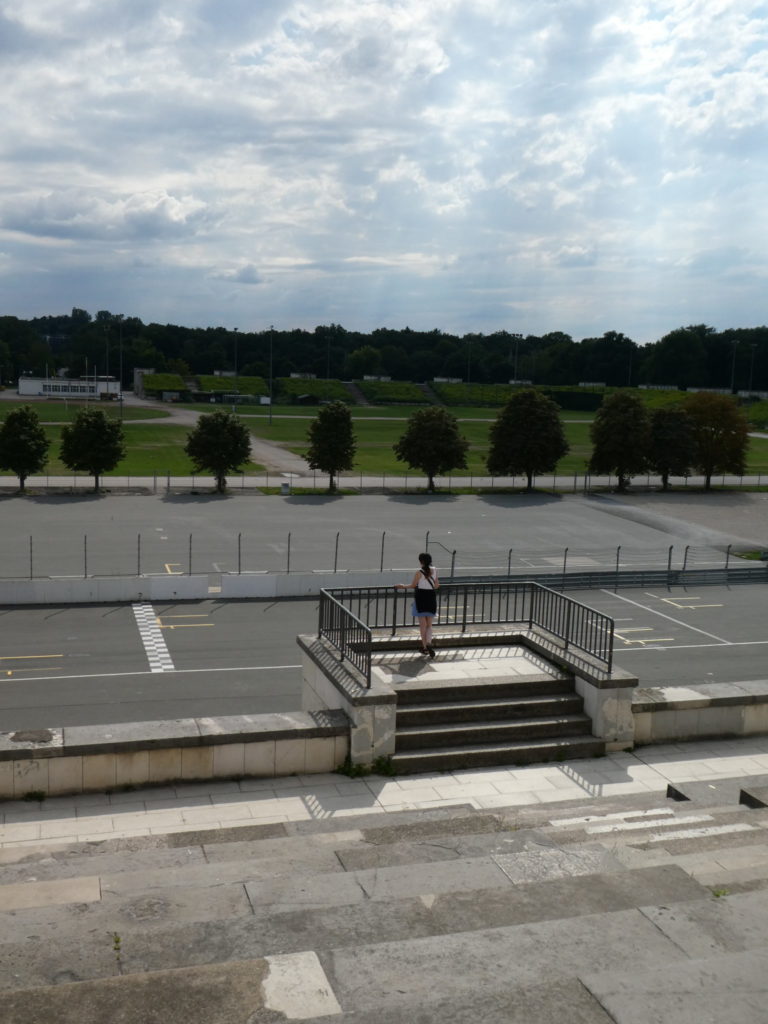 A look at how humanity can really fail

We were welcomed at the Documentation Centre, and given a bit of info and some maps and things before we started our tour. The Documentation Centre is a museum that tells the story of the rise and fall of the Nazi Party. It is a fascinating story, that should serve as a permanent reminder to never let such a thing happen ever again. It has always been perplexing as to how Adolf Hitler can have had so much influence, and it is told in a clear and thought-provoking way here. Although the information is in German, an audio guide translates it to English. 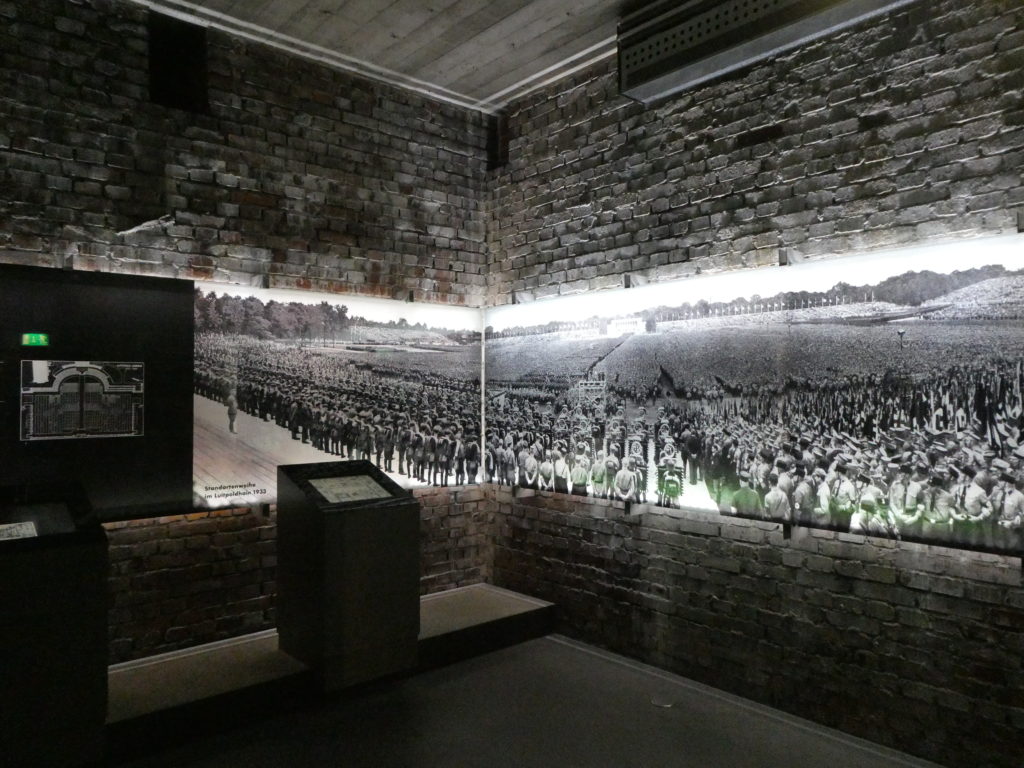 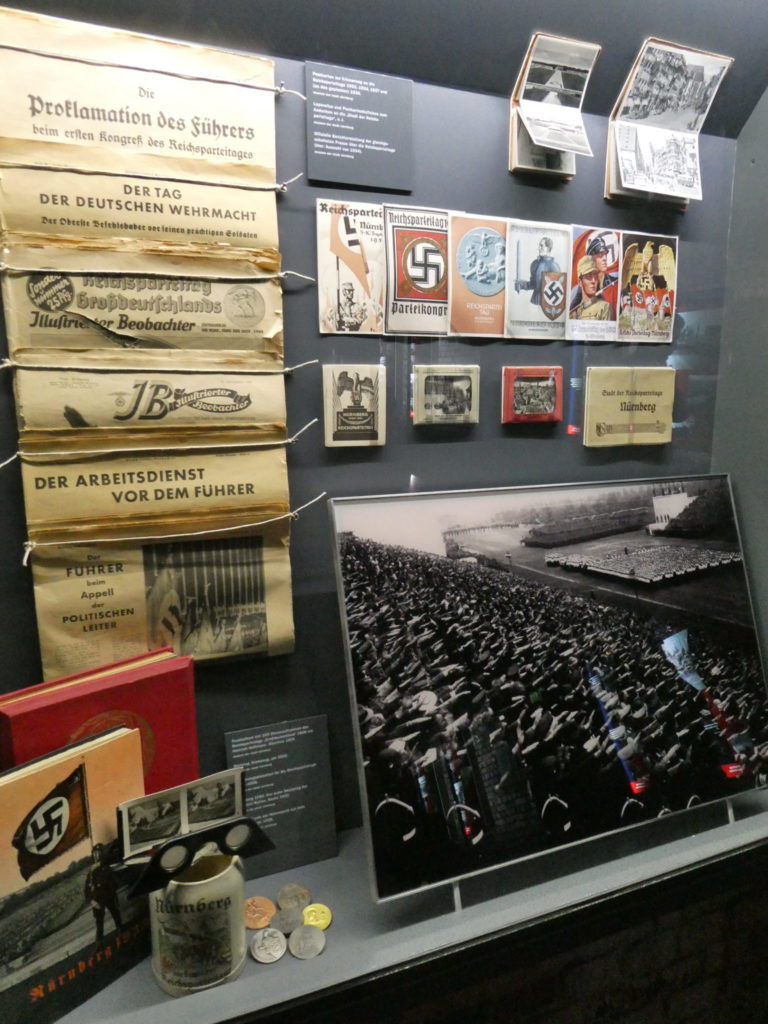 Afterwards, we walked around the Nazi Party Rally Grounds. To be honest, we couldn’t believe that these places still exist. After visiting Auschwitz-Birkenau, this comes a close second as to bringing home the terror of Hitler. We saw the Colloseum-like structure that was to have been the Party’s Congress Hall. Everything was on a huge scale to make the people who visited feel small and insignificant in the grand scale of things. We’re sure you don’t need convincing that Hitler was a megalomaniac, but this place is proof alone. 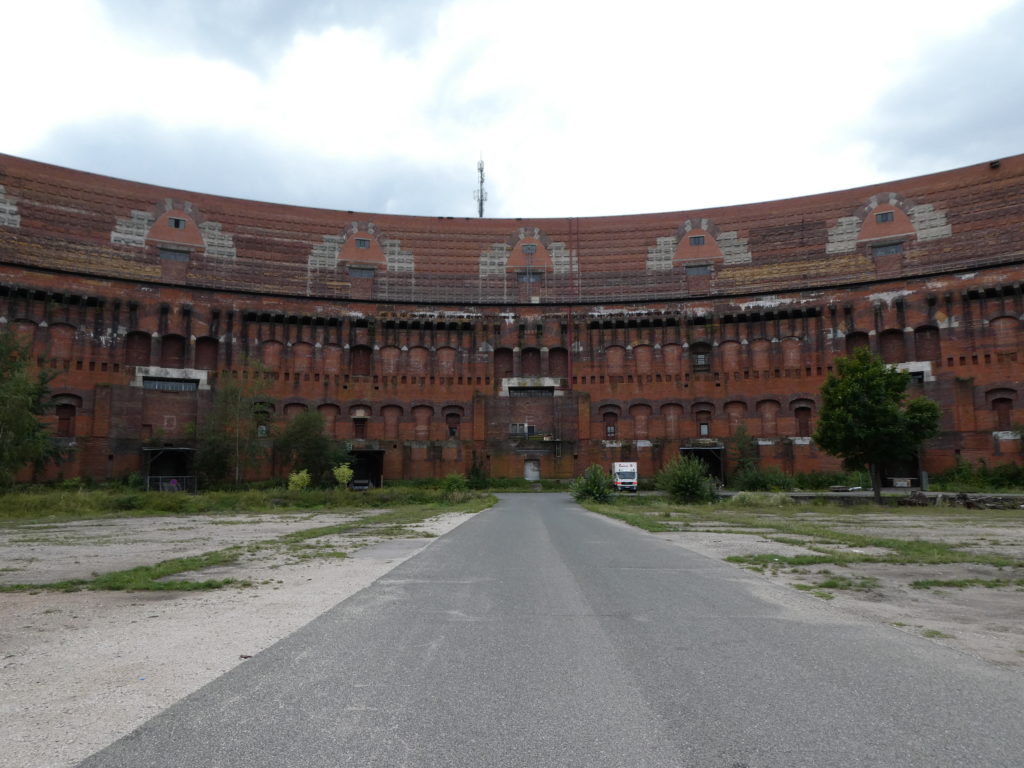 A fairly long walking route takes you around to the ‘Great Street’, an immensely long street that was to have been used as a marching ground. The highlight of the visit though is the Zeppelin Fields. You can actually walk on to the platform that Hitler used to address humungous crowds of mesmerised Nazis, It is a very eerie feeling indeed. It was our last stop in Nuremberg, where the trials of those responsible for the war crimes took place too. 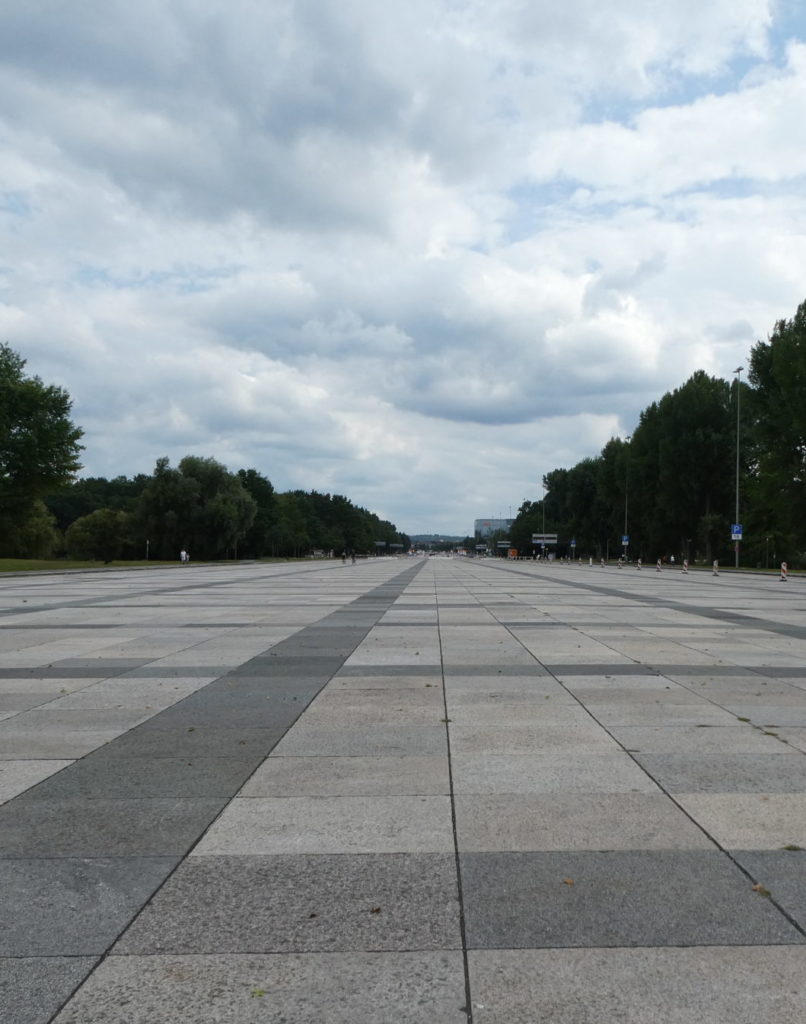 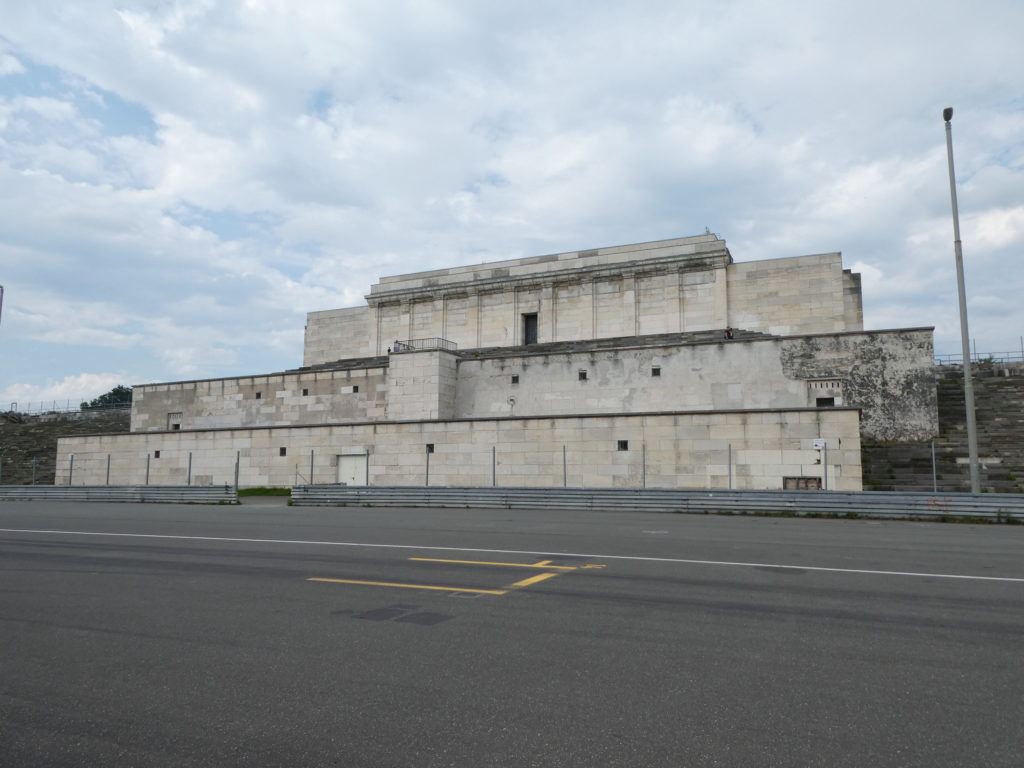 Bamberg – a pretty city with a famous drink

A short train ride took us to Bamberg, where we saw plenty of mediterranean-style houses as we walked to the house of our friendly hosts. The house, and indeed the entire city of Bamberg, is a UNESCO World Heritage Site. We tried some German beer and had a mini jamming session, before heading out to try Bamberg’s speciality – Rauchbier. Rauchbier is smoked beer, made only here in Bamberg. 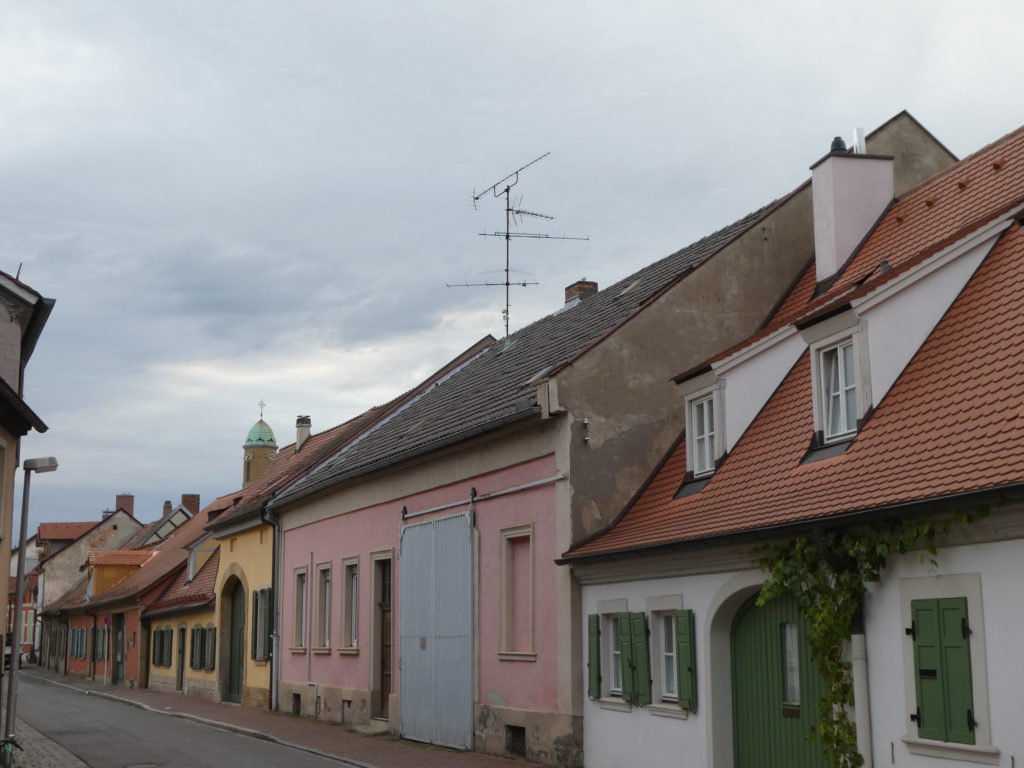 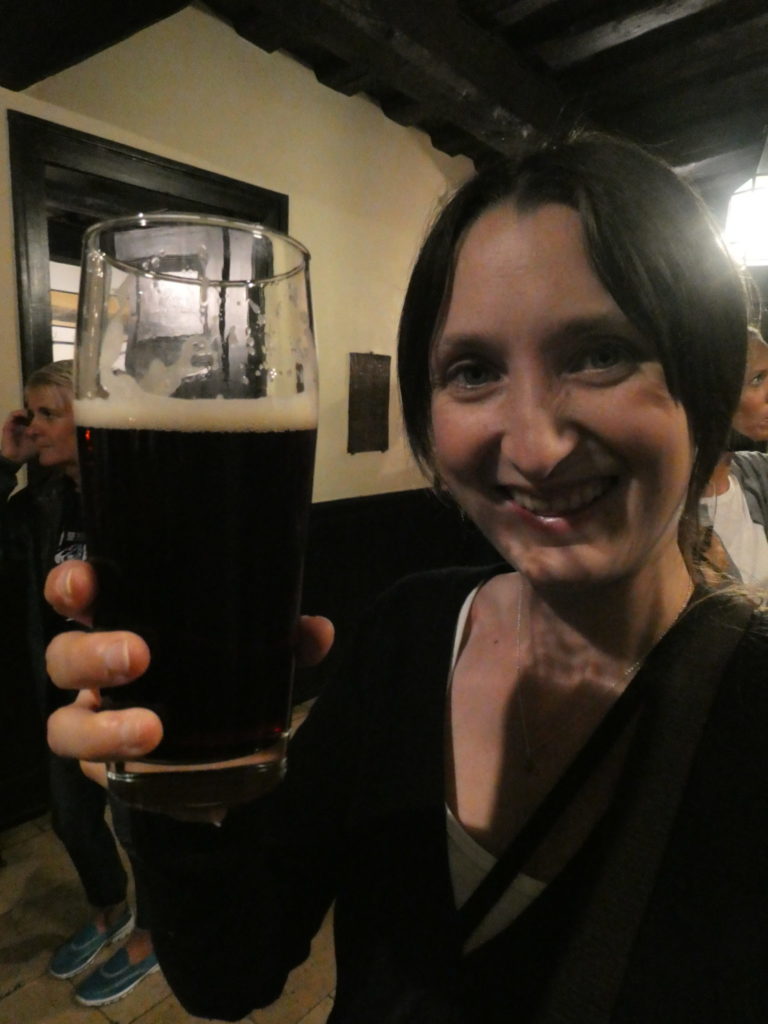 The best place to try it is the beautiful Schlenkerla pub. Here, since 1405, smoked beer has been brewed. Tapped directly from a wooden barrel, you order it from a hatch rather than from the bar. This historic drink was very drinkable, though it strangely tastes like bacon! A pint costs 2 euros 90. However, you pay a 2 euro deposit on the glass. What this means, however, is that you are free to take your pint of rauchbier anywhere you like. 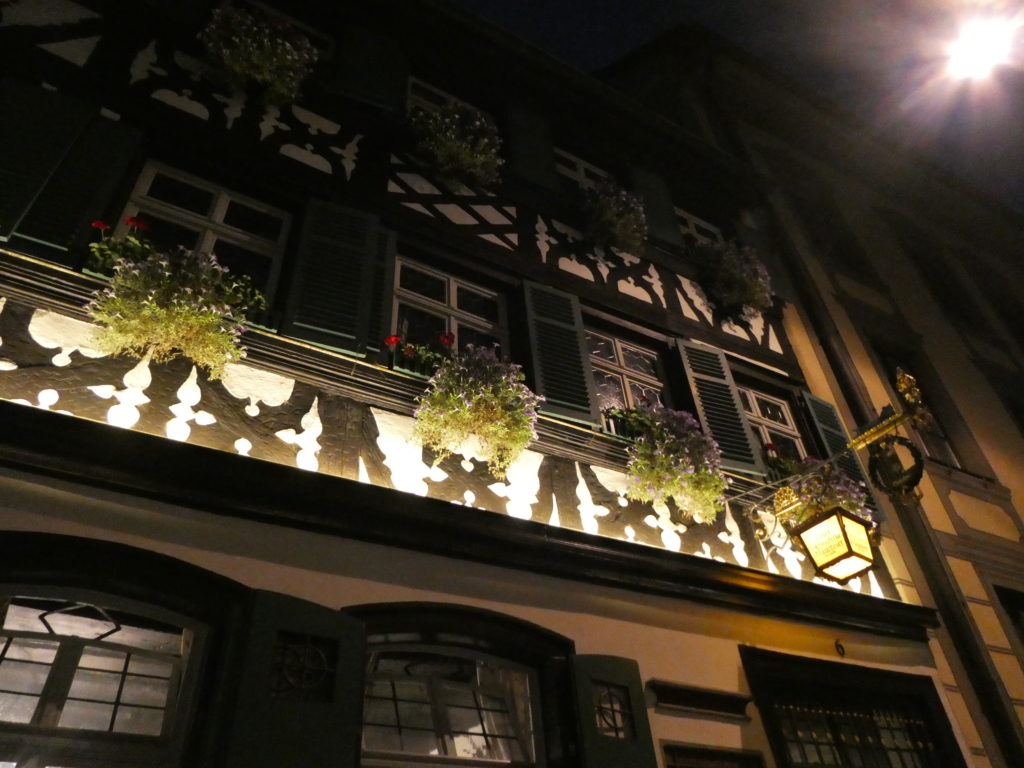 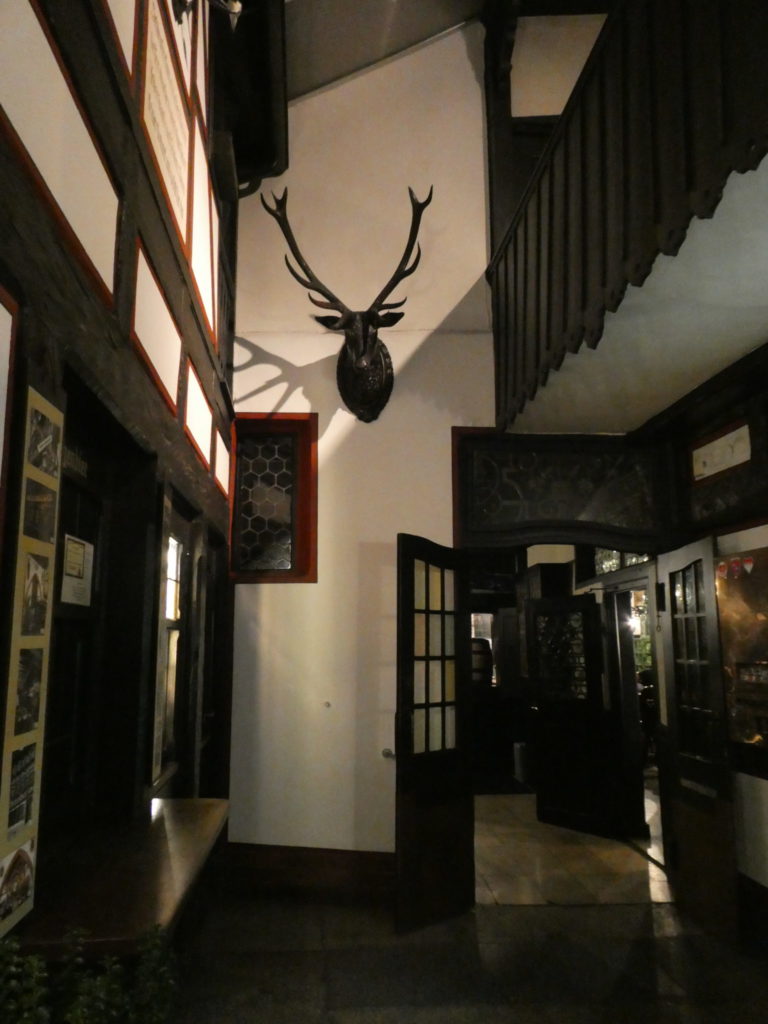 This meant we could enjoy a nighttime tour of Bamberg’s most historic areas, as well as a look at the sadly just-finished Jazz and Blues Festival, whilst we drank it! Bamberg is most definitely a place that suits street drinking. The bridges are often full of drinkers, even on a Wednesday night like tonight. It is a university town, however, and is a bit of a ghsot town when the students go home apparently. 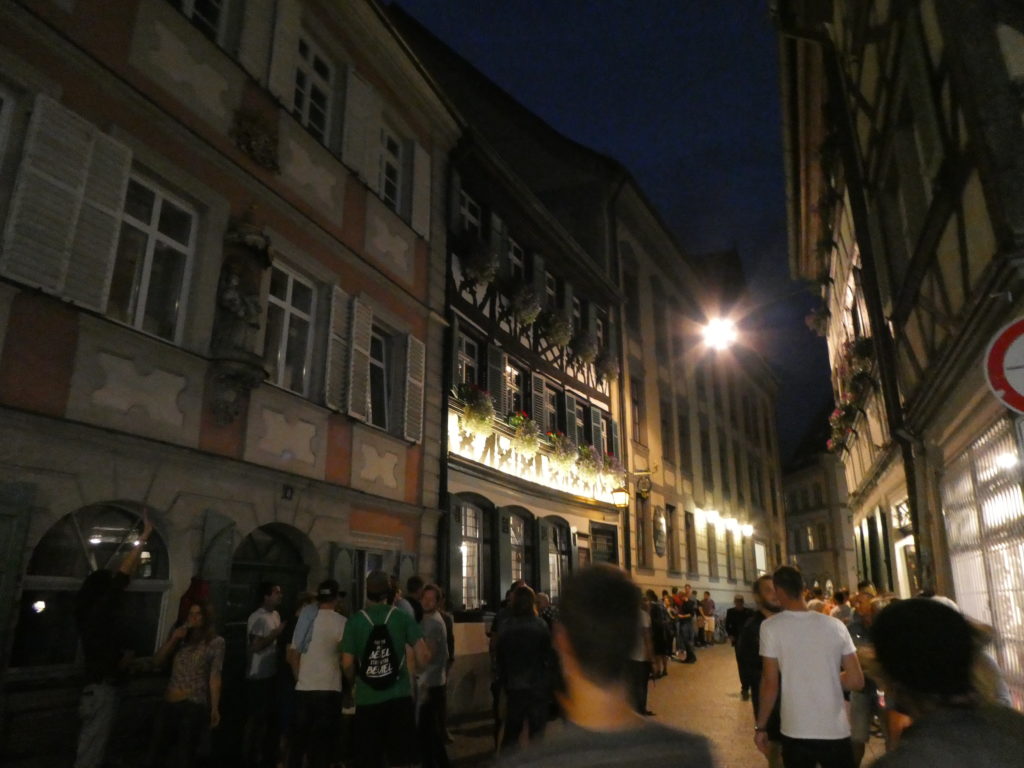 Can’t wait to explore Bamberg in daylight in the morning. Then, we head to the Czech Republic and the spa town of Karlovy Vary!