How Good is the Nightlife in Golden Sands?

We visited Golden Sands, in Bulgaria, on a last minute trip. Part of the appeal for us was the promise of the area’s nightlife.

But how did Golden Sands measure up?

Well, to put it this way, we were out until late almost every night of the trip. We found Golden Sands to be a great resort, with a great mix of options. As with most resort destinations, you need to pick the time you visit very carefully. It will be extremely quiet outside the peak summer season. June to September is best. If you want a great night, then head to Party Street.

The main landmark here is the huge pair of legs that point the way to must-visit club Bonkers Disco. However, be warned that going through the wrong door here actually leads to a strip club called Bar Playboy. We found out this the hard way on our first visit to the club. We went straight inside, sat at the bar, and realised after a short time that there was a semi-naked woman dancing on the other side of it! Bonkers itself though offers some great vodka redbulls, and a very lively and diverse crowd. I believe that they sometimes offer all-inclusive drinks deals, but we saw no sign of that on our visits. 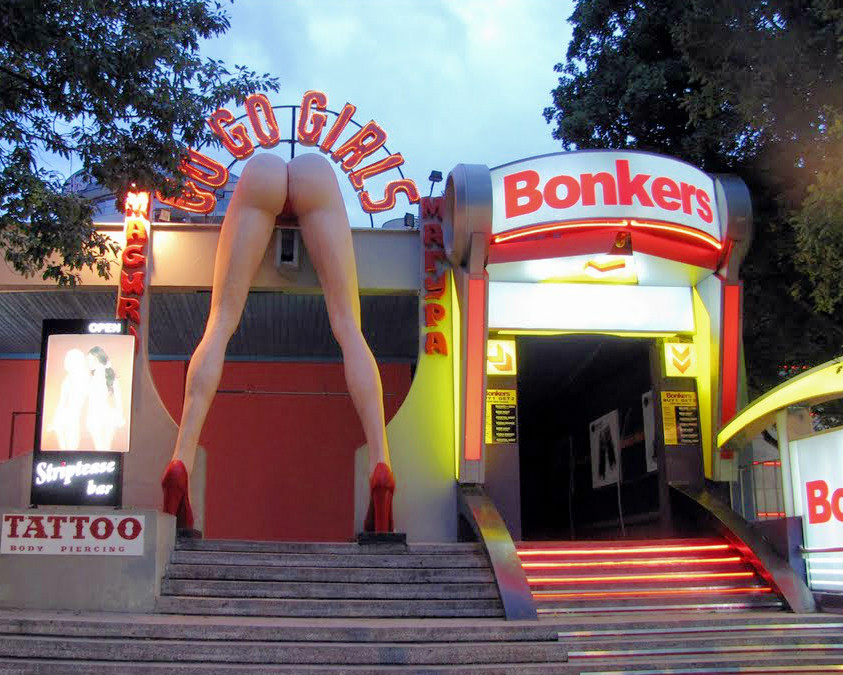 Arrogance Music Factory is well advertised as one of the coolest nightspots in town, and we decided to try it. This is much bigger and more spacious than Bonkers, with a decent music selection. However, we actually found it rather devoid of atmosphere in comparison. It was also extremely hot inside. People are in general dress more stylishly in Arrogance. There seemed to be a higher percentage of locals in there too. We think that if you visit here first, you would be impressed. However, given the choice between posing in Arrogance, and partying in Bonkers, you’d be silly to go for the former. On the other hand, it does have the advantage of multiple rooms if you get fed up of one type of music.

To save a bit of money, you can buy a discount card sold by Party Boss. This gets you into many of the nightclubs free of charge, and also gives discounts in many restaurants and bars too.

However, be warned that we had one bad experience getting a taxi home from one of our nights out. We actually walked everywhere, since we stayed in a central location. Despite this, on one of our nights out, it started to rain heavily as we left the club. Due to the balmy evenings, we didn’t bother with a coat. Therefore, we were walking along the road getting drenched to the bone, when we spotted a taxi. Deciding it was worth the small cost, we jumped in, and gave the taxi driver the name of our hotel. Being dark, and not knowing the roads, it wasn’t until we arrived that we realised that he had brought us to the wrong hotel!

We told him that we weren’t where we asked him to take us. He insisted that we must pay for the initial journey too, if he was to take us to our hotel. He made out that we had told him the wrong destination, when it was clear that this was a scam to get more money out of us. We initially refused to pay the extra, but to be honest, we felt a bit vulnerable so ended up paying. I made sure to give his car door an extra loud slam when we got out though. I loudly called him a scam artist as soon as we were safely out of the vehicle.

Another downside was that there are a lot of feral dogs around. Just be careful if you haven’t had a rabies shot, as I’m not sure I would take any chances. Also, lots of women hang around on Party Street. They didn’t approach us, but we heard that they are there to take advantage of gullible foreign tourists.

What else is there to do at night in Golden Sands?

The resort is close enough to enjoy a night out in nearby Varna as well. Varna is easily reachable by taxi, though be sure to take heed of our taxi warning. However, we enjoyed Golden Sands own nightlife so much that we didn’t venture any further.

Apart from dining in the fantastic and cheap restaurants you mean? We attended the Variety Kolibite dinner show, and found it thoroughly entertaining. It has been going for over forty years, which is testament to its appeal. You will find it in a forest area just outside of the resort, but it is easily reachable. We actually went with an excursion, not realising it was so close. On arrival, they welcome you with an old Bulgarian custom of bread and salt, and a sip of rakia.

The meals are buffet-style, but there is plenty of choice. The drinks are very unusual, in that you can pour your own wine directly from the barrels! The first act of the show deals with the area’s folklore. It gets much more dazzling in the second act, with UV and fire acts, show girls, circus acts, and illusions. They also demonstrate walking on hot coals before you depart. 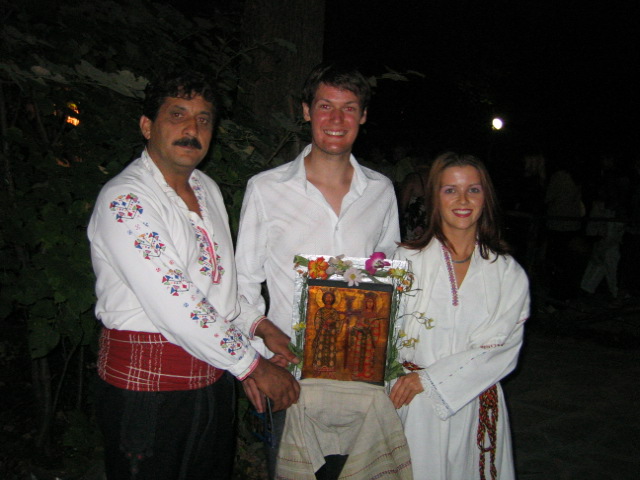 There are plenty of great bars too, with cheap cocktails galore. Many bars have live sports games on TV, or karaoke too. A large casino sits by the beachfront too, though we didn’t get chance to check it out.

It does feel like Golden Sands has slightly passed its heyday. However, if you are looking for a cheap and cheerful resort, with lively nightlife, then it is a great option.

Have you ever been to Golden Sands? What did you think of the nightlife?

Our Fifteen Year Anniversary! How to plan the most amazing trip ever (in just NINE steps)