If you’re visiting Cesky Krumlov, chances are that Cesky Krumlov Castle is going to be your first stop. It should be, as it is a true wonder of the world. As well as the tower and museum, there are three main sightseeing routes around the castle. One features the original castle interiors from the baroque and renaissance periods, another the rooms of the Schwarzenberg family from the 1800s, and the third allows you inside the Castle Theatre. 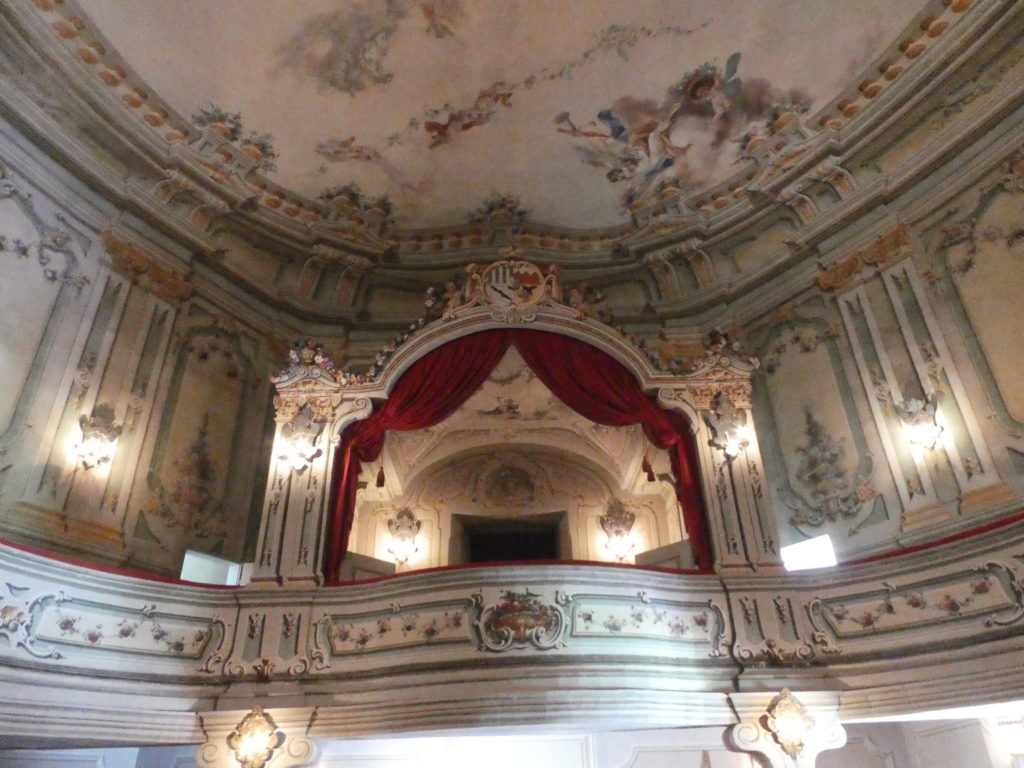 If you’d like to visit the Castle Theatre, and you really must try, get your tickets early since they only allow a small number of people in each day. It is only open seasonally to add to the rarity of the experience. They have to severely limit the amount of people that can go inside, due to the effect of moisture caused by visitors. It is very precious.

The Baroque Theatre is the highlight of the castle. Each door has its own large skeleton key. These are the original keys from the 1700s! When we went in, we were amazed. It is the best preserved baroque theatre in the world, one of only two that are so well preserved, the other being in Sweden. 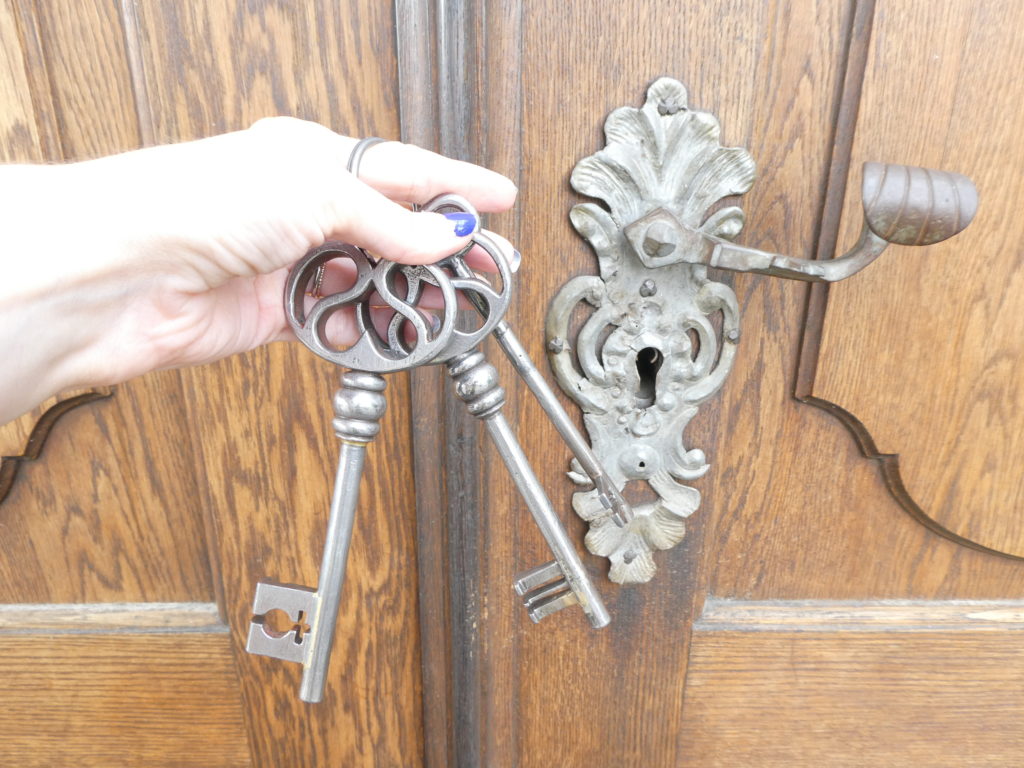 The cost per performance works out as something astronomical

The stage looks quite large, but is actually quite small as it has lots of layers of wooden scenes. It was built in the 1760s by the Schwarzenberg family. It was very expensive to build, especially when you consider that they only actually had ten seasons at the theatre before it fell out of favour. Each season only had a handful of performances for various dignitaries. They were big into illusions back then, as you can see for example in the illusion of the layers on the stage. 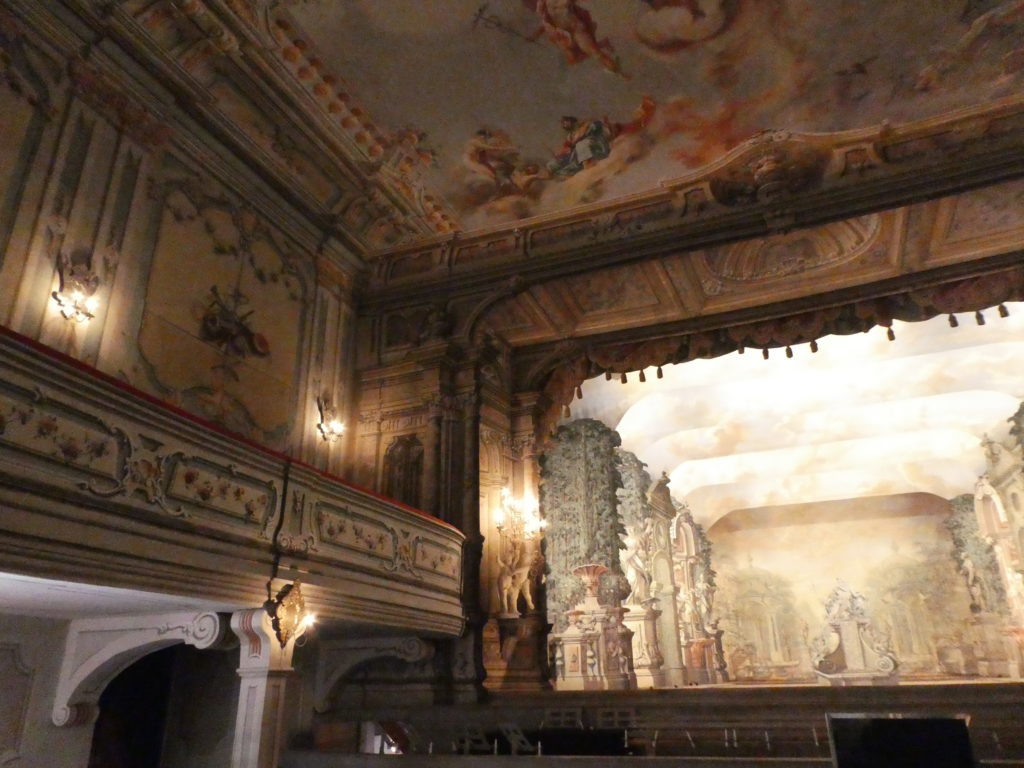 They even used fireworks, which was why most of these baroque theatres actually burned down. Hence why it is so unusual that this one has survived to this day. The scenes that you see on stage are the original scenes, and they have 600 costumes preserved from that time too. Everything is original – the building, orchestra pit, stage machinery, and the auditorium. Mainly, baroque operas were performed at the theatre, and there are still 1-3 performances each year nowadays. 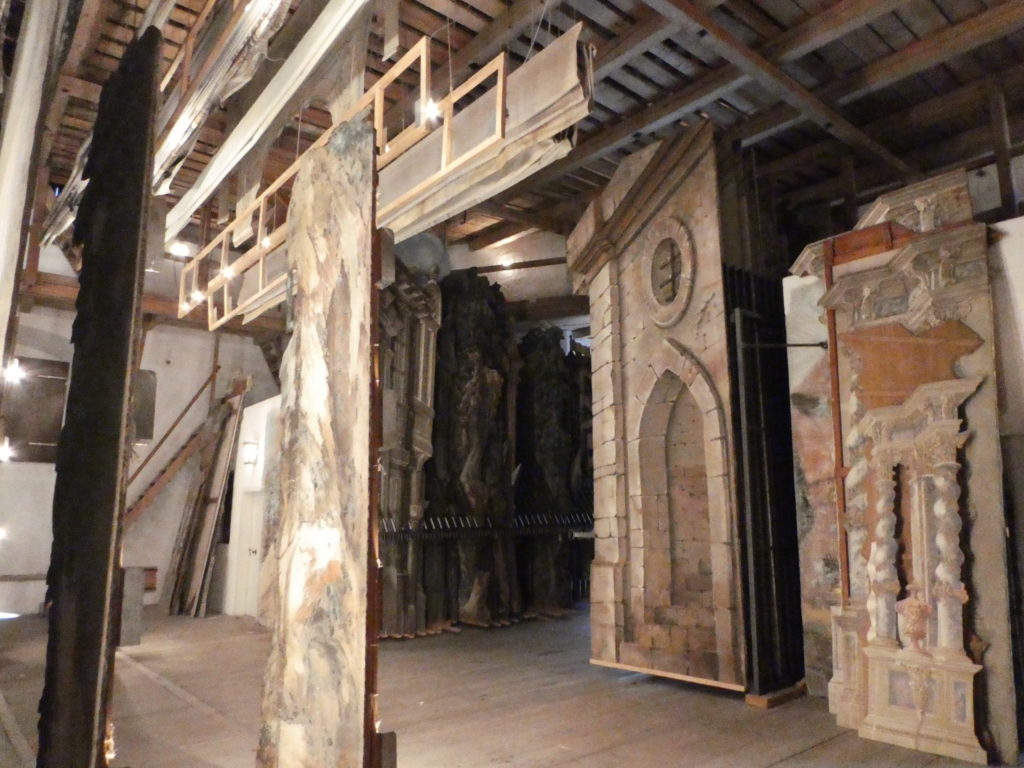 A lot of skill went into these baroque performances

The lighting all used to be done by candles alone. Each performance back then was done by 8-12 professionals, and a whole team of technicians backstage. They mainly played music by Italian and French composers, chamber music and things like that. We got to go to the side of the stage. Quite a treat! 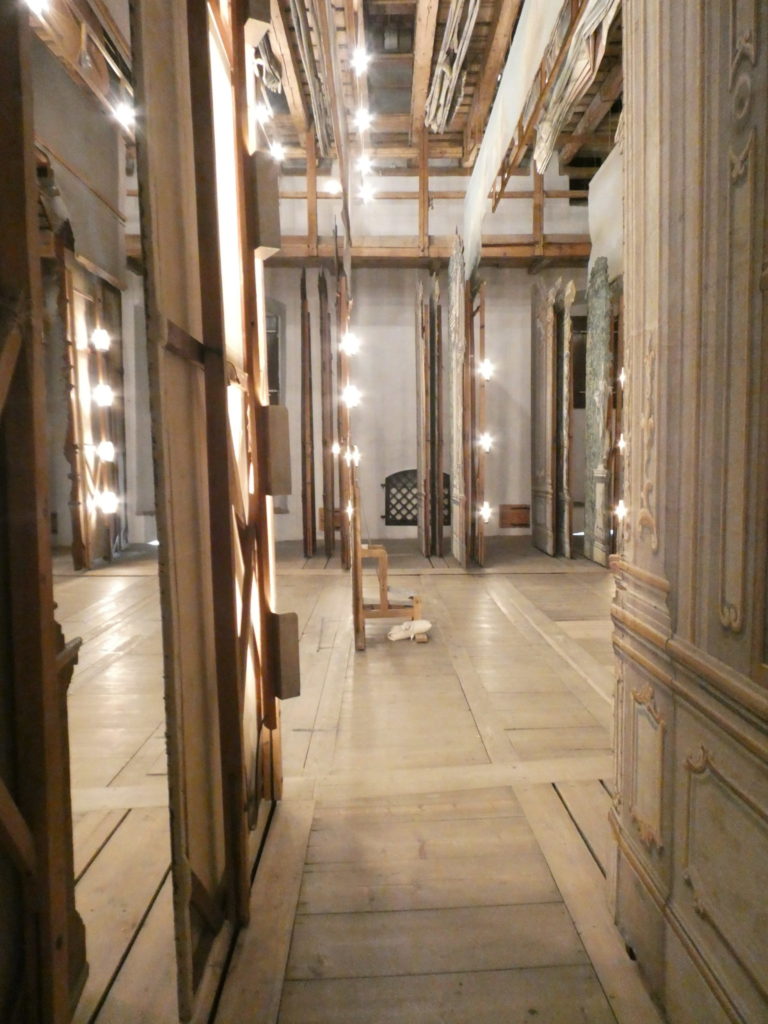 We were also allowed actually below the stage. Here, we could see the sides of all the scene changes and its slide system. One goes in and the other goes out. They could change the scene in just a matter of seconds. It was all done by a pulley system undeneath, like a big rolling pin with all rope around it. By hooking one piece up to another they could change them all at the same moment and synchronise it. It is amazing. 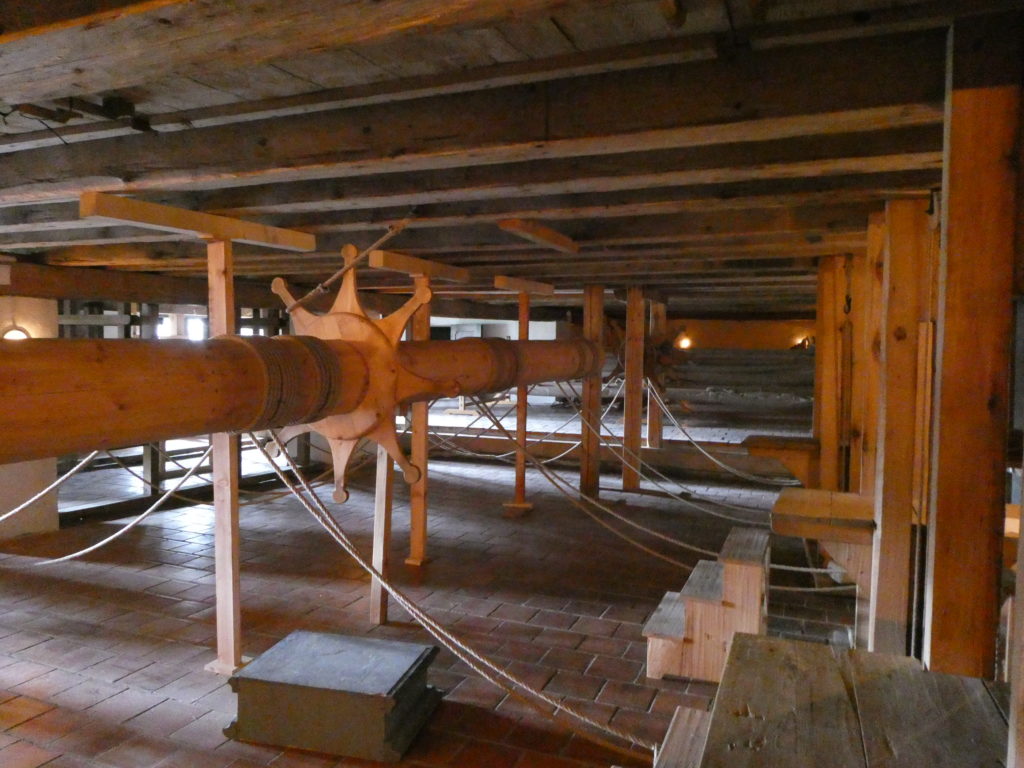 They also had a little box where a technician would have had to sit inside, and trapdoors where things came out of the stage. All the workings are very interesting, and we were shown lots of them before we left the baroque theatre. It is a totally extraordinary building.

A true wonder of the world

Another fantastic treat was getting to go in the Royal Box. There are just three chairs up there, and it is still used as a royal box today. The best view in the house! Without question, we’d recommend you try and include a visit to this precious theatre on your trip to Cesky Krumlov. It is one of the Czech Republic’s undoubted jewels, and indeed the world’s. 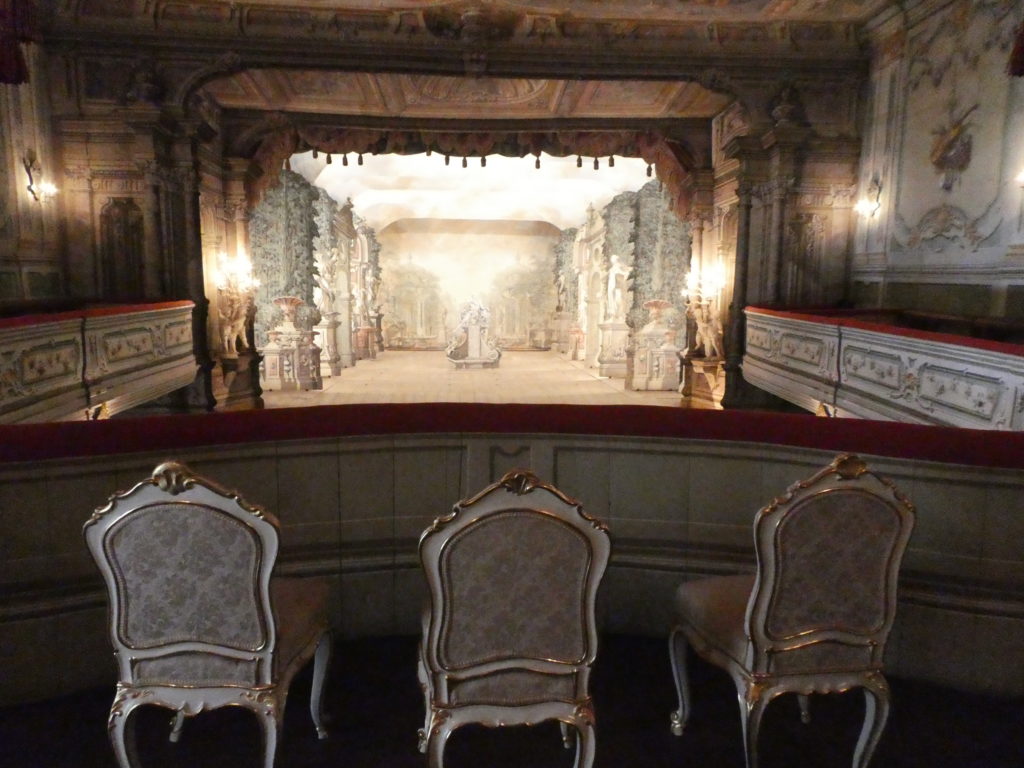 Have you had any rare experiences on your travels? Leave us a comment to let us know!