Zadar Walking Tour: See the Pearl of the Adriatic with a local guide

In Zadar’s People’s Square, you’ll often find a man with a white umbrella. Yes, even when its not raining! This will be Sime, the charismatic tour guide who runs Zadar Walking Tour. If you see him, and you will if you’re in the square at 10am, 12pm or 6pm, you’re in for a treat. Zadar is a city with a rich history, and a warm culture. To see it on your own is a pleasure. To see it with Sime is to see the real Zadar. 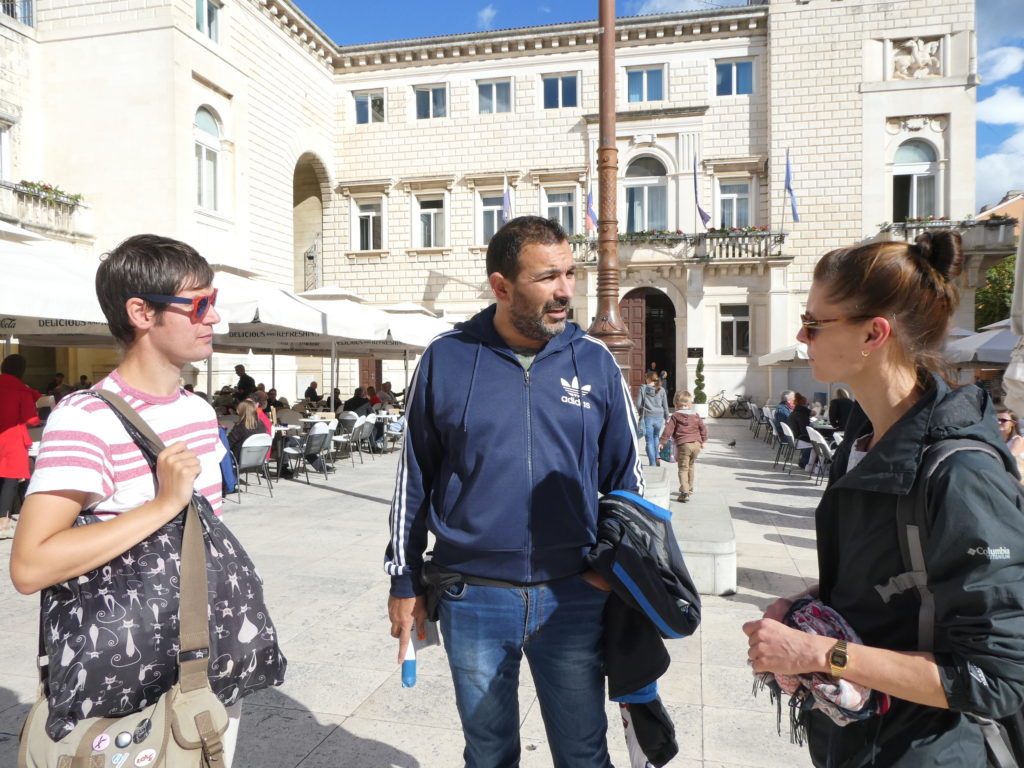 As if to show the community spirit of Zadar,  we had the amusing spectacle of Sime’s postman interrupting his introductory talk with a parcel for him, in the middle of People’s Square! Sime is a fantastic guy, full of information and a great way of story telling. He’ll start by showing you something you’d never guess was there if you weren’t on the tour. It is a church in the back of a cafe, here on the square! He told us some really interesting things about it, including how early Christians made the Roman columns ‘holy’ by carving crosses into them, still visible today. 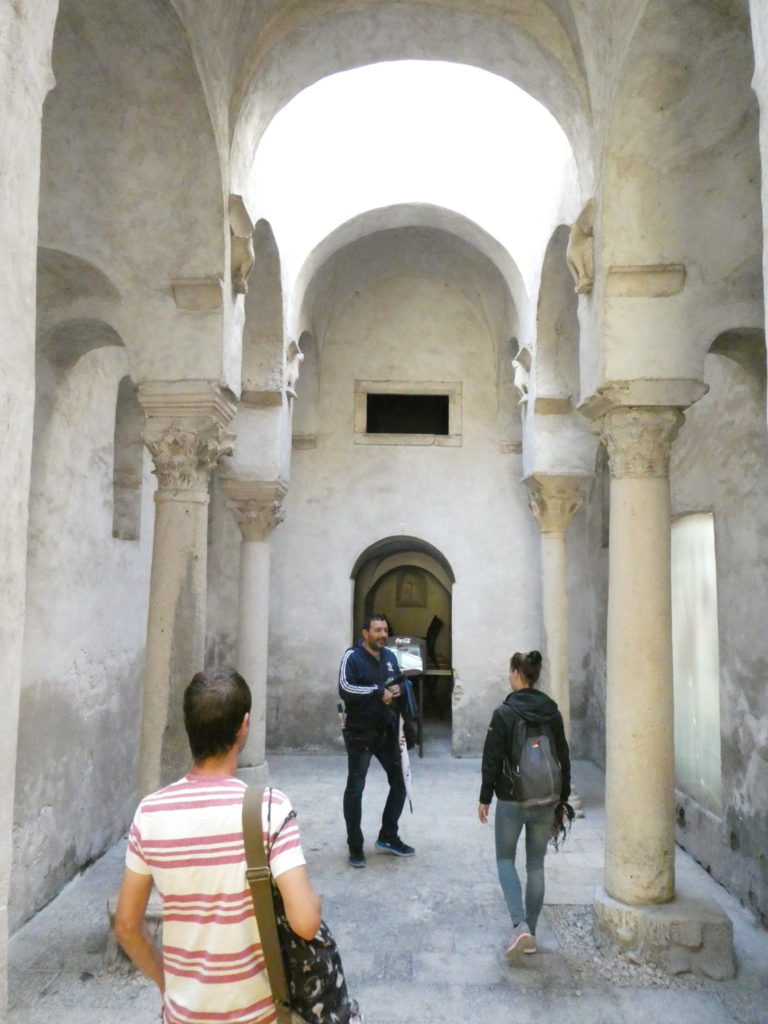 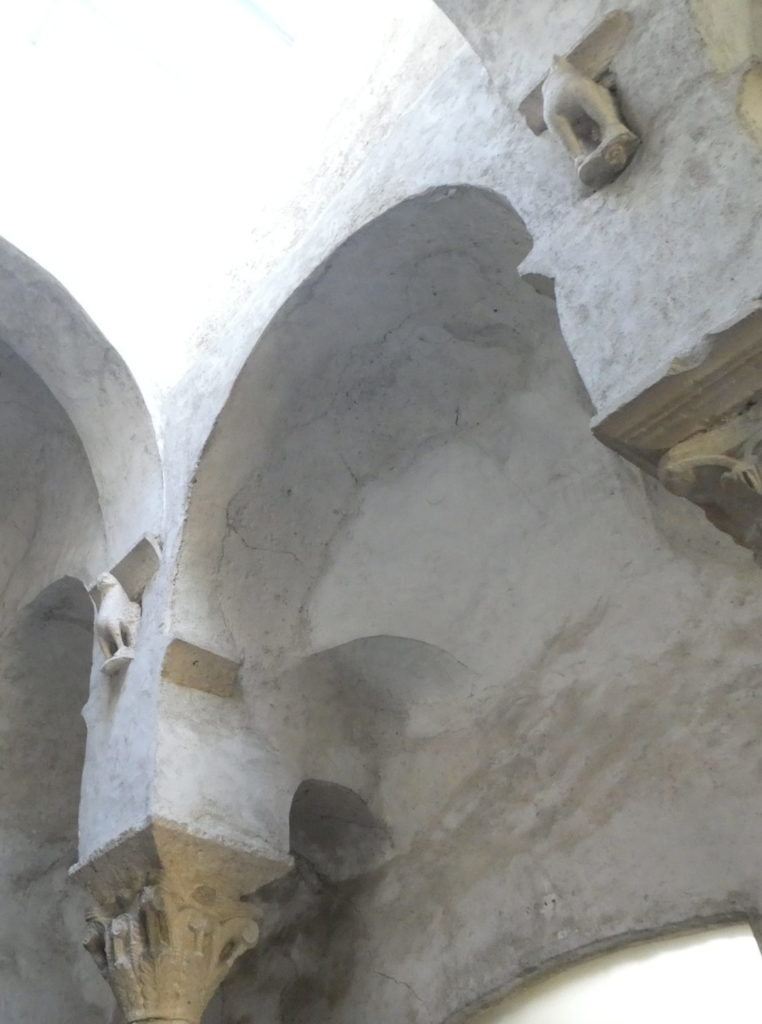 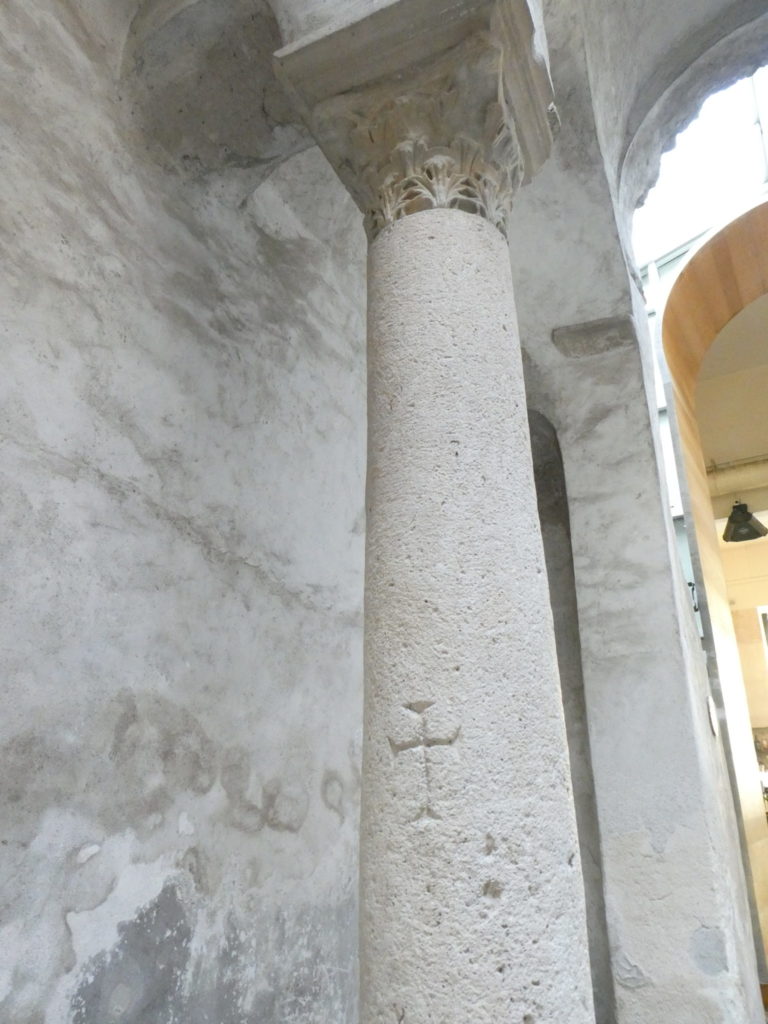 Even places we had seen before took on a new dimension

To our surprise, Sime took us into the Rector’s Palace for what was our third time, to see the exhibition of photographs showing the Homeland War in the area. Although we’d seen it before, it was so interesting hearing his take on the photos, having lived through the time. He can remember having parties underground whilst the war was going on above the ground. 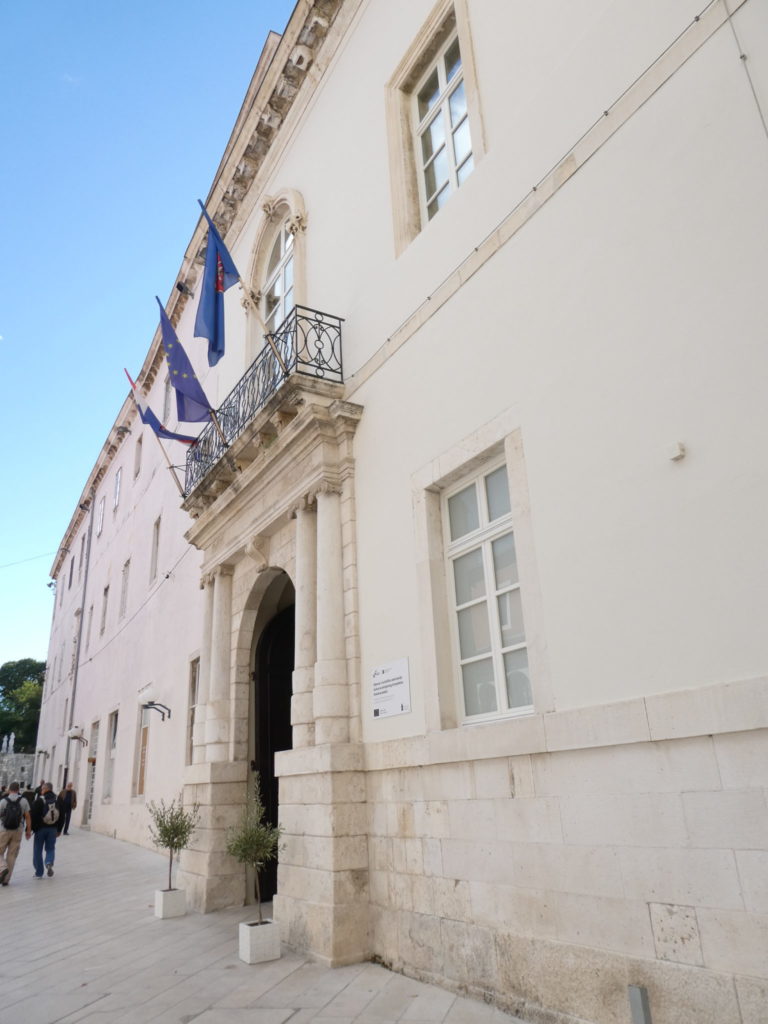 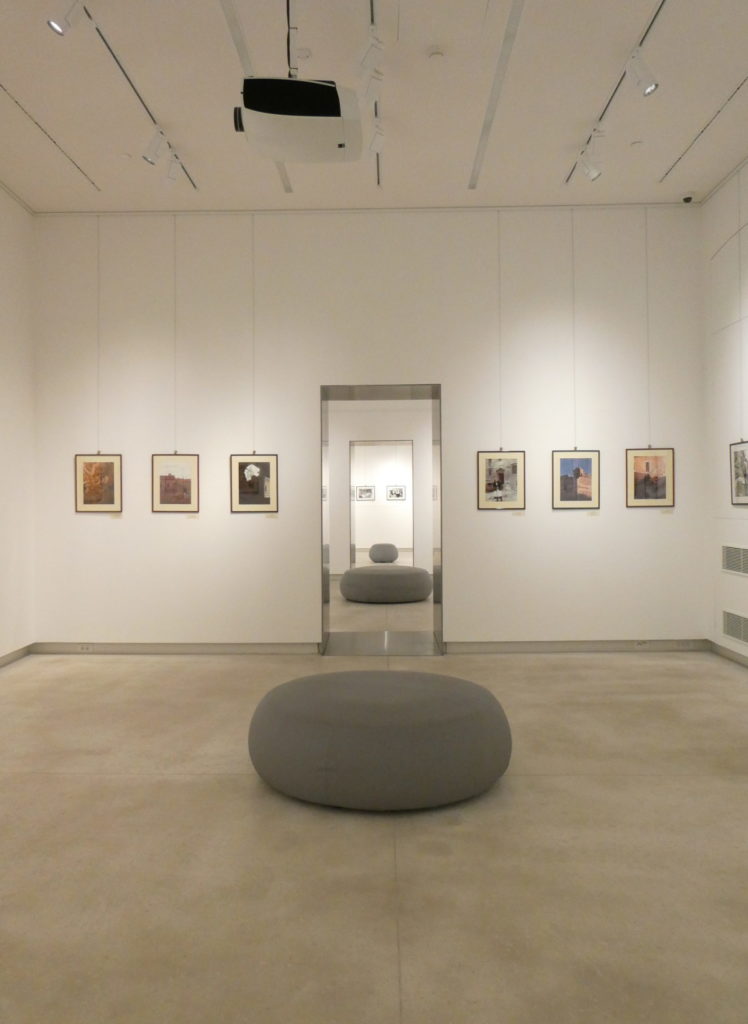 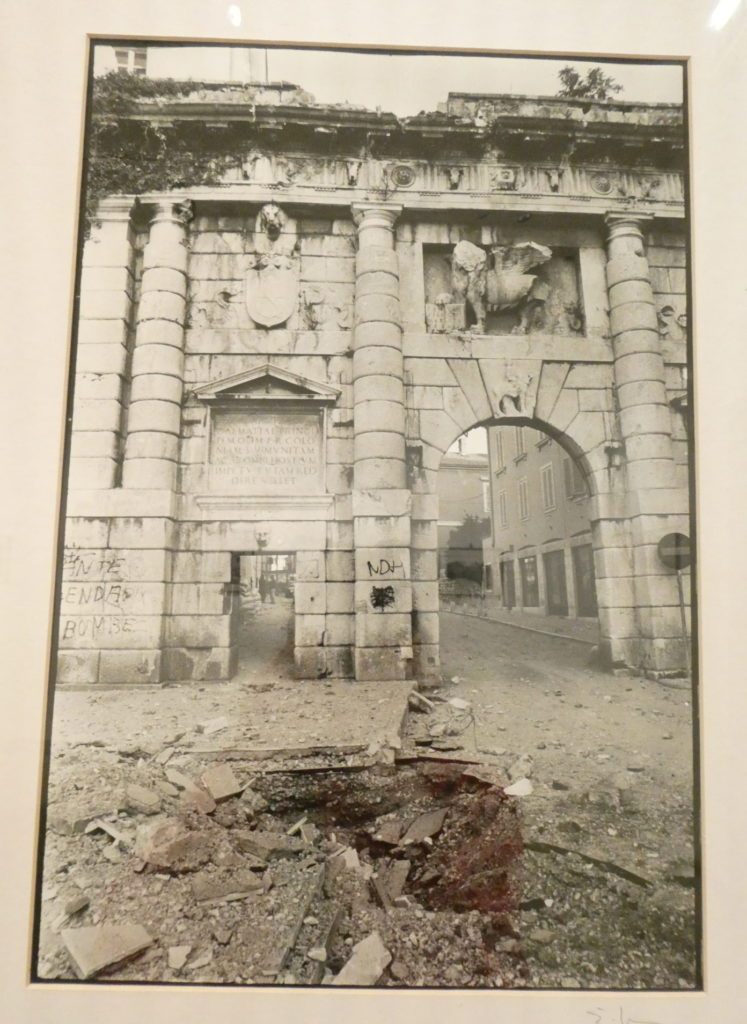 We came round to Petar Zoranica Square, where he pointed out the local cat, that is always there. Of course you’ll get to know all about the fascinating Roman ruins that sit around the square. He even took us back in the park for the great overhead view of the Land Gate, where he explained how it was renovated and being looked after since the war damage. Check out the photo above to see how it looked back then. 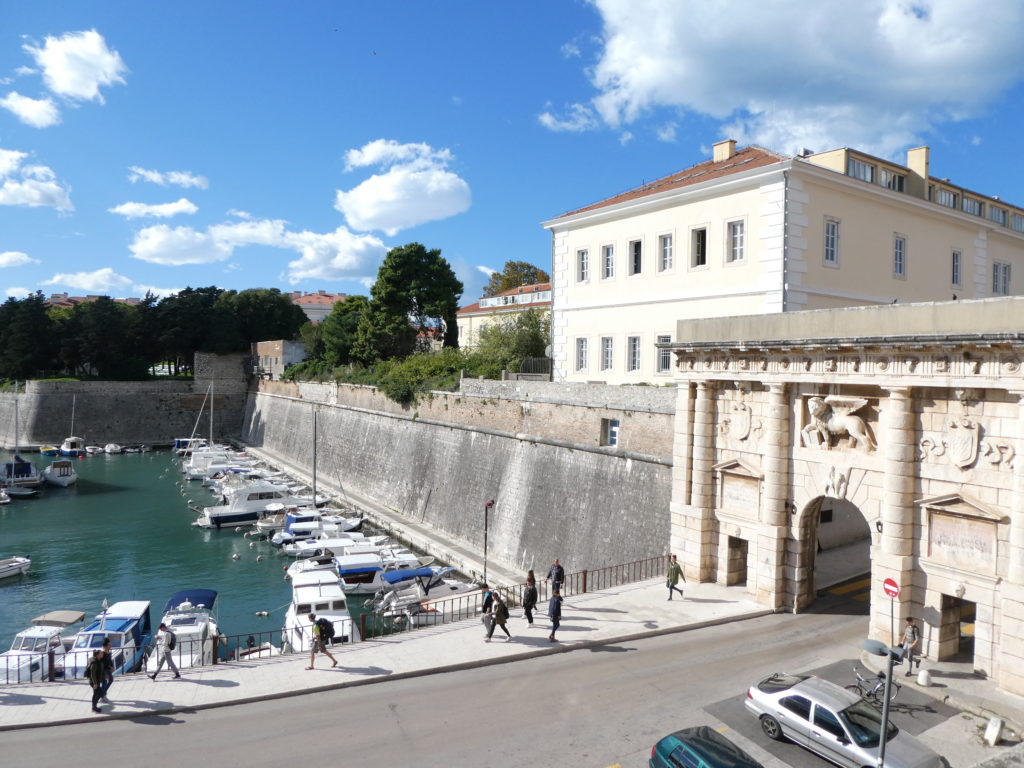 You’ll get a literal taste of the culture of Zadar

Sime is a very generous man, and offers his guests a few treats along the way. Firstly, he took us to the local fruit market to buy us all a mandarin orange, since he claimed that Zadar oranges were the best. They are indeed delicious. He then took us to the Gligora cheese shop, where they sell Pag cheese. Pag cheese is made on a nearby island called Pag, and is a hard sheep milk cheese that has a distinctive flavour. The final treat was a shot glass full of the local famous drink, maraschino liqueur. Even the Queen drinks it. The cherry flavoured liqueur is delicious. 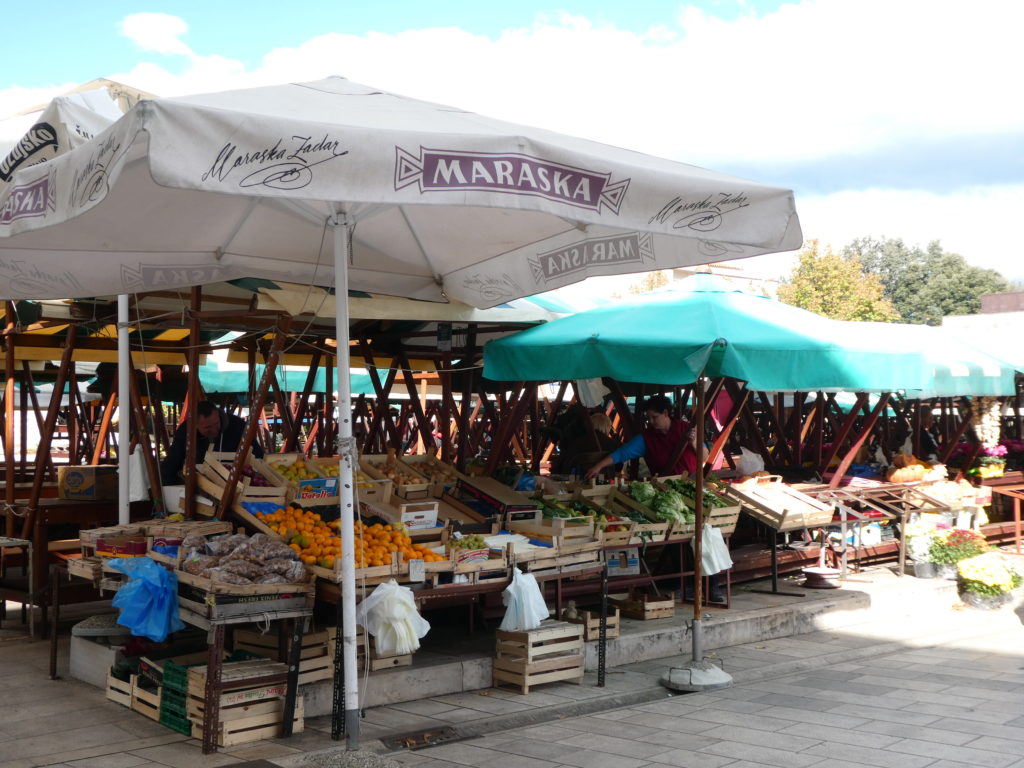 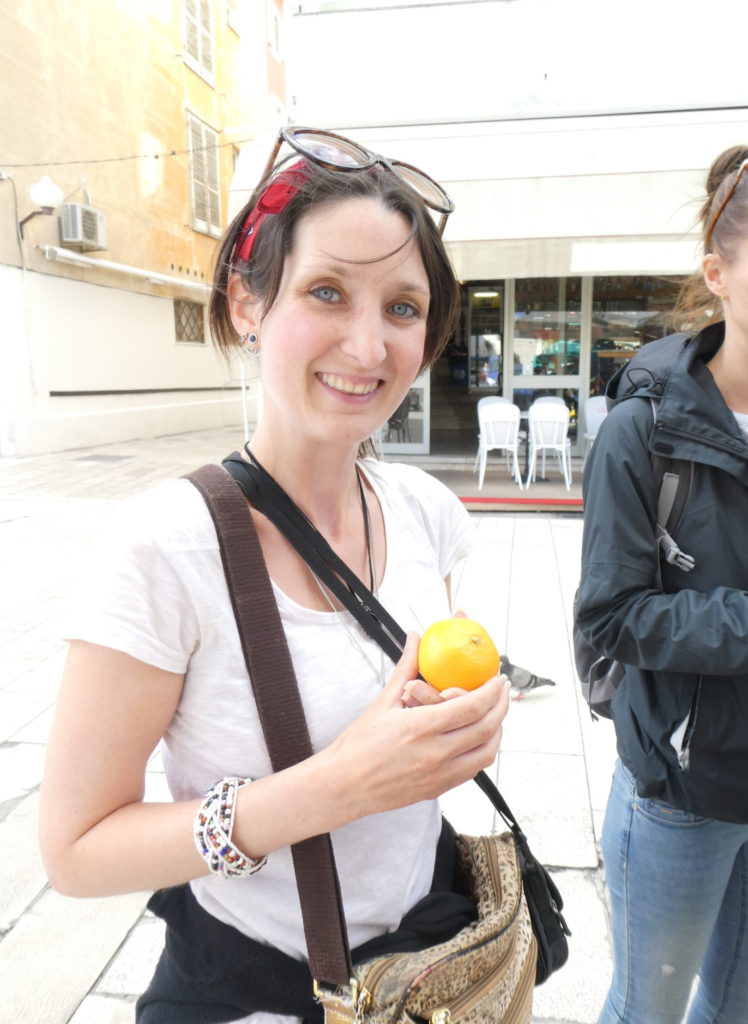 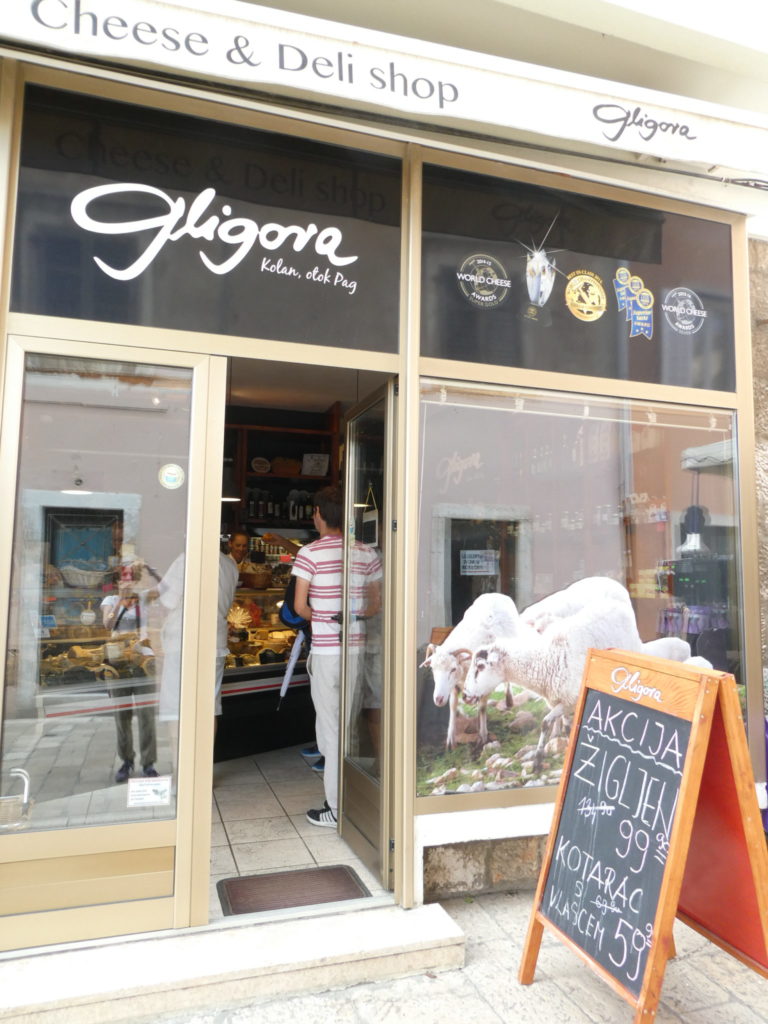 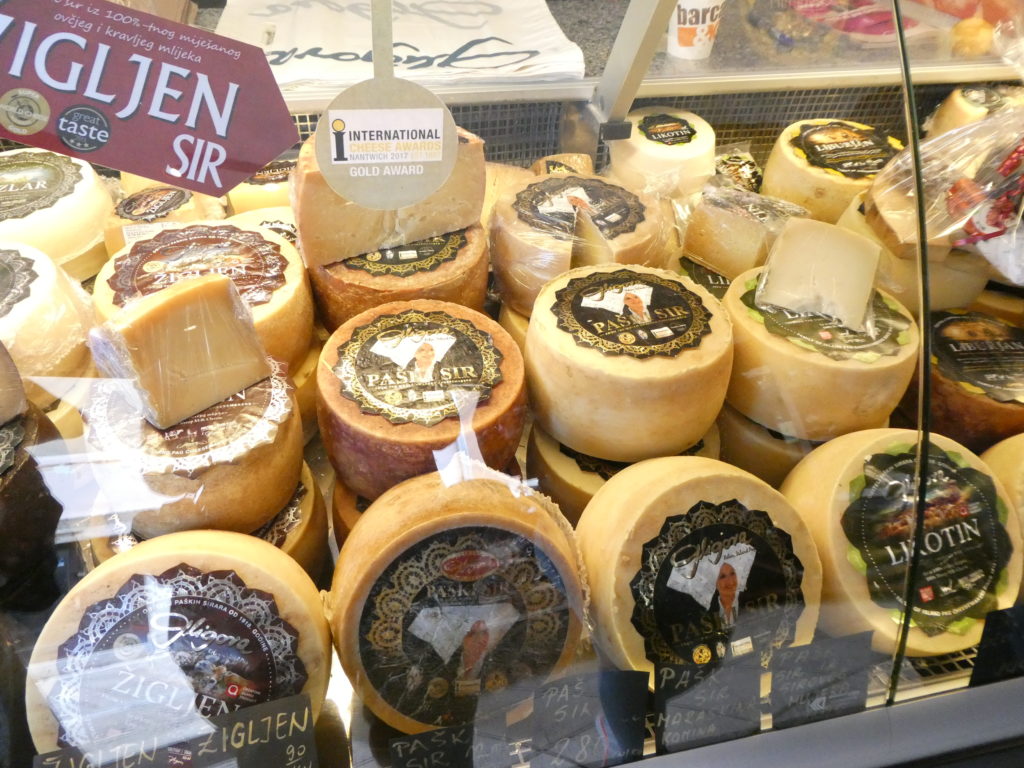 Another surprising find was a souvenir shop, housed in a former church building. It is an imposing space, with columns and arches, but best of all was the fact that much of the wall paintings survive to this day. Some of the colours are very vivid and medieval looking. As we passed some residential streets, Sime pointed out the bullet holes that covered much of the walls. Whilst Zadar has done a great job of renovation since the war, there are still countless signs if you look below the surface. 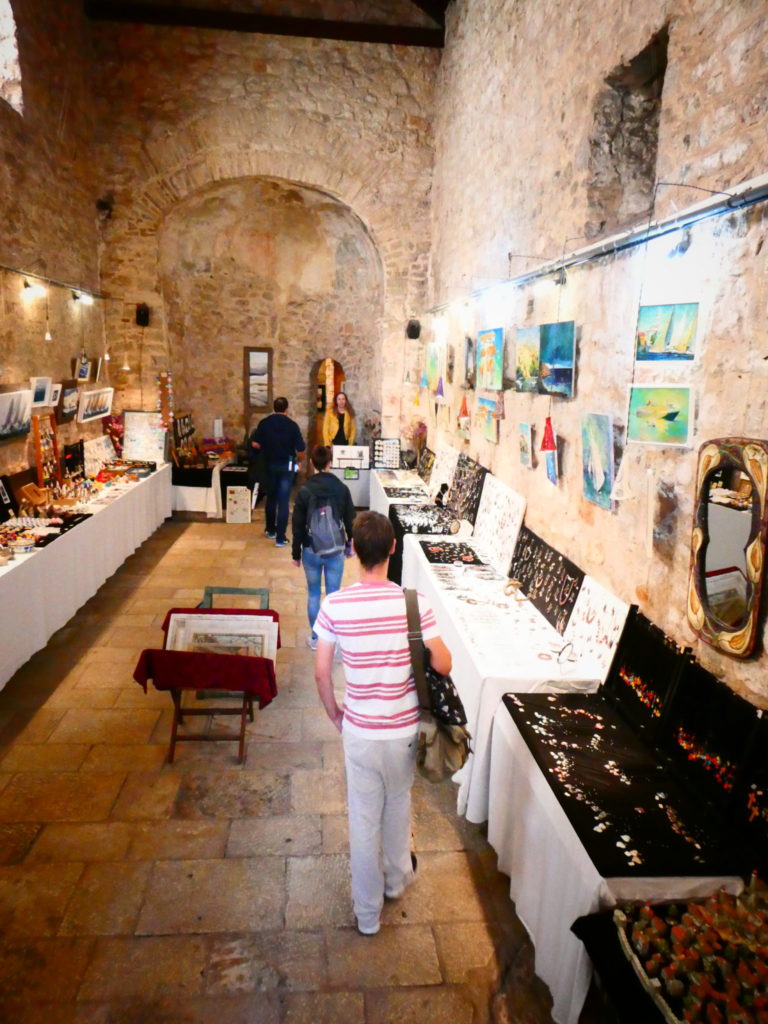 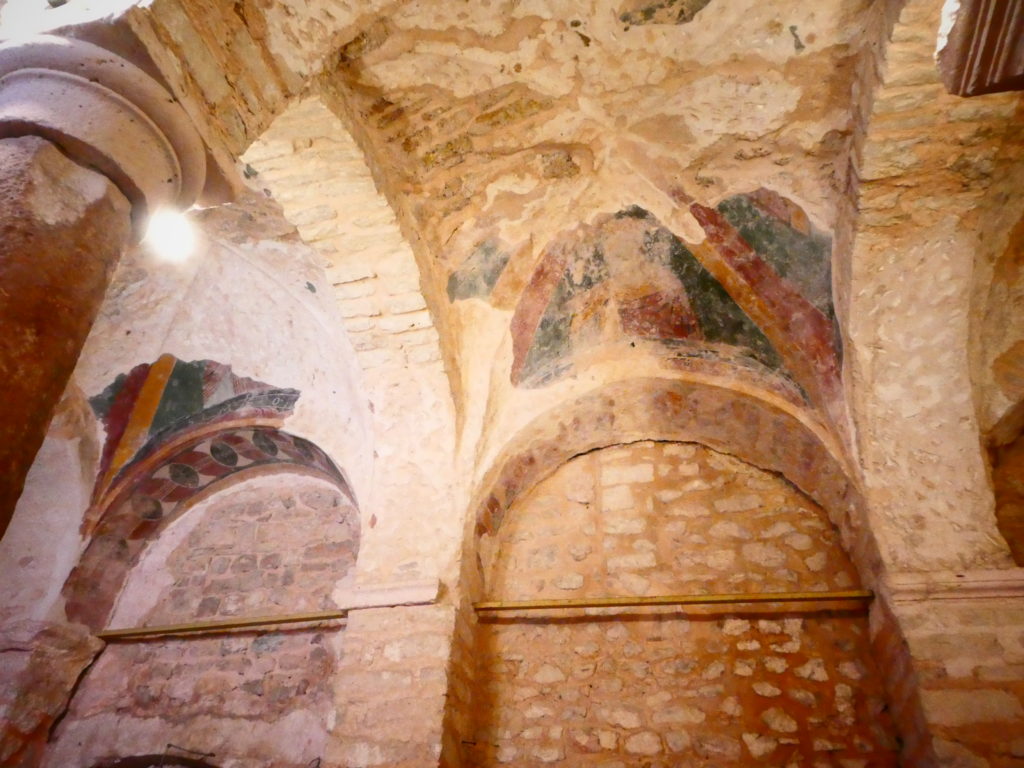 A refreshing counterbalance to an over-commercialised world

Taking the Zadar Walking Tour is a fantastic way to see Zadar, and feel its culture and history blend together. We ended up meeting Sime’s family, who were equally as kind-hearted and generous as him. In this world of large companies, even tour companies, it is a real treat to find a tour that is so on the pulse of the city that it wants to show you. Don’t hesitate if you see the man with the white umbrella on a sunny afternoon in Zadar! 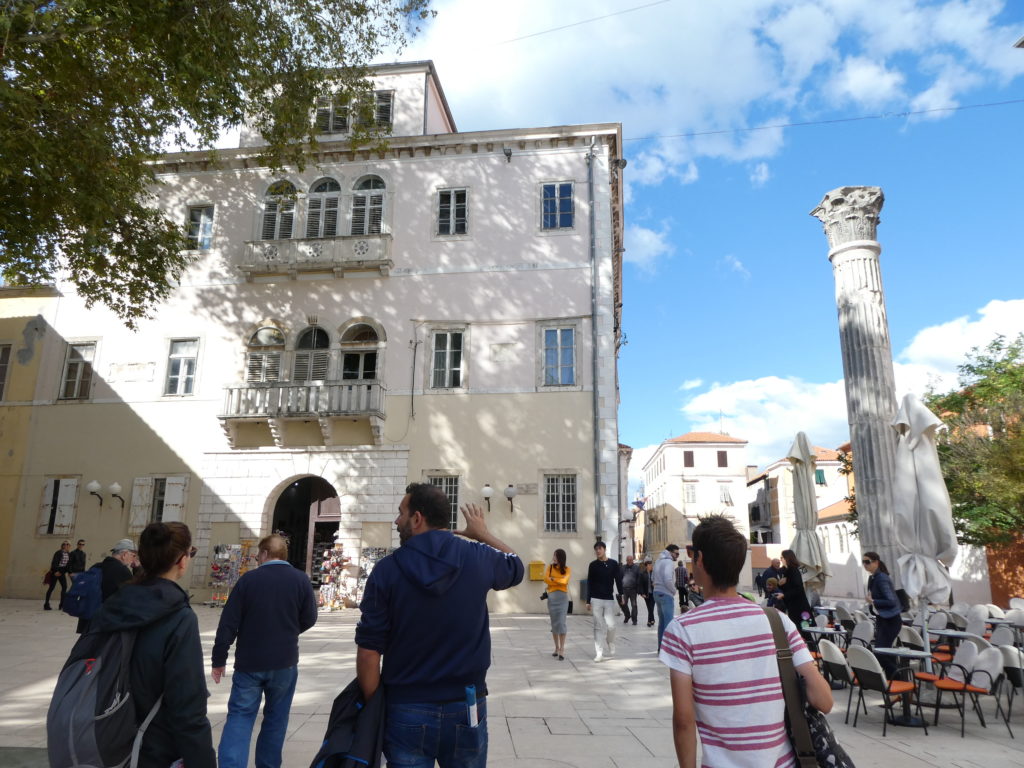 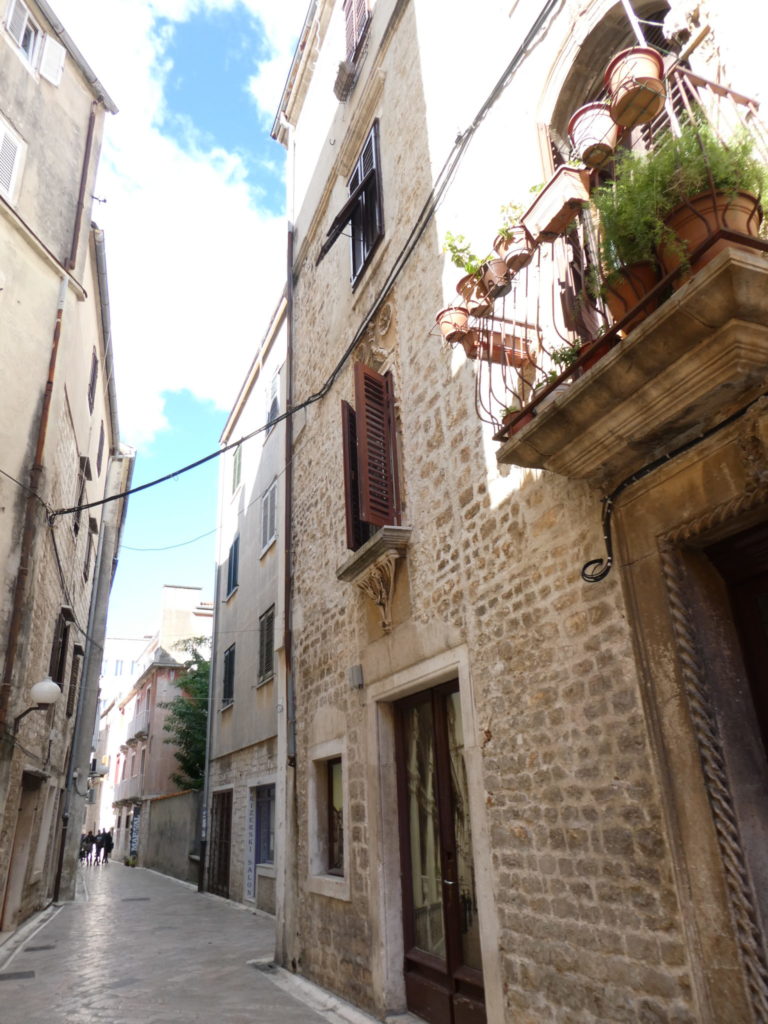 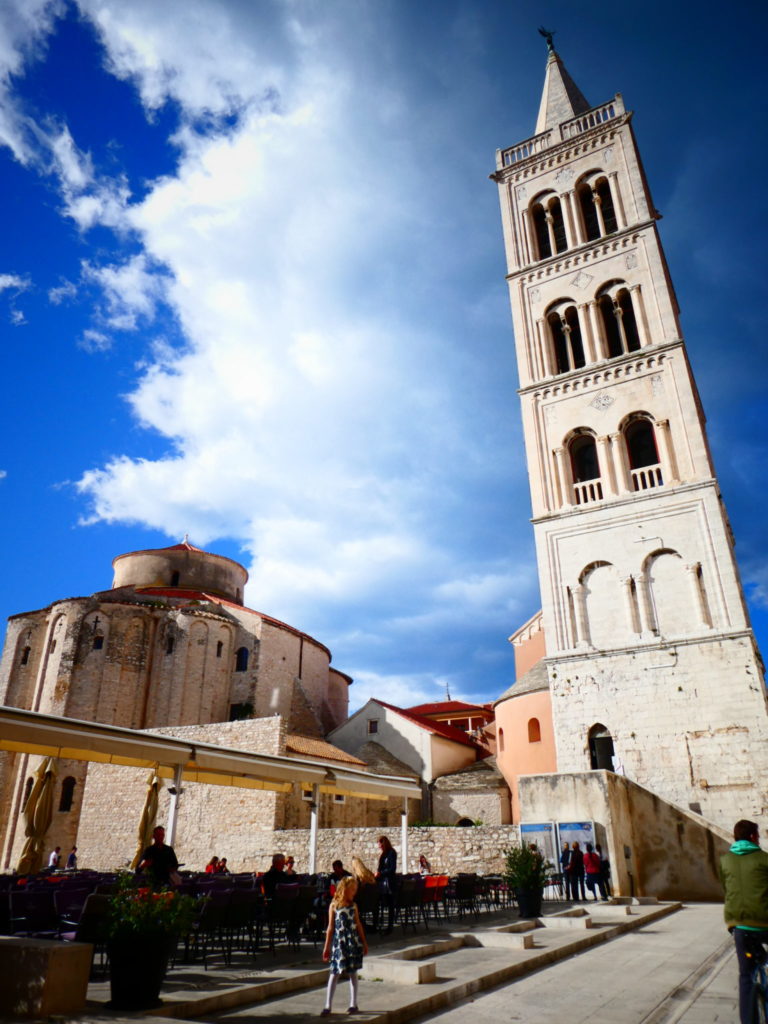 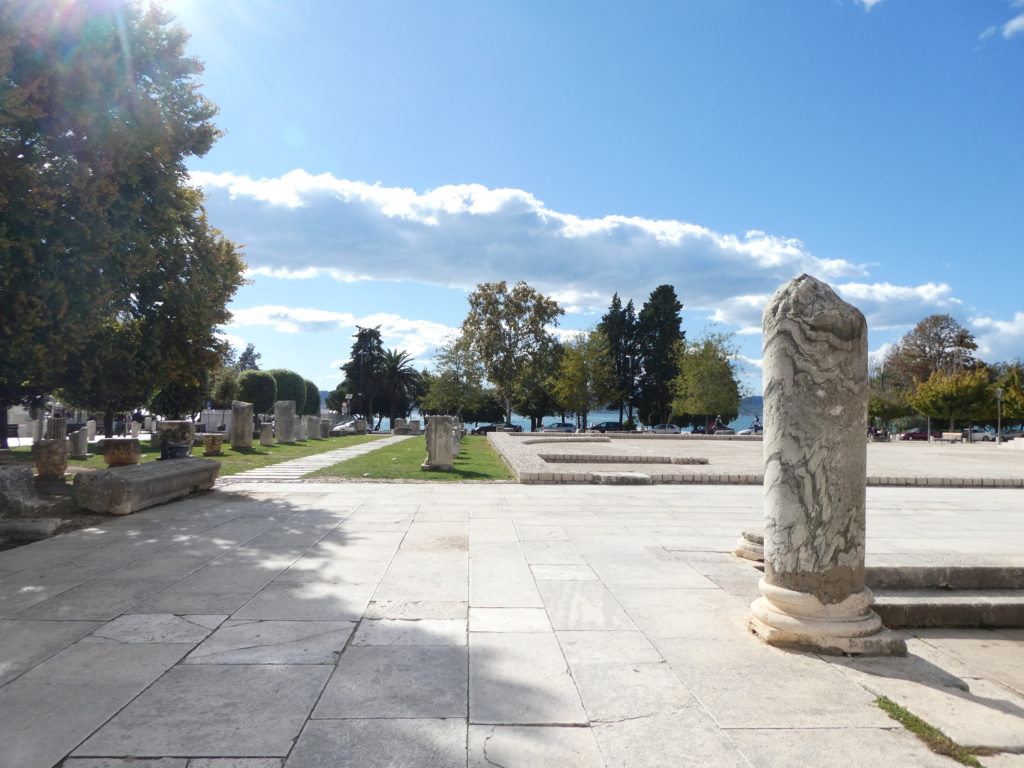 Have you done any memorable walking tours?