The legacy of the London 2012 Olympic Games

The Queen Elizabeth Olympic Park in Stratford, London, was built especially for the London 2012 Olympic Games. It is a place that holds extremely fond memories for us. This is because we were both performers in the spectacular Opening Ceremony of the Olympic Games. Unlike many host cities throughout the years, London always had a plan for the park. Five years later, the area is still thriving. The huge Westfield Stratford shopping centre continues to bring crowds in huge numbers. On top of this, the improved transport links make it an easy place to visit. 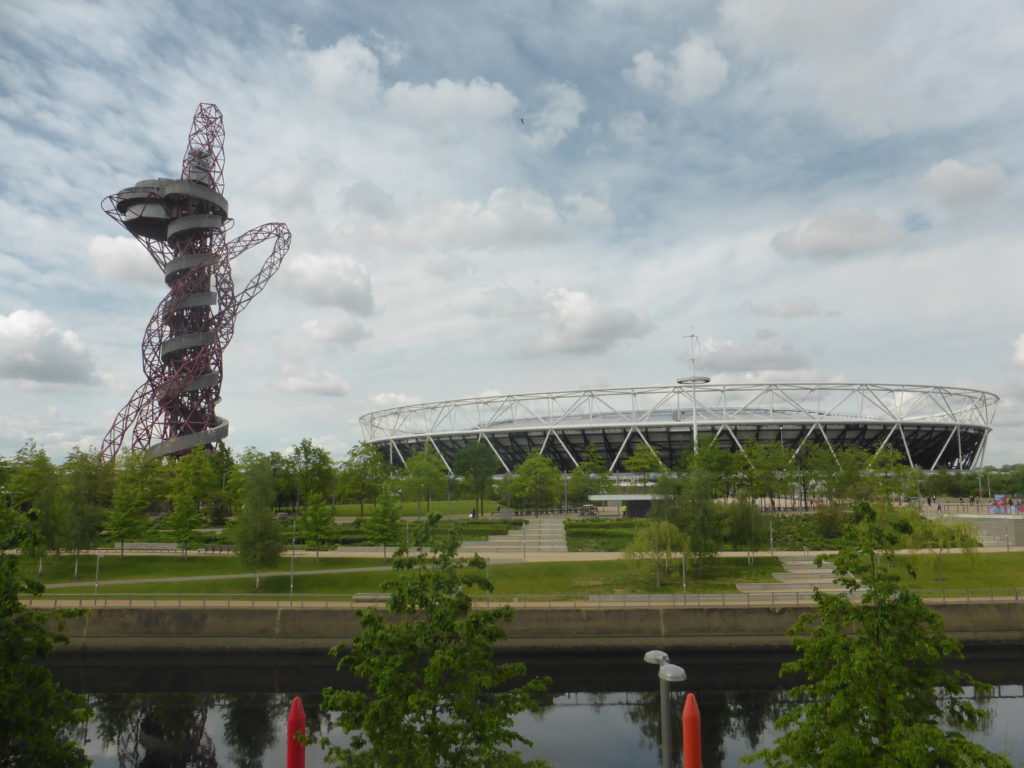 The iconic Orbit tower has adapted to provide a giant slide and abseiling, adding to its observation tower. West Ham United have moved into the Olympic Stadium, which is still used for world class athletics and big-name concerts. The Aquatics Centre is still host to huge swimming events, and offers leisure swims in the pool that Michael Phelps made history in. The VeloPark is a huge centre for cycling to this day. What’s more, the land that hosted so many people during the Games has become the largest urban park created in Western Europe for over 150 years. Wetland habitats, and native plants have been implemented to give it a whole new lease of life. 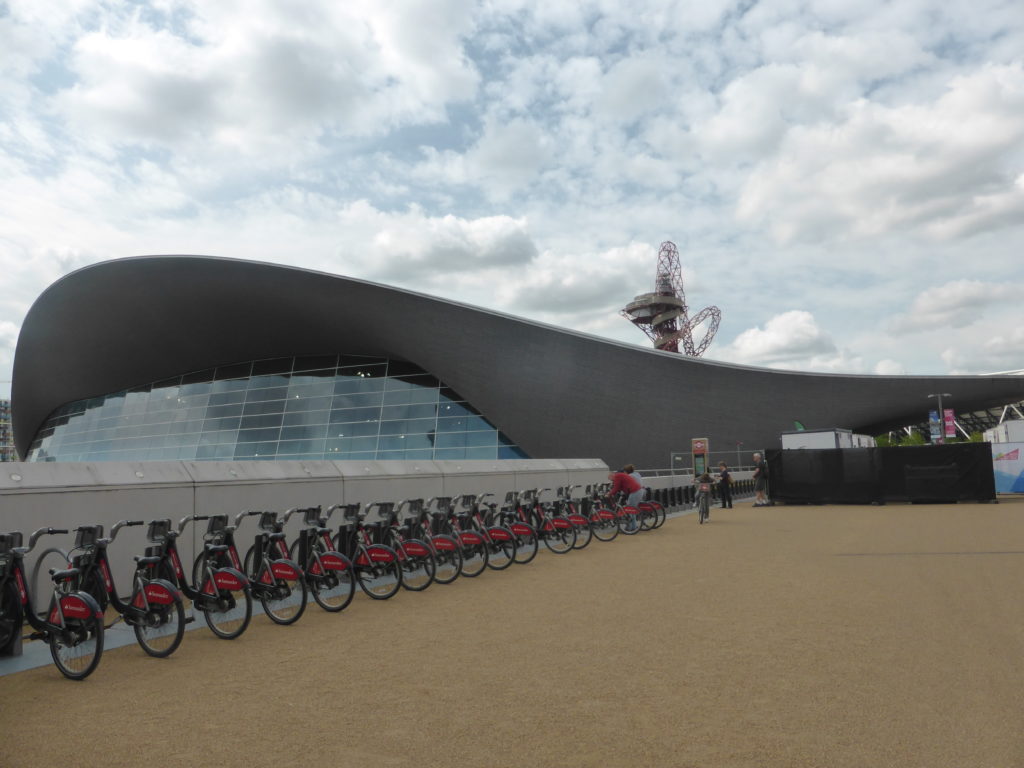 The information centre has great free trails to follow

Start your journey at the Queen Elizabeth Olympic Park information centre, where you can pick up some trail leaflets to follow. One is called the London 2012 Trail, and we definitely recommend doing this. It is supposed to take an hour, but please do leave yourself extra time to see the sights and explore. The best trail, however, comes in a large and free book, and is called Art In The Park. This is a trail of the artworks that have been created for the park. This one will take two hours or more. It starts with the trees with metal rings around them that you may recall from the Olympics. A walk down to the canal brings you to the crayola crayon like steles that boats can use to moor up on. 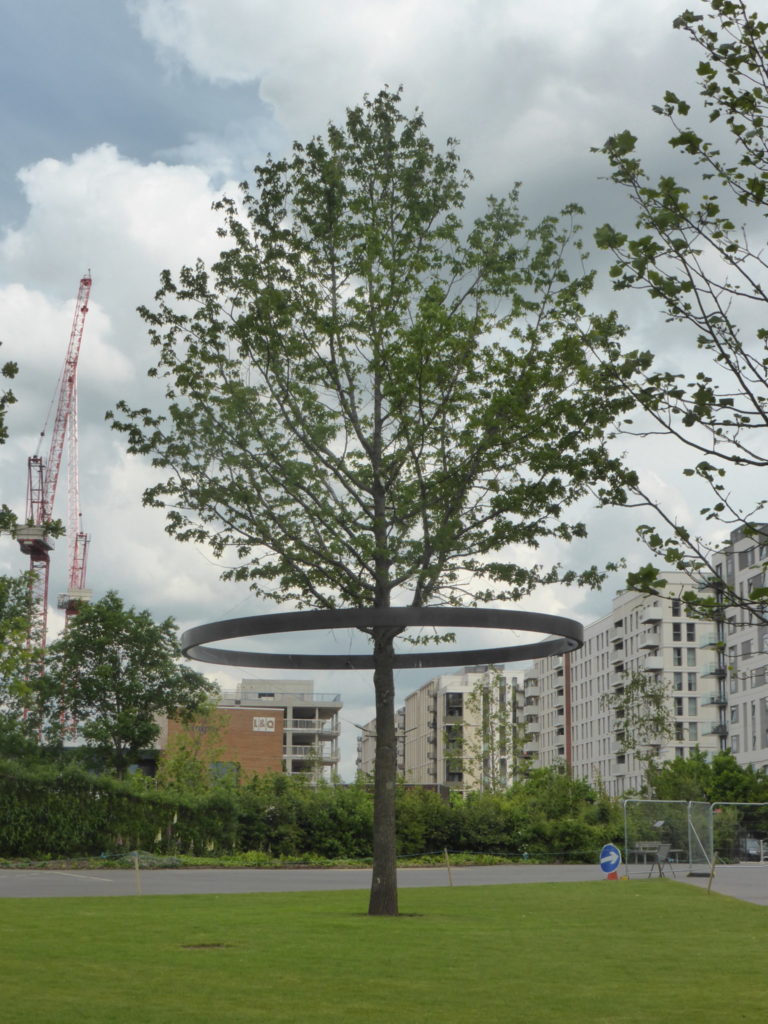 Continuing around the back of the Aquatics Centre takes you to a poem cut out of wood, and a large mural created from tiles on the wall of a power station. Another features some metal with punched out holes creating the illusion of hand-drawn lines. Walking past the Orbit, with its ultra-cool slide, you’ll see a pixel wall. It is made from coloured pieces of wood that can be turned around by anyone to create whatever you see fit. Many people have written on the cubes. Back down to the canal side, you see a few of the fifty benches that have random facts on them. One states the fact that the person you love is made up of mostly water! 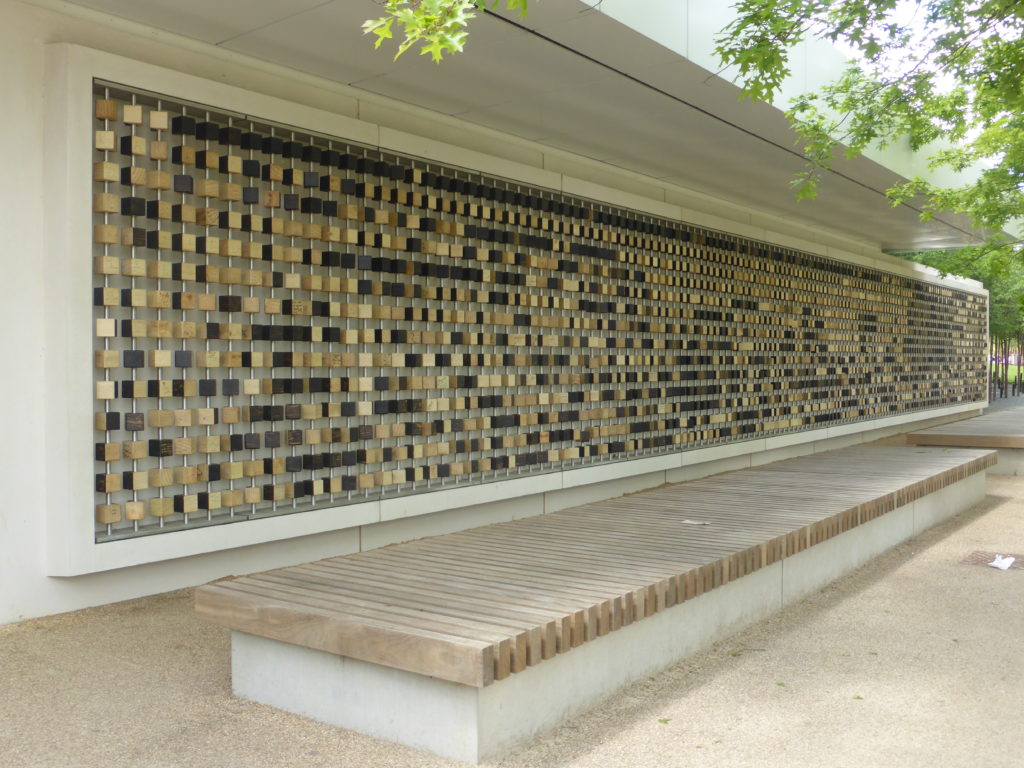 The Olympic Rings are still here!

A wall with little metal things coming out of it supposedly represents the fingerprints of the people that helped create it. The poppies are still here, and look great! Past the Stadium, be sure to stop briefly at Mandeville Place. Apples are now apparently grown here. Head onwards to the Copper Box Arena, with its iconic Run sculpture outside. When we visited, some guys were playing ping pong either side of the ‘U’! It is nice to see they still have the large Olympic and Paralympic logos up that we enjoyed getting photos with during the Games. 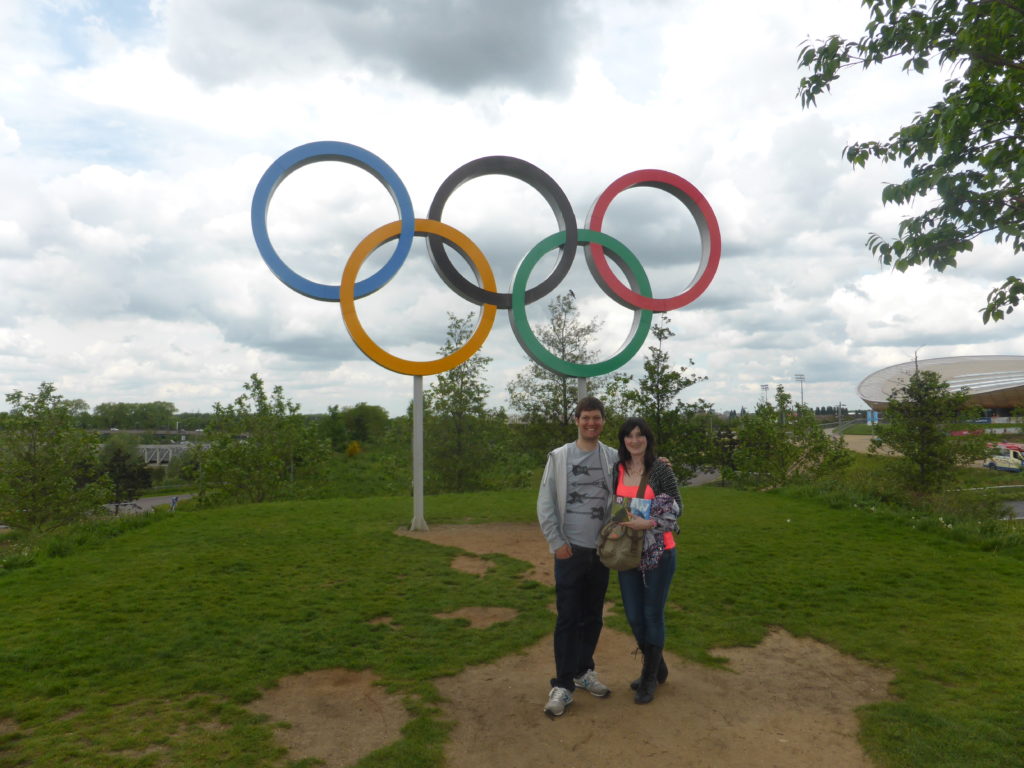 Crossing a bridge over a busy new road, with its spiral imagery on the floor, you come to a really cool play area. You’ll find a weird tree thing, rope bridge, and even a swing hanging from the rope bridge! There are a couple of artworks that are supposed to be places to hide or explore. However, they don’t really seem to offer much in that regard. Climbing a hill near the Velodrome brings you to a small camera obscura. You surely have to be ten feet tall to see through it though! After posing with the Olympic rings, check out a piece of art on a security fence called LFO Spectrum. It supposedly changes appearance throughout the day with the light. Nearby is a poem about Eton Manor, our changing area for the Opening Ceremony. 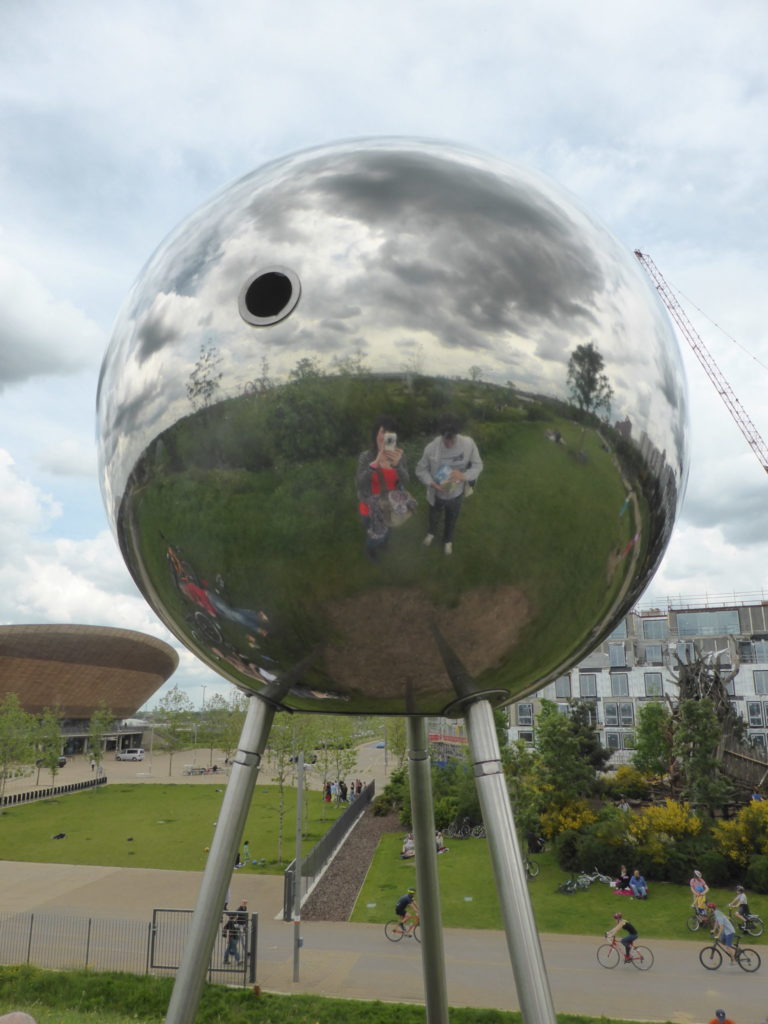 A romantic day out in East London

A psychedelic underpass leads back to the main road, where you can see the last couple of pieces. Firstly, words from Ulysses written on some stones outside a school. Then, a mirror labyrinth in the centre of a small park area. We hope you get to visit the Queen Elizabeth Olympic Park – a fantastic place for a date in any weather. Especially so when it is sunny! Whether or not you have fond memories of London 2012, the park has plenty to do for all couples. Check out some other romantic things to do in East London here. 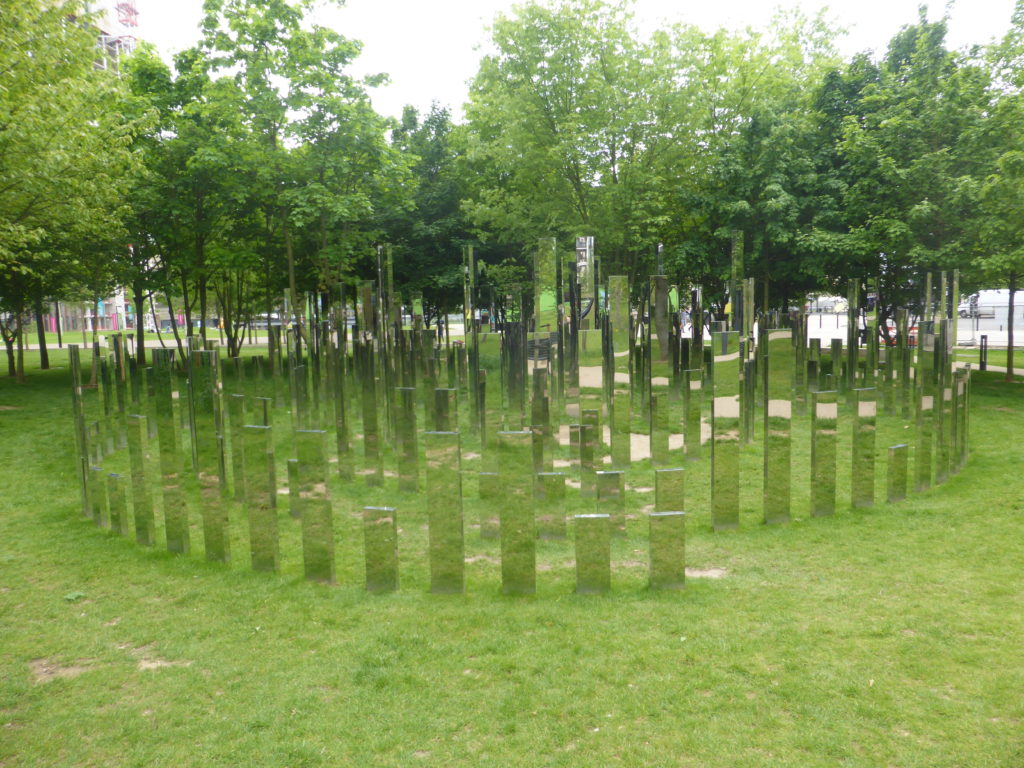 Have you been to the Queen Elizabeth Olympic Park? Maybe you came to the Olympics and wondered what became of it?