Being outdoors and at one with nature is always a romantic way to spend time with your partner. Horseback riding is a simple date idea that requires little in the way of planning. Just find a local company that offers horseback riding treks, trail rides, or even lessons, and book in. They will normally provide everything that you need. Being on horseback is a romantic image in itself. It is easy to think of the damsel in distress, being rescued by her Knight in shining armour on horseback. 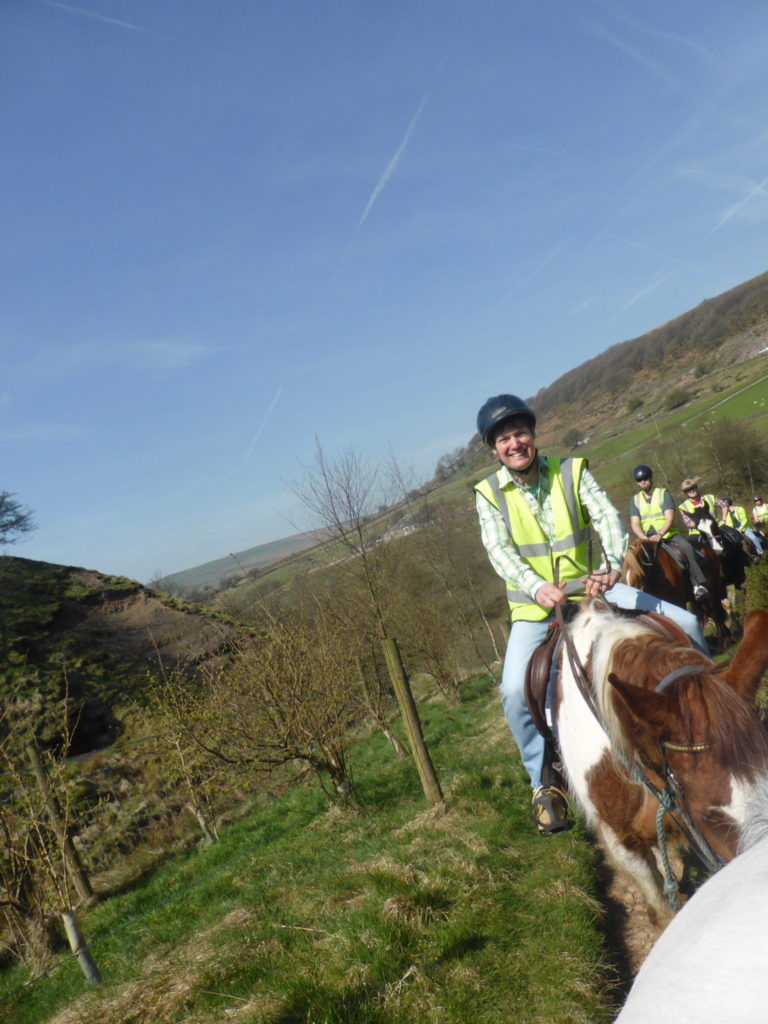 Most trail rides take in stunning scenery too, like the one we just did in England’s Peak District. If you can, find a company with a relaxed cancellation policy, since wet weather will seriously dampen your enthusiasm. Be sure to wear layers, so that you can cope with changes in temperature. Don’t worry if you have never ridden a horse before, since more or less all trekking companies will cater to complete novices. It is a great way to spend some time together. 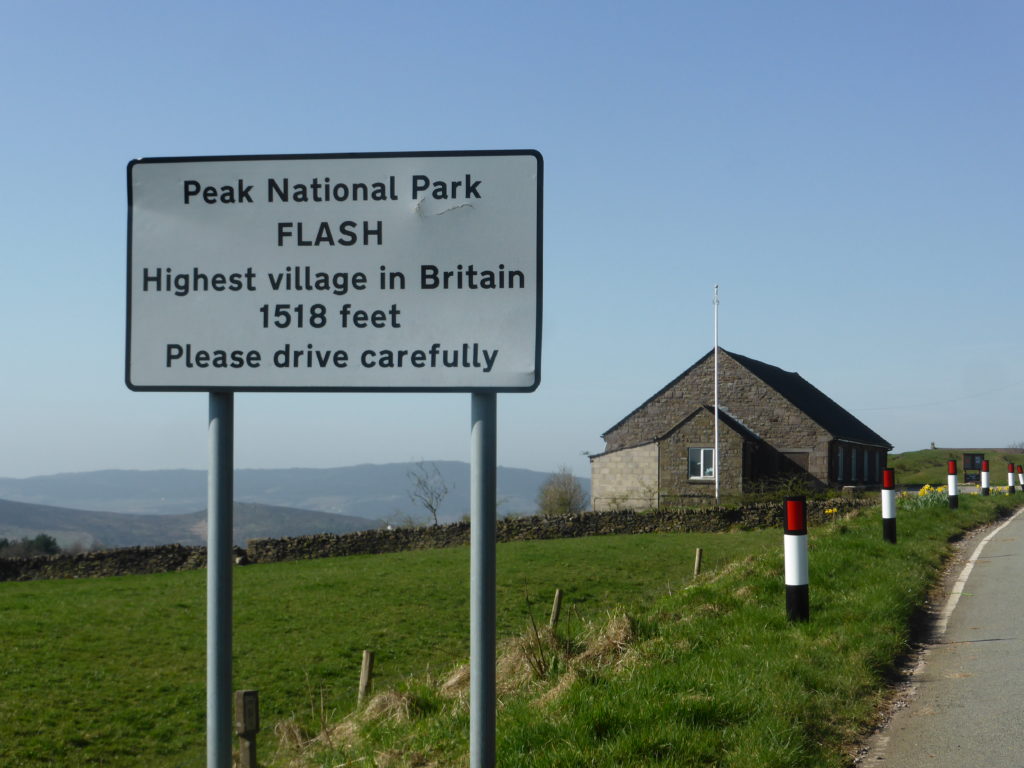 We headed to the village of Flash for our most recent secret date, Horseback Riding. Flash is the highest village in Britain, at 1518 feet above sea level. They proudly boast this fact on their welcome signs. The village church, St. Paul’s, contains a very old graveyard with graves dating back to the 18th century. We even saw a gravestone for John Wain! Also in the village is one of the first Wesleyan chapels (Wesley was the founder of Methodism), and the highest house in the UK, called Far View Cottage. 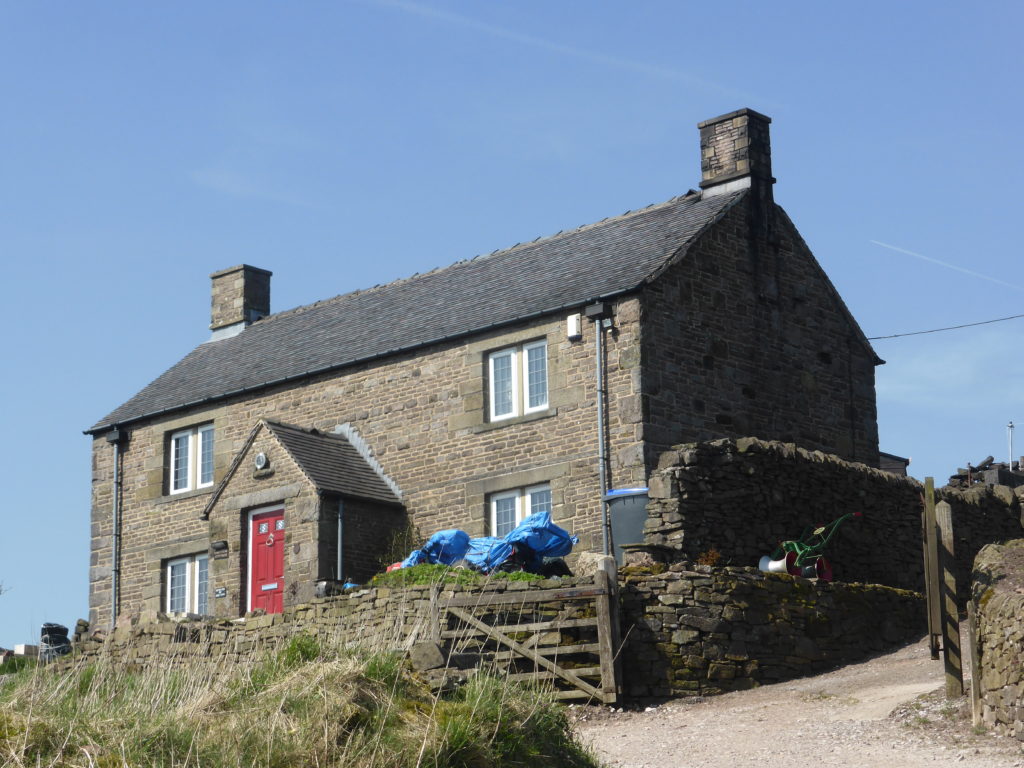 Next to Far View Cottage is a public footpath leading to a very daft gate. It was daft as there was a gap next to it that was wide enough to pass through! As well as stunning Peak District views, there is an abundance of old, beat-up cars up here, which is odd. The highest village pub in Britain, The New Inn, was closed. We were intrigued though, by its sign that looks like a cross between Jesus and a Highwayman. Flash was once a den of iniquity, famous for counterfeit money and cockfighting. Nowadays, it appears to be a much sleepier place. 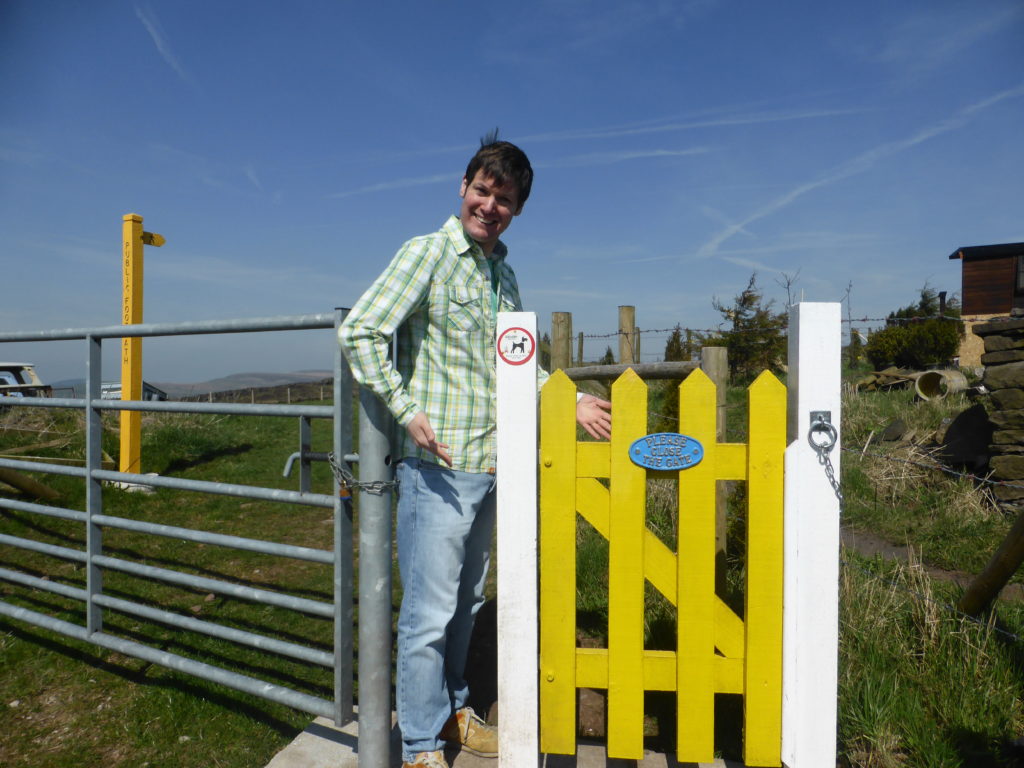 We had booked on to a two-hour trail ride from Northfield Farm, which cost £50 each. This is a much longer ride than we have had previously. However, at only £14 more than a one-hour ride, it seems daft not to. It was a beautiful day for it, really warm and sunny. There were four of us on the ride, as well as two more experienced riders. It was a confusing start with no-one really giving any clear guidance as to where to go, but we eventually got kitted out. We had to wear a riding hat and a hi-vis jacket. Amy got a pink one though, so she felt a bit more girly. 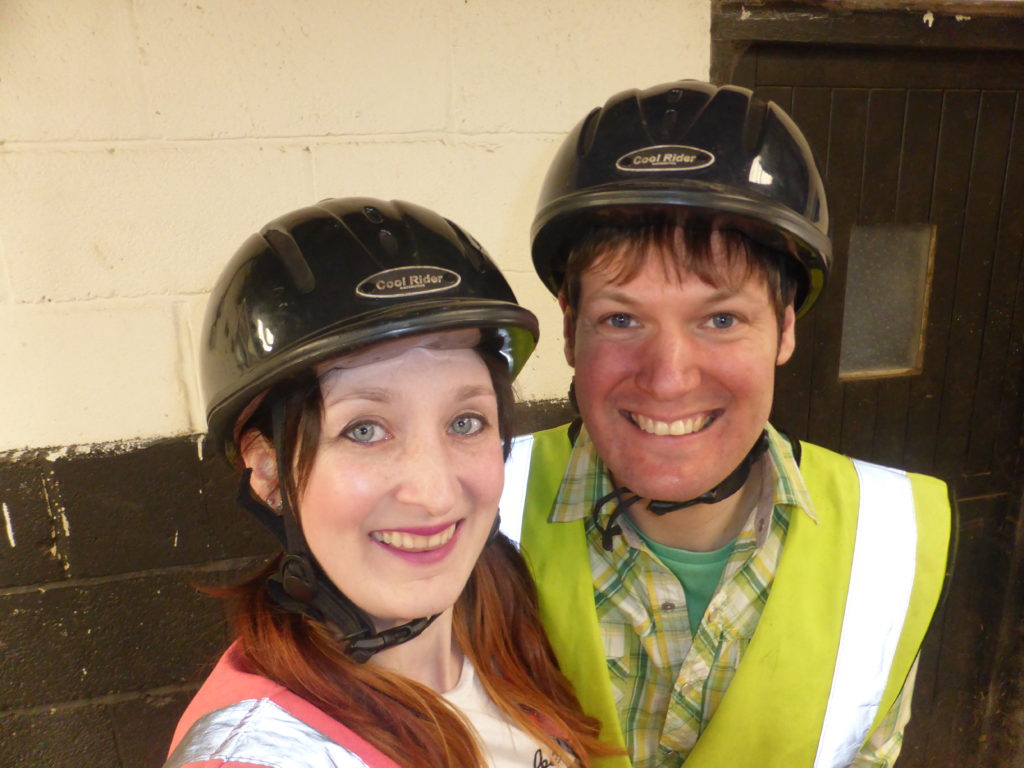 We noticed that the terms and conditions banned cameras or mobile phones to be taken. We asked if we could attach our camera to our jeans belt. They agreed under the condition that we take responsibility for any injuries. I had it first, as I struggle to get the tie correct when on the move! My horse Bonnie was relatively big, though still one of the smallest out today. She seemed keen to take me over to the trough, but when she was there, she didn’t drink. She just stood staring at the wall. Amy then mounted her horse, Jimmy. She was a bit worried that her horse was a bit of a trouble maker, as he was the only one who got tied up after being mounted! 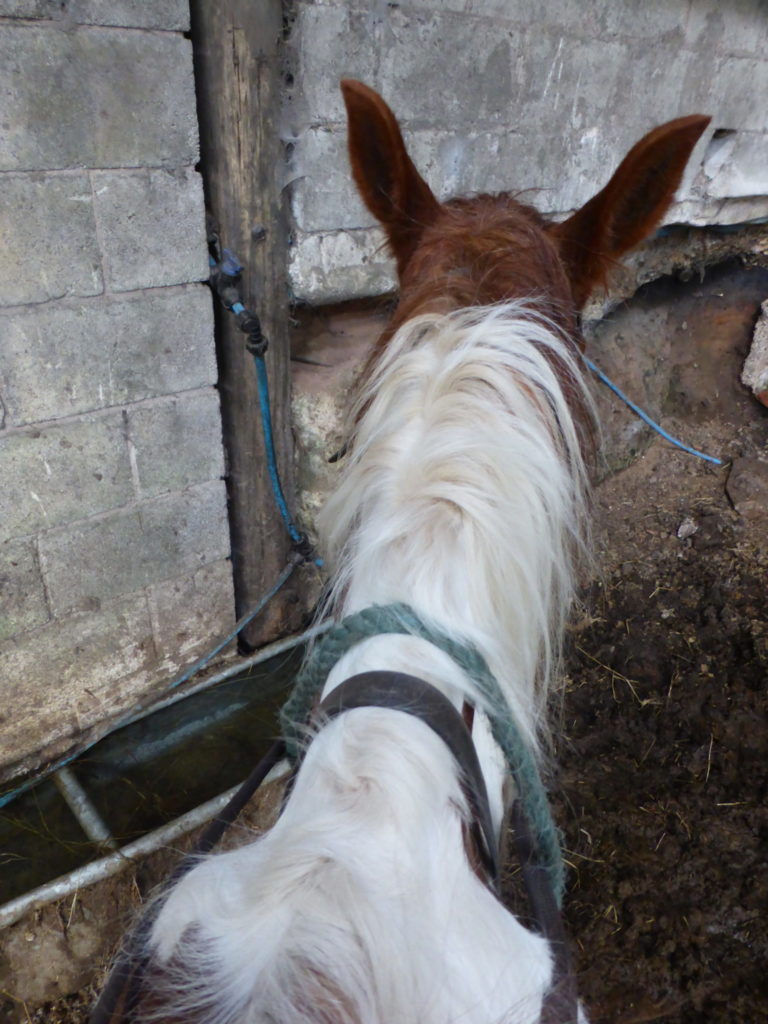 Riding a horse on a busy main road?

Unfortunately, for the first half of our two hour ride, we hardly saw each other. This was due to us being taken in different groups on a lead, by two separate guides. They did this as the first part of the ride takes you actually onto the A53. This is a very dangerous though scenic main road, famous for speedy cars. Our horses were kept on the grass at the side of the road, but the staff had to ride on the road itself. Soon enough, we were heading onto a country lane towards Knotbury, where cars, cyclists, and even a bunch of lads riding dirt bikes had to wait for us to pass. 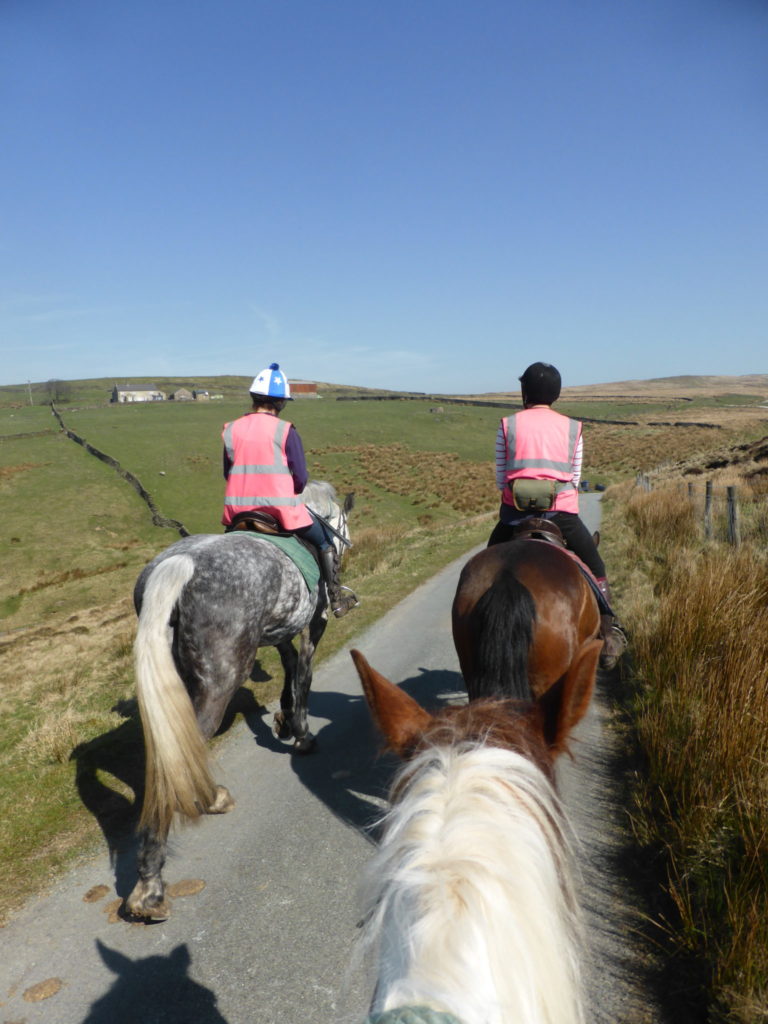 Despite Amy being nowhere to be seen, I had the camera so had to take some pictures as best as I could. It wasn’t easy to do with it being attached to my jeans belt and so bright that I couldn’t see the screen! Not to mention the fact that I was riding a horse as well! Although we were disappointed that we couldn’t see much of each other, the scenery was breathtaking! We were heading through paths carved between two grassy hills, with pretty brooks on the side. Our leader got us all trotting for a while, which was great fun. 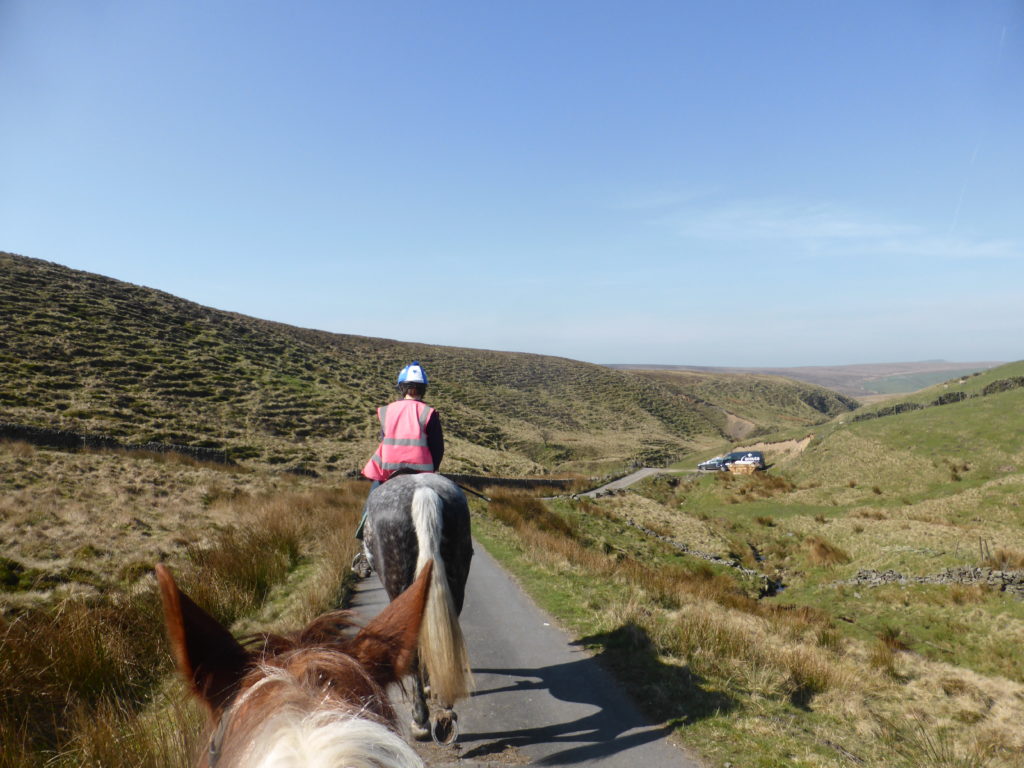 We stopped briefly to open a gate, and finally got close enough to talk to each other, which was great. Amy even took the lead for a while, as our horses clambered down a very rocky outcrop. This resulted in us leaning backwards to keep balance and holding on for dear life! For most of the ride, we were told to steer the horses with the reins. However, we were advised to just let them find their own way down here! There were pretty steep drops to the side as well, so it is a good job that Bonnie, Jimmy, and the others knew what they were doing! 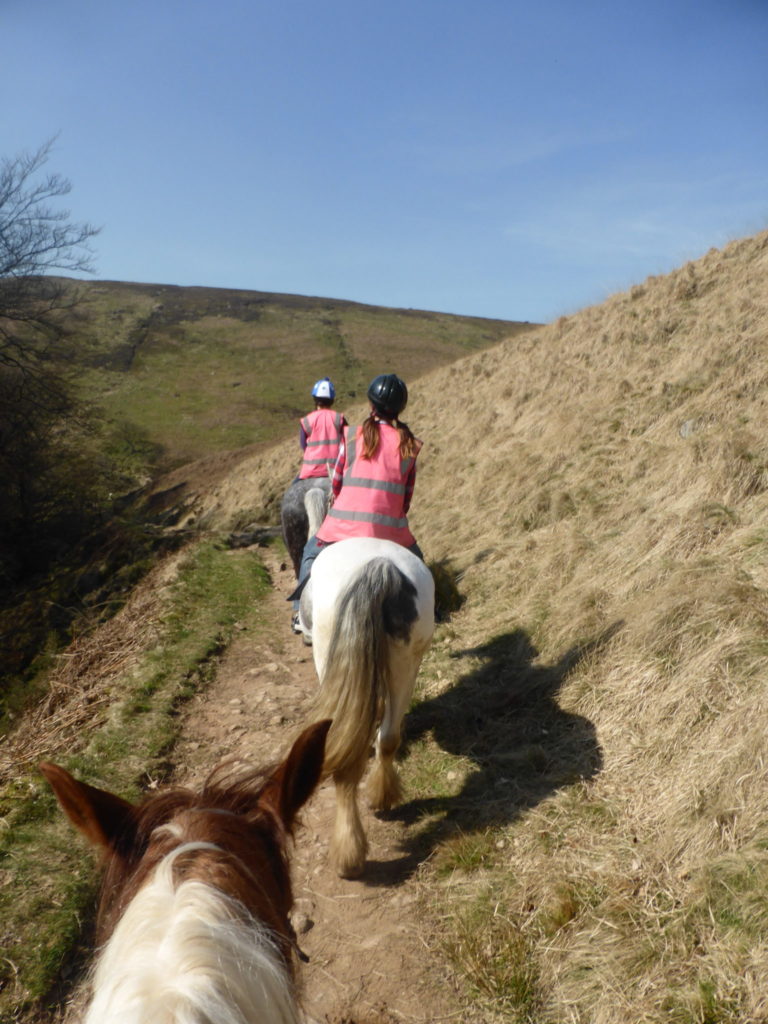 The ride took us on the old pack horse trails to Three Shires Head. This remarkably beautiful area is a series of small waterfalls underneath a packhorse bridge built in the 1700s. It was stunning. This is the place where three counties meet – Staffordshire, Derbyshire, and Cheshire. However, we didn’t get a lot of time to spend admiring the view. The main complaint we had with the activity was that the lady leading the walk seemed like a woman on a mission to get us all done as quickly as possible, and not really interested in getting the most out of the day for us. She also had a rather unusual mannerism of addressing us by the name of our horse rather than learn our actual names. This might be understandable if there were loads of guests, but there were only four of us! 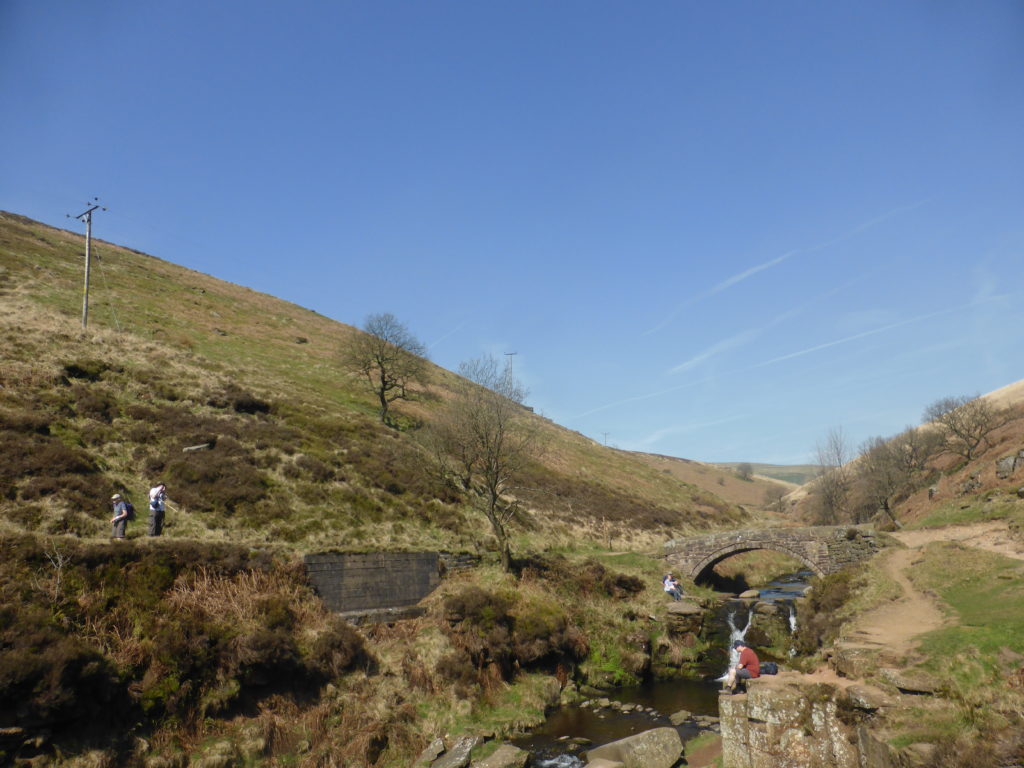 As it was, then, I didn’t even get the chance to even take a decent photo of Three Shires Head, much less let the views sink in. Worse still, Bonnie veered off a bit, so another horse got in the middle of us again. The views from up here were astonishing. We were high up on the hills overlooking a winding stream, with ancient walls and farmhouses surrounding us. One former farmhouse was now just its four outer walls, with a tree growing right in the centre of it! 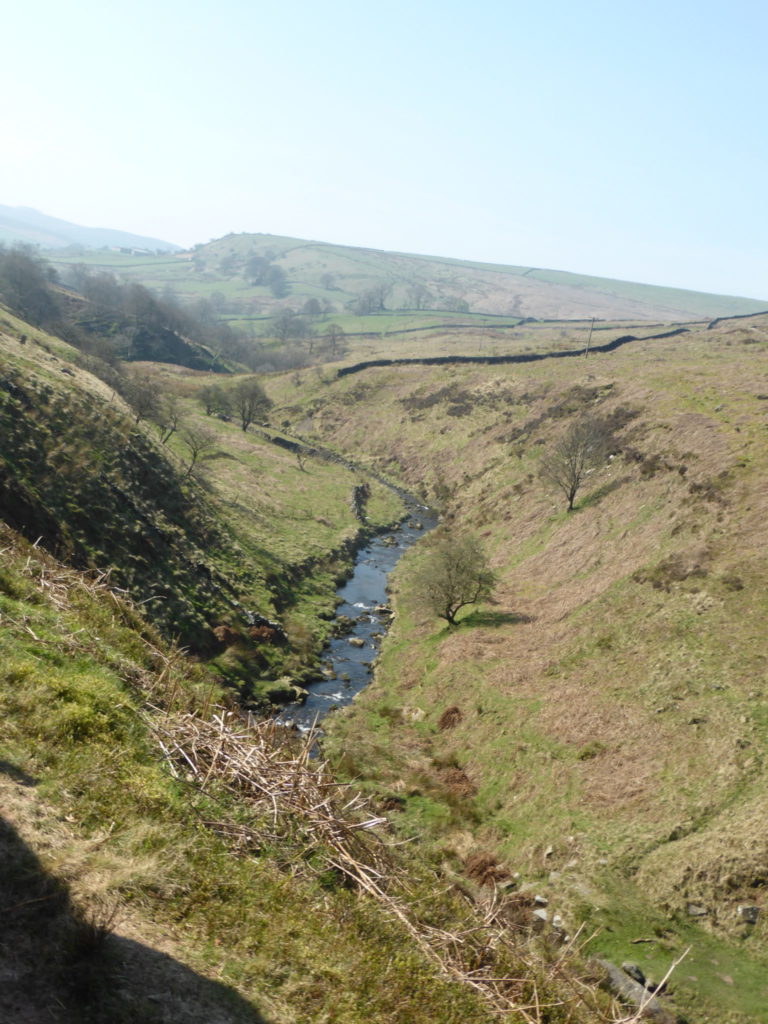 Trust the horse and hope for the best

The terrain was extremely rocky soon afterwards, which again led to some hairy situations where you kind of had to hope for the best! We were extremely high up, so it would have been disastrous to come off the horse at this point. The more accomplished riders broke off here to have a gallop. Our path turned into a mudbath at one point, which would have looked pretty cool for a photo. Just as I was struggling with the camera, Bonnie decided she had had enough of the mud, and jumped up onto the grass verge above it. Typical! I got told off for it! 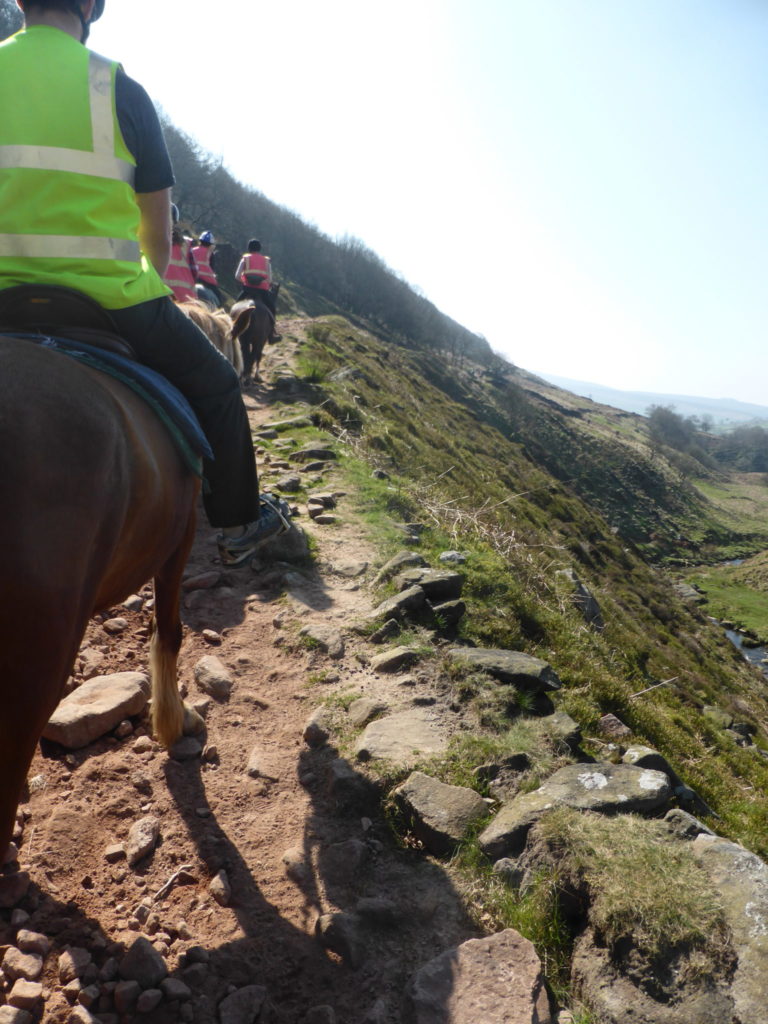 A sharp turning soon after, again got us trusting the horse’s instincts to get us down a steep bank and onto a tiny path that had barely enough room for the horses legs to get through. It led to a brook where the horses got a well deserved drink. Finally, I got the chance to pass the camera to Amy for the final part of the trail. The home stretch was up the steepest hill possible. We really felt for the horses trying to get us up there. We had to lean forward to make it easier for them. Overall, we had a fantastic time horseback riding and we’re sure it is a date idea that we will come back to, again and again! 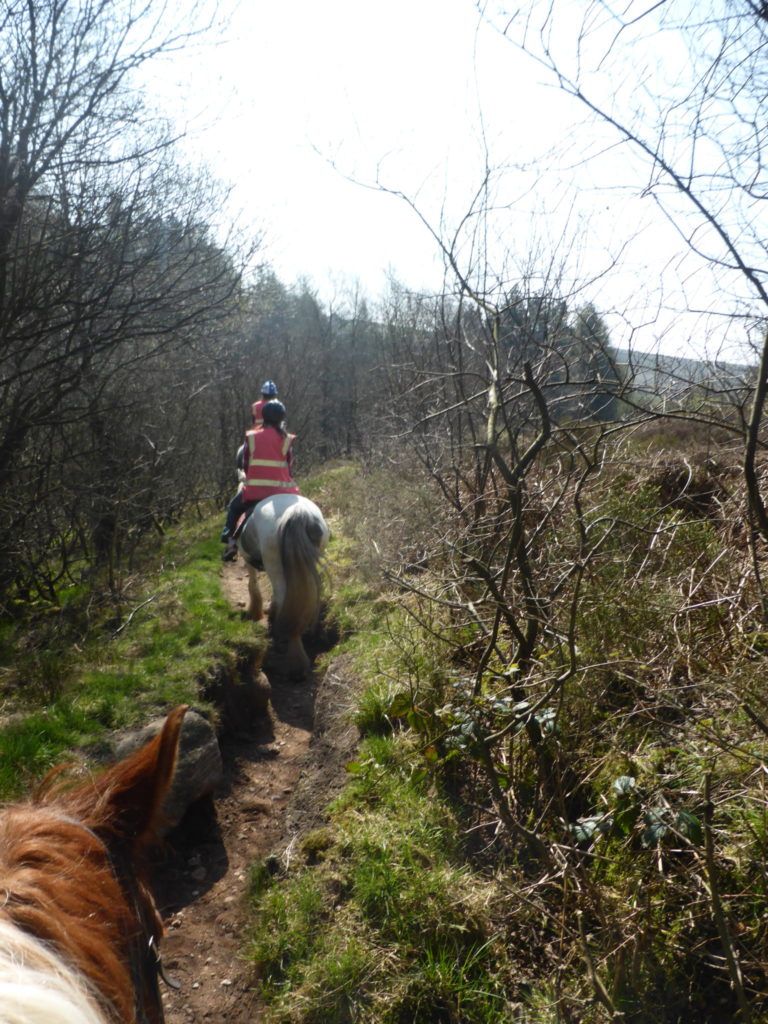 Have you ever been horseback riding on a date? What were your experiences?