Pecs is a gorgeous city in the south of Hungary, which was the European City of Culture in 2010. One thing that you really must try to see is Pecs Cathedral. This treasured medieval Catholic masterpiece was founded around 1000 years ago by the first King of Hungary, Saint Stephen. Stephen is one of Hungary’s most celebrated citizens, and their patron saint. His holy crown can be seen in the Hungarian Houses of Parliament, while you can even see his intact right hand in St Stephen’s Basilica (the main shrine to Stephen), both in Budapest. 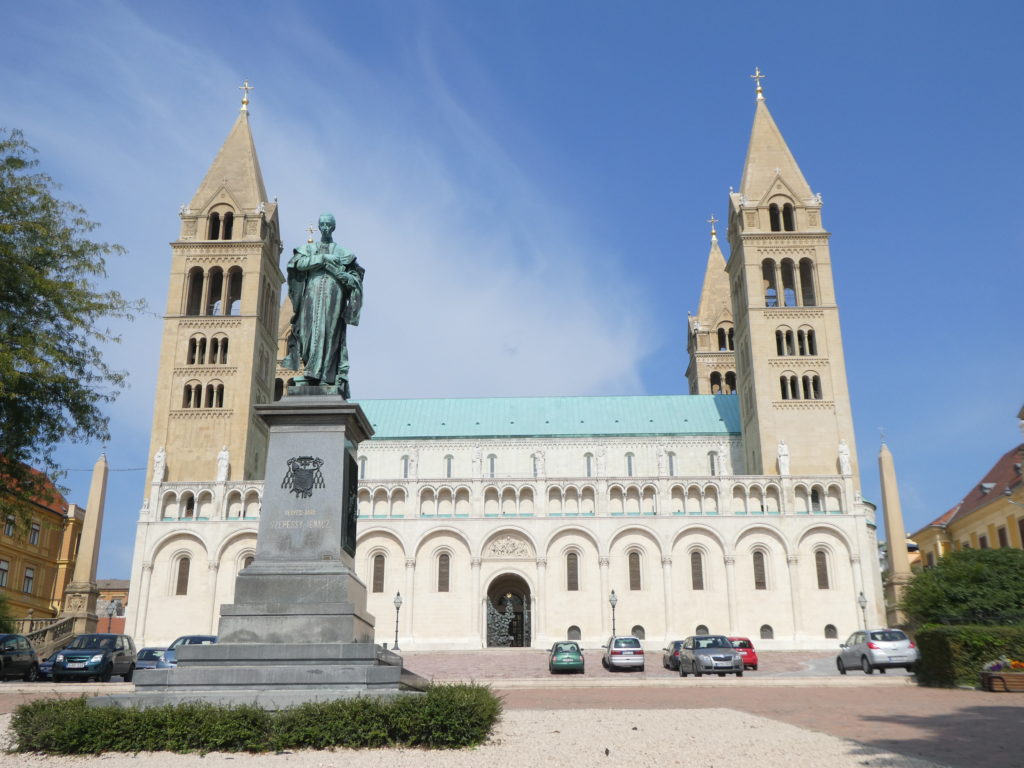 On your way to Pecs Cathedral, check out the huge and impressive display of love locks. They are everywhere! In fact, Pecs is the home of the love locks tradition, pre-dating those in places like Paris, which have become more famous worldwide for it. Nearly every bit of fence is covered in them. There is a real obsession with love locks in the city. There are even bike locks! 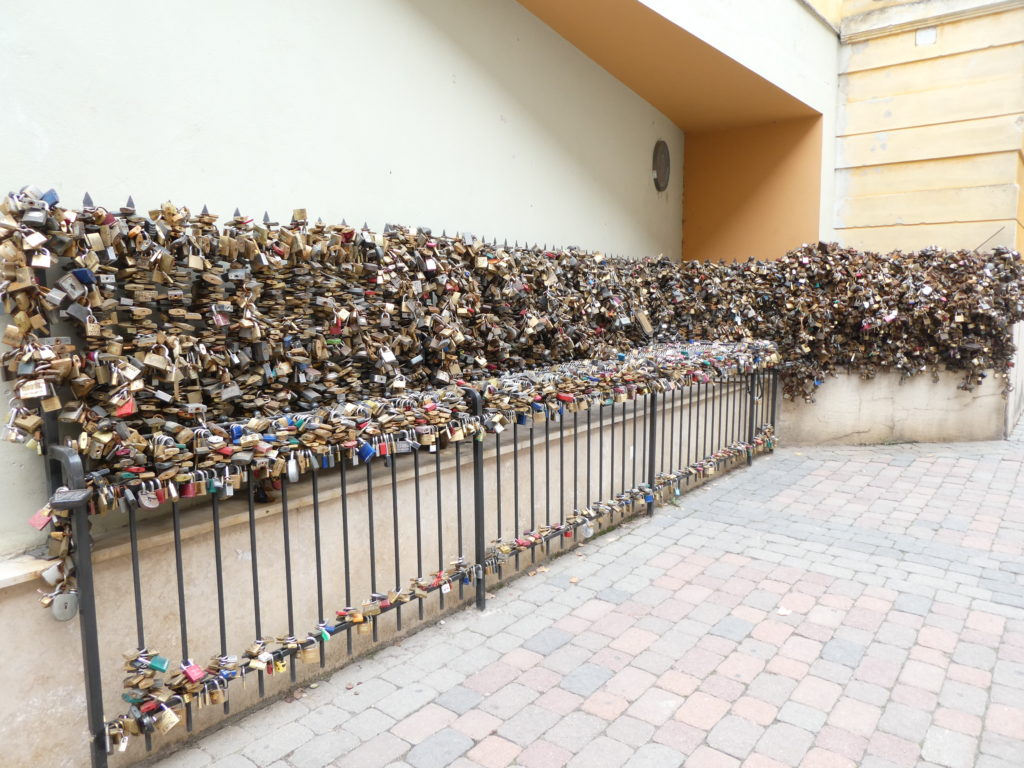 The foundations date back to Roman times

Also near to the cathedral, you can walk over a glass floor, below which are the remains of an early Christian necropolis which is a UNESCO World Heritage Site. It is really cool to see from above. The cathedral’s foundations are Roman, and even older churches were here before this one. Outside the main door of the Cathedral, you can’t miss the absolutely huge statues of the twelve apostles that once stood on top of the cathedral. They are about 3-4 times the size of an average person. 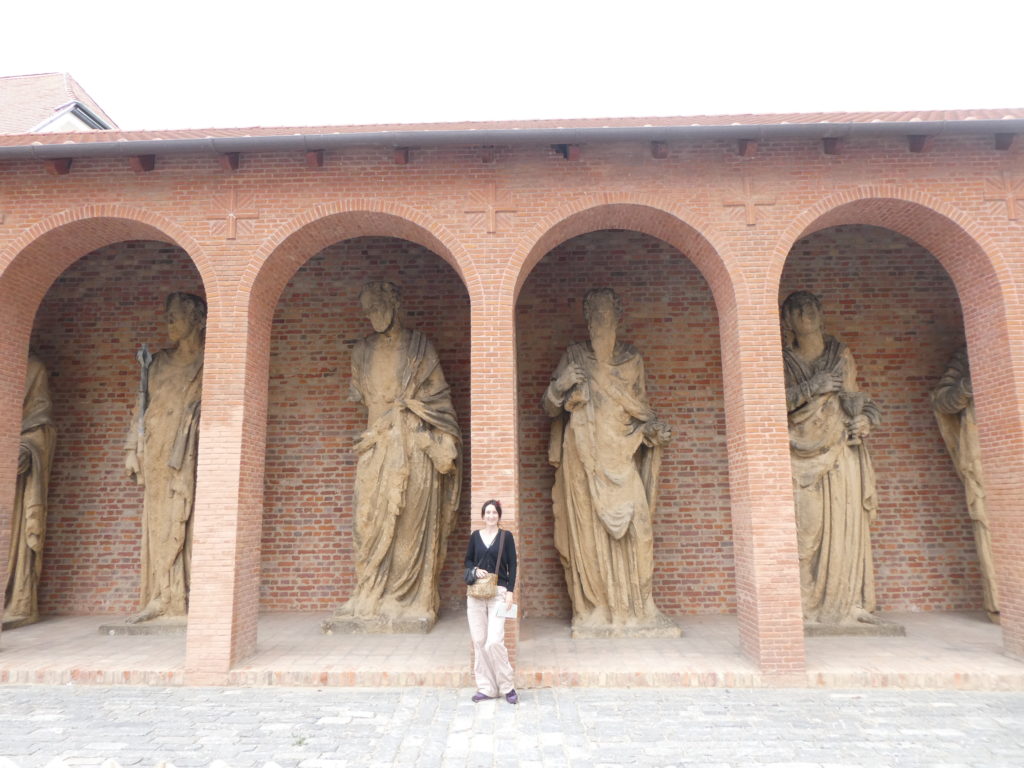 Pecs Cathedral’s official name is the Sts. Peter and Paul Cathedral Basilica. During opening hours, you can walk into the back of the cathedral for free to look at the overall view, but we highly recommend paying the fee to visit the rest of the cathedral. The fee includes all of the side chapels, the crypt, and the chance to climb the tower. The style is neo-Romanesque, due to a reconstruction in the late 1800s that followed the original architect’s plans. 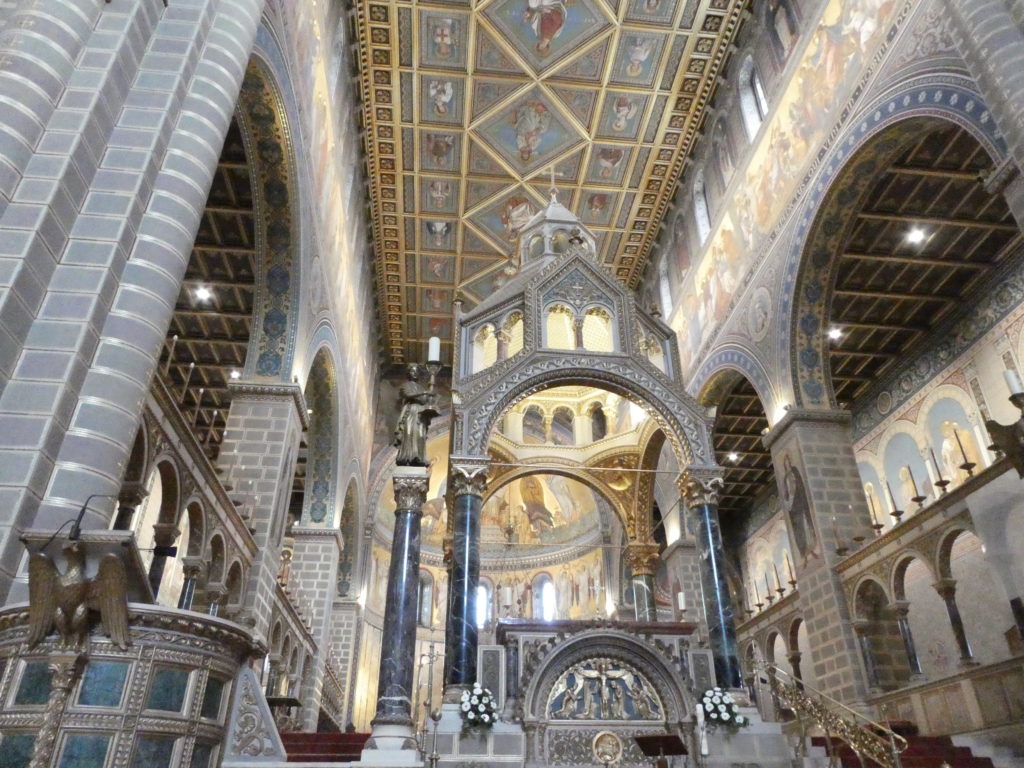 The paintwork is a marvel

There are four separate side chapels that date back to the 1300s, but only a couple are open to visitors. Two of them were painted by the same guy, Karoly Lotz, who did iconic works in Budapest such as the Parliament and Matthias Church. They are painted directly on the walls, and are in fantastic condition. The first chapel is the Chapel of Mary, which shows St Stephen putting the crown on the Virgin Mary’s head. It is truly awesome. 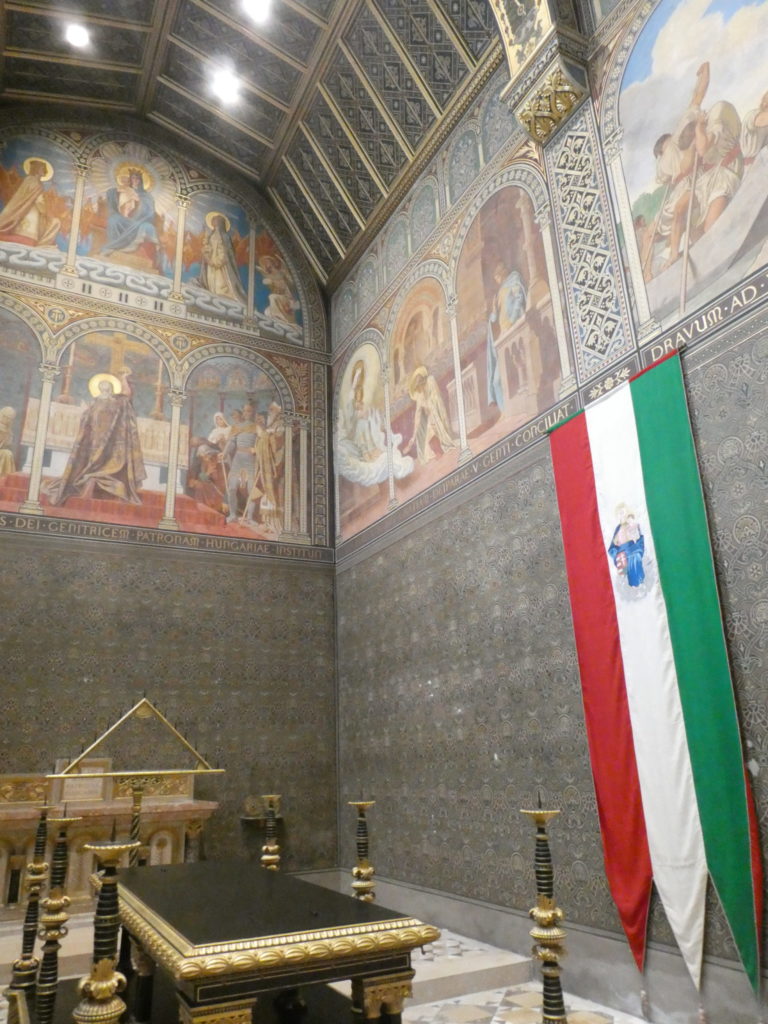 The second, painted by Karoly Lotz, is the Chapel of the Sacred Heart of Jesus. With gold everywhere, it is beautiful. Lotz painted distinctive gold tin-foil type halos on the heads of the Christian characters. The most impressive bit is a huge canopy, which stands out on its own. The amazing details on the walls will captivate. 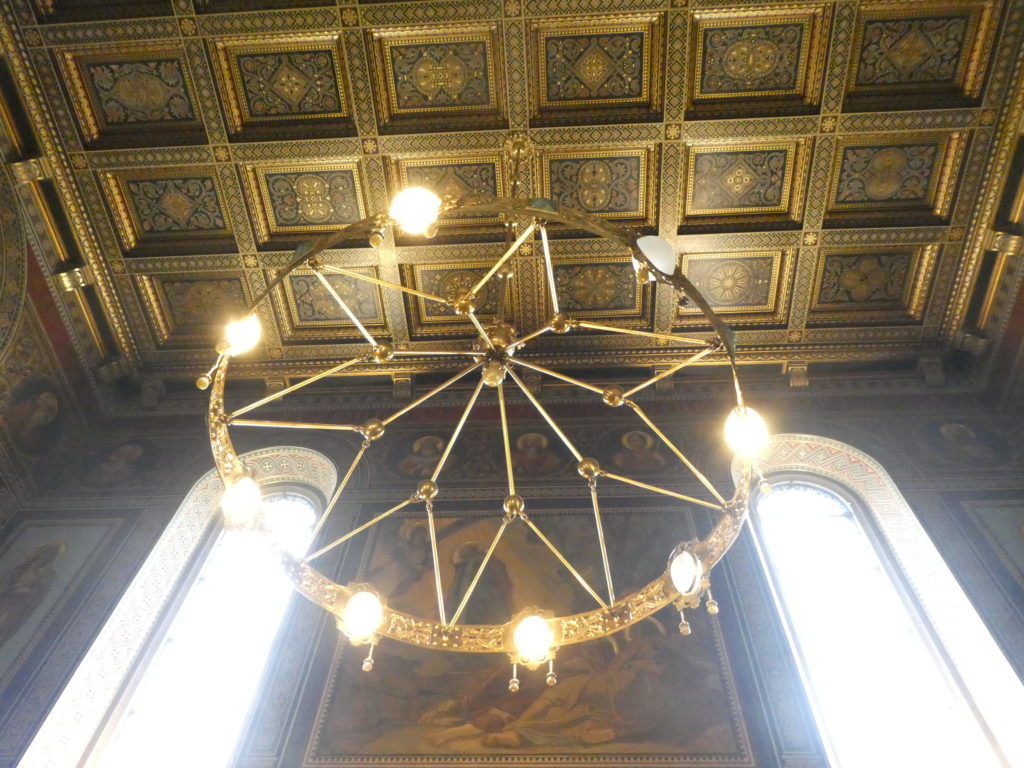 This is what you call a crypt

There are two different staircases that lead down to the crypt. It is a very large crypt, which dates back to Roman times. It is also the oldest part of the Cathedral. Don’t miss the carvings on both doorways. One contains stone carvings based on wooden sculptures from the 11th century. Both sides are individual. We went down one side that had a red painted background with a scene from the Last Supper and Jesus arriving on a donkey, whilst the other one is a scene of Jesus’ nativity. They are quite cool as they have a medieval 3-D effect to them. 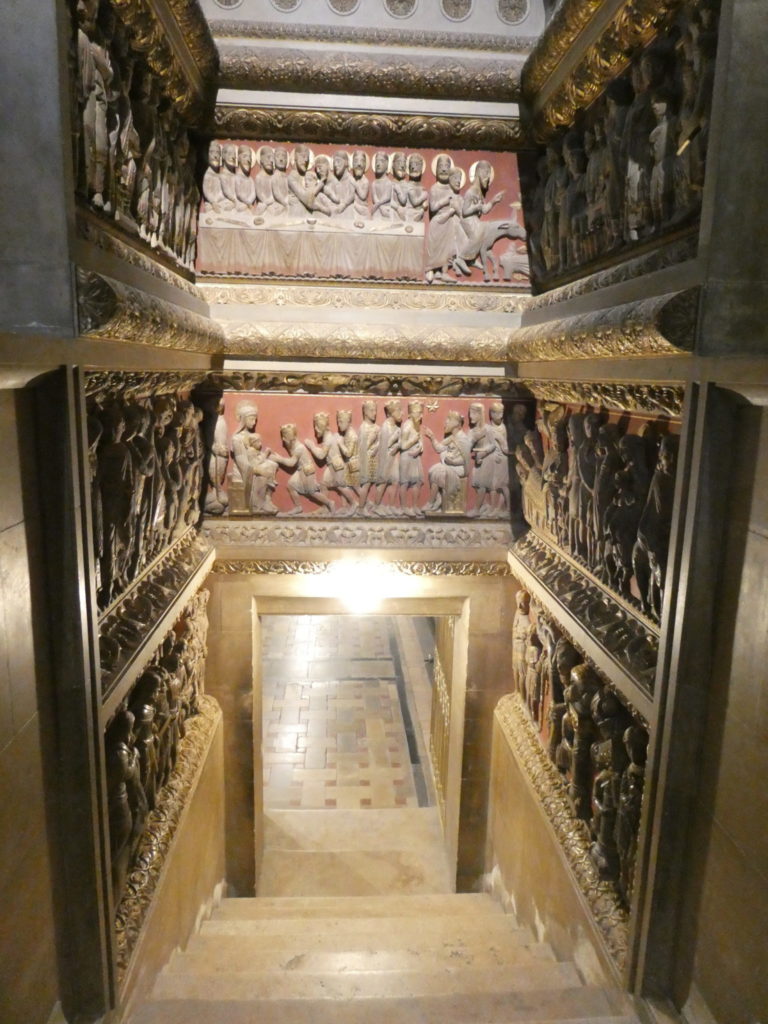 The crypt is unbelievable. A big open space, but it still has all the paintings. It is a five nave structure, which is quite unusual as most only have three. The wall has a really cool little image of a weird little baby dragon, maybe a phoenix. It has even inspired a cuddly toy that you can purchase in the cathedral shop! Some former bishops are buried in the crypt. There are three models showing the cathedral during three stages of its existence and how it has changed over time. 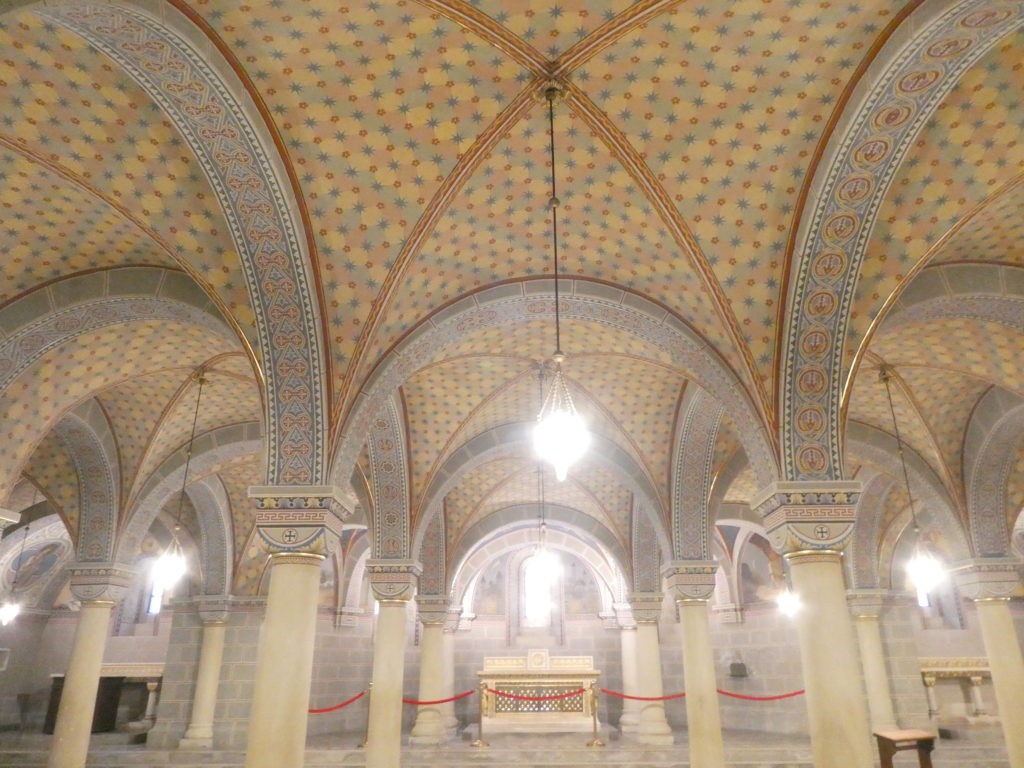 Make sure to check out both doorways to the crypt

From here, we went out through the other entrance. The sculptures on this doorway look like playdough! They are really quite cool. This side has an alteration. The panels have the red background, but the front is done with blue which makes for an amazing contrast. It seems to show an image of Jesus being crowned by some angels. 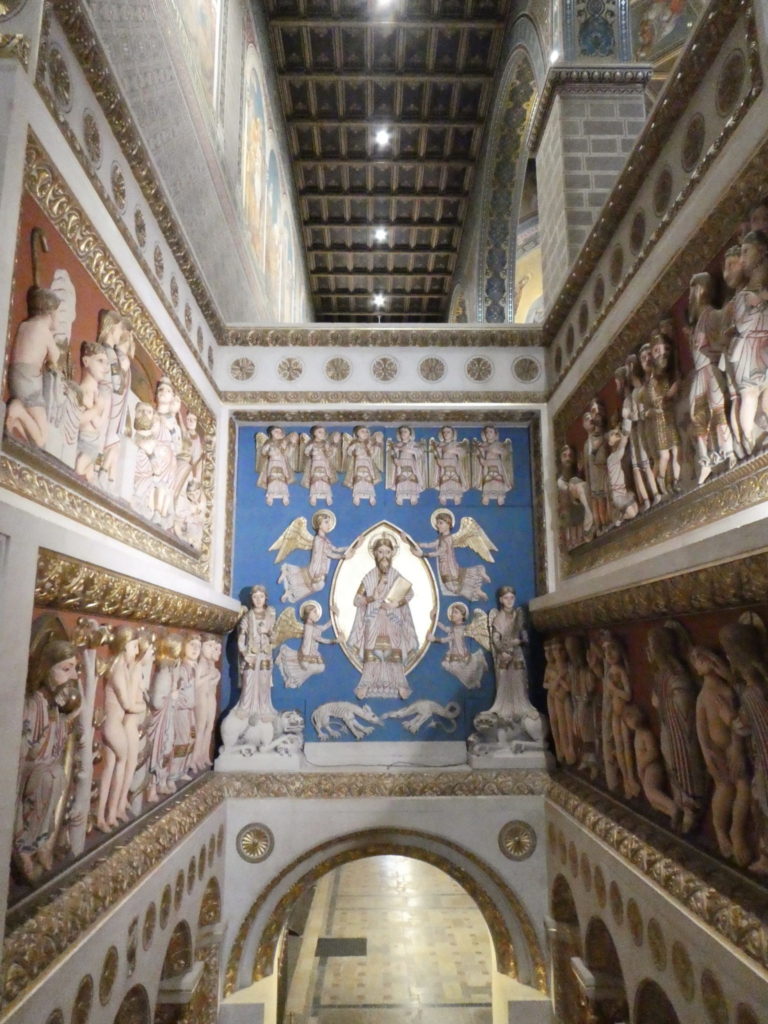 To get to the bell tower, you walk up some stairs next to the crypt, and from here you get an amazing view of the back of the cathdral. You’ll be level with the stunning elevated altar that definitely shows some Eastern influence. You can see the cathedra where the bishop sits at the very back, and a beautiful painting of Jesus on the throne. Mary, and maybe Peter and Paul stand either side of him. 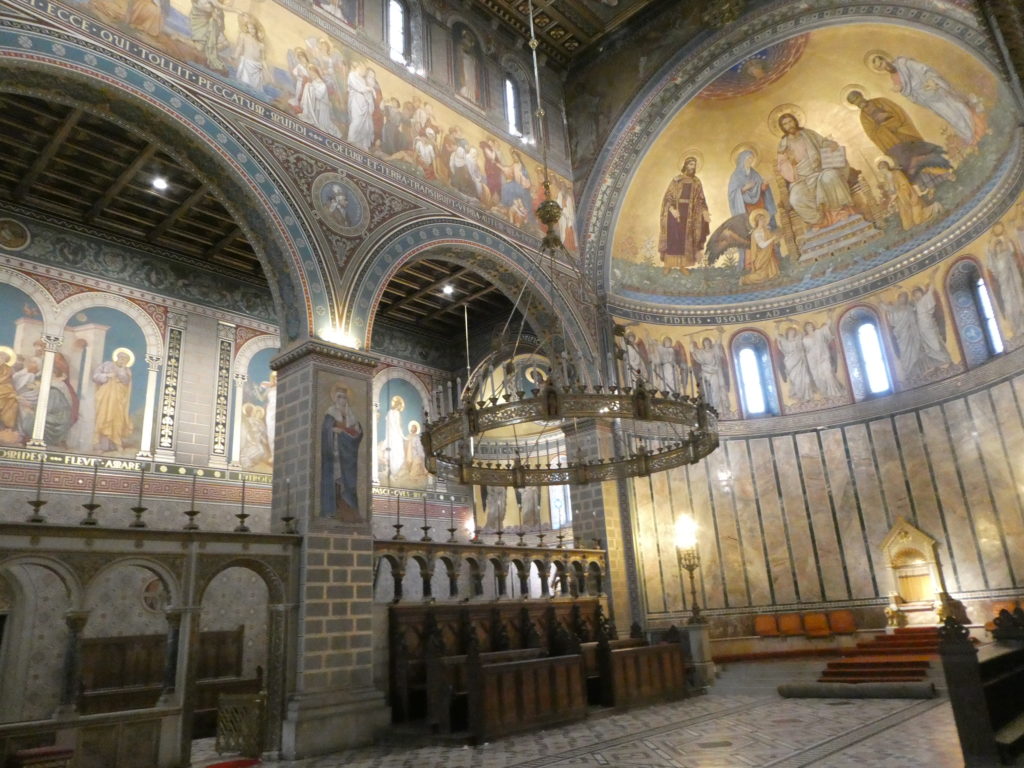 At the very back is a very wide wooden staircase. Information panels on the way up tell you interesting historical facts about the cathedral. 133 steps take you to the top. Eventually, you’ll come face to face with the cathedral’s three bells. One only gets used at 12pm on a Sunday. This is the Francis of Assisi bell, the largest of the three. Just above it is a big open area with railings and fences. It is a really wide tower, not a cramped up one like many are. You don’t go around in a circle in this one, you can literally walk from one side to the other. 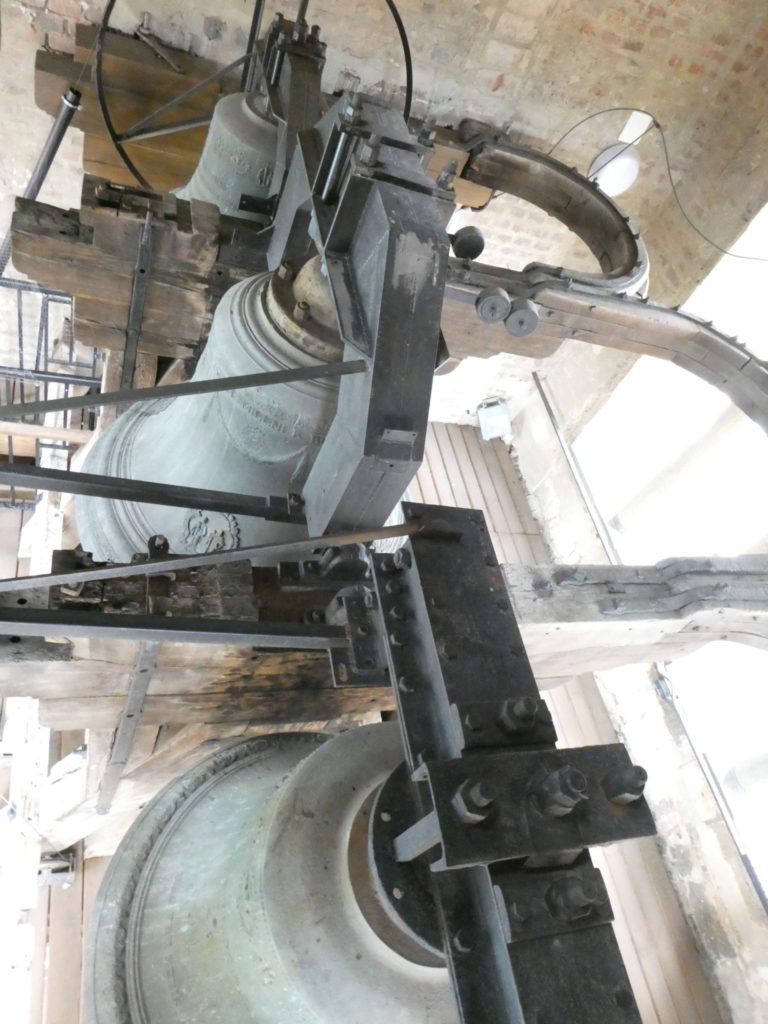 What is nice are the pictures showing what buildings you can see from all four sides. You’ll also see some of the original stone city walls that used to surround the area. It can get very windy up there, so isn’t advisable for anyone with a huge fear of heights. If you can cope with the heights, however, the views more than make up for it! 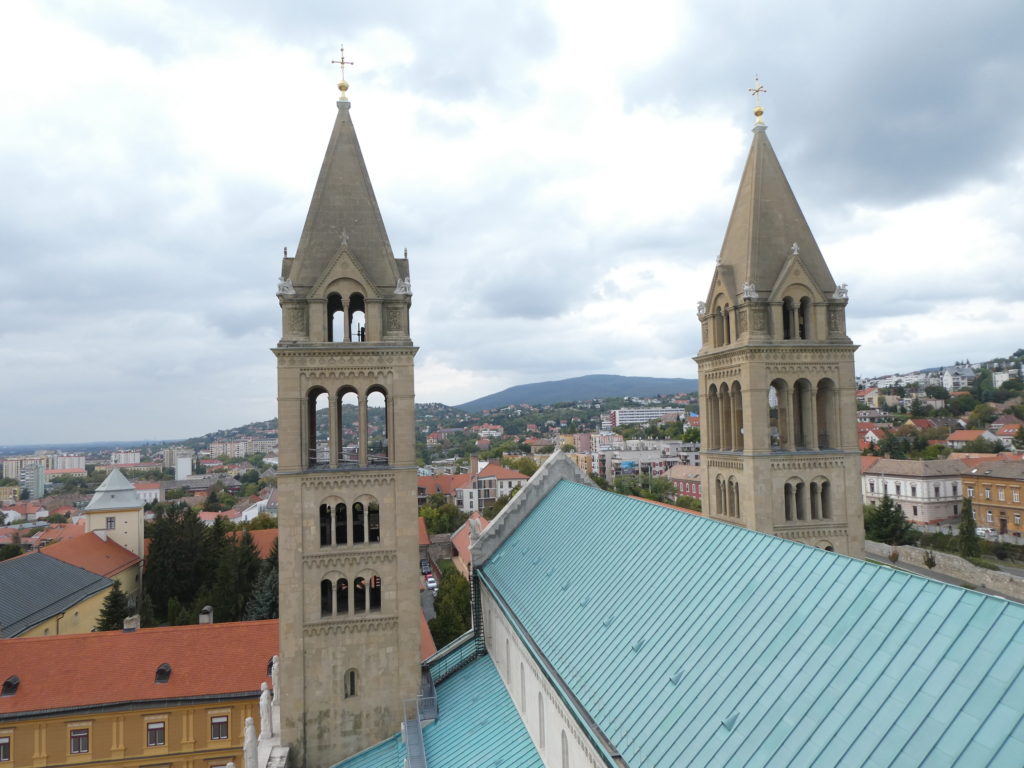 Which is your favourite cathedral? Have you been to Pecs?

We were visiting as the guests of Pecs Cathedral, but as always, all opinions are our own