We have just returned from a trip to North Wales, and our first stop was Conwy. We have driven past Conwy many times and always been struck with awe. Finally, it was time to visit. As we arrived half an hour before Conwy Castle opened, we decided to walk along the Conwy Town Walls. The town walls are among the best preserved medieval walls in Europe. They were built at the same time as the castle, between 1283 and 1287. 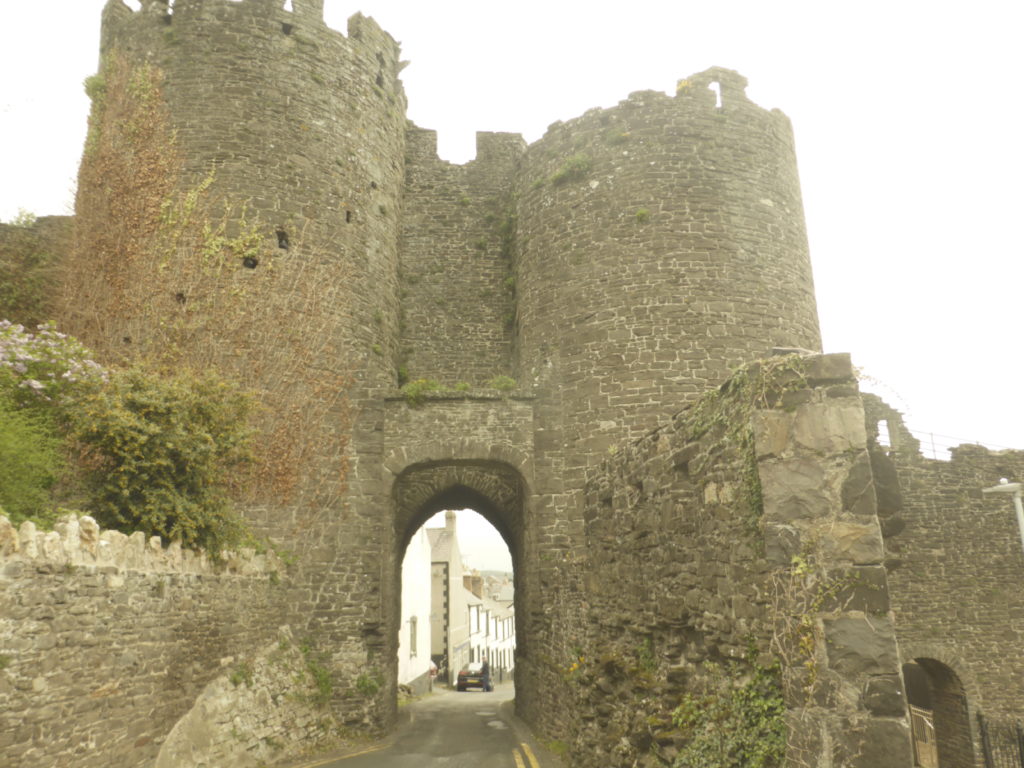 We entered at our closest entrance, Upper Gate, and decided to head east. They are accessed by a modern spiral staircase. Right away you will be struck by amazing views of Conwy Castle, a Hillmans Wonder of the World. We were faced with two directions in which to go. As we were going to the castle afterwards, we headed away from it. The walls have an atmosphere of their own, almost timeless. Even with the odd sighting of cars or fellow tourists, the rather morbid serenity is startling here. Birds feel right at home along the tops of the walls. You kind of feel like you are invading their space. 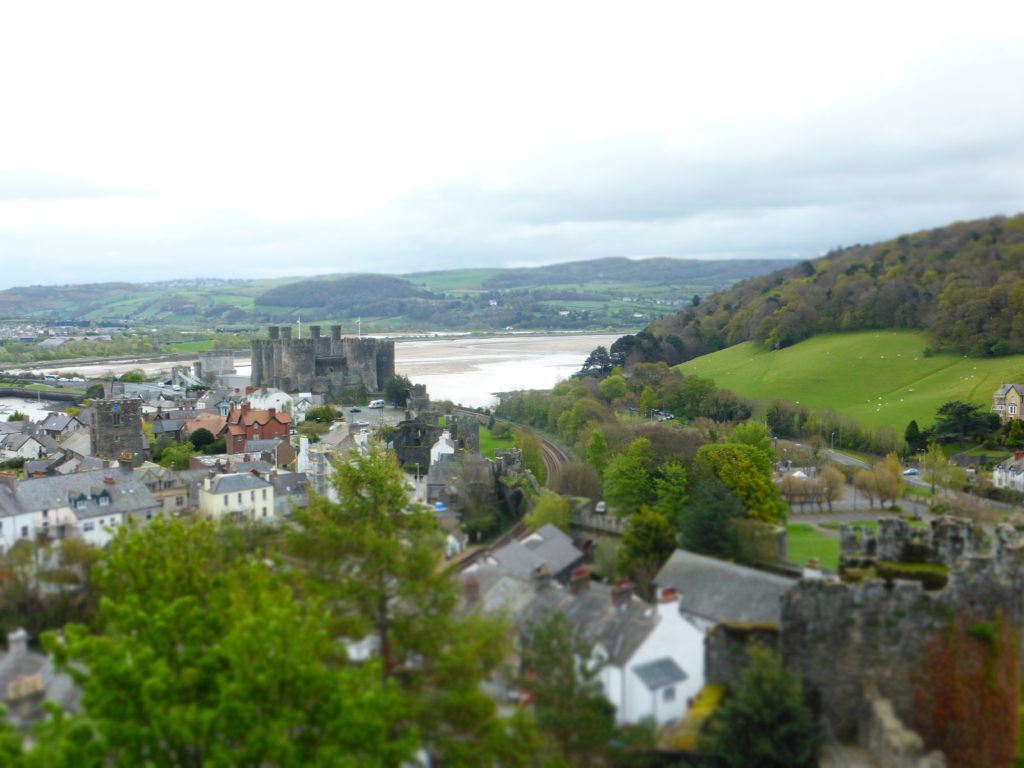 Some parts of the wall involve a rather steep climb. There are sheer drops on the inner side of the walls. Only a short fence prevents you from falling. Therefore, you really have to watch where you are going, particularly with the medieval paving. Whilst from outside, the 21 towers of the walls appear to be full, they are actually open-backed. This was a medieval defence mechanism. By using wooden bridges to connect the towers, they could easily isolate each tower if it came under attack. 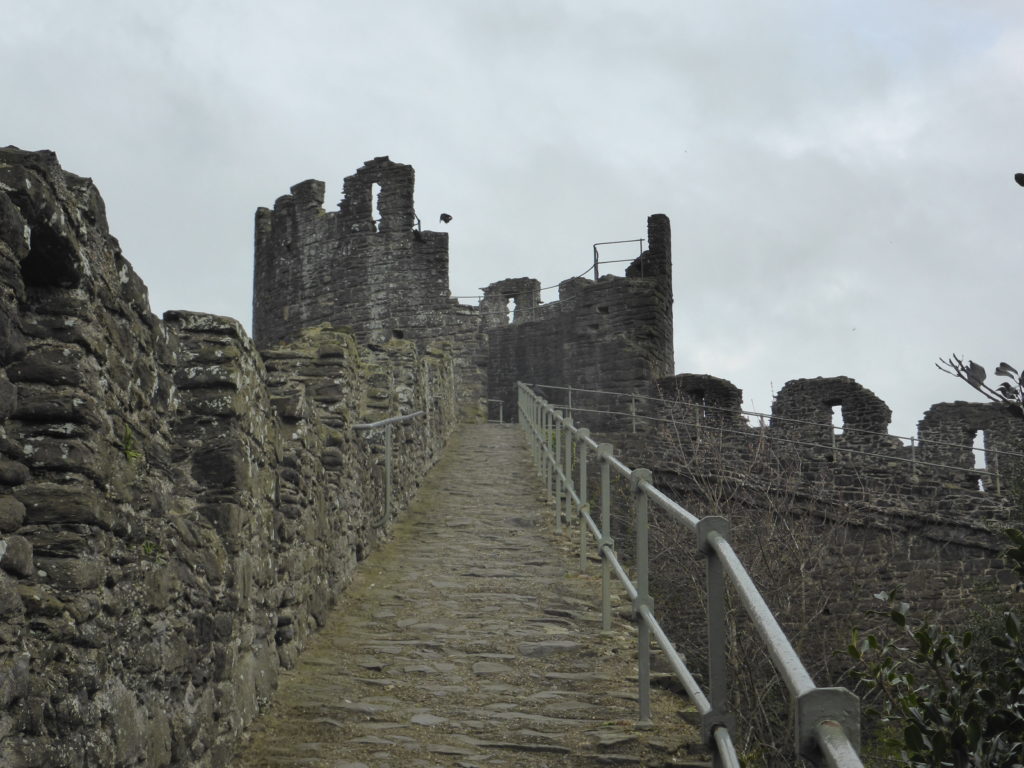 Oh I do like to be beside the quayside

The last stretch of the wall walk took us down an almost straight path down to the quayside. One of the towers offered the chance to head down its winding steps to cross one of the wooden bridges. This gives more of a feeling of how the towers were connected in the past. The walls have thankfully escaped modern building work, apart from a couple of road entrances. However, the inside of the walls is filled with quaint houses that have some very interesting chimney pieces. Some houses seemed to have their very own medieval tower as a back garden. There is even an outdoor table set up in one! 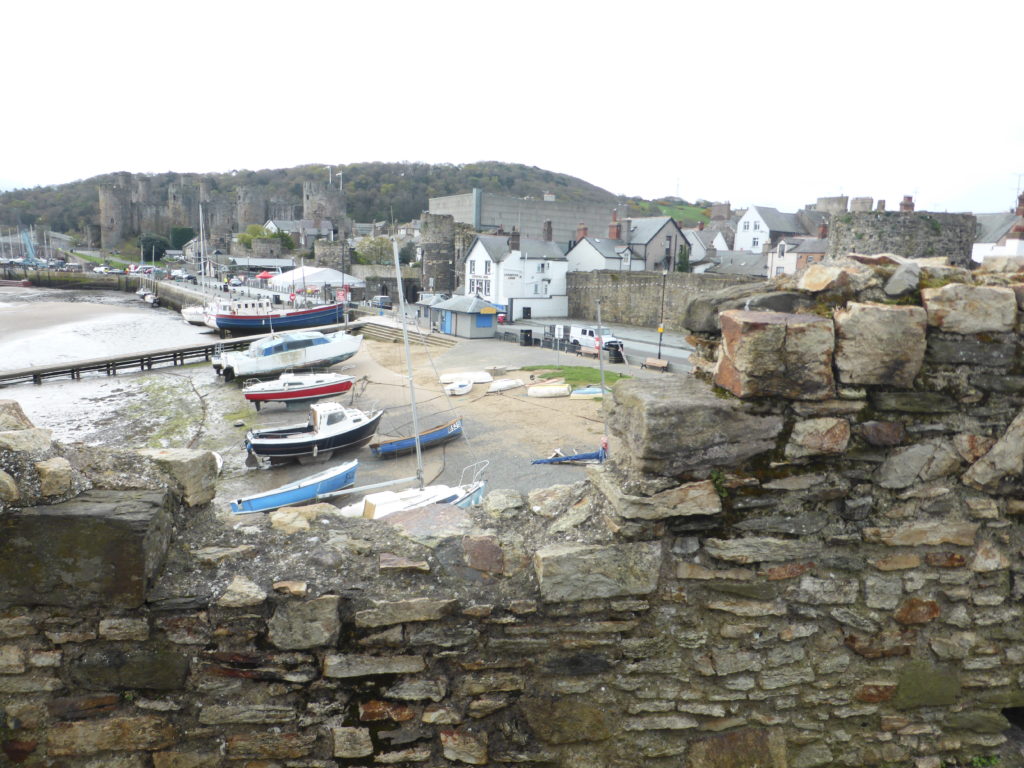 The end of the walls at this point had the remains of a spiral staircase to go even higher up. We exited the walls near to the quayside. We couldn’t resist going in search of the Smallest House in Great Britain, which is nearby. On the way to Conwy Castle along the quayside, we happened to see the Conwy Mussel Sculpture. This represents the importance of mussel fishing to the town. Unfortunately, it is rather badly placed in a car park, with cars potentially parked close to both sides of it. 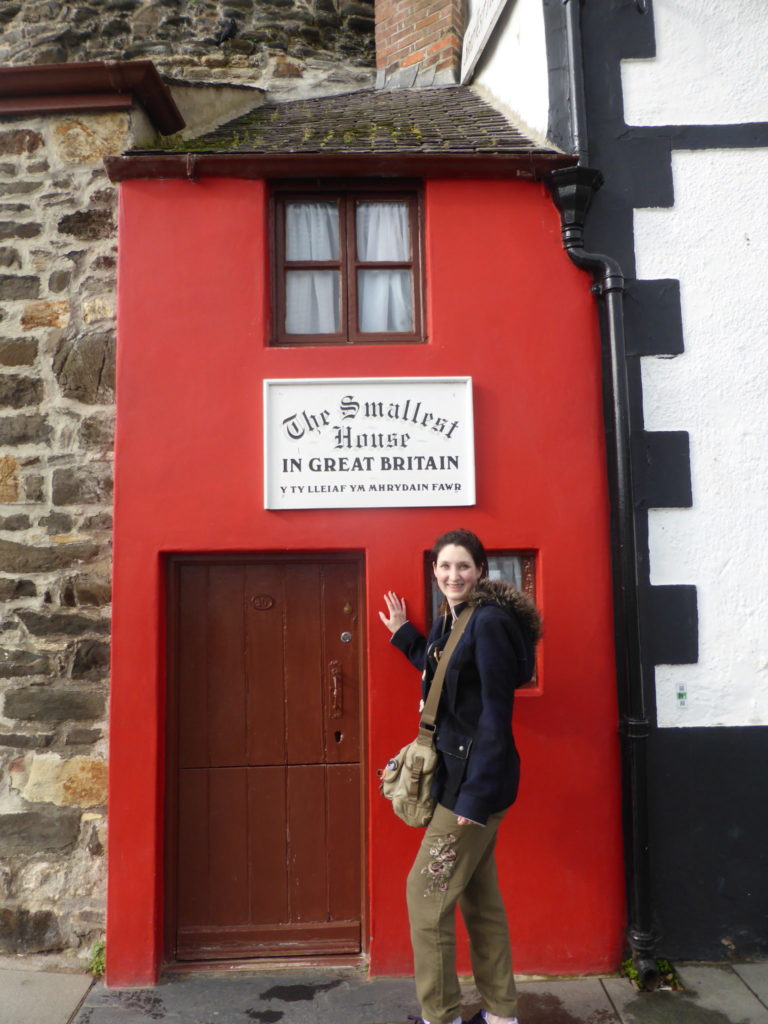 Over seven hundred years of history

We reached Conwy Castle by means of a large wooden ramp taking you up to its level from the road. Conwy Castle is a medieval castle, part of the UNESCO World Heritage Site that encompasses the castles of King Edward I in Gwynedd. It has seen many battles, including the siege of Madog ap Llywelyn in 1294. The castle was also the site of fierce negotiations between Richard II and the Earl of Northumberland in 1399, and just two years later saw another siege, this time by Owain Glynwdr. Since the English Civil War, the history of the castle has been far more peaceful. It was purposely ruined, leading to its now romantic atmosphere, favoured by painters such as Turner. It is run today by Cadw, who do a great job running it as a successful tourist destination. 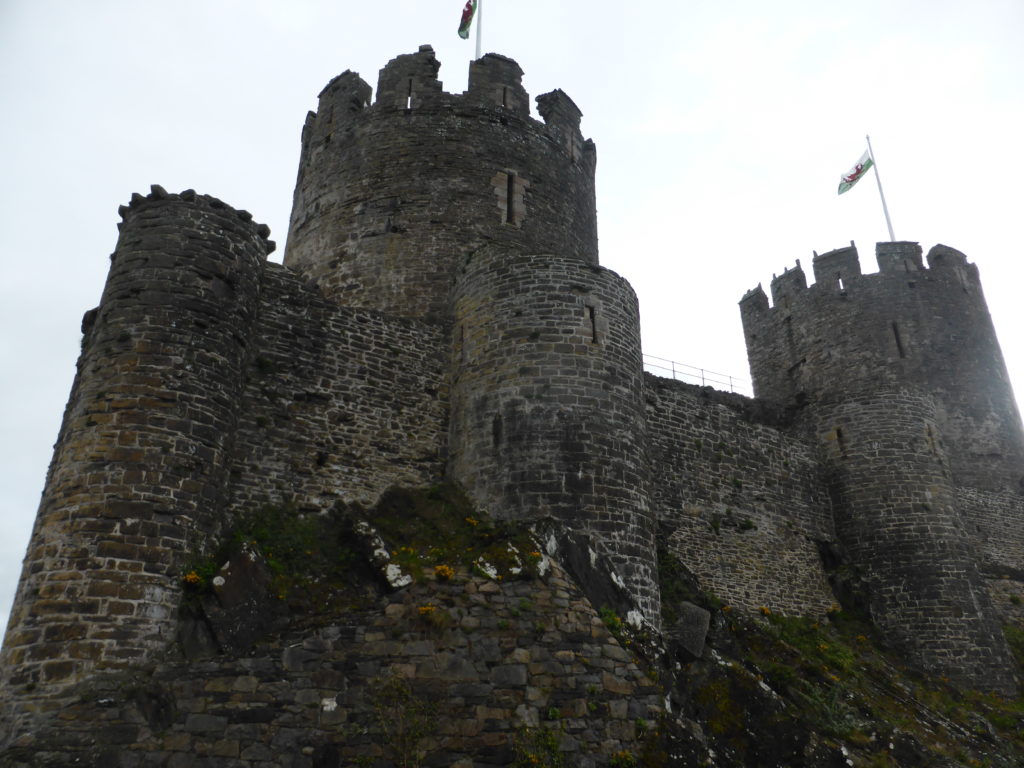 The first thing you approach is the Outer Gate. The Outer Gate once had a wooden drawbridge and a portcullis, with bits of evidence of this still visible. It offers a nice lookout over the town. Through the imposing gate to the West Barbican, you get tantalising glimpses of the iconic sights within. Murder holes, which allow all manner of things to be dropped on would-be invaders, abound in the castle. A few can be seen here, possibly amongst the earliest examples in Britain. 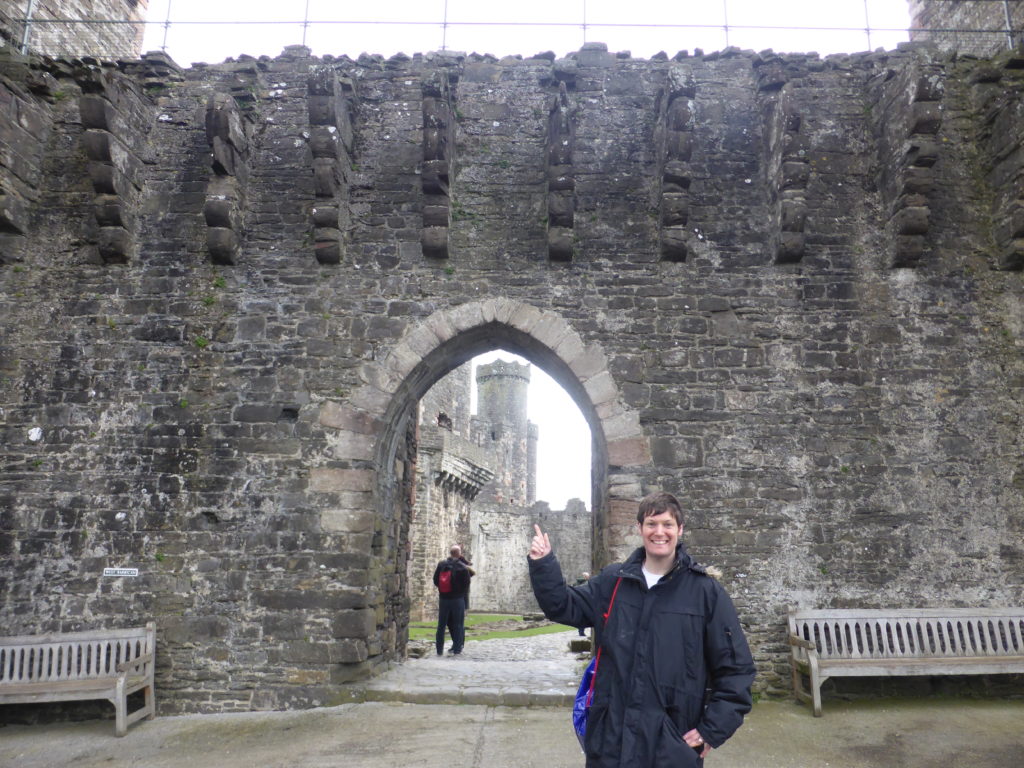 In the Outer Ward, you are greeted by ‘The Guard’. This large and striking wooden artwork by artist John Merrill provides a great photo opportunity. The Outer Ward is comprised of a scenic, ruinous courtyard, surrounded by towers, which are able to be climbed. One of the things that we loved about Conwy Castle is that you can seemingly go anywhere you please. There doesn’t seem to be as much emphasis on health and safety as in other places. Whilst this may panic parents, it is great for anyone with a sense of adventure. The courtyard would have once been packed with buildings, which have now been lost, with only the foundations visible. Therefore, it easy to forget that this was once as busy as any town centre. 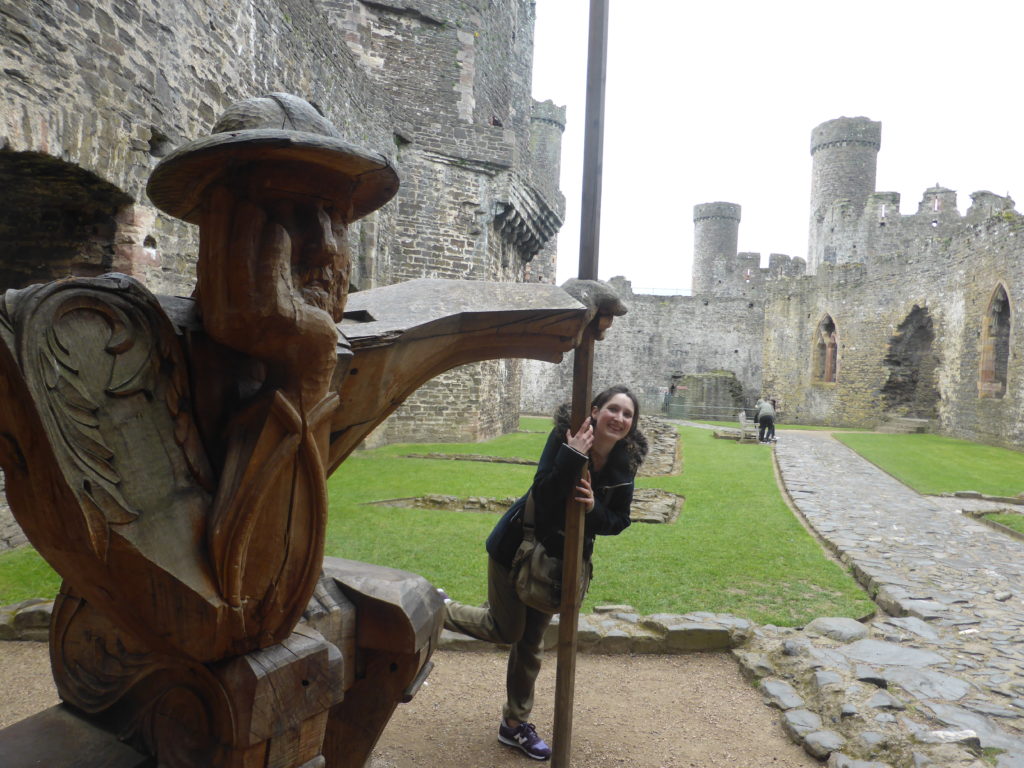 The towers are now mostly hollow, with only the wall features still visible. They include some grand stone fireplaces and arrow slits for archers to defend the castle through. Much of the castle can seem dark and stereotypically medieval, yet there are often majestic large windows. Some have seats next to them to admire the views from. Don’t forget the latrines – medieval toilets, which were considered quite a luxury. The towers take you up to the wall walk. However, it is advisable to ascend and descend each tower individually, in order to avoid missing any of the details. 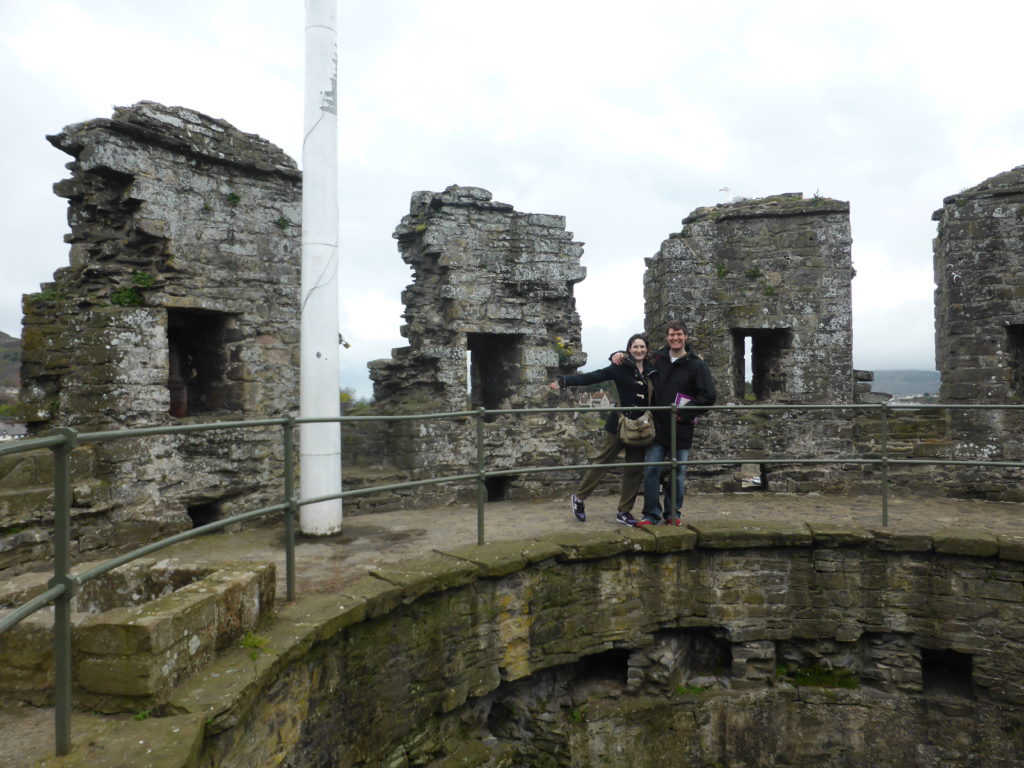 Is there a more romantic view than Conwy Castle?

The views up on the wall walk defy belief, however. There is surely very few more romantic images than these stunning ruins. Some of the towers allow you to walk around the inside of them. Unlike the towers of the wall walk, which are open-backed, these ones are fully enclosed. 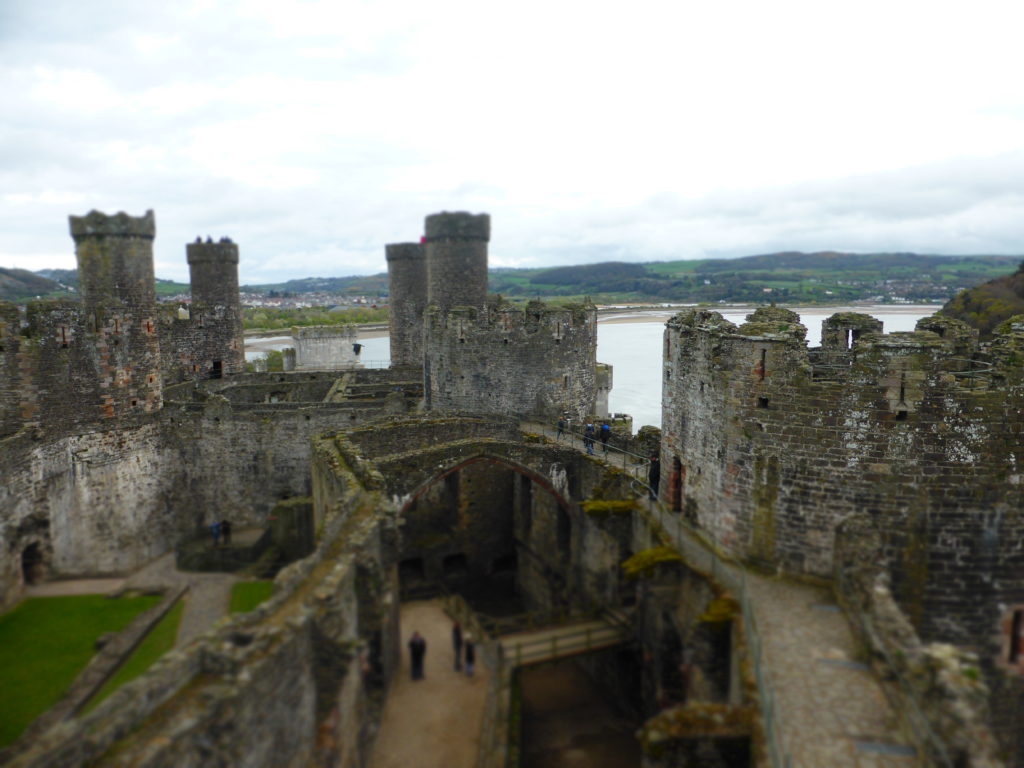 The South-West Tower has a huge sculpture entitled Llywwelyn’s Coronet, which represents the spirit of the Welsh people. At the top of the tower, a remarkable survival of a section of merlons (the upright section of battlements) can be seen. 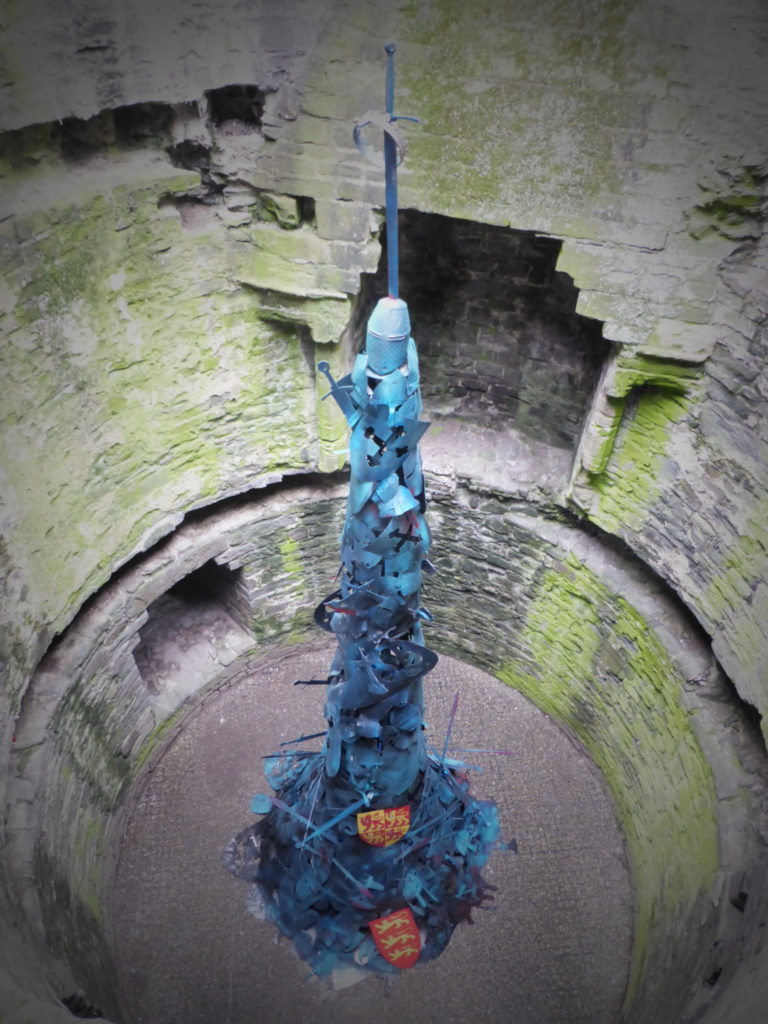 On the south side of the courtyard is a range of buildings that once contained the King’s Great Hall, and a large Chapel. Many of the windows in this range are very elaborate, with fine detailing on the Chapel’s large window. The Great Hall was once used for banquets and the like, as well as court hearings. You can imagine visitors to the hall either being full of excitement, or trepidation, depending on what they were there for. Indeed, just off from here is the Prison Tower. 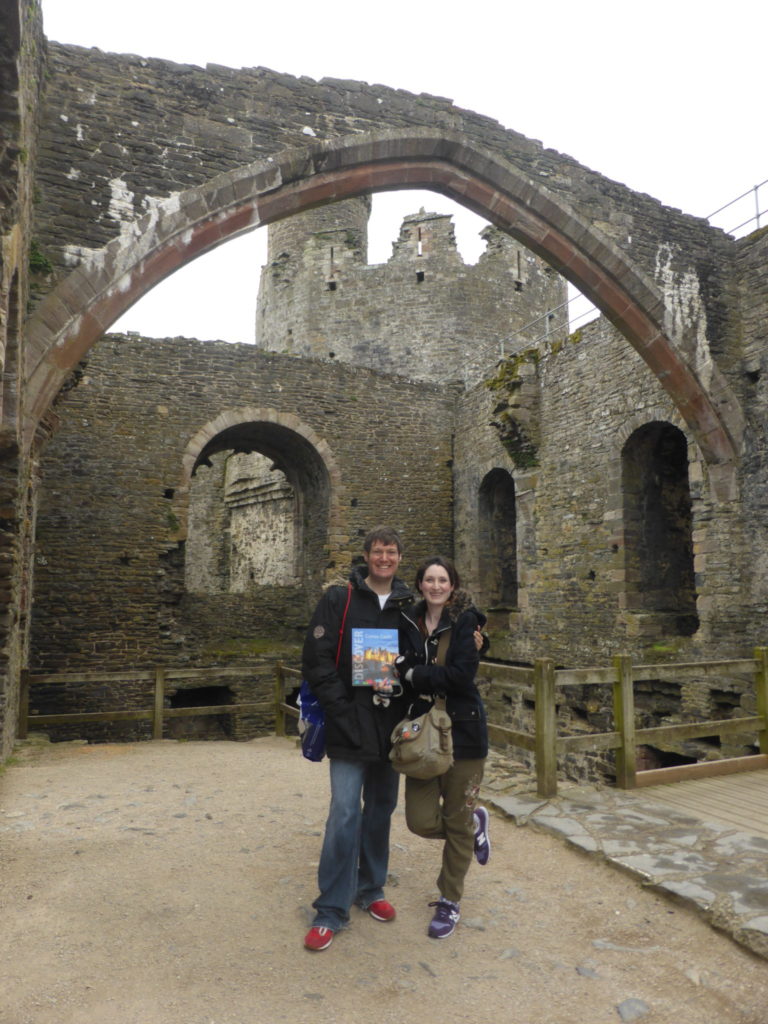 At the bottom of this eerie tower is a pit, known as the dungeon. There is no door to the pit, so prisoners must have entered it through a trapdoor from above. It seems to still be a prison tower for pigeons. Some of them unfortunately seem to get stuck inside, never to get out. There are amazing views to be had from the top of this tower, mind. You can gaze across the river or admire the town walls. 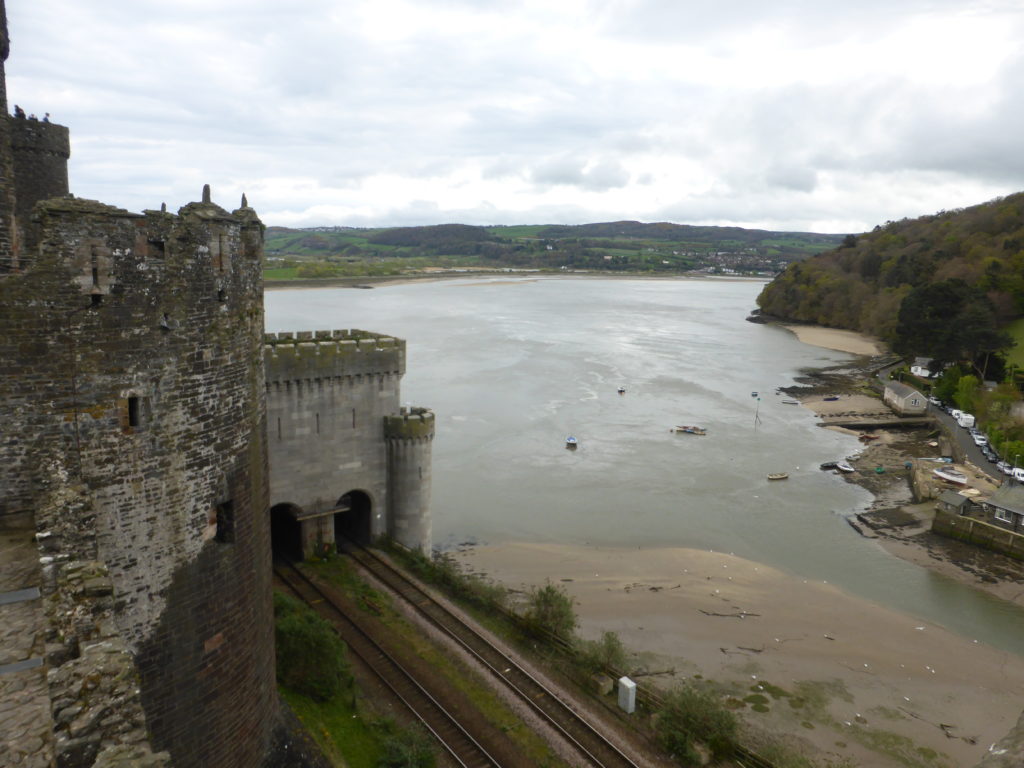 A divide between the rich and the very rich

The Middle Gate was the dividing point between the hive of the town’s activity, and the royal residences. Of course, these were markedly more luxurious. Just outside it, is a huge well, 91 feet deep. The Inner Ward, built by master craftsmen, contains the best-preserved suite of medieval royal chambers in Wales. They have lost their roofs and floors, but are otherwise unchanged. Despite being built for Edward I, however, he and his Queen, Eleanor of Castile, rarely visited. Edward I only spent a few months here, whilst Queen Eleanor never got to see the castle completed. 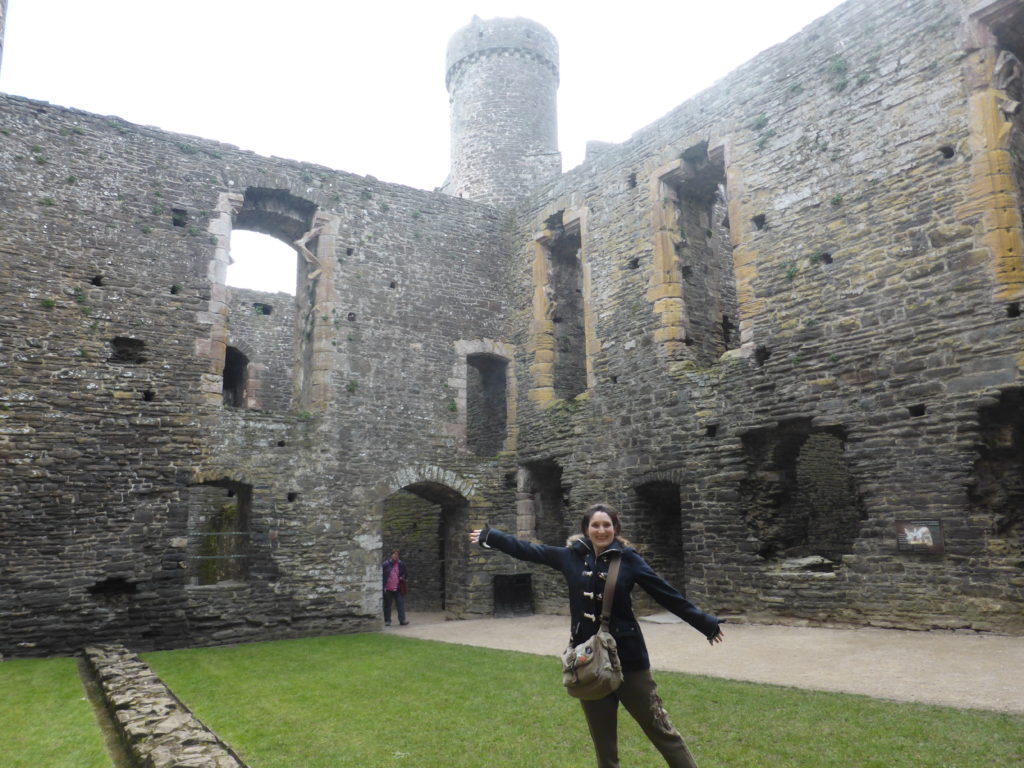 Through a gate lies the East Barbican, which provides amazing views of the three bridges across the river Conwy. The most impressive is Thomas Telford’s suspension bridge. There is also a modern road bridge, and the last surviving tubular railway bridge designed by Robert Stephenson. 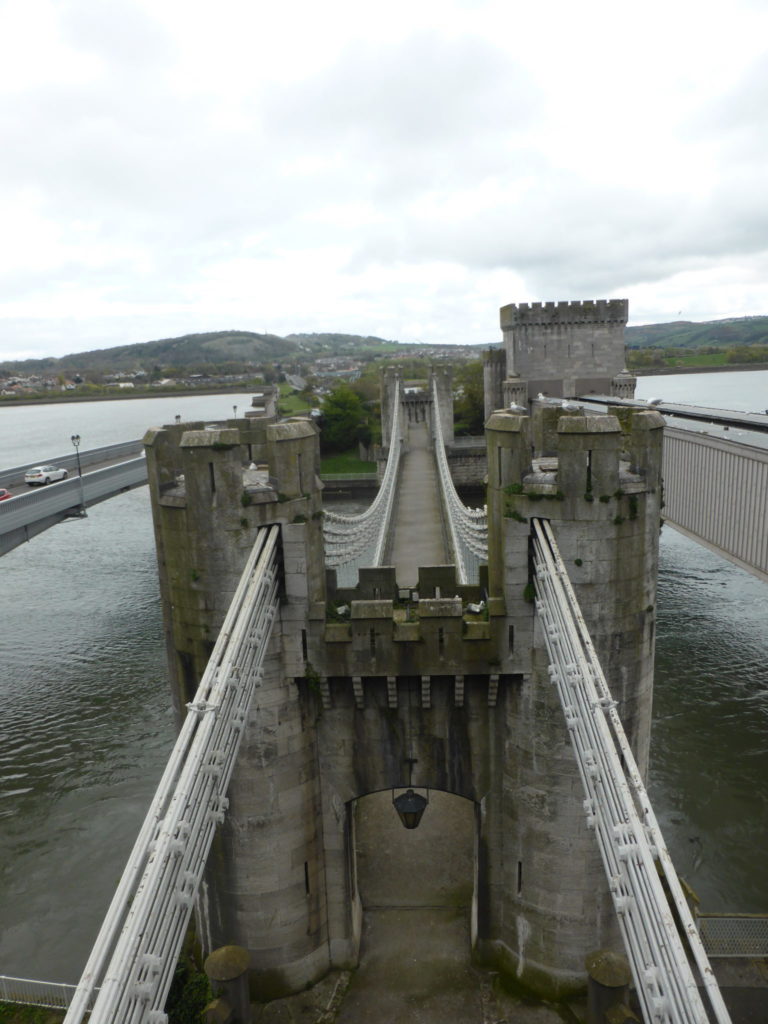 It is quite interesting to learn about how changes in royal etiquette and customs over the years led to changes in the uses of the rooms. The King’s Great Chamber would have been the grandest of all. It has three large windows overlooking the garden and river below. The Chapel Tower contains a scale model of the castle on its ground floor, and the private royal chapel above. Some beautiful stained glass windows from 2012 adorn the room now, with a fascinating watching chamber above. From here, the King could observe the services below in private. 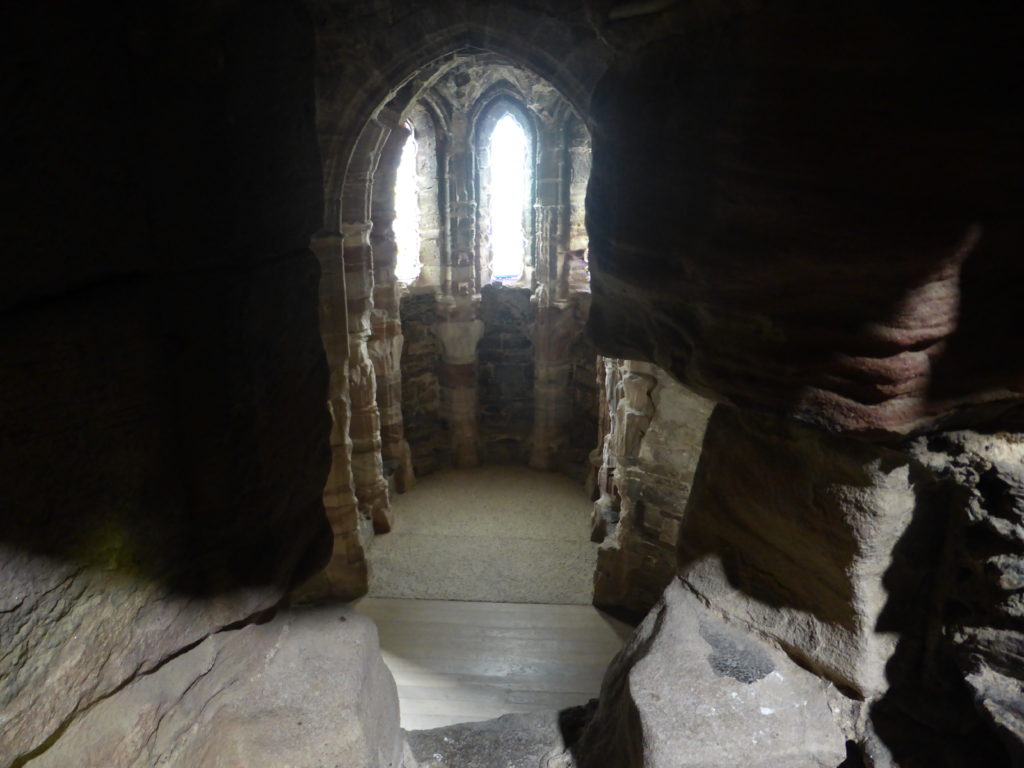 The room above the chapel contains a large fireplace, which cleverly uses technology to help you imagine a roaring fire. At the very top of the tower, you are faced with views that will make you go ‘wow’. It is a real privilege to see such a remarkable castle, almost in skeleton form. Without roofs and floors, you can see right through each room! It offers a completely new perspective on an already wonderful place. You will take so many pictures up here that your camera battery will start to dwindle fast. 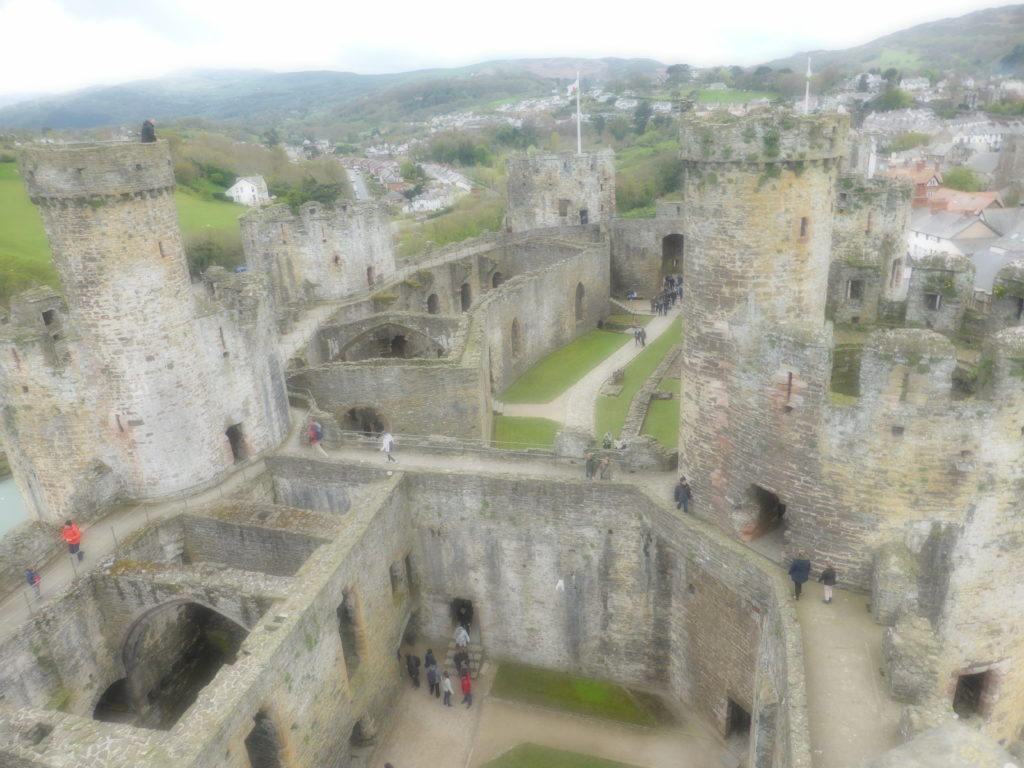 The adjacent King’s Tower is at the same height. Therefore, I encouraged Amy to head across there so I could take a picture of her in the tower alone like Rapunzel. What a great photo opportunity! After heading up the King’s Tower with Amy, to admire the equally stunning views, I headed back to get a picture like this myself! 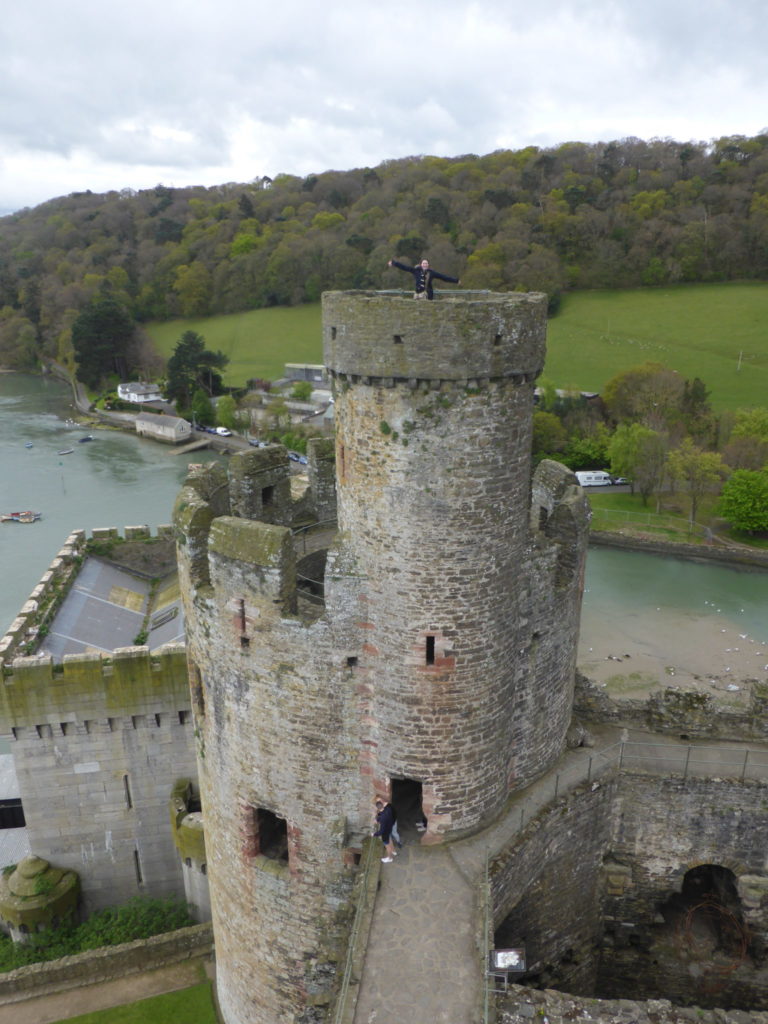 Heading back down to the ground floor, we stopped in the Bakehouse Tower. The bread oven was so large that you can climb into it. Next, we explored the Stockhouse Tower and Water Gate in the East Barbican. Lastly, we headed up the Chapel Tower again to access the wall walks. The wall walks form a complete circuit of the castle, with amazing views throughout. We really enjoyed a final stroll around them, taking some more cool photos before heading out. 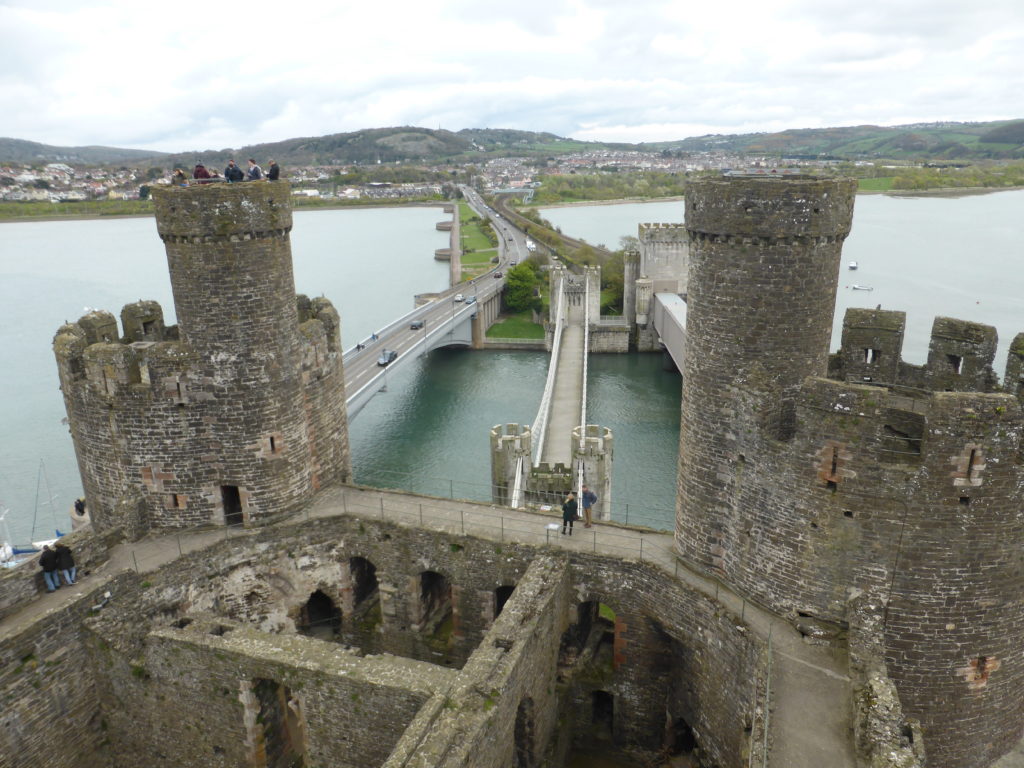 So, is it worth visiting?

Conwy Castle should take anywhere between one hour and five hours to visit. There is a free leaflet given on entrance, which provides a small amount of information and a map. Also, entertaining information boards are dotted around the site, which help to bring the history to life. However, we recommend buying the official guidebook. This contains a tour of the castle inside which you can follow. It provides far more information than the boards and leaflet, resulting in a far more positive experience. Be aware, however, that the guidebook is fairly technical in places, particularly with architectural jargon. 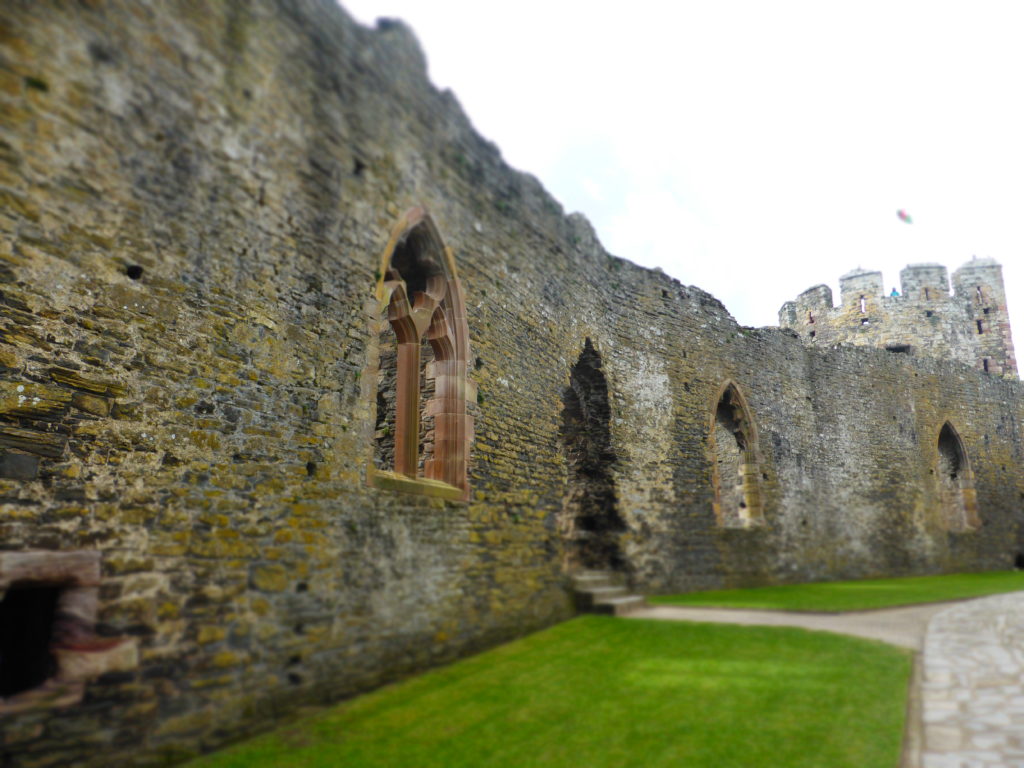 Overall, Conwy Castle is a site not to be missed. You should definitely combine your visit to the castle with a walk on the town walls. Plas Mawr, an exquisite Elizabethan house, is nearby. It could also easily be combined with a visit to Conwy Castle for a world-beating day out.

Have you ever been to Conwy Castle? What did you love about it?