It started out as a fantastic evening, but ended in catastrophe

So normally at this point, we review a recent concert or theatre show that we have been to. Unfortunately, the next show that we had planned to review was Ariana Grande at the Manchester Arena. Whilst the show itself was great, we are sure that you are all aware of the sickening events that occured at the end of the concert. Therefore, this post will be a little different than usual. Believe us when we say that our hearts are with everyone else who was affected by these tragic events. 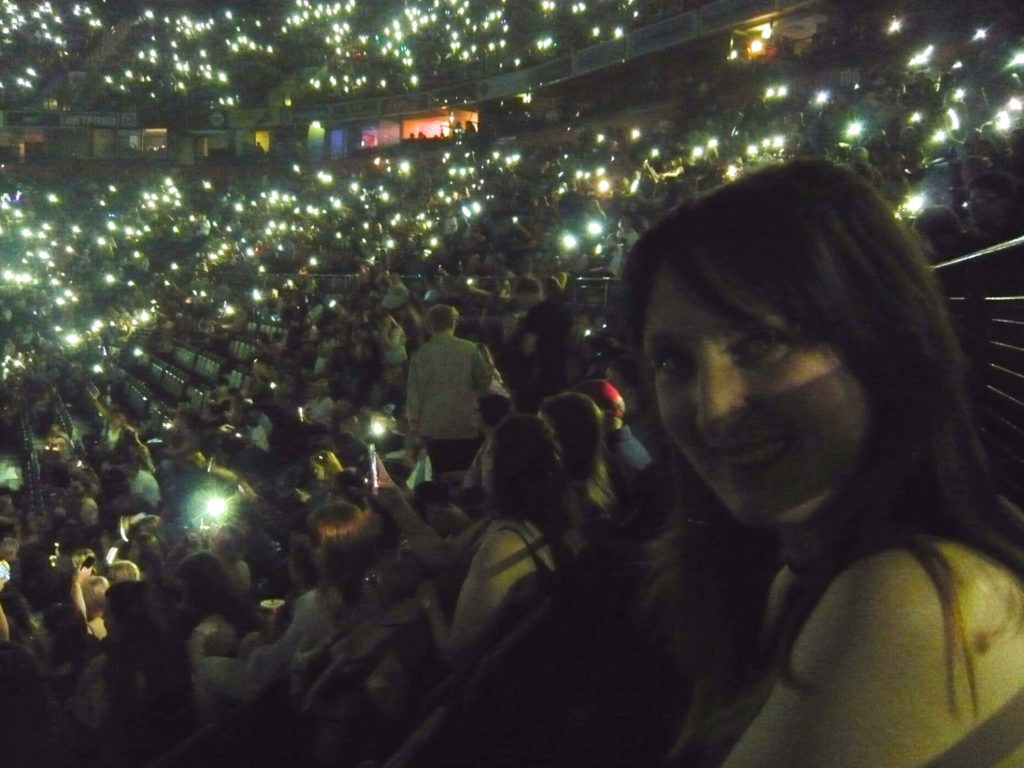 Just for a moment, lets talk about the concert itself. Ariana put on a fantastic show, belting out tune after tune. She sang her heart out for the audience, and the audience in turn loved her back. All around us were so many excited fans singing and dancing along to all of her hits. We even saw some people on the floor seats holding up A4 pieces of paper. It clearly had some sort of message for Ariana, but we could only see the back. We’d love to know what it said. 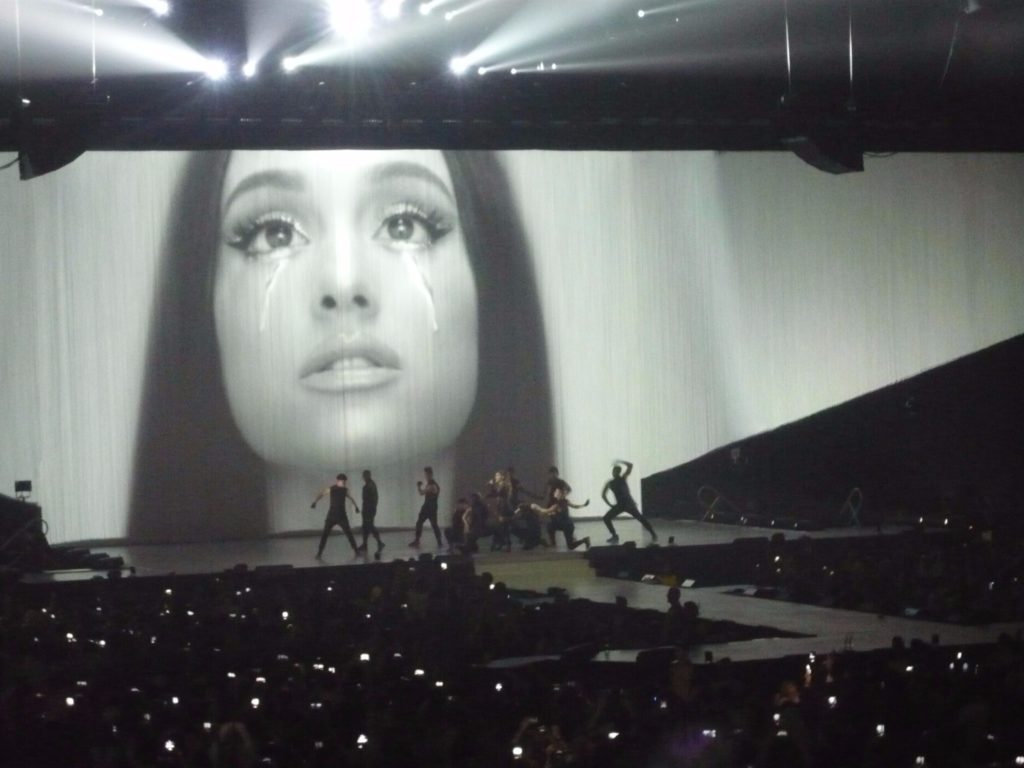 The fans were also entertained when fake money and pink balloons fell from the ceiling on separate occasions. The fans on the floor seats grabbed the balloons and placed the lights on their phones underneath them. They looked like pink lanterns. Ariana went off three times to change costumes, introduced her band, and her dancers showed off their best moves. After the final song of the night, she waved goodbye to the crowd and disappeared behind the curtain at the back of the stage. 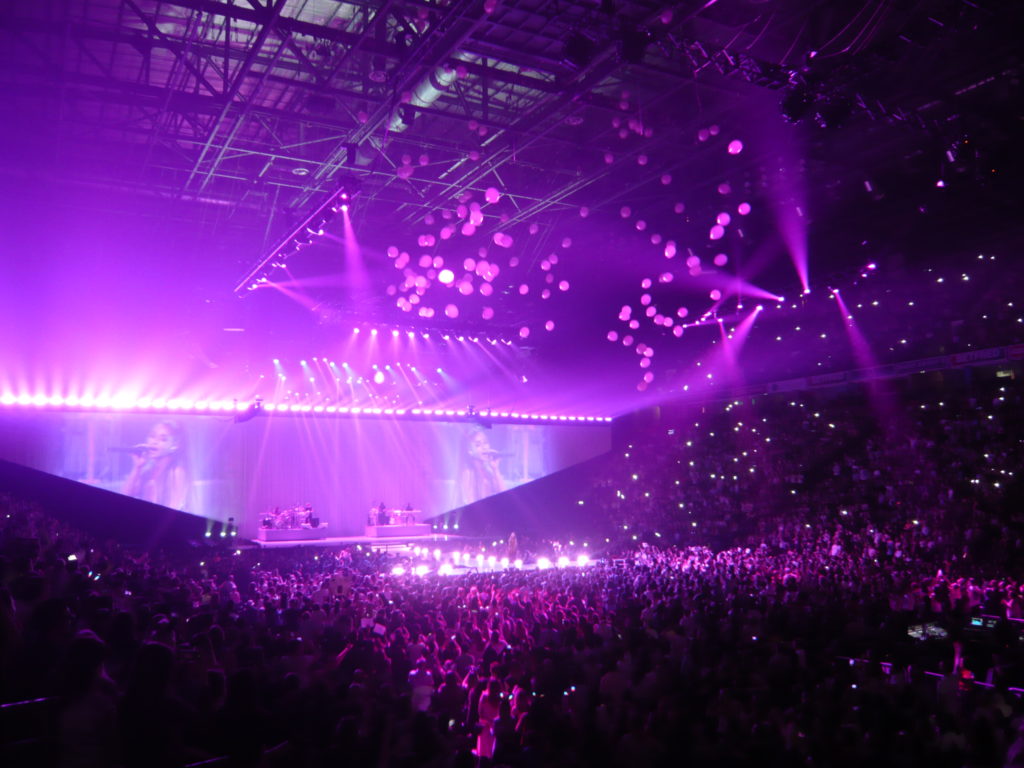 Heading out of the arena anxious to get going

Like many others, we had made it out of our row and nearly to the top of the staircase that led to the concourse. The concourse is where all of the food and drink vendors, toilets and various exits are. By now, the lights had just come back on. Anxious to get out as we had a long journey back to Stoke-on-Trent ahead, we shuffled up each step with the rest of the crowd. All of a sudden, we heard and felt a loud, deep booming sound. The floor shook, and the vibrations went through our bodies. We both instinctively knew it was an explosion. However, we didn’t have much time to think about what might have caused it, or if anyone was nearby it. The whole thing was one of the scariest moments of our lives.

After the boom, there was a few seconds of horrified silence from the whole audience around us. Everyone was dumbfounded. We all wondered what it was, and what we should do next. We were still in the arena. The moment of panic soon became all the more real. We heard piercing screams from the large group of mostly teenage girls ahead of us. They came running back into the arena from the concourse and ran across the aisles to our left. We started to move very quickly, fearing a gunman might be on the loose or some other such atrocity. It was clear that we had to get out of there. As to what was the safest route, we couldn’t be sure.

We had no idea what was going on, but knew it was awful

We made our way over about three or four blocks to the part of the arena closest to where the Trinity Way exit is. It is part of our routine to check where this exit is in relation to our seats, since we tend to park the car over there. The exit we were originally heading out of was the closest one to the main foyer, and the train station. We had to think quickly, and decided to make a run for it. As we headed up the stairs again, a group of terrified teenage girls ran across and in front of us. We followed them out, not knowing what exactly we were running from.

As we ran across the concourse to the exit, we both inhaled some kind of smoke that burned our throats. All we could do was focus on the exit, and keep going. Literally, we were just taking a leap of faith, and didn’t dare look back. We held hands the whole time, so that we wouldn’t lose each other in the confusion. Once outside, we ran down the street to get back to the car as soon as possible. It was horrible seeing teenagers running from the arena and crying. Parents were frantically trying to call their children in order to find them in all of the madness. We heard sirens in the distance, both police and ambulance. They were getting louder, and clearly heading to the arena.

What had just happened?

Once at the car, we made a quick decision to drive away from the direction of the arena. This was despite this being the wrong direction for us, and not knowing where the road would lead us. Our instinct just told us that we should just get out of Manchester as soon as we could. We frantically tried to find out what had happened. Most people were speculating that it was one of Ariana’s pink balloons that had popped, and made people panic. We knew it wasn’t true, but hoped that it was something less terrible than a terrorist attack. It wasn’t until we were well away from Manchester and on the motorway that we discovered that our worst fears were likely true.

The details hadn’t come out of course. However, there was word of a ‘serious incident’, and we passed emergency services contantly heading in the opposite direction to us on the motorway. Over the coming days, we have been in a complete state of shock. We found out when we got home that people had lost their lives. The bomb detonated in the area where we were about to emerge from the arena into. Whilst the exit isn’t the one we planned to use, we have often just taken it to avoid fighting against the crowds. It was almost impossible to settle, and we eventually cried ourselves to sleep.

We have read, and cried, about the tales of bravery and the beautiful spirit of the people of Manchester. Not to mention how amazing the emergency services have been during all of this. Thank you all so much for showing the whole world that Manchester will not be broken. Through thick and thin, the city will stick together.

Genuinely, we live in a planet full of love, with a few exceptions. These few may have lost the love in their hearts. However, they will not stop the rest of us from stretching our hands out to each other and offering help whenever it is needed. To all of the families grieving after losing their loved ones so soon, know that we, amongst many others, send our deepest sympathies. They might just be words, but know that we mean it from the bottom of our hearts.